If there’s one complaint that I tend to have about the modern video game industry — well, one among several others — it’s that we seem to have given up on creating more kid-friendly major games. It might be an exaggeration, but at times it only feels like the only focus given to games aimed at kids is reserved for Nintendo’s various franchises, Skylanders games and whatever licensed Lego game is coming out next. So when something as bright, cartoonish and perfect for children and gamers of all ages such as The Swords of Ditto is announced, you had best believe that a spotlight should be placed upon it, especially for something this fun and addictive.

A Zelda-esque action RPG from Devolver Digital and developers onebitbeyond, The Swords of Ditto sees you washing ashore on a mysterious land, whereupon after being led into town by your new insect guide, you grab the titular sword from the statue commemorating the village’s previous hero and become the new hero yourself, and now set out to save the land from the evil Mormo. In terms of setup and gameplay, it may seem a bit standard, but what immediately sells everything here is in the incredibly gorgeous, hand-drawn artwork with an abundance of vibrant colors and detail that makes it feel like a playable cartoon, filled with eccentric creatures such as bathing octopi and giant, mustachioed cats. Heck, with a bit of dialogue in one of the museums suggesting a past apocalypse, you can almost call this the best unofficial Adventure Time game. 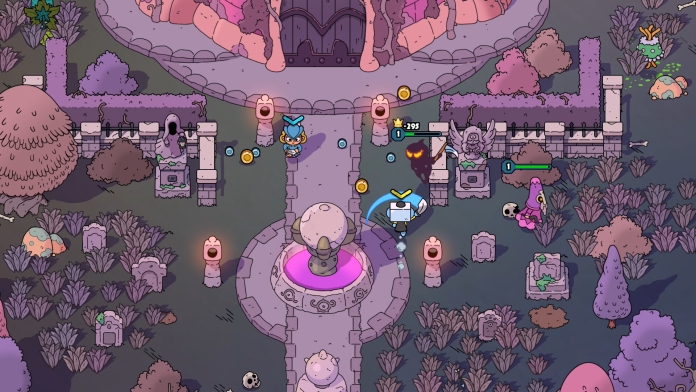 Indeed, there’s a high level of whimsy when it comes to the world of The Swords of Ditto, and not just due to the game’s colorful graphics. I mean, this is a game where traveling between waypoints is done via air kazoo. It definitely has the feeling of a fantasy setting actually crafted by kids, where enemies can be defeated with blasts from super soakers, treasure chests can contain chocolate bars and cookies as means of regaining health, and upgrades are gained via various stickers that you collect. But at no point does it all ever feel too immature, instead hitting the right amount of charm that actually makes you feel just like a kid again while playing it.

The action you encounter along the way is handled perfectly as well, with combat being nice and simple, giving you a wide variety of weapons to work with, including golf clubs, flying discs, maces, and even giant gorilla feet that you can summon out of the sky to stomp your opponent into oblivion. You can equip four at a time, mapped to your directional pad, making it easy to select one while the energy regenerates on another. The tricky part is in trying to come up with a well-rounded enough armory in order to have something that works against an enemy’s weakness and strategy when you need it. But a unique part of the gameplay, though, is that your death and/or success creates the legend that influences the next time you begin. Defeat a monstrous threat, and things will be sunny and prosperous. Lose to Mormo, and things turn dark, with an air of despair among the people. It is a particularly wide and open-ended game where you can do nearly anything in whatever order you want (the length of the demo can attest to that), encouraging you to forge your own tale for the books. 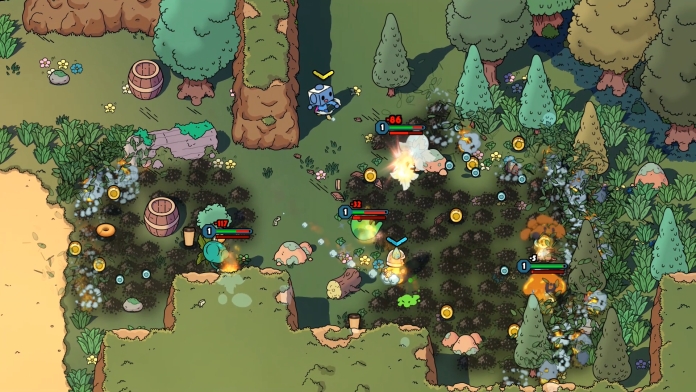 It bodes well for The Swords of Ditto that the lines to play it were quite lengthy, because it’s the type of feel-good game we need more of and that deserves more attention, one with an adorable style and gameplay that’s easy to learn for younger gamers, while still having the perfect level of challenge and depth that appeals to the older crowd. And given the game’s co-op mode as well, it even makes for an enjoyable romp for not only just friends to play together, but maybe even for parents looking for something appropriate to bond with their children over. I know the emphasis on being kid-friendly here may come off as a bit corny to some, so let’s just leave it at the fact that this is shaping up to be a truly excellent action RPG for all and you should keep your eye out for it when it comes to the PS4 and PC in 2018.