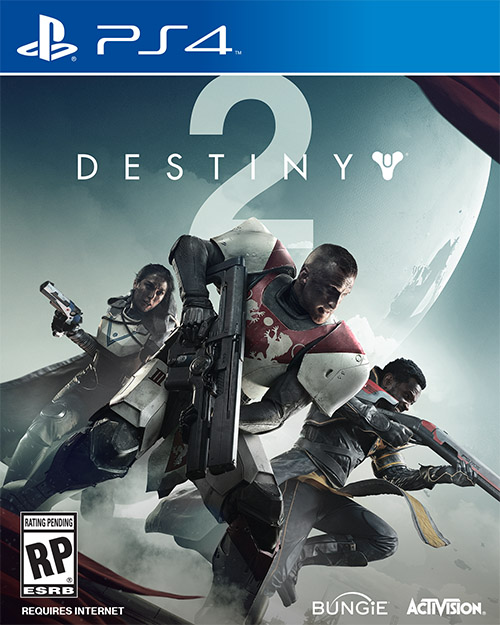 Assassin’s Creed II, Uncharted 2: Among Thieves and Mass Effect 2 are some of the greatest sequels of all time, but why? Each of these games had a flawed predecessor that showed great promise, which the developers were able to take and refine into strengths. With Destiny 2, Bungie is looking to achieve something similar. After three years of growing pains throughout the Destiny 1 era, the developer is finally ready to look to the future with a numbered sequel. With an actual campaign, new worlds to explore and an update to the game’s progression systems, is Destiny 2 the sequel fans deserve or is the number at the end warrantless?

The campaign kicks off with a bang. Returning home to The Last City, you and your Ghost discover that the city has come under siege by the Cabal Empire’s Red Legion. Led by Dominus Gaul, the Legion successfully captures the Traveler, cutting off all Guardian’s connection to the Light. Without Light, you must become the rallying point for all surviving Guardians, re-unite the Vanguard and retake what Gaul has taken from you.

The most significant aspect of Destiny 2’s campaign is that it has an actual campaign. After Destiny and Rise of Iron’s cookie-cutter missions, it’s nice to have something with more variety and substance than “bad guy over there, go kill it.” That’s not saying Destiny 2’s campaign is anything deep. Characters jump in and out of the campaign quickly as the story moves you from world-to-world. While the quick pacing keeps things moving, it never slows down enough to create any connections between the player and the world. Worst yet is the player’s Guardian who, in Destiny 2, is relegated to a silent protagonist. Ghost ends up speaking the entire time for the player and comes off as annoying. The current set up with the Ghost quickly becomes grating, and even more annoying when other characters point out your silence. This was purposefully done so that players can become invested in their Guardian, but in execution comes off as cartoonish. 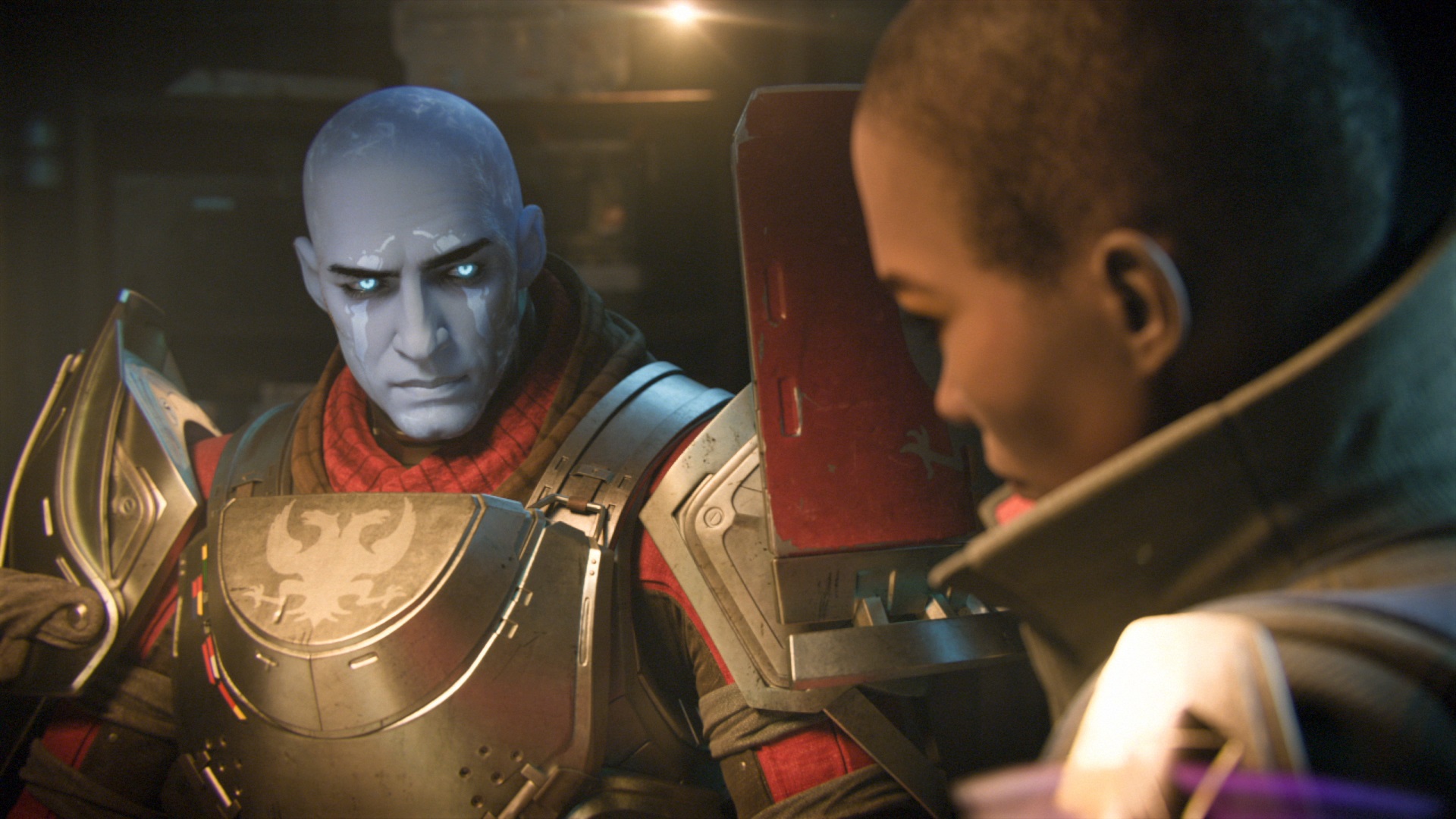 What is surprising is the antagonist, Gaul. Presented in trailers as a hulking brute, Gaul appeared to be a walking cliché. The end product is the complete opposite with Gaul having much more depth than anticipated. Gaul doesn’t get the amount of screen time he deserves, which is disappointing considering he’s the best part of the story.

Completing the campaign can last anywhere between 6-8 hours, and that time is mostly filled with well-written and varied missions. Sure, some cookie-cutter missions are just there to pad out the length, but for the majority of missions, there’s more than enough context and agency to keep players going. One mission you may be driving a vehicle, in another you’re escorting a valuable object and then you may be teleporting around areas to save a friend. There’s a lot more variety on display in Destiny 2’s missions.

Destiny nailed its gameplay mechanics perfectly out of the gate and those carry beautifully into Destiny 2. Aiming and shooting feel fantastic, while platforming has been tightened up with Guardians now able to clamber over ledges. Jumping is still a little floaty, but the clambering should help players avoid some unnecessary deaths. 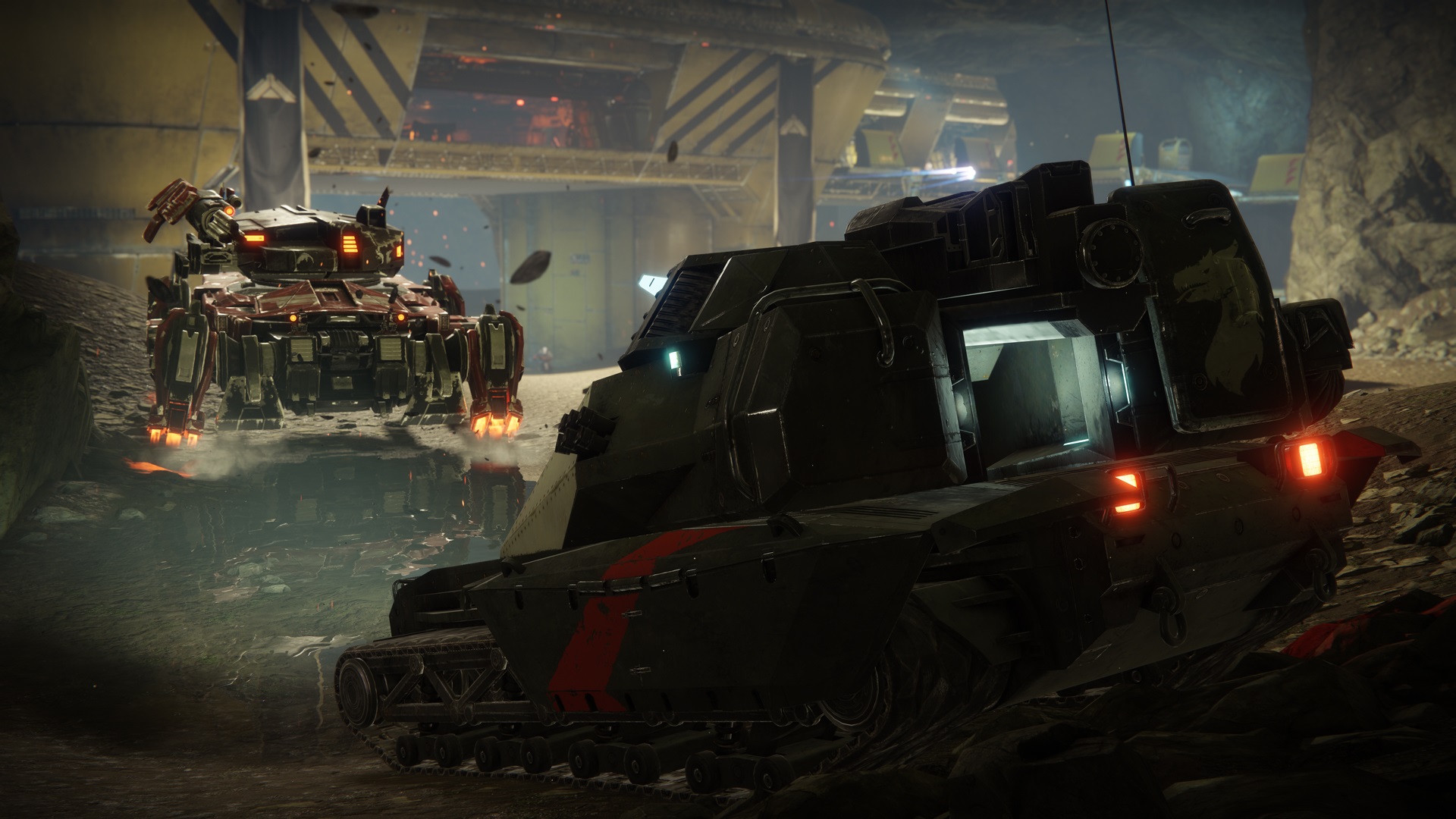 Much of the gameplay changes lie under the hood. Primary, Special and Heavy weapon classifications have been replaced with Kinetic, Energy and Power weapon classifications. While many may lament the fact that Sniper Rifles, Fusion Rifles and Shotguns have been moved to the Power Weapon slot, the changes made to the classifications are ultimately smart. Players now have more viable weapons to choose from, making it easier to melt enemy shields with Energy Weapons, pound unshielded enemies with Kinectic Weaponry and better control crowds with Power Weapons. New gun types like the submachine gun and grenade launcher are thrown in to add more variety and are quite fun to use.

While there no new classes, each of the three returning classes get a new subclass. Hunters get Arcstrider, Titans get Sentinel and Warlocks get Dawnblade. Each of the new subclasses is a joy to use and players can unlock their other Destiny 1 subclasses (Gunslinger, Striker and Voidwalker) and The Taken King subclasses (Nightstalker, Sunbreaker and Stormcaller) if the new ones aren’t their cup of tea. Each returning class has been tweaked to make them more viable in Destiny 2, and both new and old are fun to play.

A series of new locations on Earth, Titan, Nessus and Io replace the locales from the Destiny 1 era, and are mostly huge improvements. The open areas may not necessarily be bigger but are filled to the brim with more geometry, exploration, and activities. Returning activities like Public Events have been revamped to offer more engaging encounters, and new activities like Adventures allow players to dig deeper into the lore of the world. New Faction Leaders populate each destination, but they feel lonely and out of place. Exploring the open areas still feels too empty as the player count has not been increased, nor are there any other NPCs to interact with. Faction Leaders are a great start, but it’s disappointing that there isn’t more to the open areas other than to mine Lost Sectors and Public Events, walk up to a flag to initiate an Adventure or kill infinitely respawning enemies. 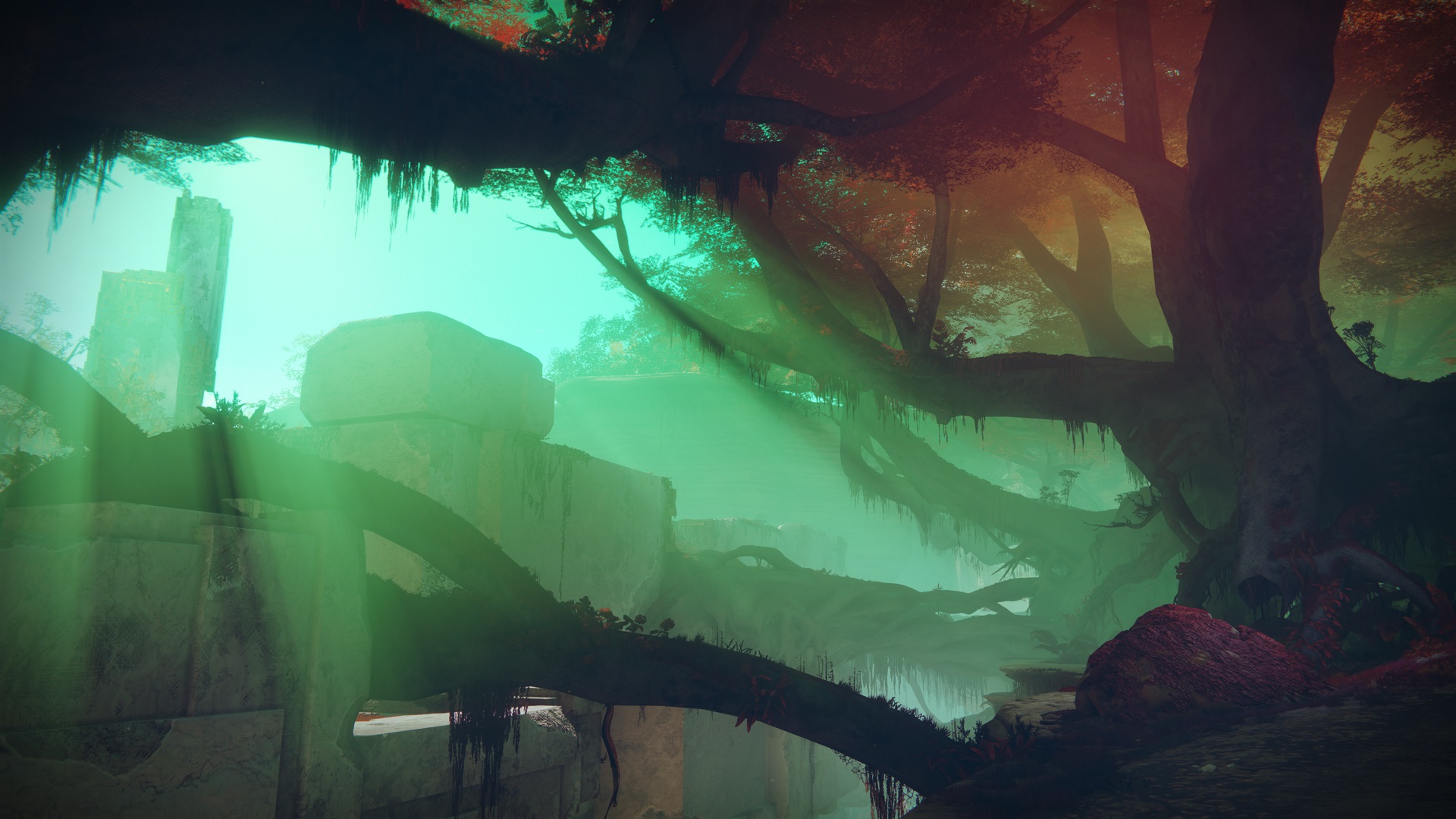 Speaking of enemies, Destiny 2 doesn’t add anything new to the mix. Each of the factions from the original game returns with a few new units, but they don’t change the fact that these are the same enemies we’ve been shooting for the past three years. Considering we’re exploring new, exotic worlds, it would have been nice to get some new enemy species thrown in.

The RNG system is still here but has been streamlined to be more rewarding. Faction Leaders regularly dole out Legendary items after you turn in enough Faction currency to them, which can be found by participating in activities in the world, playing Crucible, breaking down old items and participating in Strikes. All-in-all, it’s not much of a chore to get to a high Power Level to take part in the late game activities. What has been negatively impacted in Destiny 2 is a player’s ability to customize their Guardian and earn certain rewards.

Shaders, ships and sparrows, which could all be obtained as rewards in the Destiny 1 era, are tied to Destiny 2’s microtransaction system. Sure, common and rare shaders can be found be exploring the different worlds, but the most desirable shaders are all locked behind microtransactions and are now single use. It’s cool that shaders can now be individually placed on each piece of armor or weapon, but turning them into one-time consumables tied to microtransactions is terrible. Swapping shaders in and out in Destiny 1 was a fun piece of customization, but Destiny 2 strips that away. 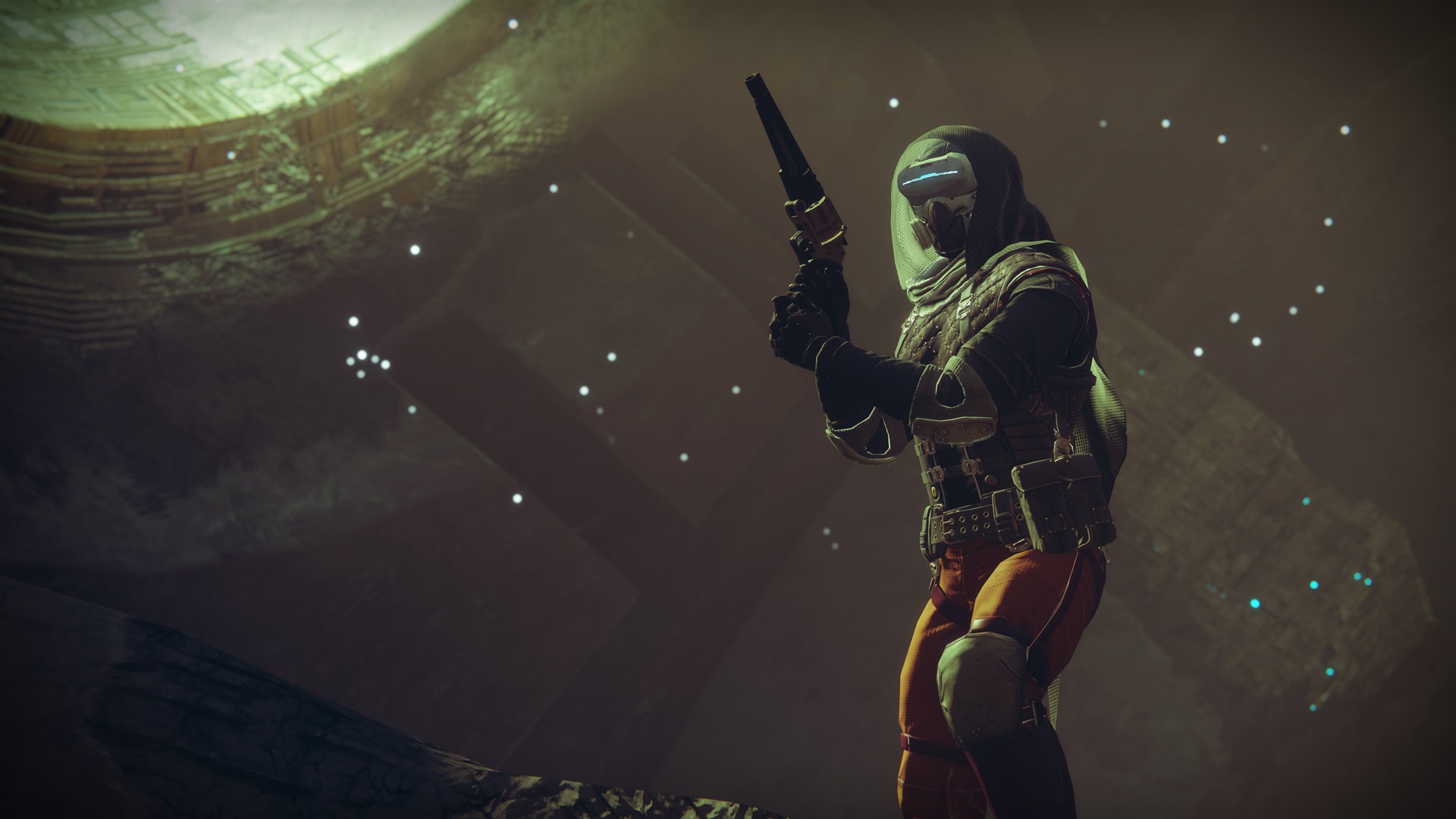 Competitive multiplayer returns in the form of Crucible, which has gone through extensive tweaks. Gone are the 6v6 matches, replaced with 4v4 matches. While this is a curious choice, the player count works rather well in-game. All multiplayer maps have been designed with this number in mind and it’s easy to find firefights. Playing Crucible is also more rewarding with loot generously dropped and Crucible Reputation tokens after each match.

There are a total of eight maps (nine if you’re playing on PS4), and five game modes. Supremacy, Clash, and Control are part of the Quickplay option, and new modes Countdown and Survival are part of Competitive. Unfortunately, there is no option to select the game mode you want once you select Quickplay or Competitive. If you really want to play Control, you have to hope that the game’s matchmaking doesn’t randomly throw you into Supremacy or Clash.

All activities in Destiny 2 can be played cooperatively, but the real test of a Fireteam’s comradery comes in Strikes, which Destiny 2 provides plenty of. There are five Strikes in Destiny 2 (six if you’re on PS4), and each is meticulously crafted to test a Fireteam. They’re far more exciting than the Strikes in vanilla Destiny and dole out some quality loot. Those looking for a challenge and some of the top-of-the-line loot will want to try the Nightfall, however, which is unlocked later in the game. 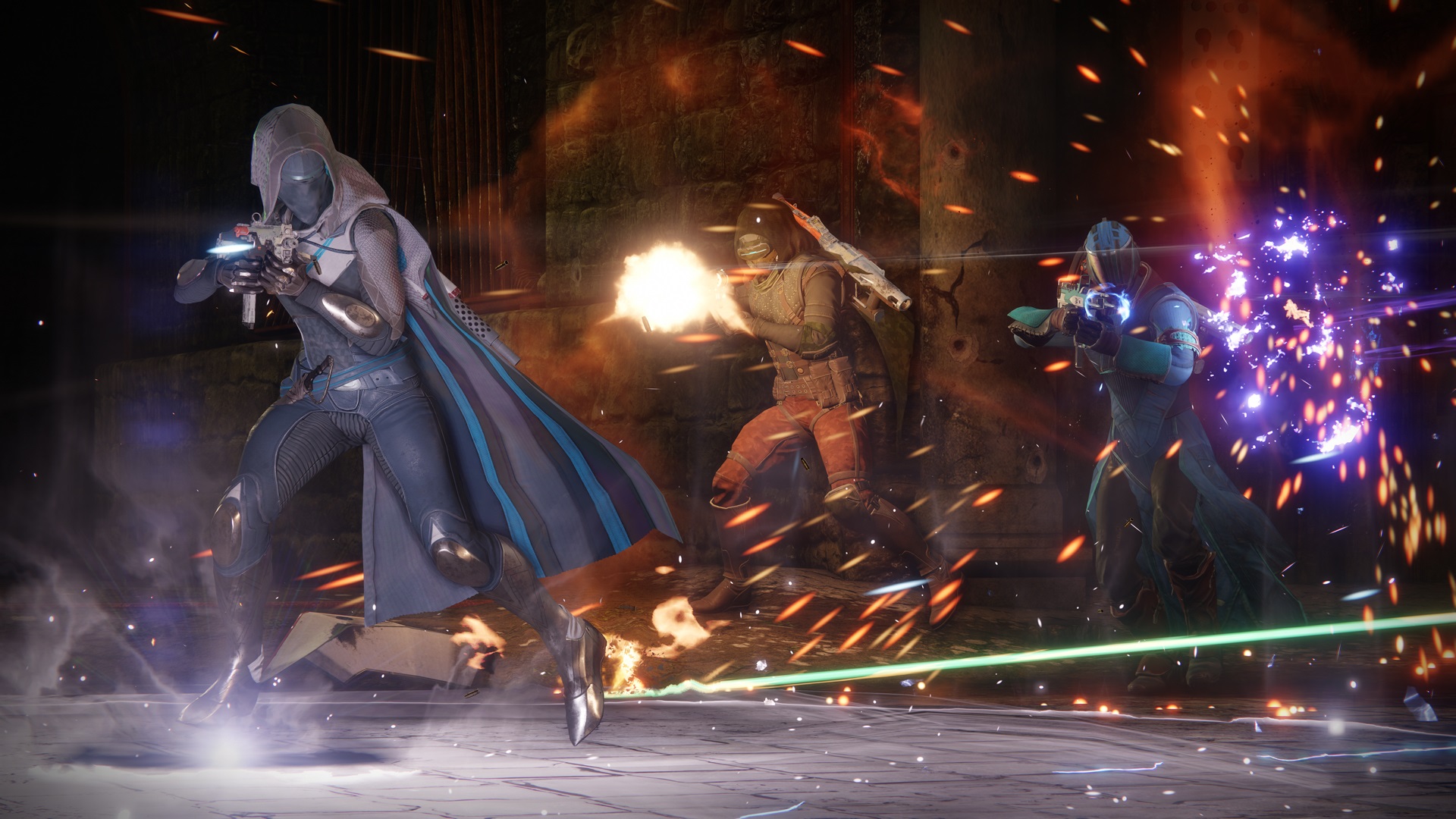 Destiny 2 astounds with its fantastic art direction, presenting worlds that are bigger and more detailed. The European Dead Zone and Nessus, in particular, are meticulously crafted worlds filled with wild vegetation, towering trees, and flowing rivers. Effects, lighting, and animation work are also top-notch, helping to make the world of Destiny feel like a real place.

The writing and voice acting is mostly okay. There are still some cheesy lines, but there’s nothing as wacky as, “that wizard came from the moon.” While the majority of voice actors deliver fine performances, it’s Joy Osmanski’s Failsafe that ultimately steals the show. With excellent comedic timing, Osmanski delivers the best quips of the game and makes Nessus the most fun location to visit.

Destiny 2 is what Destiny should have been, but it’s not what a sequel should have been. That isn’t to say it isn’t fun; in fact, the world of Destiny has never been more entertaining. Destiny 2 successfully adds plenty of quality of life improvements that make the game less of a grind. An in-game map, Faction Leaders and Public Event tracking make the game more rewarding. An actual campaign, a good amount of Strikes, the Crucible and a plethora of side activities ensure that Destiny 2 will remain in your console’s disc-drive for a long time. In other aspects, however, Destiny 2 feels more of an expansion than it does a sequel. The lack of new enemies is extremely disappointing, which means another few years of fighting enemies we’ve already fought for the past three. While the new worlds offer more spectacle and detail than anything in the Destiny 1 era, they still feel empty without NPCs or an increase in the player count. Then, of course, there are the microtransactions, which gate the franchise’s best customization option behind either a paywall or, if you don’t want to pay, excessive grinding for Bright Engrams. Still, Destiny 2 is fun. It may not be the huge sequel that initial leaks made it out to be, but it’s still more Destiny, and this time it’s far more refined and rewarding.