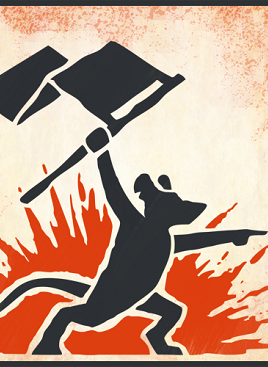 “War… War never chang…” excuse that, war does change, and developer Pocketwatch Games is here to prove it with Tooth and Tail. Tooth and Tail is a plain and simple RTS with an outstanding core idea that changes the genre for endless amounts of destruction and fun. While most RTS are focused on building up enough resources, protecting those resources and then executing the enemy with a sizable army, Tooth and Tail manages to get rid of that idea almost entirely. Players will have to outwit, outsmart and outlast their opponent whether it be in the story mode or during competitive play.

Tooth and Tail stands behind one core tenant: “the player’s flag bearer is everything.” It’s with this in mind the player will be controlling the battlefield. Who is this flag bearer that needs protecting? It’s one of the leaders of the four playable armies, and the world matched with the character design is outstanding in its own way. Instead of humans vs humans or humans vs aliens, Tooth and Tail is instead inhabited by an anthropomorphic society of lovable war-torn animals. What looks cute on the outside is instead a bloody conflict of civil war that is all too familiar to our own history books.

In the beginning, there was a civil war, and this is where Tooth and Tails story starts. Like any good RTS it’s important to play through the story to get a basic handle of the game. The story will guide the player through every possible scenario it has to throw at them and Tooth and Tail makes sure they know what they’re in for. Tooth and Tail wants to be understood, being devoured ravenously like the great feast that only the Civilized wait for (reference will make sense). Jumping into the story mode of Tooth and Tail, the player is greeted by a powder keg of a civil war in the midst of exploding. Taking on the role of Bellafide, the leader of the Longcoats who have become fed up with the state as it is (the Civilized feasting on the Longcoats meat),  it’s now his sole purpose to rise up against this unjust society. Put simply, this is the exact opposite of any Disney or Pixar film where the animals live in harmony. No, the creatures that occupy this world embrace their instinct and due to this animalistic mentality of a food chain, it’s a part of society. It is also the driving resource for the entire game: food means wealth and wealth wins wars. This is the perfect conflict for a civil war and gives Tooth and Tail all the ground it needs to have battles of massacre play out across the theater. 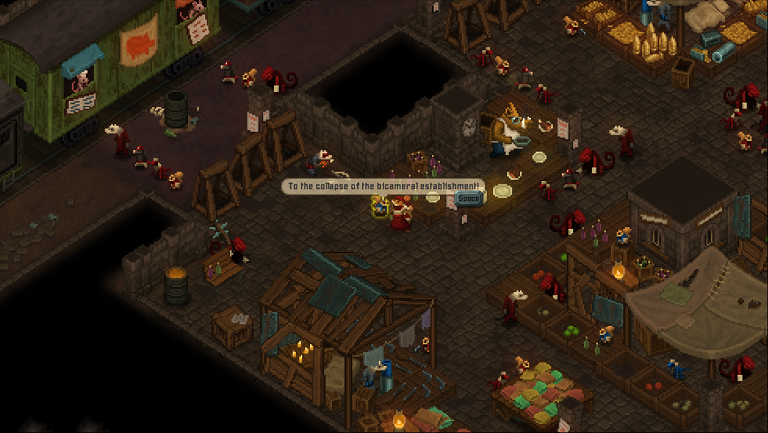 As the story unravels itself, each leader will eventually be introduced and a bit of who they are will be revealed as well. Each leader comes with their own HQ appropriate for who they are and what they represent, fueled by an army more closely resembling a menagerie of animals unique in their own ways. This writes the world in such a way that is both entertaining while also bringing a firm social commentary through adorable means.

What do these leaders have to offer, though? Four opposing armies that inhabit the world — the Longcoats, Commonfolk, KSR or Civilized — choosing one from the other has no beneficial means. Instead it’s a completely aesthetic choice, and while it might have been a nice feature to have unique abilities tailored to each army, it seems Pocketwatch Games took this in to mind and wanted a level playing field. This hearkens back to old school RTS like Command & Conquer where the only real advantage was player skill. Sure, the opposing force might have a unit that is a bit OP in some way, but Tooth and Tail hinders this with its faced-paced nature. It’s instead about focusing on the units at hand and using them in the wisest way possible. There’s enough diversity among units that there is no shortage of combinations for winning the battle but not the war. 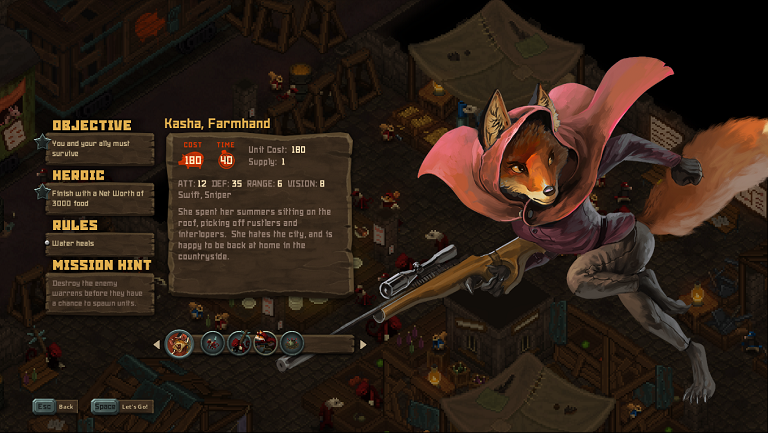 Progressing the story, the difficulty curve ramps itself up vehemently in outstanding fashion. Each mission moves the story of feast and fodder along in a way that always leaves wanting more. Of course, falling into this trap only leads to new conflict that proves to test the player consistently. Each level comes equipped with a way to win the battle, a heroic opportunity like not building any warrens and a tip on how best to approach the situation. The units the player will be going in with will also prominently be shown with appropriate stats accompanying them. It makes going into battle simple without leaving guess work, each battle the player will know what they are in for, expect for one small hitch. Fog of war, a feature that comes with any good RTS, of course makes its appearance, but what’s different isn’t that the map isn’t covered, instead the map is generated for each battle. This means resource placement is different, enemy placement has changed and the topography of the field is entirely new each time. Tooth and Tail never wants the player to memorize a map, again falling back on using one’s skill to complete the task presented.

The story mode alone is a good fifteen hours long and the conflict is interesting in a wonderful way to keep the momentum going. Matched by the unique mission design, it can’t be helped but to see it through to the end. Tooth and Tail embraces the reality it’s presenting seeming to saturate the player in its world. Even though it doesn’t depict a history that is our own, it’s similar enough that it inspires the study of such history. It’s rich in eastern-European ethos in a way that looking up the history of such countries can’t be helped. It even gives pause to the speculation of everything it means to be part of a society, whatever the governance. 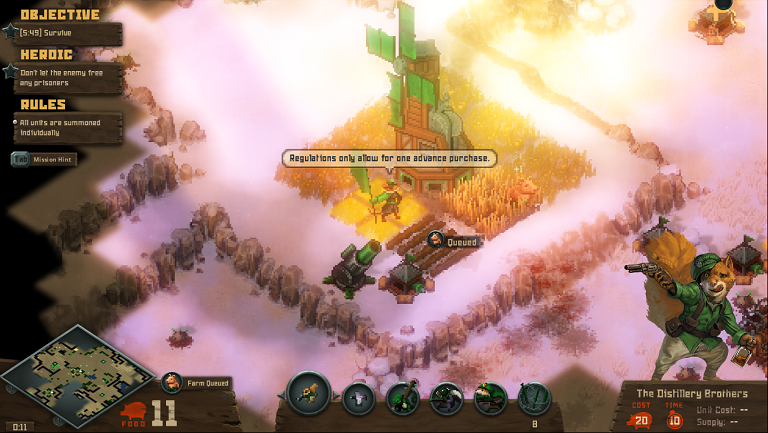 Taking it back to the battlefield, what can be expected is match after match filled with blood and conquest. The mechanics of Tooth and Tail are simple: the flag bearer (leader) is responsible for running around the battlefield looking for new gristmills to establish to gain more resources crop farms at said mills and then build units appropriately to attack or defend the opposing army/armies. Tooth and Tail takes example from its animalistic cast and moves with a ferocity that demands critical thinking from the player. The story alone presents challenges that will test any strategist metal. What comes off as simple design is actually a complex web of intricacies that complement one another perfectly. Nothing feels cheap and missed opportunities rest solely on the player. The only thing that comes off as a disadvantage are the maps being generated. This can lead to complications of not having an advantageous spawn placement to being blocked off by certain geologic features.

The flag bearer is always the most important unit, for without a flag bearer, nothing will happen. Not only is the flag bearer responsible for uncovering the battlefield but also building everything and moving units around. Units can be moved individually or as a group centralizing on the flag bearer’s location, even having the ability for full on retreat. Flag bearers come equipped with the burrow ability that allows them to quickly access a base if in need to build something or finding themselves in a dire situation. While it isn’t recommended to have the flag bearer die, it’s also not permanent, with a spawn time going off like everything else in the game. The only way to lose a game of Tooth and Tail is either by not completing the objective or losing all of one’s gristmills. 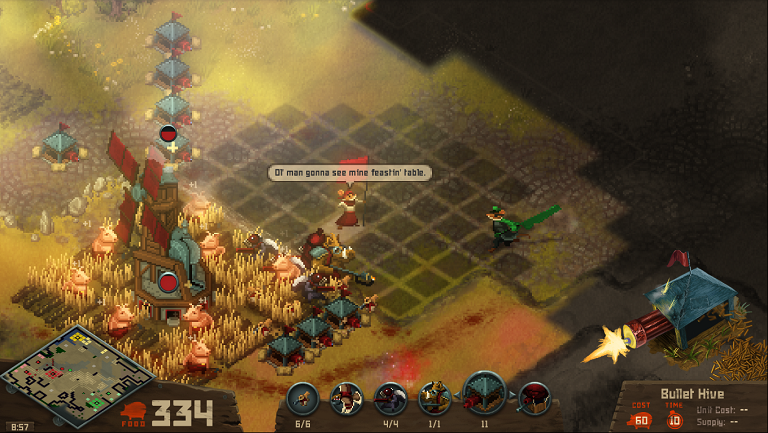 This is what gives the game its fast paced nature, having to consistently run around knowing the enemy is doing the same thing. It’s extremely common for the enemy flag bearer to run into one’s territory, and the player should learn from this. It’s important to always understand where the enemy is what they have for units as well as resources left. While the gristmills can produce resources, they come with a finite number, which means constantly being on the move or overpowering the opponent before they can get the advantage. It cannot be stated enough that there really is an endless amount of ways to approach each situation.

If story mode doesn’t showcase this enough then jumping into multiplayer certainly will.. Instead of preset units that each army comes equipped with or might be seen in the story, it’s completely up to the imagination of what army one wants to lead into battle. Aside from picking a favorite flag bearer (long live Hopper!), this feature might be the best. It allows for trying out endless combinations that any player will enjoy. The versatility to create a perfect army is going to go a long way, ensuring no two battles should be the same. It also means when playing matched play teammates can fill out for each other what the other might be missing or wanted. The units range from grunt infantry –squirrels, explosive frogs and the like –to medium units like chemical warfare skunks or birds with machine guns. Finally, there’s the heavies, individual units that excel in their own way, which range from a flame-throwing boar to a sniping fox. Equipment also makes an appearance, such as pillboxes, sniping balloons and even barbed wire/landmines. All of this combines for robust play that is endless fun.

Tooth and Tail excels at the core game of an RTS, but it’s hard to walk away from it without talking about the art style. The game is presented with gorgeous hand drawn art for each individual unit that brings the world to life even more while the graphical gameplay is a classic 16bit era style that matches perfectly the size of this world. Everything is small and cute, but also bloody and conflicted. Somehow Tooth and Tail has found a perfect balance between grit and shine. Even the levels showcase this, ranging from foggy morning forest or wind swept tundra’s meant to freeze to the bone. Its art style presents the world in a way that can be digested realistically and from a gaming stand point. The music of course matches all of this as well, giving a sense of stately loyalty…or is it oppression? Either way, Austin Winatory’s score is a great accompaniment for Tooth and Tails’ art direction. 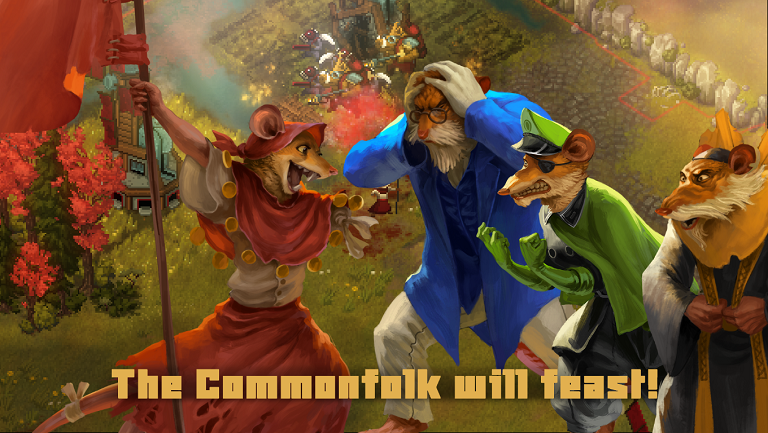 Those looking for a hot new strategy game should look no further than Tooth and Tail. Providing endless amounts of fun with fair and fast-paced action, Tooth and Tail fights tooth and nail for its place in the RTS pantheon. It proves that innovating on an old school genre is sometimes the best thing needed. This doesn’t mean other games have to follow this design from here on out, but it shows that things can be done differently while being immensely enjoyable.