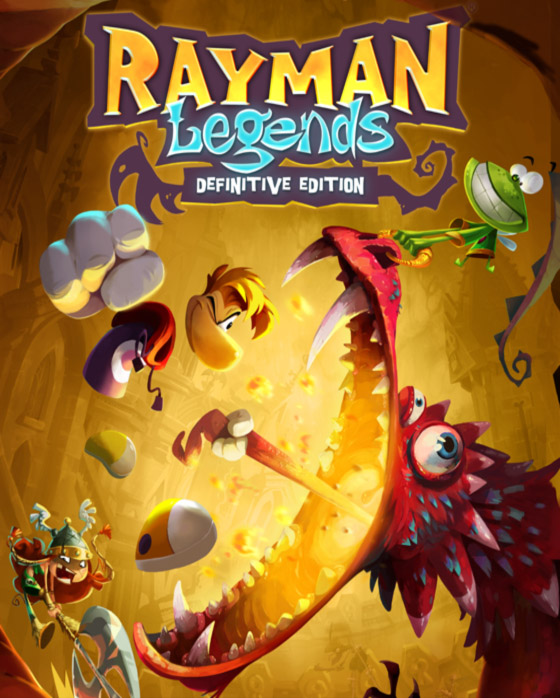 Who would have thought we’d see yet another port of Ubisoft’s fantastic platformer, Rayman Legends, so long after its initial release? While it seems like a game that could still hold up in 2017, it’s remarkable that the limbless protagonist would see even more time in the limelight. With Mario Odyssey still over a month away, those with Nintendo Switches have been getting spoiled as of late with classic franchise entries such as Sonic Mania and now Rayman Legends. Ubisoft has brought over the award-winning game to the console-handheld hybrid in hopes of introducing yet another new set of players to the lovable Rayman franchise. Has the last four years treated our unlikely hero well or has the Ubiart game aged poorly in the time off?

Rayman Legends picks up where Rayman Origins left off. Exhausted from quashing the great uprising of Granny of the Land of the Livid dead, our heroes did what any true heroes do — take a giant nap. Unfortunately, the old proverb of “you snooze you lose” is proven accurate, as the nightmares from Bubble Dreamer take over the Glade of Dreams as they slumber. Now it’s up to Rayman and company to once again defeat the evil that has awoken and save the Glade of Dreams. Besides the ending, that’s about the entire story of the game, as the characters that do talk only say a few words and any cinematic is there for humorous purposes or to expand on the level. Rayman is joined on his quest by Globox, King Teensy and, making her franchise debut, the Viking Barbara. There are also multiple heroes that can be unlocked by collecting lums throughout the game, all of which are variants of the original four. While not drastically different, all of the heroes have their own special charm and quite a few are hilarious.

Besides some minor tweaks, the base gameplay of Legends is identical to Origins. In Origins, stems could be pulled out of the ground that shot out lums trapped in bubbles, quickly rising off the screen. This has been replaced in Legends by enemies who are easily whacked for some lums. As it could be annoying for completionists to have a few lums float off screen, it’s a welcome change. Another tweak is that the hidden creatures in cages in Origins were Electoons, but are Teensies in Legends. The only other noticeable change is that levels in Origins were usually separated into multiple areas blocked by an eyeball, but are now one huge area in Legends. While it’s a tiny list of changes, Origins played exceptionally enough that there really isn’t much to improve. B jumps, Y hits, ZR runs and there’s a few other moves that can be done with those buttons in combination with the control stick. While simple, the controls hearkens back to the days of classic platformers where there wasn’t more than two face buttons on a controller. What makes the game so fun is the environments that those few moves must be utilized in to survive. Level design is nearly flawless and makes jumping around and bopping enemies rewarding and challenging in all the right ways. 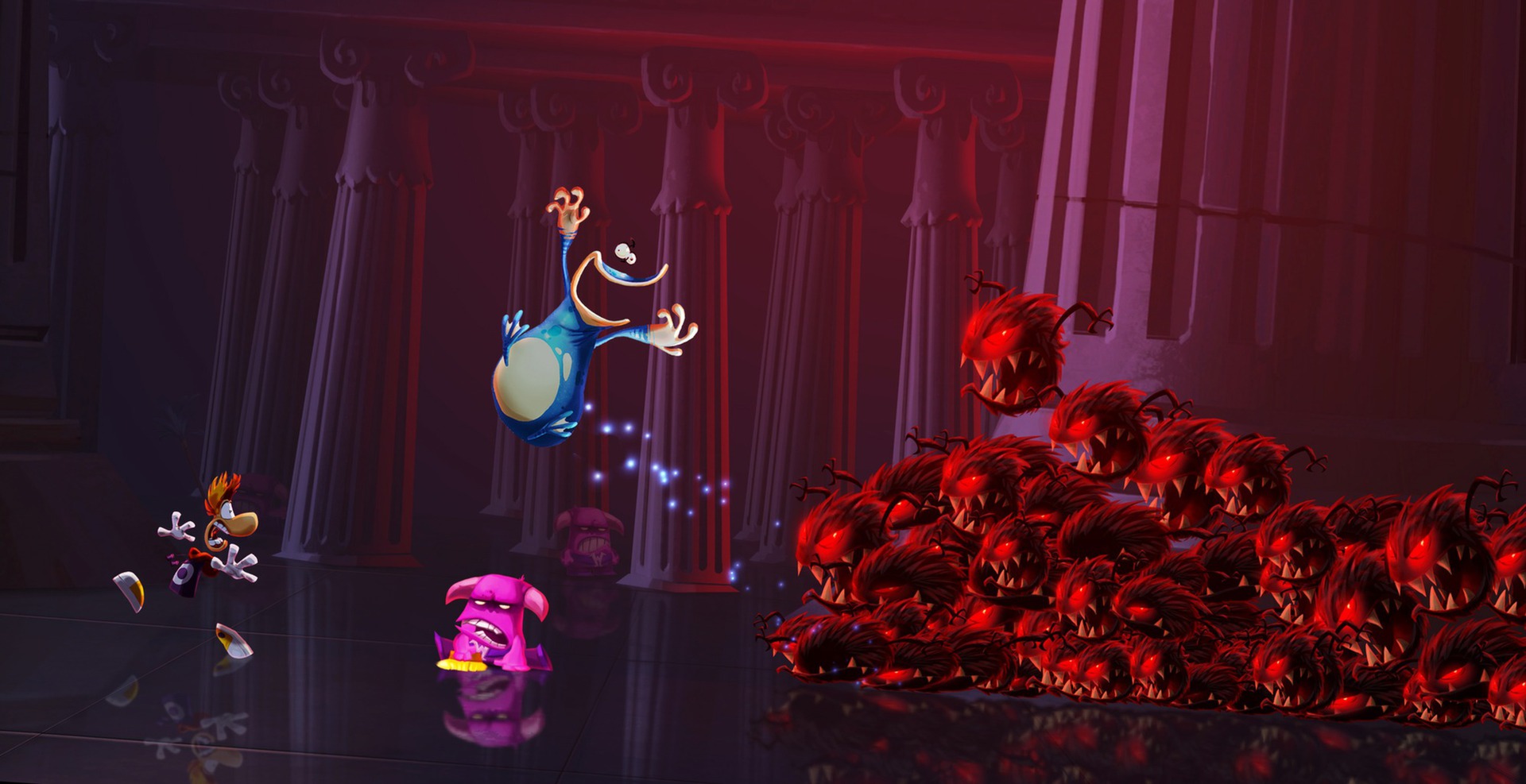 The most notable addition in Rayman Legends is that of the touch-based levels. These levels, which probably account for around twenty percent of the new stages, are entirely controlled on the Switch touchscreen and gyro sensor with the help of Murfy in his most prominent role since Rayman 2: The Great Escape. These levels are essentially endless runners and similar to the recent mobile title, Rayman Jungle Run. While putting endless runner mechanics into a major console game would usually be cause for alarm, they mesh perfectly with the Switch and help break up the (still glorious) monotony of the standard levels. The stages are generally solved by cutting ropes, creating passage ways and subduing enemies as Rayman does his thing. They’re a bit simplistic at first, but eventually grow to be fiendishly difficult, requiring absolute precision, memorization and concentration to complete. As good as these are, they’re not as fulfilling as the standard levels, but their presence can be looked at like this: with eighty new levels, taking them away completely would have left around the sixty-six levels Origins offered. There’s still a massive amount of platforming without their inclusion, so they should be thought as s a very entertaining bonus.

While the gameplay is near pitch perfect, what makes this reimagined series so endearing are the stunning visuals and outstanding level design. Running off the same Ubiart Framework that Origins did, the game looks just as beautiful but even more eye-popping. It’s looks as if Origins was a standard definition single ran through an HD cable box, so crisp that it no longer looks hand drawn, but now like a beautiful modern cartoon come to life. Playing the game on a high end 60” plasma or the six inch Switch screen revealed one of the most artistic and eye-popping games this reviewer has seen, with the game looking like a beautiful paining any time the controller was put down. Not only is everything bursting with colors, but it’s imaginative. Fiesta De Los Muertos, for instance, is full of pink centipedes, spanish-inspired skeletons and gigantic luchadores. There’s parachuting toads that hum Rise of the Valkyries, gigantic dragons and jacked gorillas just to name a few. One of the best sequences involves an evil clan of Teensies who when individually defeated, get shot up into space, landing in a planet’s crater, only to be played like a musical instrument by its inhabitants. 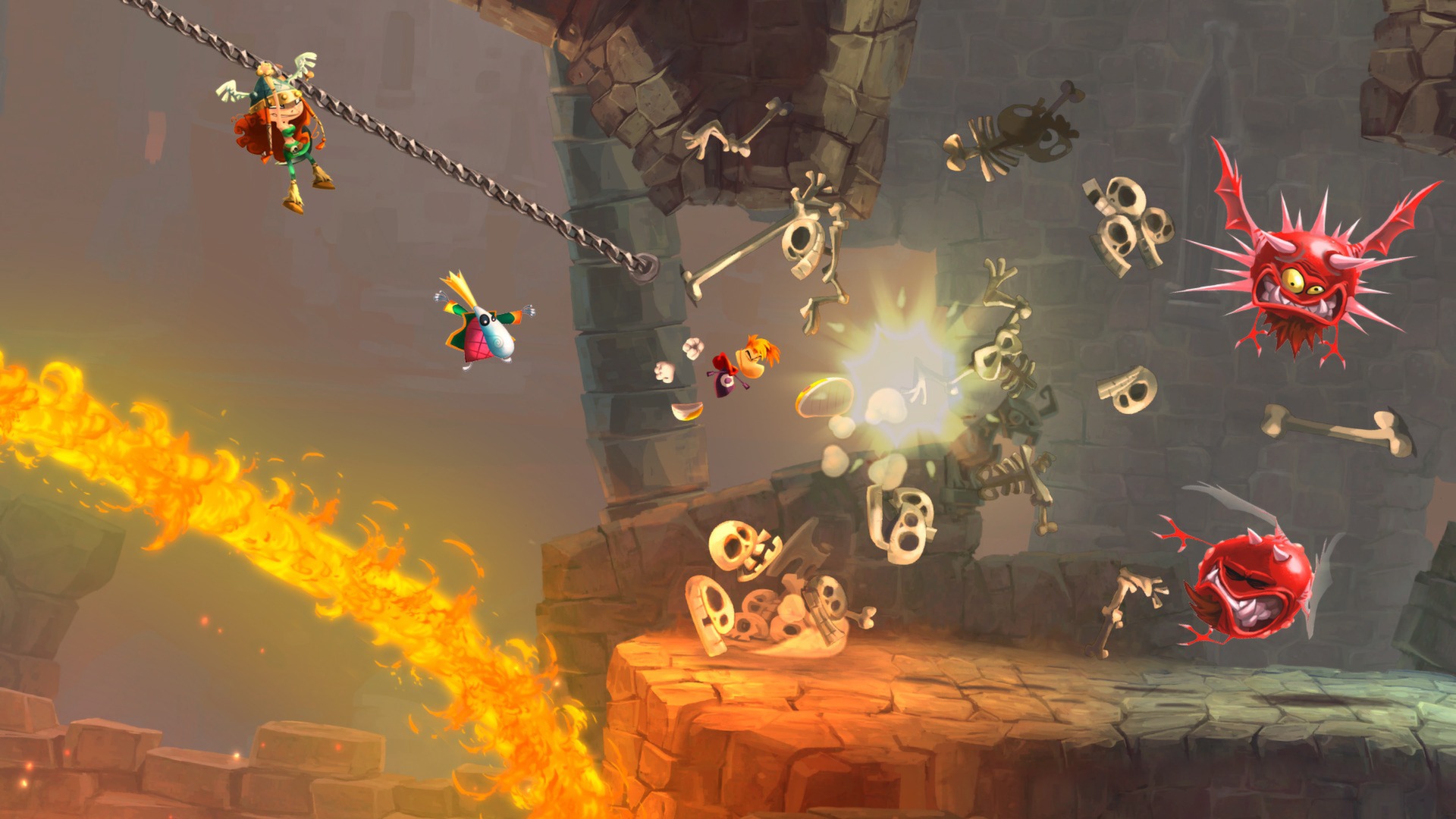 By far the most inspired addition is that of the music-based levels. Every world ends with a special stage that is synced to a different song. Running, jumping on an enemy, zipling and everything else in the stage is a different note of the song. Completing it in one go gives an almost euphoric feeling of art, music and games coming together perfectly. My favorite of these stages is actually the first one, Castle Rock, which is set to Ram Jam’s “Black Betty.” Throughout the stage, enemies pop out from the screen and yell (in a cartoony voice) “BAM BA LAM!” in such an adorably awesome way that it deserves to be experienced by anybody remotely interested in rhythm games.

The most incredible thing about Rayman Legends is how robust the package is. It’s simply jam-packed with content, including eighty new stages, forty stages from Rayman Origins (nearly the entire game), daily challenges, daily extreme challenges, weekly challenges, weekly extreme challenges, unique multiplayer, the Kung Foot soccer mode, a creatures gallery, tons of heroes, timed “Invasion” stages and an enormous amount of collectibles. Going into detail about these would likely double the length of the review, so just know that you’ll get your money’s worth even at the lowered $39.99 launch price. It’s the sort of game that one could play on a daily basis for at least a year and always find something new to do.

Talking about Switch version, not a whole lot has changed from what you may have experienced upwards of four years ago. The platformer still includes touch screen support, alongside taking advantage of the gyro sensor. It also features everything the past versions came with, including leaderboard support, couch coop – which is one of the few games that one Joy-Con is properly capable of handing – and the numerous game modes. The one “big” addition is the Kung Foot Tournament, which really isn’t that notable. Kung Foot is essentially Rayman Soccer, but the Tournament adds, well, tournament play as eight players can participate (four per match) in a best-of-five competition. Kung Foot was more of an afterthought when the Rayman Legends was originally released so long ago and this tournament mode doesn’t really change anything. Unfortunately, it would seem load times were affected in the Switch conversion. It takes a little longer than any other version, clocking in at around eight seconds every time you enter or leave a stage. Granted, that isn’t a whole lot of time to wait, but it adds up quickly, especially if you like to replay levels. 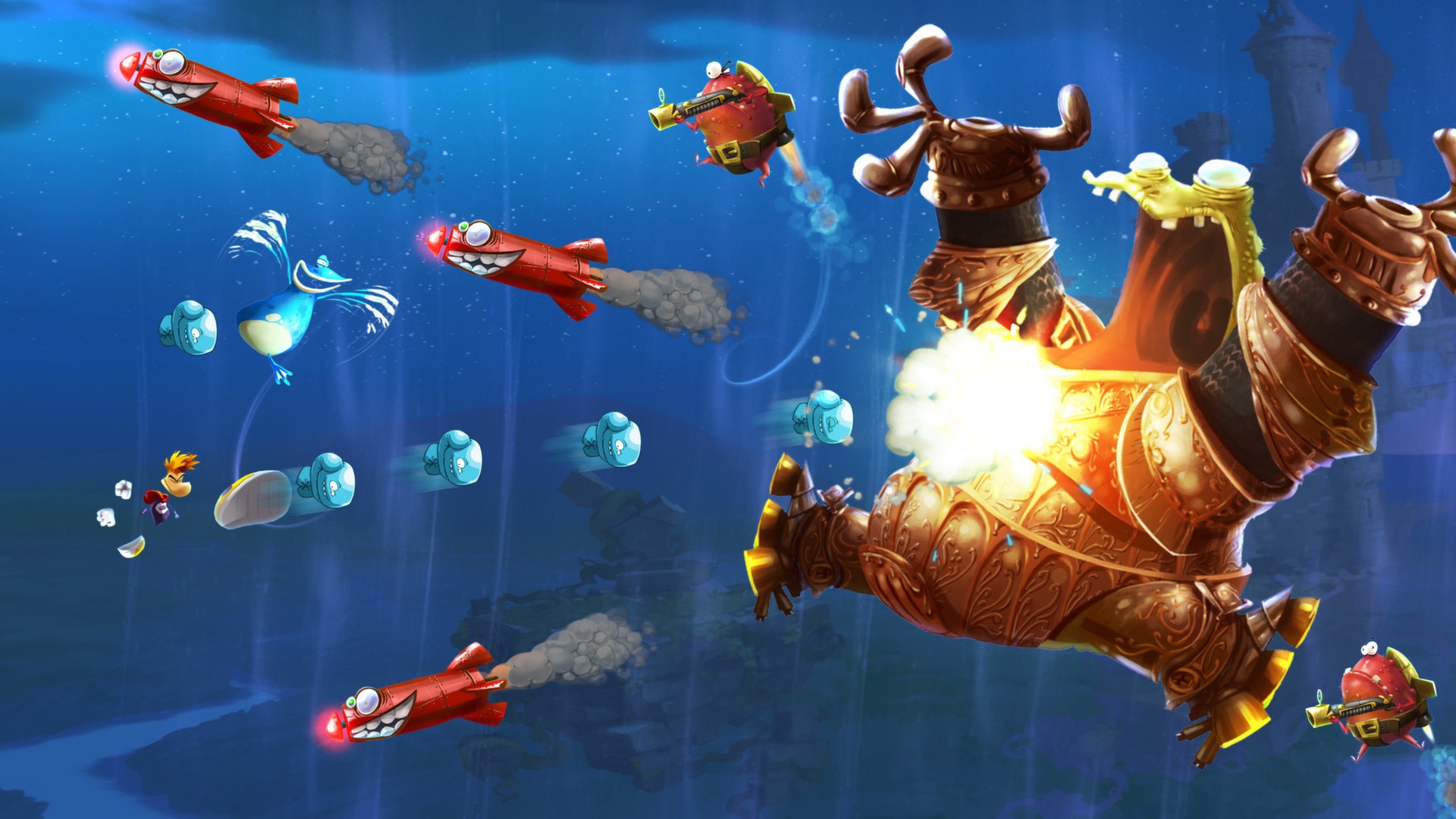 Calling this the “Definitive Edition” may not be the most apt description. It is a fantastic version of the four-year-old platformer, especially considering you can play it on the go, but there’s little here that’s new or enhanced. The touch screen capabilities were pretty much in the game since its arrival on the Wii U and the Kung Foot update is just a tournament mode. In fact, the game’s load times are actually longer on the Switch, even though they’re still not too bad overall. Still, Rayman Legends holds up as a fantastic platformer even after all of these years, creating a memorable and highly-addictive experience that’s hard to match. The art style is one that fans will remember for along time and the musical missions standout as some of the most engaging stages in any Ubisoft game. There’s an incredible amount of content stuffed into this package, and even though it may not be a revolutionary upgrade, the Switch version feels like the perfect platform for Rayman Legends.