Goichi Suda, more commonly known as Suda51, has been creating memorable games with unique characters and situations for over two decades. No More Heroes has been a fan favorite since it first debuted on the Nintendo Wii in 2008 and received a sequel in 2010. Travis Touchdown has not had any new adventures since, but that is coming to an end as Travis Strikes Again: No More Heroes has been announced as an exclusive title for Nintendo Switch slated for release sometime in 2018. Hardcore Gamer was fortunate enough to discuss this upcoming title with writer and director Suda51.

[Hardcore Gamer] You first mentioned wanting to add a third title to No More Heros back in 2011. We know you’ve been very busy since then with different other projects, what made now the appropriate time to make this a reality and were there any obstacles that got in the way of making this title?

[Suda51] There weren’t really many obstacles but between 2011 and now we had been very busy working on other console games. A few years ago we were working on Shadows of the Damned and a few other games, and also my role has changed from being a director to being more of an overall overseer over development and trying out other things and putting together new games. The most important thing was waiting for the right time and that felt like now.

The previous games were involved with Travis and UAA, very violent games with strong themes of revenge and very interesting other assassin characters he had to fight, plus they had stories that seemed simple initially but as the game progressed more and more layers of complexity were revealed. Can you give us an overview of the story and some characters and events that could be happening in Travis Strikes Again: No More Heroes?

If you watch the trailer you’ll see Travis is very much into gaming in his little trailer house filled with video games. This new character shows up, Bad Man, and starts fighting with Travis as he has come to get revenge for certain things and in the trailer we see him playing a video game and while they are fighting they end up getting sucked into this game console called the Death Drive Mark 2 that is sort of phantom game console that was announced but never was released. This game console has six games and each game has their own in game world and Travis and Bad Man get sucked into these games and unlike the previous titles where Travis is fighting individual assassins Travis is fighting his way through the different in game worlds so that is one of the major differences between this title and the previous titles.

Travis has always been a typical gamer character, he likes his pro wrestling and his video games, basically modeled after someone who would play his games except he actually gets to become an assassin and have a beam katana, so in a nutshell it sounds like some misguided fantasies I had as a kid where I get sucked into a video game where I could actually live it and fight through the enemies myself.

Travis is definitely a gamer and into all that kind of stuff. In this title Travis is into AAA games but he also is into indie games and this title showcases that interest of his, if you watch the trailer you can see he’s playing through Hotline Miami so he definitely has a strong interest in indie games. 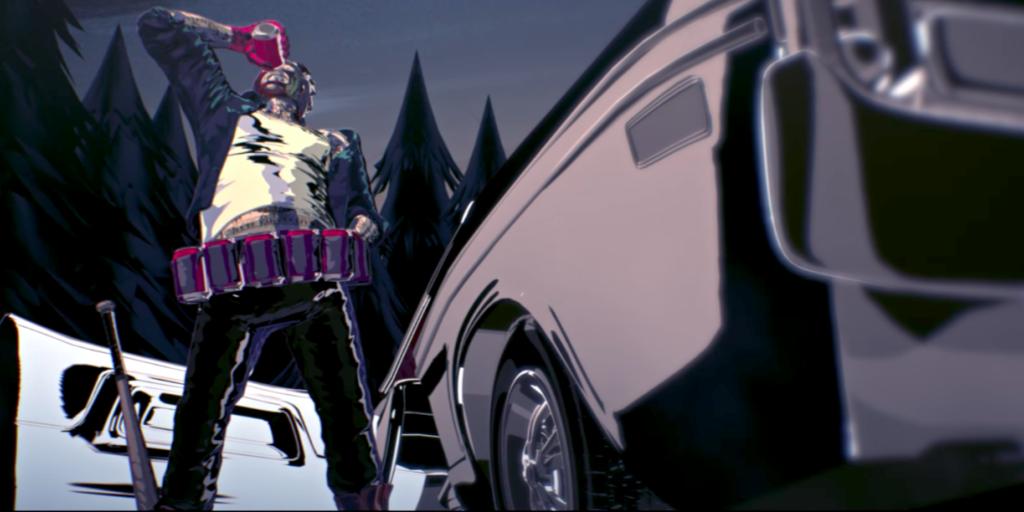 He’s playing this title and has a particular interest in indie games. Will there be Easter eggs or other references to indie games that exist in real life or games you have previously worked on?

Right now we’re in the process of figuring out how exactly we are going to be able to do that. Right now the one thing that has been decided that we can talk about is a T-shirt collaboration, where in game we will see Travis wearing shirts based on actual indie games such as Hotline Miami. We’ve been talking to different indie game creators about what games we can use. The only concrete thing right now is the T-shirts Travis wears but we are definitely trying to find other things we can do with indie games to incorporate them.

No More Heroes has always been an exclusive Wii title primarily due to the unique motion controls, even when they did port it over the PlayStation 3 they incorporated the PlayStation Move. Since this is a Switch exclusive can we get into the specifics about how the controls will work?

One thing that was decided pretty much from the start of development was to make it so the game can be played completely with one Joy-Con. There’s a few reasons for that but one reason is to keep the play mechanics simple but another reason is the hope that Travis could be put into Super Smash Bros. sometime in the future. There is nothing concrete on that yet but it is something we’re hoping for in the future.

It would be interesting to see Travis in Smash Bros. His persona is so different than most Nintendo characters but play mechanic wise he is a no brainer.

Definitely, if anyone from Nintendo reads this Travis Touchdown would be a great addition to Smash Bros.

Travis is waiting for his invitation from Smash Bros.

It would be a dream come true for a hardcore gamer like Travis to be included in Smash Bros. and go toe to toe with Mario and Link. 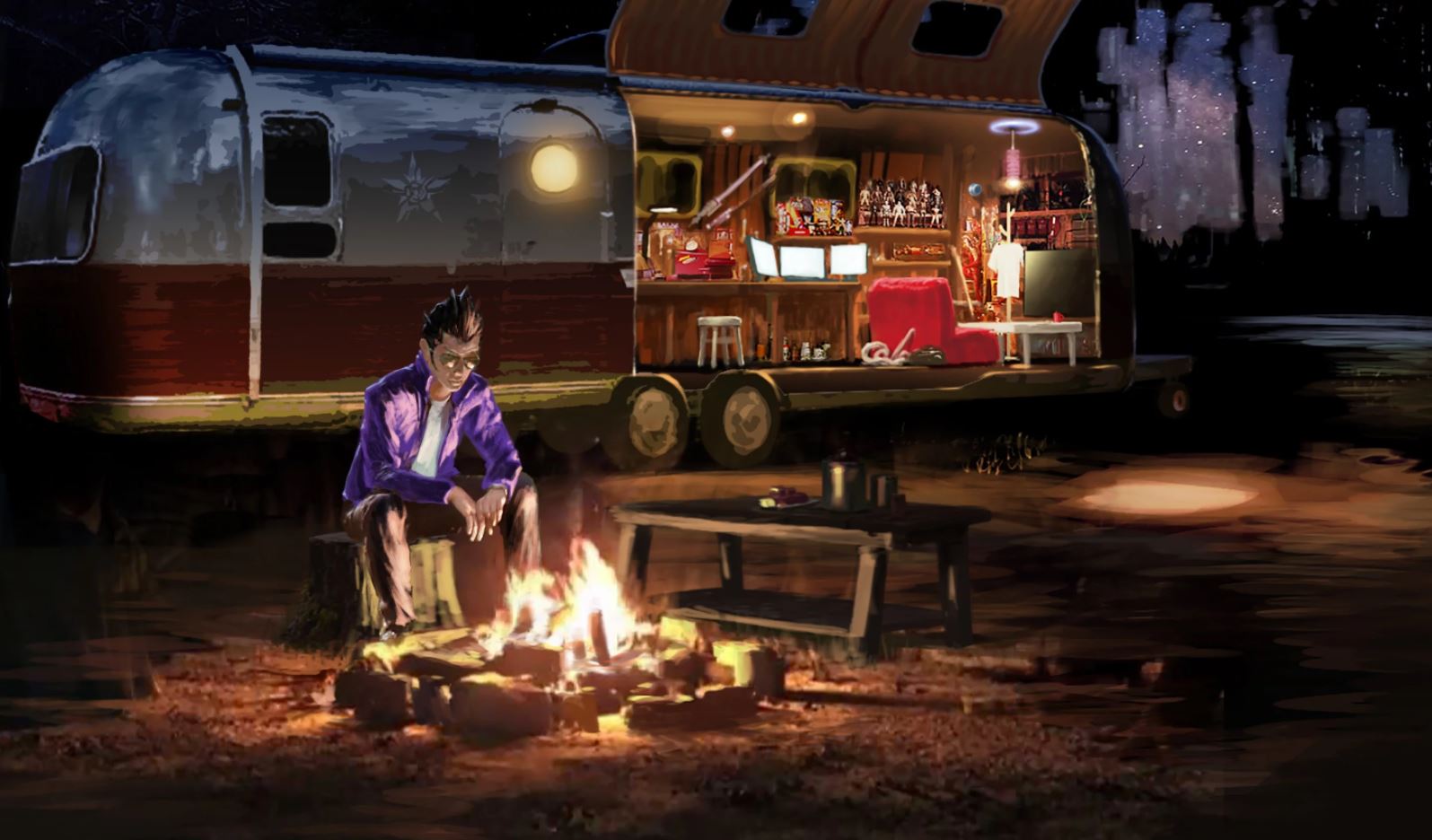 We have some concept art sitting out on the table that looks pretty interesting. We have this mean looking dude with a mask and baseball bat wearing a bandoleer filled with beer cans, which I am going to call the candoleer. Can I assume this is Bad Man?

Yes (laughs at candoleer). You can call it that, I think people will figure out what it means.

This thing kind of looks like a demonic artifact, with a skull head with red glowing eyes holding a staff that looks like its made out of power outlets. It looks cool but I have no idea what to make of it?

That’s the Death Drive Mark 2, the phantom console Travis plays. The games, instead of being cartridges are balls that go into the top thing here that loads up the games.

There’s a few different glove designs here, one of them looks like evil, modern high tech version of the NES Power Glove with the cross pad and buttons and this one looks like some high tech glove.

This is called the death glove, which Travis equips when he goes into the game world. One of them is what he physically puts on when he plays the Death Drive Mark 2 and the other one is what he actually sees in the game world. So basically it’s like a Power Glove.

So essentially its a VR controller that we hold and the hand form of it we see inside a VR game.

Right. This statement is purposefully vague but when Travis goes into the game he might be able to use this glove for some force like powers. It might be used for something like that. 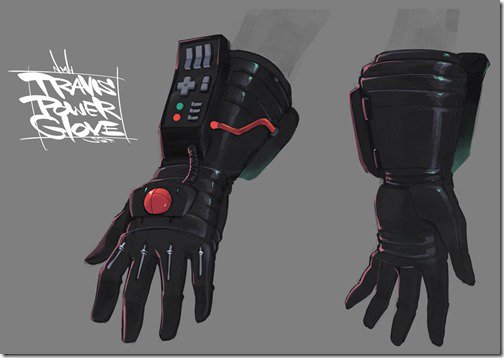 This woman in a black dress with some high end gaming headphones with a medical bag and white coat with heavy black eyeliner, who is she and what is her relationship to Travis?

This is a character named Dr. Juvenile and she is a game creator that designed the Death Drive Mark 2 as well as designing the different games Travis will be playing. She designed all the games and all the hardware.

And this must be Travis’s humble abode. Let’s see what he’s got going on in here, this looks like the most otaku trailer I’ve ever seen. He’s got three monitors set up, a good figurine collection, a ton of game stuff set up. Looks like the ultimate gaming trailer.

Maybe, maybe. There may be some characters popping up in the game, you probably know what that means.

Too early to confirm or deny in other words? 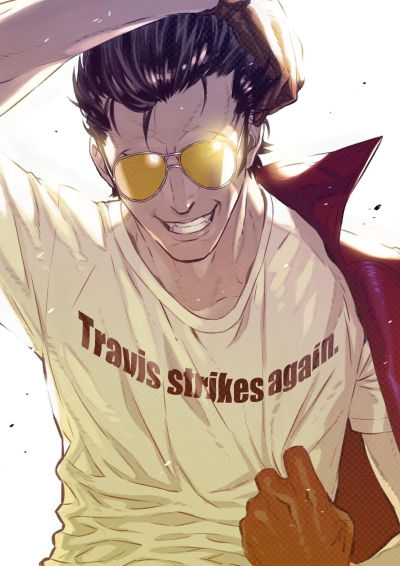 No More Heroes in particular generated a lot of interest in its soundtracks, but games you work in general tend to have soundtracks play a significant role with the licensed music from Lollipop Chainsaw and the soundtrack that was assembled for Let It Die, can you tell us any details of what you have going on for Travis Strikes Again?

There is a specific reason the game is not numbered is because we don’t want people to think of it as a direct sequel to No More Heroes one and two. It is in the same hero in the same world and circumstances but we want people to view as starting a new adventure with this character and not just a continuation. We do want No More Heroes fans to play and enjoy Travis Strikes Again, but we also don’t want to limit our audience to only the current fans, we want this game to be accessible to younger players and attract people who aren’t familiar with No More Heroes