A week into Destiny 2 and so far, so good, but like any online game Destiny 2 will have to maintain footing if it wants to succeed. Luckily it seems to be doing a lot of what Destiny 1 got wrong, right. Dedicated fans, fans that dropped off and newcomers all seem to have made their way over to Destiny 2. The Destiny universe hasn’t felt this alive since The Taken King. Guardians run to and from Public Events with fervor, the Farm and Tower are both full of Guardians decrypting engrams or just goofing around. Destiny feels good right now, like a true MMO community.  Focusing tightly on the community aspect has left something by the wayside unfortunately and no amount of Northbot (the Destiny community’s reference to Nolan Norths voice work for the Ghost) can fix it.

Your Guardian could talk in the first Destiny. Such a small feature meant volumes and to take away every Guardian’s voice is a misstep on Bungie’s part in giving a Guardian the autonomy they need to function as a proper vessel for play. A Guardian is all the player has to feel connected to the Destiny world, even if some would use all three-character slots to get more bang for their buck, guaranteed they have a favorite. It will be the one with the most hours played, the most care put into what armor and weapons are being used, even sporting the best shaders. 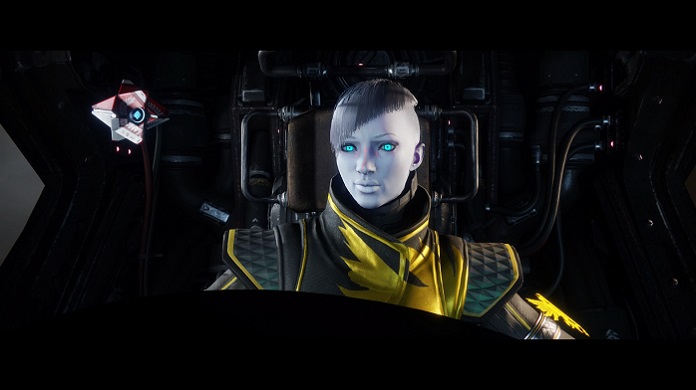 I’m just going to ignore you.

While the vast majority of Destiny is running around blasting aliens with metal and space-magic, there is always the small portion that are strictly story. What happens then when the player avatar’s voice is suddenly nonexistent? That feeling of disconnect. I felt it my entire playthrough of Destiny 2 and the scenes featuring moments where it would have been appropriate for my Guardian to talk were either dominated by Northbot or my Guardian looking hilarious waving her arms around. What was amusing at first become frustrating because it felt like Bungie had taken away that exact autonomy players crave from their gaming avatars.

It would’ve been amazing for Bungie to include more voice work for Guardians. They could have even taken it a step further into the MMO realm adding different voice options. While it would, of course, added cost on their part, they probably could have spent the extra buck, because…Activision. Whether it was a risk they didn’t want to take on the success of Destiny 2, cutting corners in case the game didn’t meet the numbers or even simple design choice to be done with Guardians talking, it was a blow to Guardians everywhere. 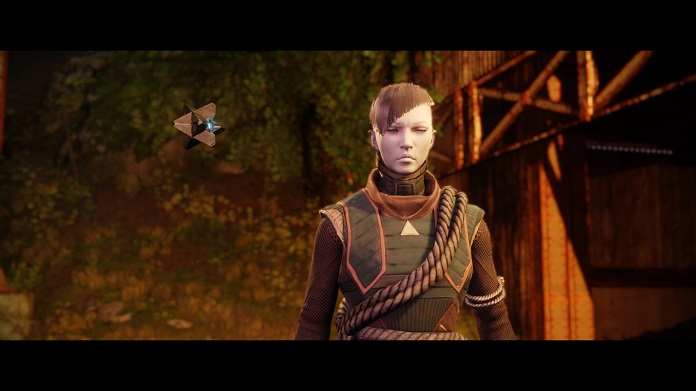 The other solution for Bungie if they wanted Guardians to not speak was to simply apply the multiple voice actor work to the ghost, the companion of every Guardian. Seeing that the Ghost is the Guardian’s companion, more diversity in the players sidekick could have expressed at least some player establishment. Instead no matter who’s playing, it’s the same exasperated Northbot talking feverishly into Guardians ears. It becomes tediously straining. I’ve never craved the return of Dinklebot (Peter Dinklage’s Ghost) this hard since its exit.

Northbot has a way of being in awe at everything the player is doing or seeing, conveying a vision of how spectacular it all is. It feels like a parent showering their child with ludicrous amounts of praise for no reason. “Who’s so good at playing the game? You are Guardian, yes you are!” It’s not needed, the social aspect of Destiny is enough to handle that on its own. It’s like going to a youth league soccer game and theirs that one parent with the bell, just wailing away. It takes focus away from the players on the field while making it hard to create one’s personal story. A singular voice telling me how great I’m doing is easily achieved by peers playing with me. They’ll also probably have a something better to say. 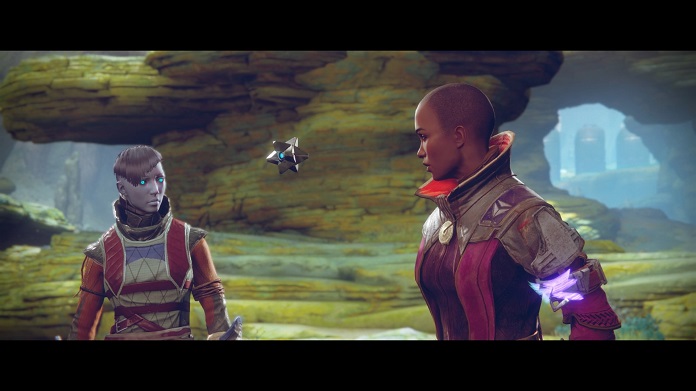 Hey… Ghost, Ikora and I are trying to have a conversation here.

While it doesn’t seem to be the biggest issue in the Destiny community, it’s enough of one that this isn’t a new problem. Fans have been upset that Guardians don’t speak since when a Guardians voice was first taken away during later expansions off Destiny 1.

It’s a rather sad state of affairs in 2017 when a AAA game has a mute protagonist. This is also Bungie we’re talking about; they created the infamous Halo series and even Master Chief spoke sometimes. Having no voice at all makes it difficult to feel any sort of motivation for character. Bungie could fix their ways though and add new voice work in future updates; they did rework the entirety of Destiny 1’s ghost lines completely obliterating Dinklebot. For now, though, North’s chipper attitude just can’t match the dreary tones of Dinklebot’s “I’ve been floating around way too long for this crap” attitude and it won’t make up for being an epic space hero who comes off as nothing but bland. Here’s to finding your voice, Guardian.