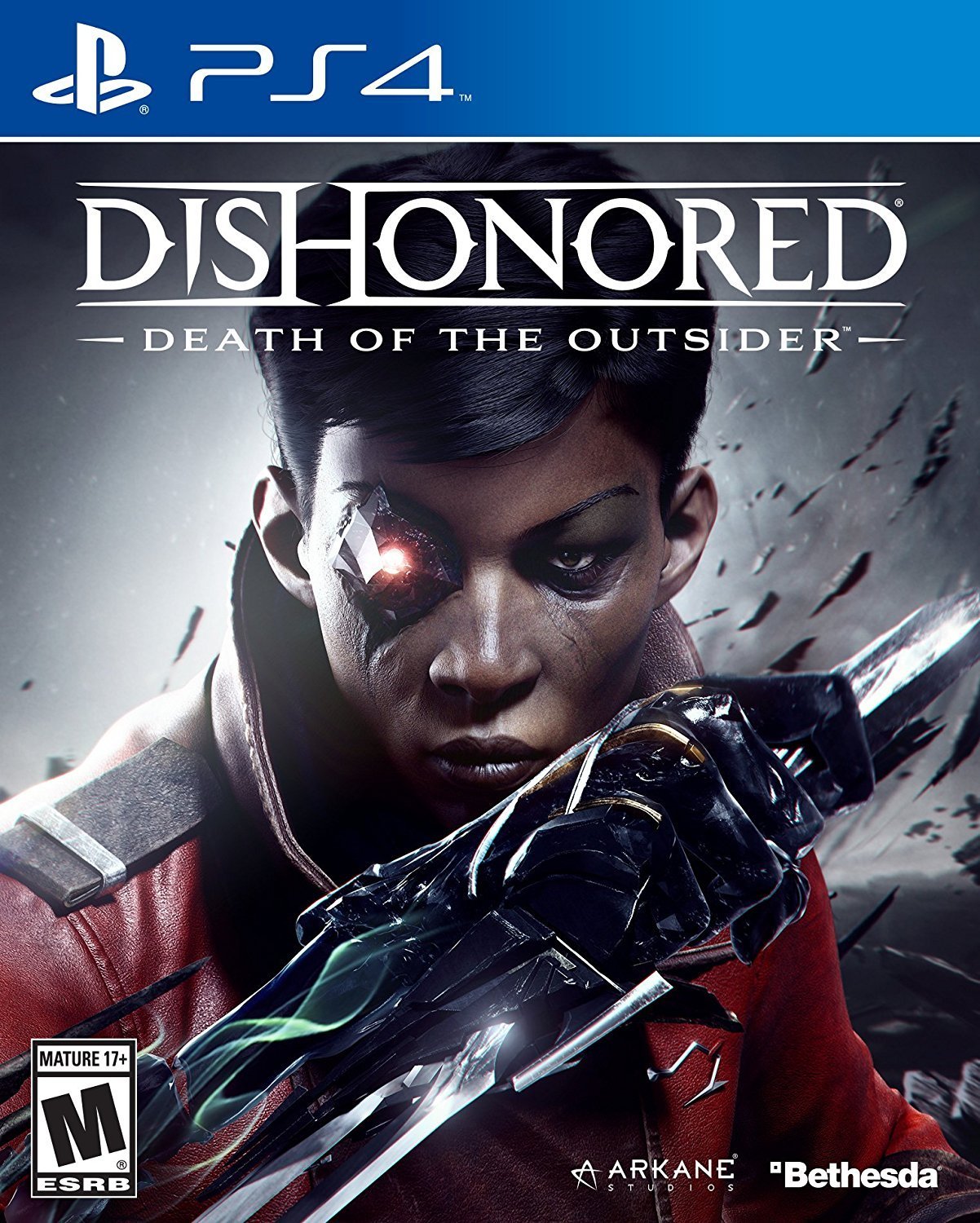 Dishonored: Death of the Outsider

The unknown, a void within nothing, something so far removed from one’s own reality that it becomes impossible to ever grasp. And yet, there are those that will still try, and it’s usually those with the most to lose, at least for those in the city of Karnaca. Dishonored: Death of the Outsider is a fitting resolution to a story any Dishonored fan is familiar with and still pushes the concepts of what the game can be. Death of the Outsider follows the rules but expounds upon them in a way for gameplay that blossoms before the eyes and beauty is in the eye of the beholder. For Billie Lurk that eye is ever present and sees something beautiful in her, through her carving out a superb piece of DLC.

Dishonored: Death of the Outsider is a continuation of a familiar story following a few months after the events of Dishonored 2, hitting the marks for what makes the Dishonored series excellent, being the narrative hooks that exist everywhere within the Dishonored universe. If there is one thing going for the Dishonored series, it’s knocking it out of the park for creating a believable world that seems just as real as our own. A reality just out of view that could have easily been the one lived in, because why shouldn’t magic exist? The ethos of myth, folklore and tales of outsiders already lives firmly in our own reality and Arkane Studios’ ability to continually breath more life into something they created shows the markings of a great game and studio.

Billie Lurk first made her appearance in The Knife of Dunwall — DLC content for the original Dishonored in which the player took on the role of Daud, the one responsible for the events of Dishonored. How appropriate to flip the script and showcase Billie’s time to shine. Death of the Outsider makes sure to wrap up anything and everything the player might know about Dishonored, not missing a beat. Whether familiar enough with Karnaca to recognize some of the locals or perusing the litany of reading material, Death of the Outsider is pure fan service DLC that pushes thresholds for what the Dishonored series can be without the Outsider. Does the Void ever really leave those that seek it out or does it linger forever behind the veil? What is the thing being chased and why does it mean so much to the foundation of what makes up an avid following throughout the Isles? These are the questions Death of the Outsider ask of Billie Lurk. 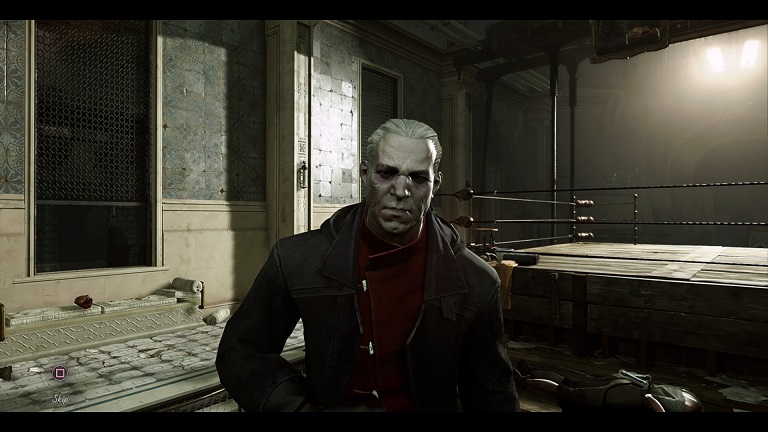 Billie is a character of deception, someone with many faces who even then has her core. Billie grew up on the streets, the child of an alcoholic mother while she was left to fend for herself in the cold gutters of the city. That is until a man named Daud came along. Through Daud, Billie becomes something more, a Robin Hood figure that isn’t afraid to slit a few throats, because sometimes it’s just easier to pull the weed out at the root. It’s also this personality trait that makes the character so freeing and Death of the Outsider wants the player to take this to heart.

The biggest thing that helps push this narrative is Death of the Outsider throws the morality system out the window. Death of the Outsider has a freedom that no other game in the series has. Doing away with the morality system allows the players to partake in their most sadistic pleasures (in the name of good of course, or not.) Either way, it’s almost reminiscent of Fable even though that game did have quite the visual cue for morality. It’s not about morality, much as it’s about being off the leash. Where in previous Dishonoreds it became a game for players on how things would play out, especially those going for a pacifist ending, Death of the Outsider has thrown morality out the window. Dishonored 2 did remedy this by including more ways to silently take down enemies without killing them, but it still meant being careful at every turn and inevitably scum-saving. 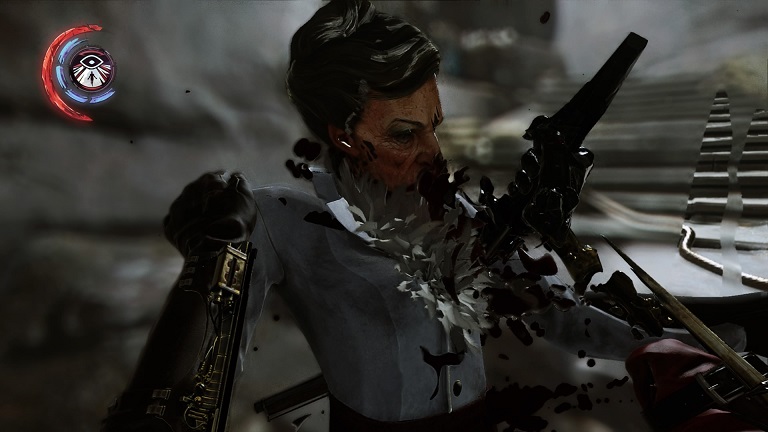 By embracing the urge players want to partake in the most with the narrative elements of the characters and world created, Death of the Outsider can shine for what makes the series fantastic: the ability to craft multiple narratives in an already rich environment. Nothing needs to be explained because it’s all been laid out already and the sense of time that has passed feels believable. It shows in the city itself, newspaper clippings and the people that occupy it. A video game world becomes believable when it feels like it is continuing along without the player even when the game is off. Just because it’s not in front of the player doesn’t mean things aren’t happening. It’s the marking of many great games; table top games have been following this rule since DM’s first started rolling dice. Make sure the world is moving and Death of the Outsider nails this. Stagnation only exists in the sewers of a city rotting from the inside out, not because Death of the Outsider fails to deliver a believable backdrop.

What’s even more amazing is the limited power Billie is granted by the Outsider. Coming off Dishonored 2 and cranking back power doesn’t seem logical at first, but proves to again fit the perfect mold already carved out for Billie. Billie isn’t an Empress or an Empresses royal bodyguard, she’s a woman living her best life coming out of a confused sometimes sinister underworld. Billie Lurk’s story is that of redemption, forgiving those that may have wronged us or putting feelings of grief aside, moving past. 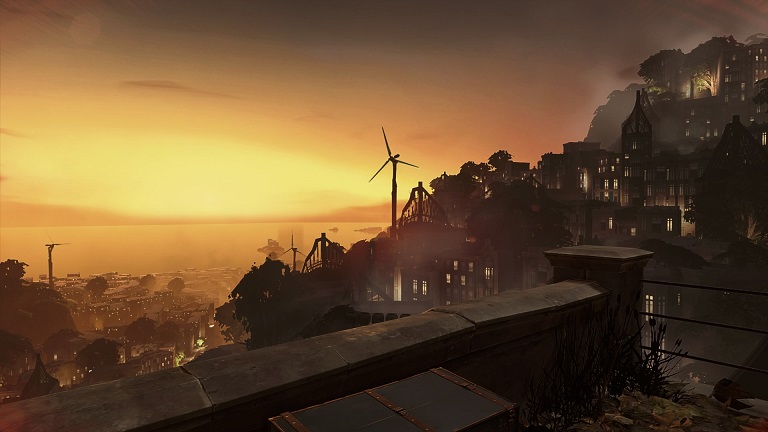 When Death of the Outsider starts, Billie has the lone ability called Rat Whispers, taking place of the heart players are familiar with that spouts exposition on the world around them. Billie does carry a heart around with her (I won’t say whose) and while more for story context, it fits narratively that the heart isn’t occupied but still used. The rats don’t tell the player whether a guard is going home to feed their children or if they’ve just gotten down beating a civilian in the street. The rats are Billie’s eyes and ears for Karnaca, revealing bits of information on the environment leading to clues about how to approach each level. It’s a clever way to fit Billie as a character, but doesn’t work as well as the hearts did when it comes to help. It’s sometimes hard to understand the rats’ due to the intonation, so turning on subtitles wouldn’t be ill-advised. The rats do give subtle enough clues but even then, those can leave one scratching their head.

Billie does of course get a visit from the Outsider. He’s a freaking all-knowing god after all who knew this whole attempt on his life was coming. Death of the Outsider once again pulls a trick just enough to twist things in the best way possible. Instead of giving something, the Outsider takes, and this leads to Billie being bound in a different way, adding fuel to the fire for reason to kill this clown. There’s no skill tree in Death of the Outsider; Billie works with what she’s got, and with the supernatural abilities gained from this bond to the void, becomes an unmovable rock that is pummeling anything that gets in its way. Billie is granted three static abilities and together they make up the most fun that might ever be had in the Dishonored series.

Billie’s mobility power comes in the form of Displace, the ability to put a marker down and transfer to said spot, which is just as maneuverable as Far Rich or Blink from the previous Dishonoreds. Combined with maybe one of the best abilities of any Dishonored, Foresight has Billie exit her body in the form of a spirit that stops time, allowing the player to survey the environment while marking targets the mark does not go away after exiting this form. The best part, though, is the bonus of being able to place a Displace marker while using Foresight, meaning after exiting this form the player will have a spot picked out to move to. This creates for some wonderful planning when taking down enemies or luring them into traps. It also helps getting to hard to reach places or moving through certain barriers, such as fences. The last two abilities are equally as fun, but more for show than anything, although one does prove quite useful in the beginning and the other towards the end. Almost representing a scale of sorts for the balance Death of the Outsider seems to have achieved. 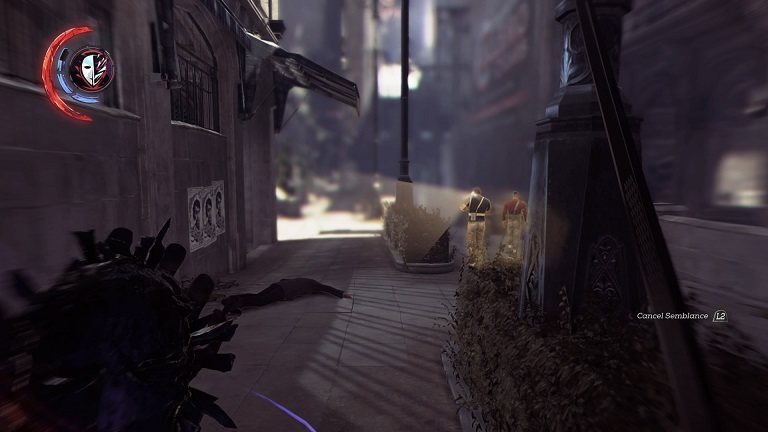 Imagine the scene: Billie needs to get into a bank but she can’t go in looking like herself, she’s a wanted criminal. What’s she to do? Well, she could always steal anyone’s face with the ability Semblance. Dishonored has a way of giving the player spectacular powers but making them sadistically twisted. Semblance is that power. It’s rather useful the whole way through and becomes fun to play with in the late game, being quite handy in other situations. What makes it horrifying black-magic is that the person who is having their face stolen, ends up passed out, waking later only to have a face torn away, only a black husk remaining where their face once was. When I discovered this, it gave me chills and I vowed only to use the power on those whom truly deserved it. The last power is given about two-thirds the way through the game and isn’t so much a power as an aspect of a certain weapon. Giving nothing away narratively, Billie’s sword eventually has a charge ability which can pull Billie towards enemies or knock them into the air. It’s a bit silly but also useful, what does end up happening is the charge is so powerful it will send enemies flying over Billie’s head meaning losing track of where they land. It’s not overly frustrating, but sometimes an enemy will come back to bite. All of this ability play is fed continuously by one thing, and without a proper environment to play in, Death of the Outsider wouldn’t be as much fun.

The Dishonored series has some of the most impressive level design for any digital space. Not only are the fun to play around in but the since of scale and ingenuity seems believable. Death of the Outsider continues this trend, placing the player in a city already familiar and even visiting some locals from Dishonored 2. Even if a few of the missions have Billie going through the same spaces, it never feels confining. This is in part to the rich level design that makes Karnaca feel like a living place. People live out their lives, go to work and head home at the end of a long day. What’s more, the mythos created for Dishonored is bathed in everything. It can be heard in a passing conversation or scene from tattered posters plastered to city walls. Karnaca has a heartbeat. Death of the Outsider also proves that it can introduce new level design that keeps up with an already stellar world. 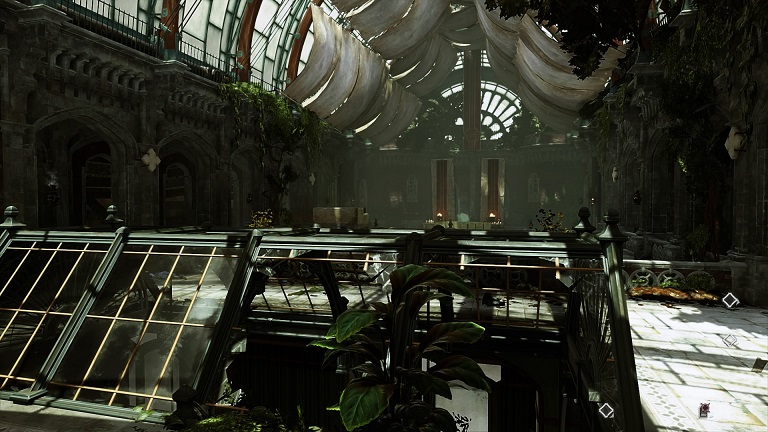 Dishonored: Death of the Outsider is a fitting resolution to a familiar story. Billie Lurk is an excellent character to showcase the underside of a world already known but with plenty of mystery left in it. Combining elements from all previous Dishonored titles while dialing back certain aspects makes for a fresh experience that fans will feel comfortable in. Billie may not have made a deal with the devil, but the devil came to her anyway, and using the tools given, she has something she’s determined to accomplish: killing the Outsider. The thing about gods, though, is that they aren’t always as impressive as they seem and most of the time end up being more human than we realize.