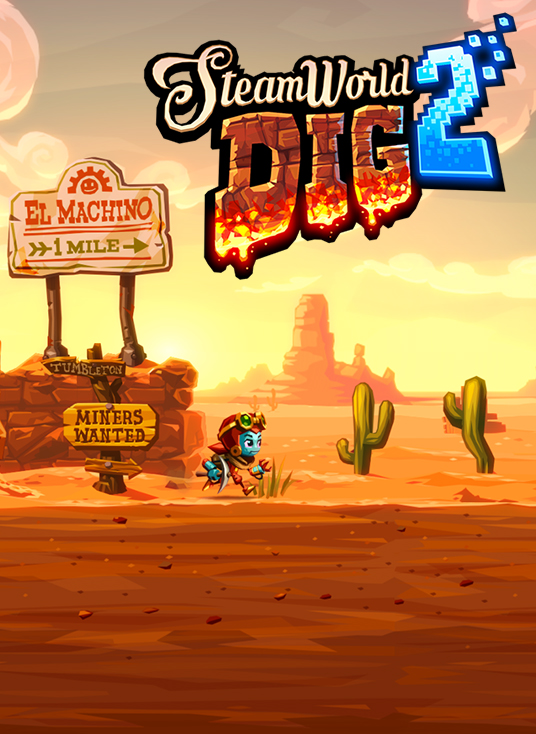 After the events of SteamWorld Dig it wouldn’t have been a bad idea for Rusty to take a vacation.  Kicking back for a while and maybe getting some maintenance work done would have been more than justified, but instead the robot wandered off to a new adventure, disappearing without a trace and leaving a worried town behind.  Dorothy was concerned enough to trail after Rusty and finally got a hint of where he’d gotten to in the town of El Machino.  Something has gone wrong, though, and after saving the SteamWorld once it seems like Rusty may be working towards destroying the planet.  Seeing as in SteamWorld Heist the world had been shattered, it seems possible his plan may work.  Dorothy doesn’t have the advantage of seeing a game set in the future, though, so she can only work towards finding her lost friend while trying to keep the SteamWorld from shaking itself apart.  This, of course, is done by mining.

SteamWorld Dig 2 is exactly what you’d want in a sequel- more of the same but bigger and better.  In the original, Rusty used his mining skills to bring a run-down town back to life, getting the local economy back on its feet and, as a side-effect, saving the world along the way.  With the world and its setting already established, SteamWorld Dig 2 can move the story along a little more quickly, but the basics haven’t changed.  Rusty is deep underground doing who-knows-what, so Dorothy needs to dig her way to him.  Initially armed with the pickaxe she set out with, she can do little more than run, jump, and beat on squares of dirt until they break, but she soon earns a dash that enhances her mobility and jump range, then uses her new skill to defeat a blue flame-spirit who then becomes her mildly psychotic companion.  SteamWorld Dig 2 starts out small and keeps growing with new areas accessed by the skills Dorothy acquires along the way, not quite a Metroidvania but very close.

The core gameplay loop is pretty simple. Head into the mine with your trusty pickaxe and beat up dirt to gain ore. You can only carry so much loot at a time, and as the lantern burns fuel its area of illumination shrinks, so you need to head topside to sell what you’ve got while automatically topping off health and light on a regular basis. The upgrade shop is right beside the ore-purchase-bot, and about the only thing money is good for is strengthening your tools. The pickaxe gets stronger, able to dig through dirt with fewer hits, the lantern lasts longer, your backpack holds more ore, etc. Each tool can be upgraded a set number of times, with the usual rise in price for each new upgrade, and not only does the basic functionality improve but it unlocks new skills that you have to buy with gears.  Hit harder with the pickaxe, get a chance to bounce a projectile off the armor, lengthen the grappling hook, and many more are available to choose from, but you can’t afford them all.  I didn’t end up with quite enough cash to max out all the gear on my run, although it was close.  The choices on what to keep and what to pass on aren’t particularly hard, but they do need to be made. 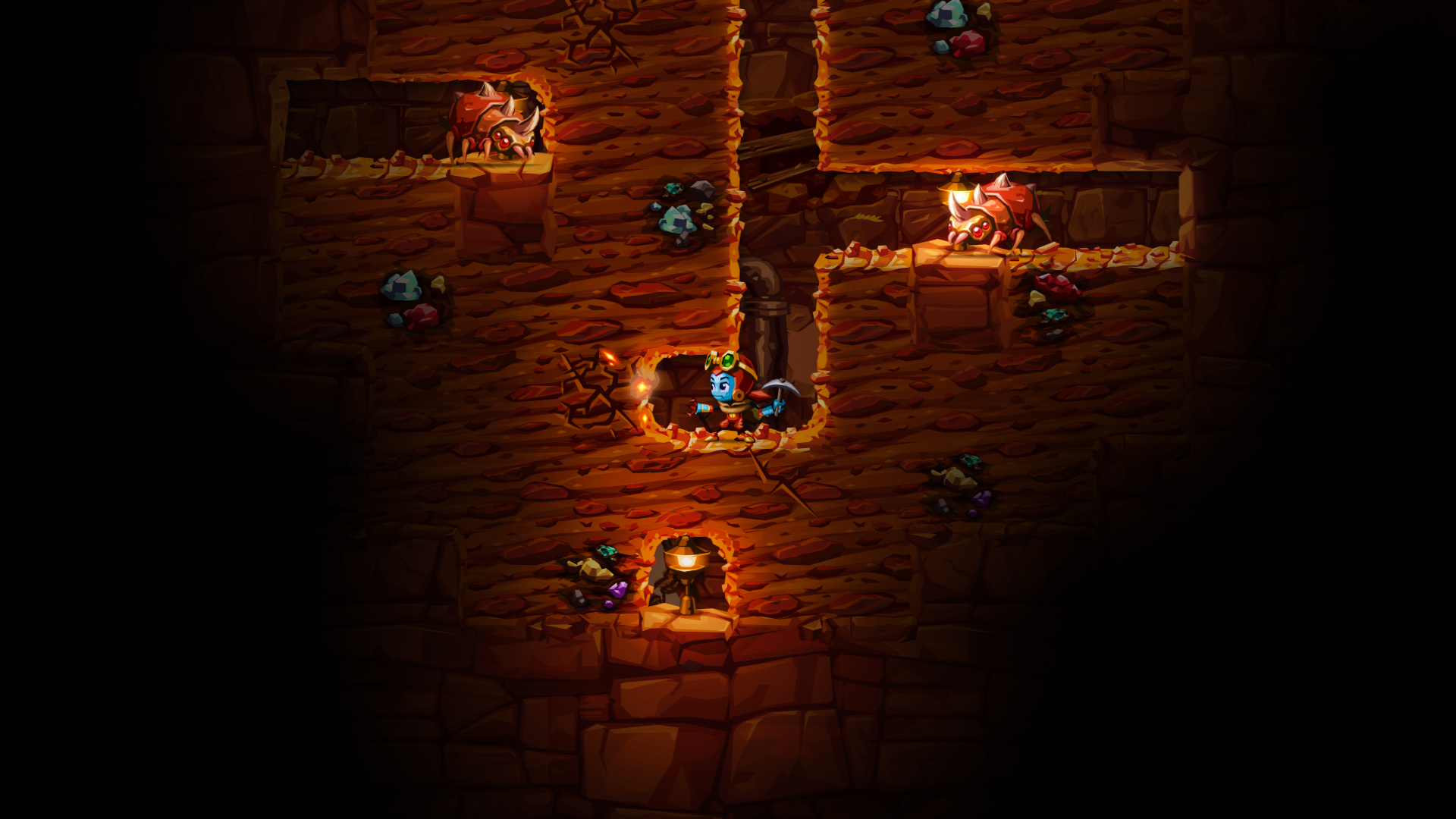 Once you’re happy with the loadout it’s time to head back into the mine so you can get a little closer to the next goal, dig up some ore along the way, head back topside to spend it on better gear, repeat.  The mines are clogged with dirt, rocks, and the occasional passageway, and you’ll need to dig responsibly to avoid leaving ore behind.  While eventually you’ll get the necessary tools to zip around the mine at will, you’ll never be able to swing the pick while jumping, so if there’s a deposit three spots up a sheer wall it’s stuck there until the latter part of the game.  You can stand underneath and dig up, but that leaves you staring helplessly at an ore deposit just out of reach.  Eventually you’ll earn a sticky-grenade gun, but in the early going when you’ve got very little pack space and every chunk of low-grade metal is another step towards decent equipment it’s hard to let a resource pass by.

As you dig down in to the earth, more events and extra areas open up.  The tube system lets you zip straight to checkpoints, once you’ve cleared the rubble from the entryway, making navigation fairly easy.  Hidden areas are nearly everywhere, waiting for an attentive miner to notice a crack in the rock or investigate a suspicious dead end that hides a false wall.  Most secrets contain a cog or a valuable gem, but some have relics you can trade to a collector in town for special abilities that alter the gameplay, such as making enemies tougher but grant more experience.  One of the best distractions, though, are the caves with bonus challenges, which have unique platforming segments to put the mechanics through their paces in a way the more free-form mining sections don’t allow.  These areas are always fun to explore, and generally have a couple of hidden areas to ferret out as well.  If you’ve found everything the cave gets a green checkmark on the mini-map, and when combined with the Secrets percentage for each area it makes going for 100% a reasonable quest.  Except for the super-hidden bonus area, which is made of pure evil. 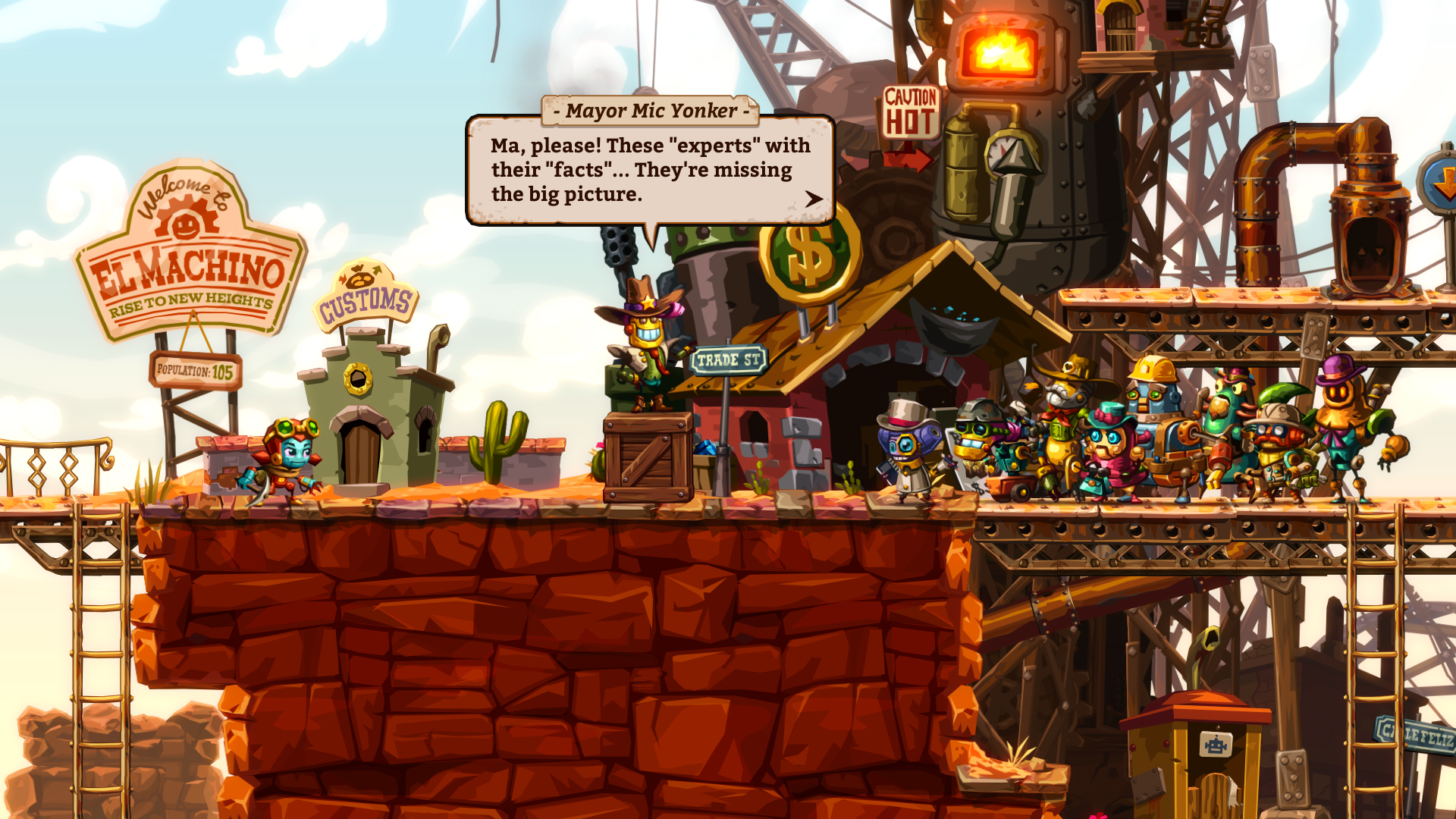 SteamWorld Dig 2 is a huge, expansive and utterly fantastic mining/platformer, with a great variety of challenges and plenty of tools to attack them with.  Dorothy’s progression from a robo-girl with little more than a pickaxe to her name to a multi-talented hero capable of dominating any challenge the SteamWorld throws at her is perfectly paced, with new tools and abilities coming along just as you’ve gotten used to the old ones.  The mines are deep and varied with their scenery and the critters roaming their passages and it puts up a good fight without ever feeling unfair.  That doesn’t mean it can’t get brutal at times, as evidenced by the need to clear a particularly tricky cave perfectly to earn one of the more meaningful relics.  There’s a fun sense of humor in the writing, both for the characters and item descriptions, making it worthwhile to talk to everyone and check out the relic descriptions.  Rusty’s quest back in SteamWorld Dig started out small but never stopped growing, and while he’s mysteriously disappeared, Dorothy’s quest sees the world get bigger and more detailed with a refreshing shot of storytelling continuity.  SteamWorld Dig 2 ends at a satisfying point but with a few blatantly dangling plot threads and it’s a testament just how great the game is that I’d cheerfully dive straight into the sequel to see what happens next.