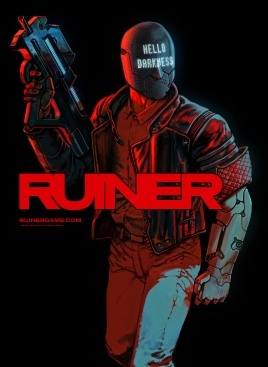 Let’s begin by getting one thing out of the way: Ruiner can be a difficult game. I myself died fifty-seven times during my initial session. That may not sound bad at first, but the reality is that I’m not talking about the game as a whole, I’m talking about dying fifty-seven times during the game’s prologue. Yes, it’s a game with that level of intensity. Maybe there was a particular strategy against the boss of the level that I didn’t see, or maybe I just didn’t have my head in the game, but this isometric cyberpunk action title from Devolver Digital and developers Reikon Games kept kicking my ass all over the place. You may think that means I disliked it, but quite the contrary, there was still enough ultraviolent goodness to keep me coming back for more.

Set in the futuristic metropolis known as Rengkok, Ruiner sees you playing as an unknown helmet-wearing sociopath with a hacker in their brain, attempting to get them to kill the boss of Heaven, the massive corporation that basically controls all of Rengkok (per cyberpunk tradition). Once the plan is botched, another mysterious female hacker contacts you instead, revealing that this is all so you can rescue your kidnapped brother, thus sending you out on a roaring rampage of revenge. This mystery lady promises to help you out along the way, although the way she issues you commands, flashes images of your brother, gets excited over hacking onto heads, and constantly refers to you as a sort of obedient puppy suggests she may not be fully trustworthy.

So we have an ultraviolent action game seemingly in a similar vein to that of one of Devolver’s other legendary titles, Hotline Miami. As you progress stage by stage, you’re armed with nothing but a small amount of weapons to carry – one melee, one firearm – and things move incredibly quickly, where you have to act fast to get the drop on foes. However, the battlegrounds in Ruiner are larger, with a lot of space in between each skirmish to do some slight exploring, and enemies tend to attack in waves with each section. The level design is indeed particularly nice, offering up a lot of cover and unique elements to utilize, but also like Hotline Miami, the challenge level can feel a bit too tricky at times. Even when playing on Easy, prepare for a ton of quick deaths. 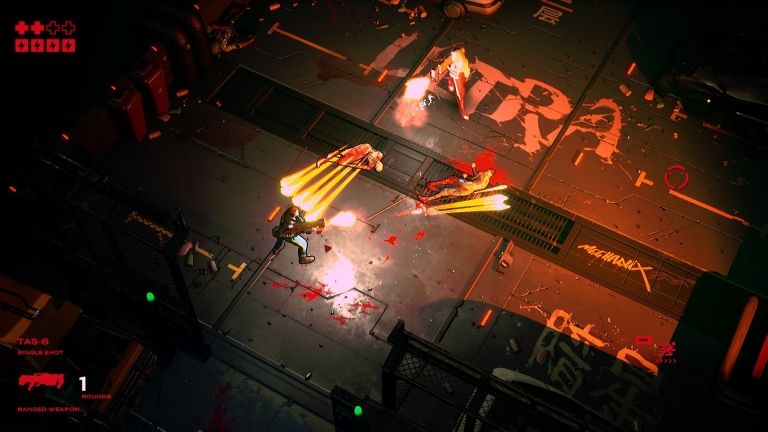 In fact, as I began to make my way through the early parts of the game, things were indeed simple, yet fun, but it all initially felt a bit…off. I started out using a controller, but some parts of the default button layout felt like odd choices for a game that’s particularly fast-paced, such as using the left bumper for dashing and the right bumper for melee attacks. Then there was the fact that despite having a lot of guns to pick up along the way, they didn’t seem be of much help. They ran out of ammo extremely quickly, and enemies seemed to take a lot of bullets at times before they went down, in contrast through how some of the mooks could rip through your health easily, especially when attacking you from both sides. Then there was the first boss, leading to the majority of those aforementioned fifty-seven deaths.

The problem, however, seemed to be that I was trying to play things more like a twin-stick shooter, and that I’d have to mix things up when it comes to attacks. Your melee weapon isn’t just a standard default tool, it can actually deal heavy damage, and dashing right up to enemies and wailing on them with the starting metal pipe before they could get a chance to react works quite well at times. Heck, that’s what took down the first boss, though it did lead me to oddly question why emphasis would be placed on a variety of futuristic firearms when a hunk of metal ended up being more effective. 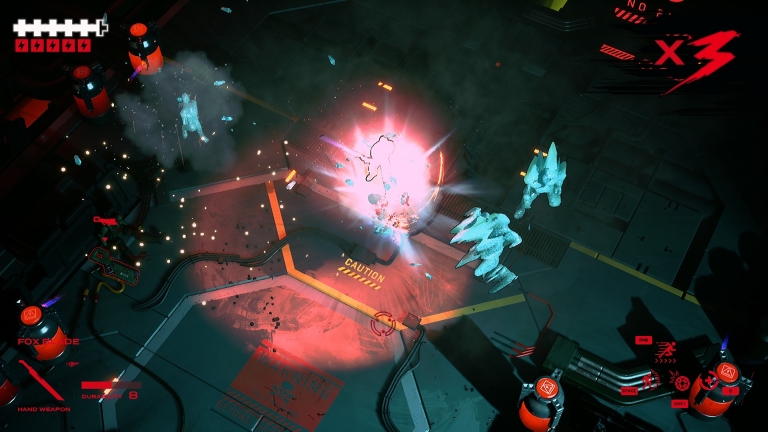 Once the more exotic firearms get unlocked and you’re able to toughen up weapons with certain abilities, things get immensely more fun. You get to work with likes of ice swords the freeze enemies and them shatter them, massive flamethrowers, full-on laser rifles, and more, which definitely deliver a much more satisfying impact and even make for some cool, bloody animations. Weapons are either dropped by enemies, found around the area, discovered by hacking lockers, or – quite uniquely – using grinders after each stage/massive brawl. Once a grinder lands, you can have it recycle all of the unused weaponry in the area into Karma (AKA experience points), as well as have it spit out a new, more powerful weapon. So it provides a bit of an incentive to mix things up and not just run around, grabbing every gun that appears.

The Karma you earn in Ruiner unlocks new skills as you level up, allowing you to gain access to the likes of shields, grenades, mind control to have enemies attack each other, the ability to convert energy into health or vice versa, and more. There’s definitely a huge spread to work with, and they become available to you at a nice, quick rate. The trick, of course, is trying to come up with a mix of abilities and preferred weapons that suits your play style. Said weapons will be required to take down a hefty mix of enemies as well, with a nice variety in both design and attack patterns, ranging from suicide bombers to more dash-loving Triad members and dampeners that can just suck away health and energy, to name a few. 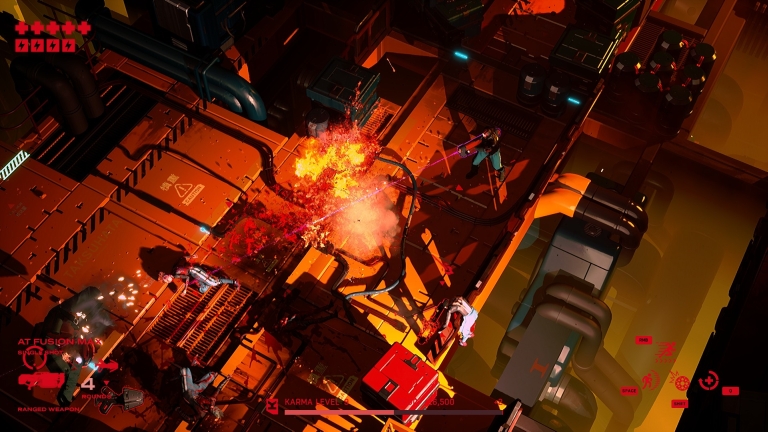 All of this leads up to the boss battles at end of each level, where you fave off against a colorful cast of worthy foes, each with their own unique strategies that provide a challenge and help complement their personalities. Personality is one of Ruiner’s strongest traits, as its dark visuals and detailed worlds add a lot to helping craft the world of Rengkok, along with the thumping and atmospheric electronic soundtrack. Some of the best parts occur in between the shootouts when you’re just exploring the streets, picking up sidequests (albeit some that are just parts of the regular plot anyway), talking to the locals, getting your fortune told via I Ching, or searching for cats to hack into. It makes sense in-game (sort of). It really does make the city come alive, and paints a harsh yet dazzling picture of an intriguing cyberpunk world.

Once you get bast the initial difficulty barrier and get the hang of things, Ruiner delivers some classic action with a nice mix of old-school and modern twists. If there is one other flaw, though, it does feel like it tries a bit too hard at times in giving players options when it comes to choosing how to play. The end results are techniques such as the multi-dash that come across as unnecessary (you’re supposed to use it to ram a shield into multiple enemies, but things get too chaotic to try and pull it off), or elements like the combo counter that rewards quick, multiple kills, which also feels like it doesn’t contribute much to the overall experience. Still, making a game that allows for several different approaches can’t be that bad of a thing, especially when it basically succeeds. 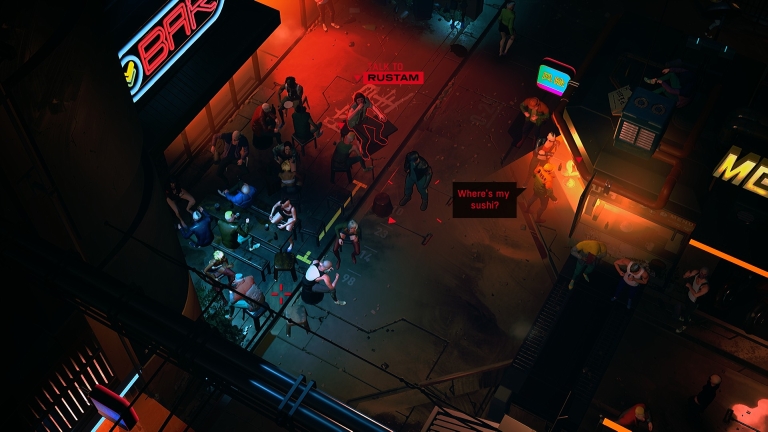 Despite a bit of a hurdle when it comes to difficulty at the beginning, Ruiner is quite the addictive action game, one with a lot of variety in its combat that packs a lot of experimentation into a small package. The visuals are amazing when it comes to depicting the grittiness of Rengkok, the characters and enemies are well-designed, and the speedy gameplay works exquisitely, perfectly capturing the feel of a futuristic action film. The more you get involved, the more you discover just how much of a blast it is, so give it a shot. Seriously, the ice sword alone is worth it. I love you, fox blade.