Checking the Score: Hunt: Showdown Uses its OST as Cues for Gameplay

Among the select few individuals present on stage during Microsoft’s E3 conference this year, many would have taken specific notice to composer Gareth Coker’s perhaps surprising entrance amid the flair and extravagance that is so often a staple of Xbox presentations. For two reasons: one, Coker wasn’t there to spew lofty nonsense or filler; his speechless presence was instead that of presiding over a grand piano and playing the lead melody that accompanied the announcement of Ori & The Will of the Wisps. And two, in doing so, reflected just how well the UK-born composer of both film and video games could pull at one’s heart-strings with such simple yet elegant balancing of chord progression and motifs.

Anyone who’s played the acclaimed Metroidvania, developed by Moon Studios, will have caught wind of such weightful resonance that was such a critical and positive aspect of the 2015 title. What Coker demonstrated with Ori was the ability to home in on sounds that taint both the head and the heart — arrangements that, like mathematics, have a sort of existential wonder. One that, when all the pieces fall into place (and the greater whole is indeed much more than the sum its comprised of), feel like some grander revelation than what is necessarily present. In the context of the game, Coker’s sound is one of lofty, emotional impact where the simple presence of a piano or even a string instrument (perhaps in unison) becomes something much more. A figment of a melody transforming into a far more personal and meaningful translation of the game’s rollercoaster tale of love, loss and the consequence of such. 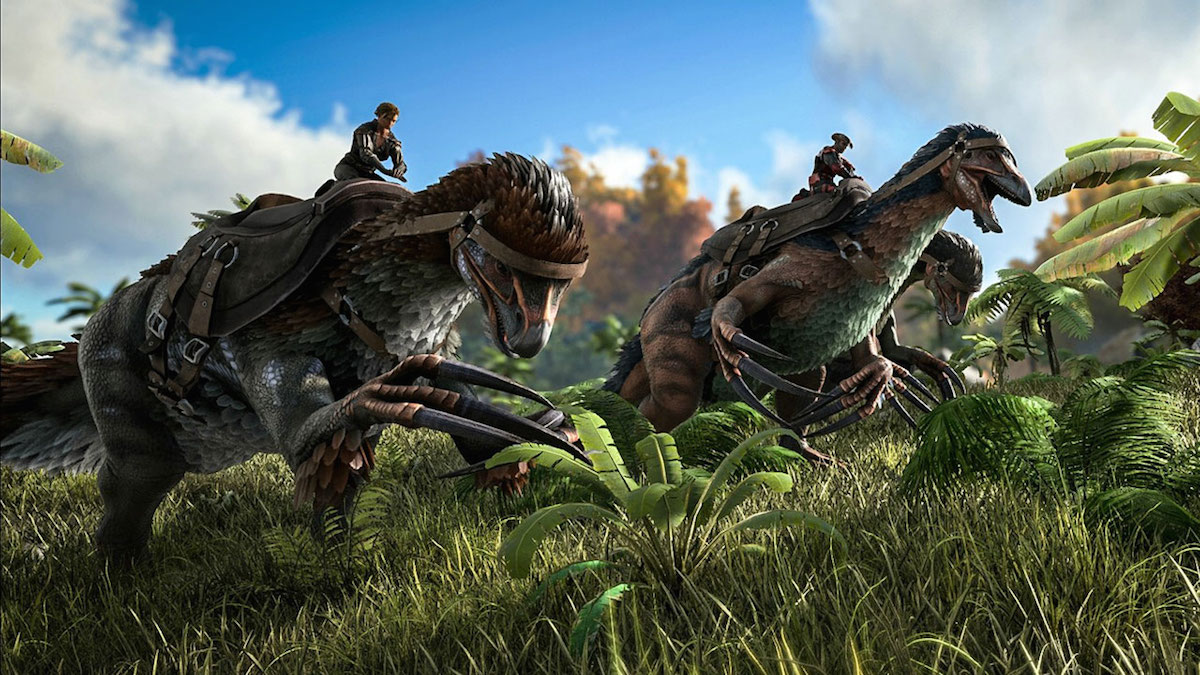 In his own words, orchestrating the music to Ark: Survival Evolved felt initially intimidating, but as he describes, the result is indeed both gargantuan and beastly in its narrower detail. Ironically then, it’s the music itself that becomes the intimidator — crashing and yelling and generally throwing itself to the listener’s ear in a mix of malice, antagonism but natural survivalism. That’s not to say that that very same heartfelt connection isn’t present this time round; what Coker focuses on this time — especially for a game of such significant scope and equally-grand media and public attention — is less an emotional response based on narrative and situation, but instead on the general principle and very state of Ark’s game World. After all, this is a fictional realm in which ordinary human beings can, with the required allotting of courage and fierce determination, tame a very many assortment of dinosaur species and other wild fantastical creatures. Or, in the process of doing so, die trying.

There is of course the PvP element to consider as well — as is to be expected from the pre-conceived “survival” catalog where base-building, item management/gathering and crafting are key — and as such Coker’s use of bellowing brass sections and sweeping choral voices does flow back into that traditional (and perhaps cliched) reflection of grand masses, perilous confrontations and the chaos that likely ensues. The difference though — and one that prevents Coker’s sound from slipping into that same generic pit — is the way he presents these sounds, these very instruments in fact, to the listener. To go back to the previous point about music that manages to resonate with both head and heart, where Ori’s sound design invoked an almighty teary-eyed sympathising at points, Ark’s design appears to be one of intimidation. Of standing above and over the listener, like the very many ferocious beasts that wander the game World. 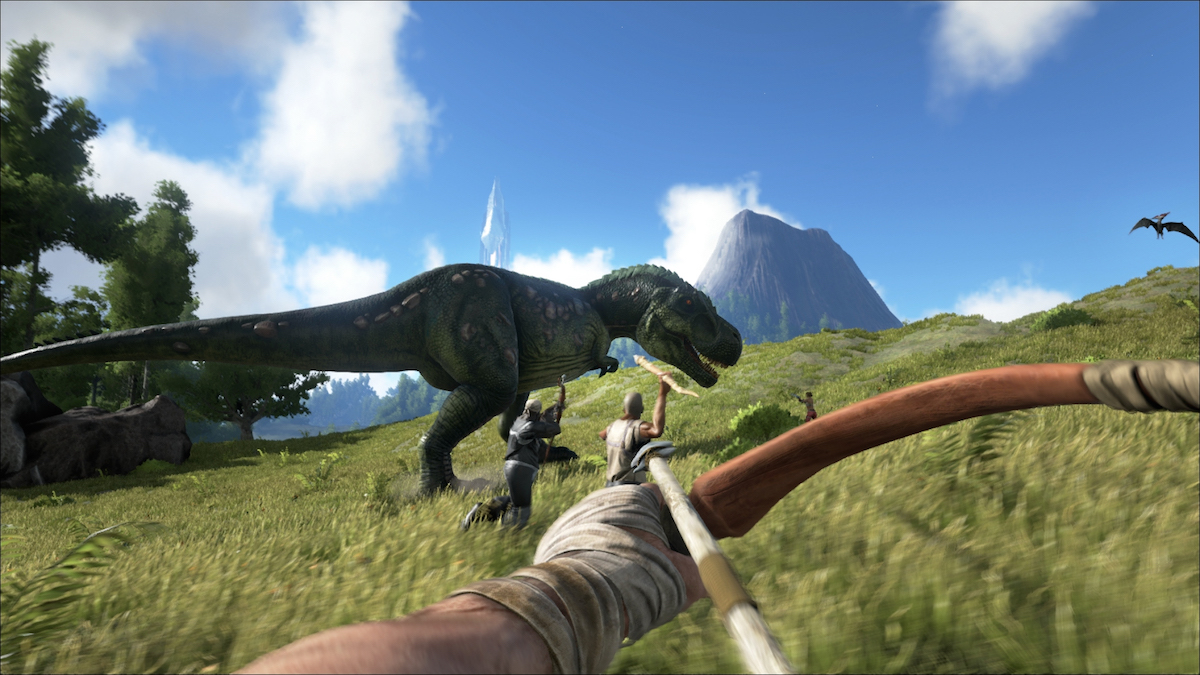 As such, the treatment of dynamics with this soundtrack — and the fact there’s seldom a moment where the music swing backs towards piano (very soft) or even mezzo-piano (half-soft) approaches — appears to orientate more around louder and rather climactic bursts. Cinematic perhaps, be it through the pounding tribal percussion or tight string motifs that never tend to let the music have a moment of respite, but the most crucial thing that underscores it all, structurally, is the way Coker manages to blend all sort of deviation in phrasing and chord progression to, somewhere somehow, invoke a kind of stressful, chaotic environment much like the wild lands of Ark itself. Yes, it’s easy to point out the typically sudden (for lack of a better term) “da-dada-da…DA-DADA-DA” upswing in intensity for certain instruments, but at the same time, a lot of the sounds Coker brings forth don’t feel at least like they’re being carried on a conventional path.

Where Ori’s melodies and rich, sweeping sounds often lead towards a whammy of a mood-swing (be it happy or otherwise sad), there’s a kind of perilous uncertainty and danger that underpins Ark’s music. One that dangerously lends itself to a harrowing mix of musical phrasing, motifs and crescendos that in fact aren’t at all detrimental to the music being created, because in the end, that seems to be the underlining objective. To illustrate how dangerous and how hostile the World of Ark can and most likely will be for anyone who steps foot in it. Like the game, just when you think you have a handle on where the sounds will lead and/or take you — when you’re so confident that the track present will simply move up a musical key or chord for the sake of transition or “change” — Coker instead takes an alternative route. Building the instrumentation up more and more, carving out entirely new passages or melodies, even ditching the need for temporary calm in what most likely will be a scenario that offers similarly very little calm. 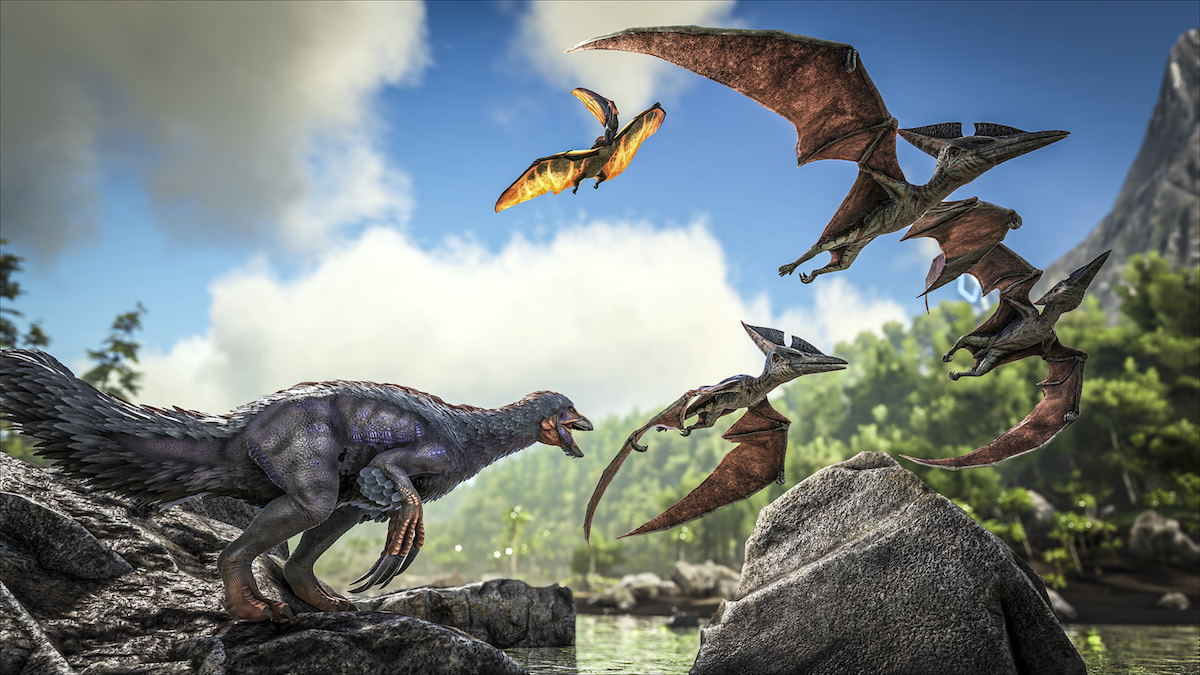 It’s a differing direction for Gareth Coker, one that admittedly invokes the same intensity of emotion and peril as in previous adventures, but this time insists on making itself be known in a much more menacing manner rather than a sympathetic one. It is indeed a massive undertaking to score a game like Ark: Survival Evolved, given the spotlight the game has had shone on its development, has been a bright if not constantly-affectionate one. But Coker undoubtedly steps up to the mark, carving out a musical identity that admirers of his past work can affiliate to, yet one that itself casts new light on the composer’s focus on small-but-effective passages to lead the way. Even if it means abruptly letting their presence be known to the listener from the get-go; for a game set in a World populated by the most ferocious and likely predatory animals ever to walked our own humble little planet, Coker’s intoxicating yet lush mix of instruments can’t be faulted with how brash and bold they can so proudly be. At the very least, given its size and its scale, it can’t be ignored.