It’s no secret that Stardew Valley has become quite the phenomenon in the gaming world ever since it launched last year, sucking in countless players to enjoy the farm life it offers. But being in the spotlight also guarantees that you will have shots taken at you and be joked about, and now we have what could essentially be called a full-on satire of ConcernedApe’s masterpiece, Graveyard Keeper. Another collaboration between tinyBuild and developers Lazy Bear Games, Graveyard Keeper sees you trading in the farm for…well, a graveyard, and gives you more options to do rather questionable things. And having had our hands on two different demos, so far it does look like this is shaping up to be one mighty fine game, parody or not, even if it is hard to judge.

The first demo had set up the basics. We play as a town’s local graveyard keeper, and had to find a way to fund things and keep everything going. Luckily, there just so happened to be large dungeon beneath the area near to our base of operations, allowing us to plunder it for various treasure and loot dropped by enemies. Combat is basically your standard Zelda setup, and it worked quite perfectly, getting the job done nicely. After that, we were given a basic introduction to autopsies, allowing us to dissect bodies in the same of science and profit, as well as getting used to bits such as the sleep cycle that starts the day anew. 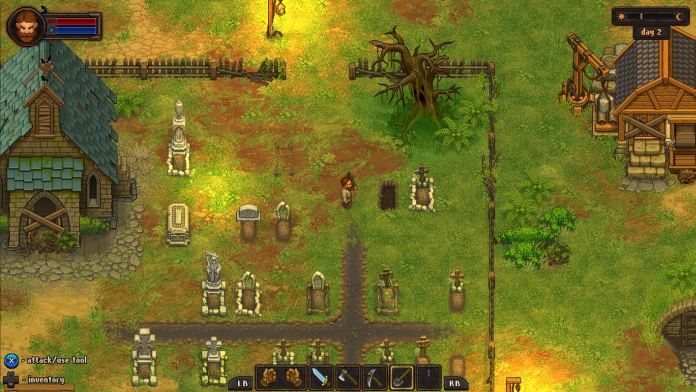 The second demo took place after attending and assisting with a funeral, where our keeper was instructed to head back and bury two bodies. Before this, though, we decided to prepare a quick snack with the assistance of our skull friend…that promptly gave the keeper diarrhea. And yes, after that, moving him around left a large brown trail on the ground for a while. Quite embarrassing, to say the least. This led into a section where we had to cure our ailment, done by performing autopsies on deceased bodies to get the organs and/or research needed, building a new crafting table that allowed us our harvest with other ingredients for the potion needed. After a change of pants, we headed out again to build some new plots for the bodies we had. After that, we had the freedom to do whatever we want…well, within the demo, which mainly meant being able to forage for supplies in the woods.

What has made these demos for Graveyard Keeper a bit tricky to work with, though, is that they don’t feel like they capture the actual management/simulation portions of the game as well as the the rest of the game suggests. The options to cut corners in burials, deal with ghosts, or make extra money by selling hot dogs made of corpse meat haven’t included yet, so save for the above brown-stained scenario, we don’t have a larger feel when it comes to Graveyard Keeper’s overall sense of humor and craziness. For that matter, we haven’t seen any of the more deeper or tense parts that come with running a business like this as well. Still, everything else so far has worked quite fine, providing some solid, fun, gameplay. 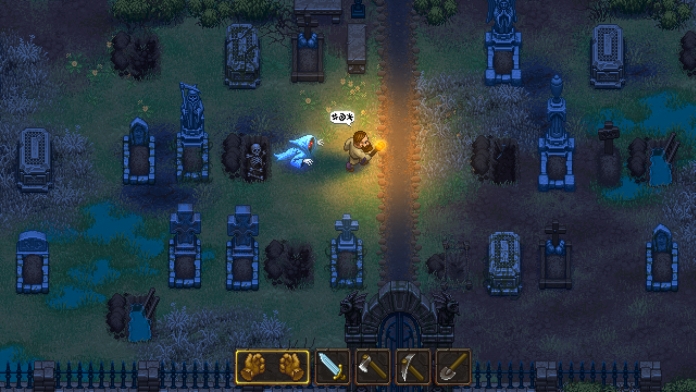 Even just as a standard simulation game with elements of exploration, crafting, and dungeon crawling, Graveyard Keeper still appears to be funny and terrific game, even if you do have to accidentally darken your pants as part of the tutorial. And even if it was never meant to be a satire, it’s coming together as a twisted little sim to look out for when it comes out for the PC in the future (or if you can’t wait, you can sign up for the alpha now on the game’s site).