Upon first glance, one may not consider Pikuniku to seem like your standard Devolver Digital game (well, assuming they hadn’t seen The Swords of Ditto yet). After all, it’s a brightly-colored 2D platformer with a style reminiscent of quirky Japanese games such as LocoRoco, taking place in a world where all of the (literally) colorful inhabitants are constantly happy, if only because the mayor keeps demanding it, forcing people from leaving their village where there security cameras watching them at all times in a dystopian world, and yeah, now you can see why Devolver Digital would be interested. And so here we have Paris-based developers Sectorhub delivering this colorful title with a comedically sinister edge lurking beneath it that has the potential to be one of 2018’s sleeper hits.

Playing as a character that can only be described as an oval with legs that moves the an anthropomorphic version of one of those sticky yo-yo-like toys that you get from a vending machine, you come across a chance encounter with some new friends, and their dilemma that you help solve leads you to their town, where the latest festival is being held…again and again, on a daily basis. The mayor of this town seems deeply obsessed with keeping everyone happy and upbeat, and after getting acquainted with you, suddenly grants you an entire house with the intent that you will become a permanent resident, and it’s at that point that something crossed my mind…is this all meant to be a riff on Animal Crossing?? 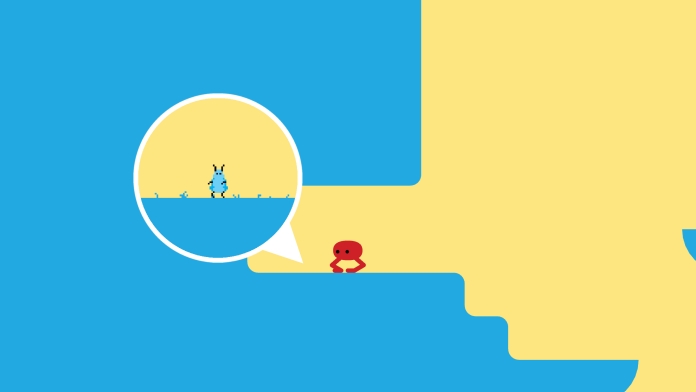 It seems like an odd comparison to make, especially since Pikuniku and Animal Crossing are completely different in terms of style and gameplay, but it’s hard not see the cult-like devotion to building an ideal town and not be reminded of Tom Nook and company at times. Then again, this could be another one of those cases where I overthink things, and this could all just be a coincidence. Still, the assortment of quirky villagers also delivers a lot of the game’s charm and humor, along with little vignettes such as those involving microscopic insects that you discover, and the blatant dystopian elements such as robot guards (that still blow up when exposed to a logic bomb).

We haven’t even gotten into Pikuniku’s core gameplay yet, though. At its heart, its a puzzle-platformer with some elements that are physics-based, mainly the ones based around your character’s ability to retract their legs and roll around at a faster speed. You have the ability to perform a kick that can move objects around or activate buttons, a grappling move, and the ability to zip along various wires, among other things. Not only does this allow for the means to solve several different and fun puzzles, but they also provide the means getting around each area. The world here is quite vast indeed, with several large platforming sections with a lot of hidden areas. Exploration is the name of the game here, being able to discover new secrets hidden all over the place, ranging from new locations to more hidden bits of humor. 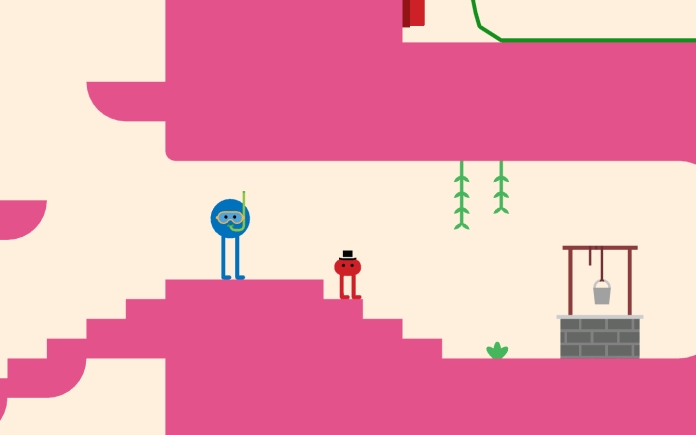 With its simplistic, cute style contrasting with a dark yet humorous tale contained within, terrific platforming with great controls and a lot to do, and a co-op mode that should make for some top-notch shenanigans with friends, Pikuniku looks like it may be one of next year’s quirkiest and best adventures, although whether or not it’s as good of a possibly unintentional Animal Crossing satire may be a more interesting thing to wait for. We’ll see if it is indeed a good-hearted jab when it comes out for the PC and Switch (appropriately enough) in 2018.