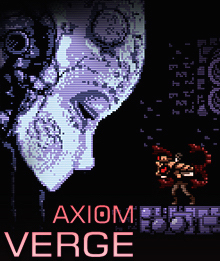 Axiom Verge came out a couple of years ago and proceeded to be the Super Metroid sequel everyone had been wanting while still carving out its own strong identity.  The basics of its inspiration were all in place, with music and art that instantly recalled the SNES classic, but the adventure of lost scientist Trace had more than enough style of its own to avoid being a simple clone.  After a release on PS4, Vita and PC, the game won a respectable number of awards, showed up on a few Best Of lists and then began the process of aging into a fan favorite.  Now Axiom Verge is available on the Nintendo Switch and while it’s the same game as every other platform, it manages to feel like the near-perfect union of game and console.

Trace was the lead scientist working on some type of energy experiment when everything went wrong and an explosion tore through the lab.  He wakes up in a strange place where disembodied voices prod him into action, pointing him towards a gun and then giving him one task after another to bring the giant mecha-heads back to full functionality.  Something has gone very wrong, and the bosses all calling him “DEMON!” aren’t helping.  They’re obviously sentient and very displeased with him for no obvious reason, and these mysteries get slowly untangled as Trace works his way deeper into the huge, interconnected alien world of Sudra.

Exploring Sudra is going to require the usual Metroid-like progression from being a low-powered adventurer to having a tool for every situation, and Axiom Verge has a huge variety of items hidden just about everywhere.  Guns fire in different patterns, new tools become available at a regular pace, hidden health and power enhancers do their usual thing, texts fill out the story, and a personal favorite is the permanent power-up that increases the size of Trace’s bullets.  There are useful items everywhere ranging from major new abilities to health fragments, and experimenting with the options to find the hidden ones turns up results often enough that it rarely gets boring to scour the walls for secrets.  When the reward is a new gun it makes it all worthwhile. 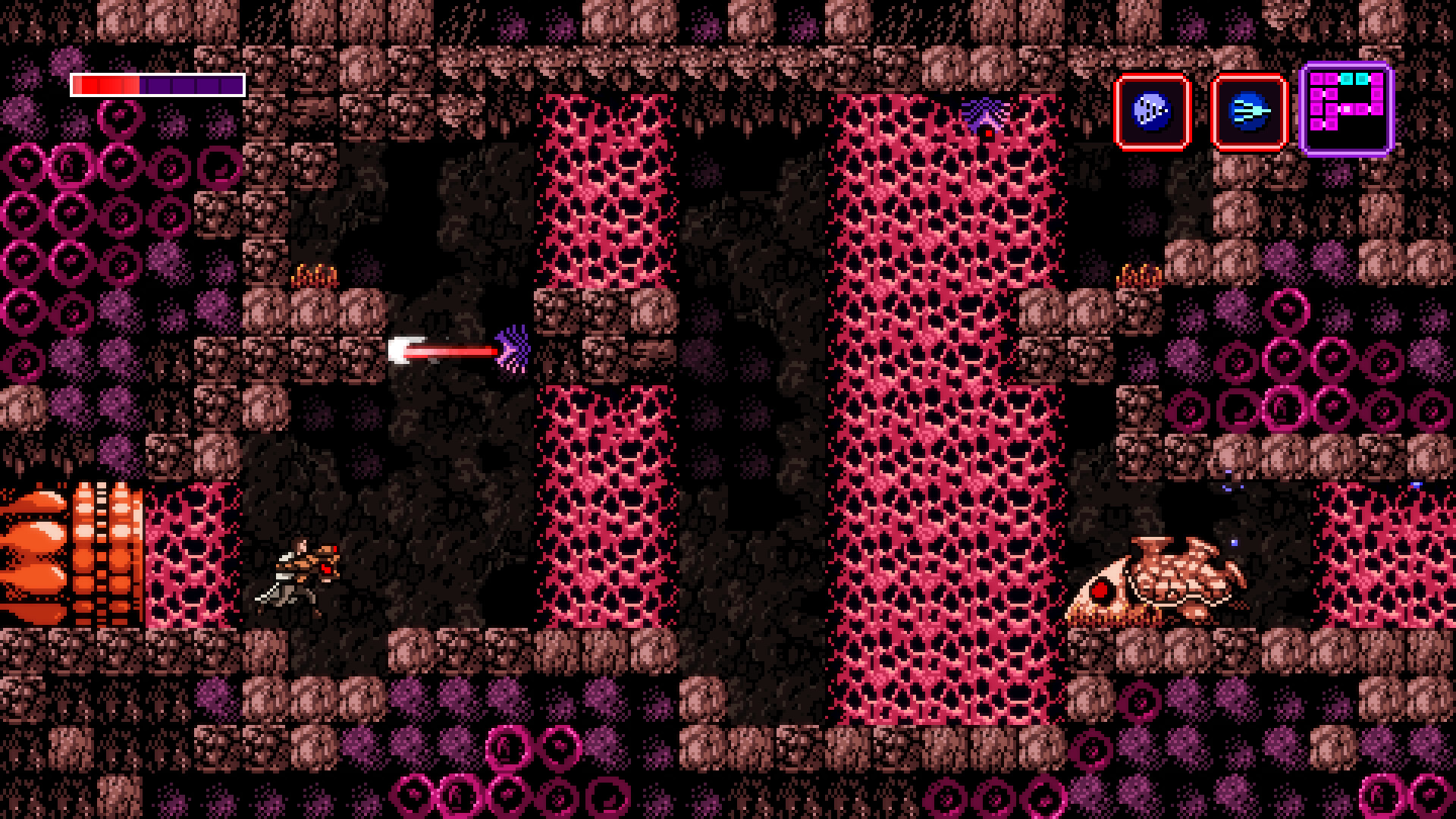 The first gun is sitting right out in the open, of course, because Trace can’t do much without it, but there’s an excellent arsenal of incredibly useful weaponry kicking around for those who take the time to poke in odd corners.  The first new weapon is a larger power-shot that explodes into fragments with a second press of the fire button, useful for hitting switches blocked by an angle in the wall, while later weapons really open up the combat possibilities.  The Firewall has a short range but drops a charge that shoots up a pillar of flame when it hits, useful for clearing a path when descending an area, while the Kilver is a short-range but intense ball of electrical energy that fires through walls, and incredibly helpful when you maneuver a barrier between Trace and his attackers.  One particular bout of exploration turned up the Hypo-Atomizer, which fires in a straight line but shoots two smaller bullets at a ninety degree angle to the path every few feet of travel, and it was just what was needed to clear out the boss encounter I’d been avoiding.  I found myself switching between guns on a regular basis, exploiting their strengths depending on the situation and frequently just experimenting for the fun of it.

While the caverns of Sudra are deep and filled with a huge variety of enemies that require constantly changing tactics as one area’s menagerie is left behind and a completely different set of hostile critters picks up the slack, shooting is only half of what makes a Metroid-like.  Exploration is equally important, and Trace picks up a constantly expanding set of skills to open up more areas and access secrets in the previous ones.  One of the main themes of Axiom Verge is the world is glitching, sometimes in big obvious ways and in other places more subtly, and many of Trace’s abilities play off this.  While the Laser Drill is just a drill (albeit made of lasers), good for taking down weak walls and a little short-range damage, the Field Disruptor plays off the glitching in fantastically creative ways. 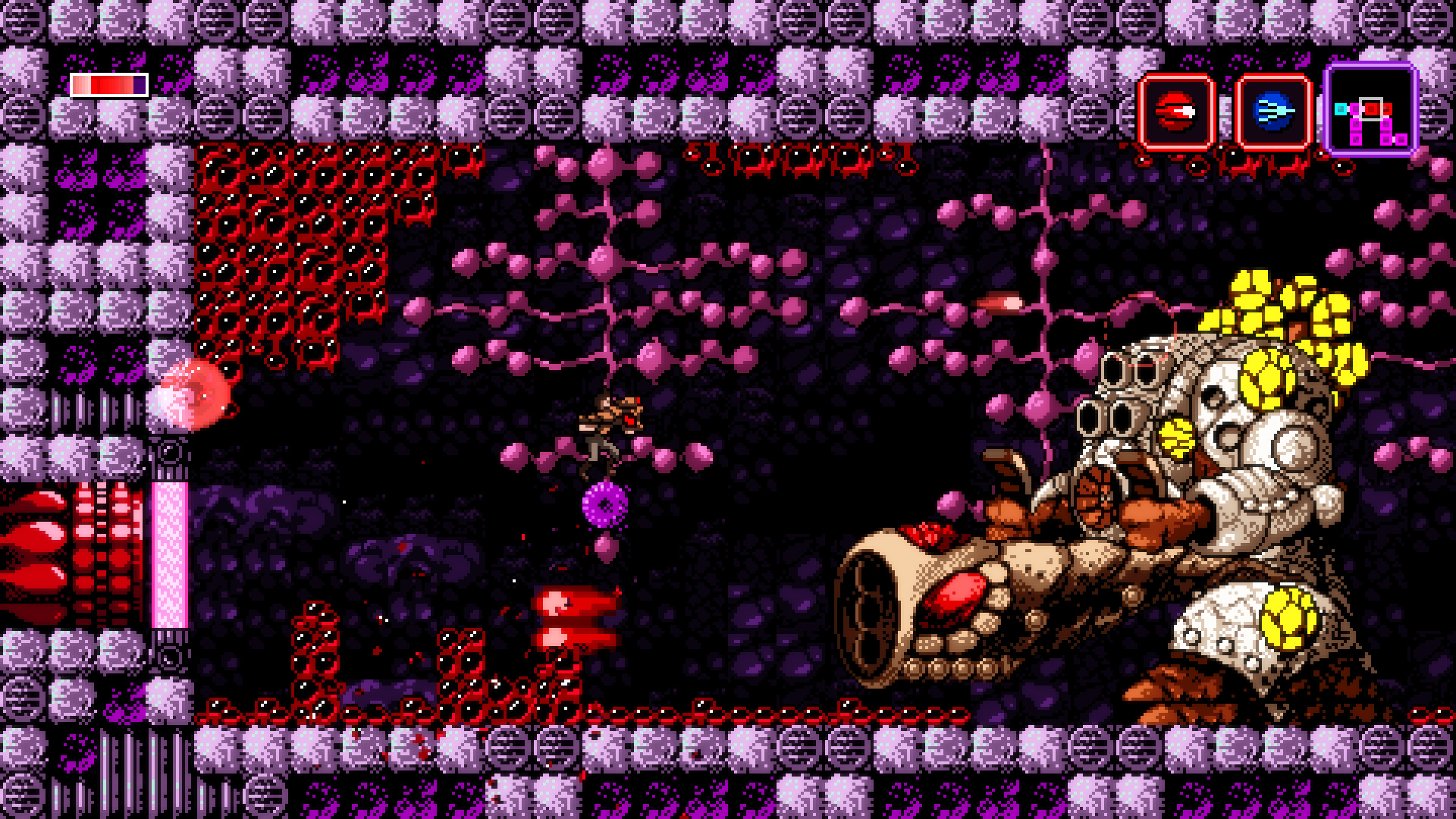 Glitched walls can be destroyed by hosing them down with it, but enemies are also susceptible to its effects and all of them react in different ways.  One of the first enemies you use it on starts breaking through destructible walls as it bounces around, opening up a new path to a hidden area, and this is a clue that you’ll want to try it on just about everything to see what it does.  Some enemies slow down, others turn into allies, invulnerable ones become vulnerable, etc.  Taking on the creatures roaming Sudra’s halls head-on is a bad idea even for a fully-powered Trace, but good use of the tools and other options not only enable survival but also turn up plenty of secrets along the way.

Basically, this is the same game it’s been everywhere else, but the Switch version feels like Axiom Verge‘s natural home.  I’ll admit that I never once tested it on TV, preferring handheld mode instead, but it played exactly as it should at full speed nearly flawlessly (a monster disappeared once without shattering when I killed it.  As bugs go, I’m not too worried about it).  The only downside to playing with the standard Switch controller is the positioning of the right stick, which is used to change weapons but is also just a bit too close to the B button used for jumping.  When the action heats up it’s easy to accidentally knock into it, bringing up a disruptive weapon select.  The game pauses when this happens, so no real harm done, but it interrupts the flow of the action in a way that gets annoying over time.  It doesn’t happen all that often but I found it frequent enough to get obnoxious, and those with bigger hands are likely to see this happen more frequently.  It’s also possible that I’m just clumsy.  Either way, while this is more hardware design than an issue with Axiom Verge itself, it’s still something to keep in mind and work around. 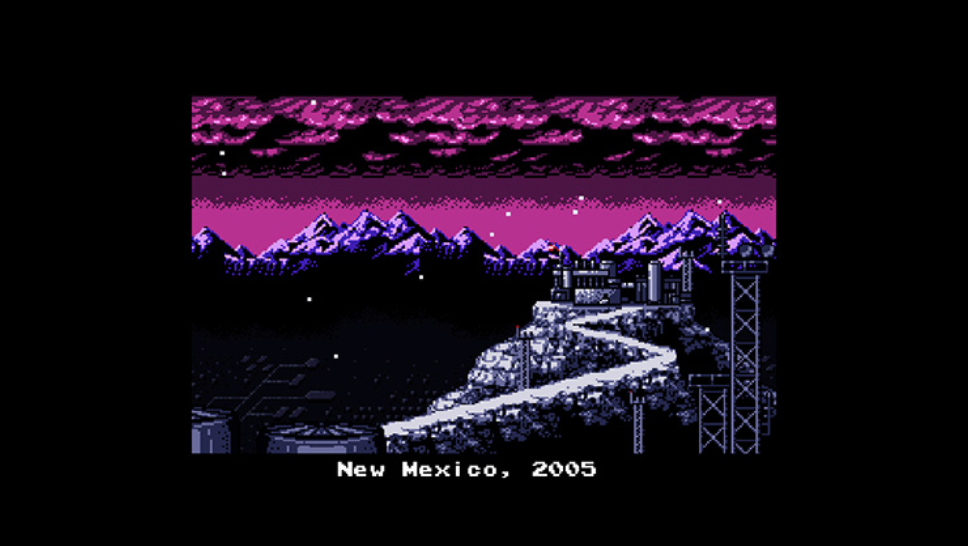 Axiom Verge was already one of the best Metroid-style games in years and it lands on the Switch like it belongs there.  The game is endlessly creative with new enemies, weapons and tools, making each new area a fun challenge to explore while giving plenty of reason to revisit the older ones.  The huge, detailed bosses can seem insurmountable at first, but give up their patterns after an attempt or two, and good odds of receiving a new ability afterwards makes the fight worthwhile.  Axiom Verge is a throwback to a SNES classic, bigger and more detailed in its art and effects than that system could ever hope to handle while still looking like a game that might have found a home there, with music and sounds to match.  It hasn’t gotten any less excellent over the last few years, and whether you’ve played it before or never gotten around to it until now, Axiom Verge earns every bit of space on the Switch’s memory card.