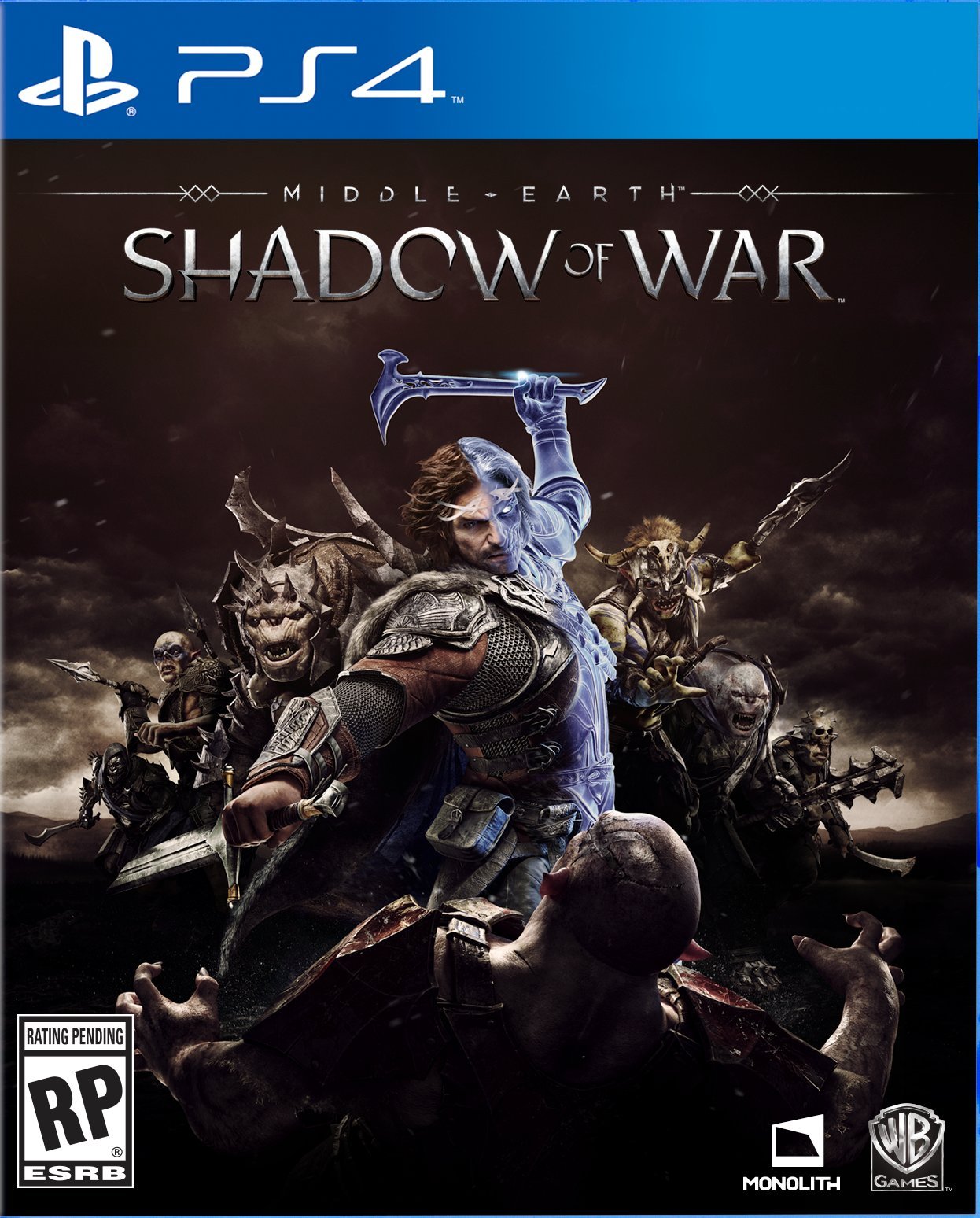 Despite owning one of the most valuable IPs in the world, Warner Bros. Interactive Entertainment had done surprisingly little with The Lord of the Rings after acquiring it from EA in 2009. Then in 2014, Monolith released Middle-earth: Shadow of Mordor. Despite making significant changes to Tolkien’s lore, Shadow of Mordor delivered solid gameplay and an innovate new mechanic, the Nemesis System. Today, Monolith is back with Middle-Earth: Shadow of War to provide a more in-depth story, bigger setpieces and a revamped Nemesis System. Is Middle-Earth: Shadow of War an excellent romp through Mordor or does it fall to the corruption of the Ring?

Shadow of War takes place shortly after the events of Mordor. Talion and his wraith companion, Celebrimbor, have forged a New Ring to combat Sauron. Things quickly go awry, however, when Shelob (in the form of a provocatively-dressed woman) takes the New Ring and reveals that Sauron and the Witch-King aim to take Minas Ithil and its Palantir. To defeat Sauron, the duo must raise an army, reclaim the New Ring, foil the Witch-King’s plans and ultimately wrest Mordor from Sauron’s grip.

The narrative is pure fan-fiction nonsense. While lore purists will be unable to stomach some of the mind-boggling decisions made by Monolith, even casuals will come out puzzled. Why was the spider who tried to eat Frodo now a beautiful woman? Isildur was turned into a Nazgul? As an adaptation, it’s okay to take some risk and make changes, but Shadow of War goes too far and ends up creating a puzzling mess. The plot remains directionless and feels more like a greatest hits album made up of key events from Peter Jackson’s The Lord of the Rings Trilogy. Remember when Gandalf fought the Balrog? Well, now you can fight one. What about that time when Aragorn fought off five Ringwraiths on Weathertop? How about you battle eight. Oh, and wasn’t that siege of Minas Tirith amazing? Now you can lay siege to fortresses. 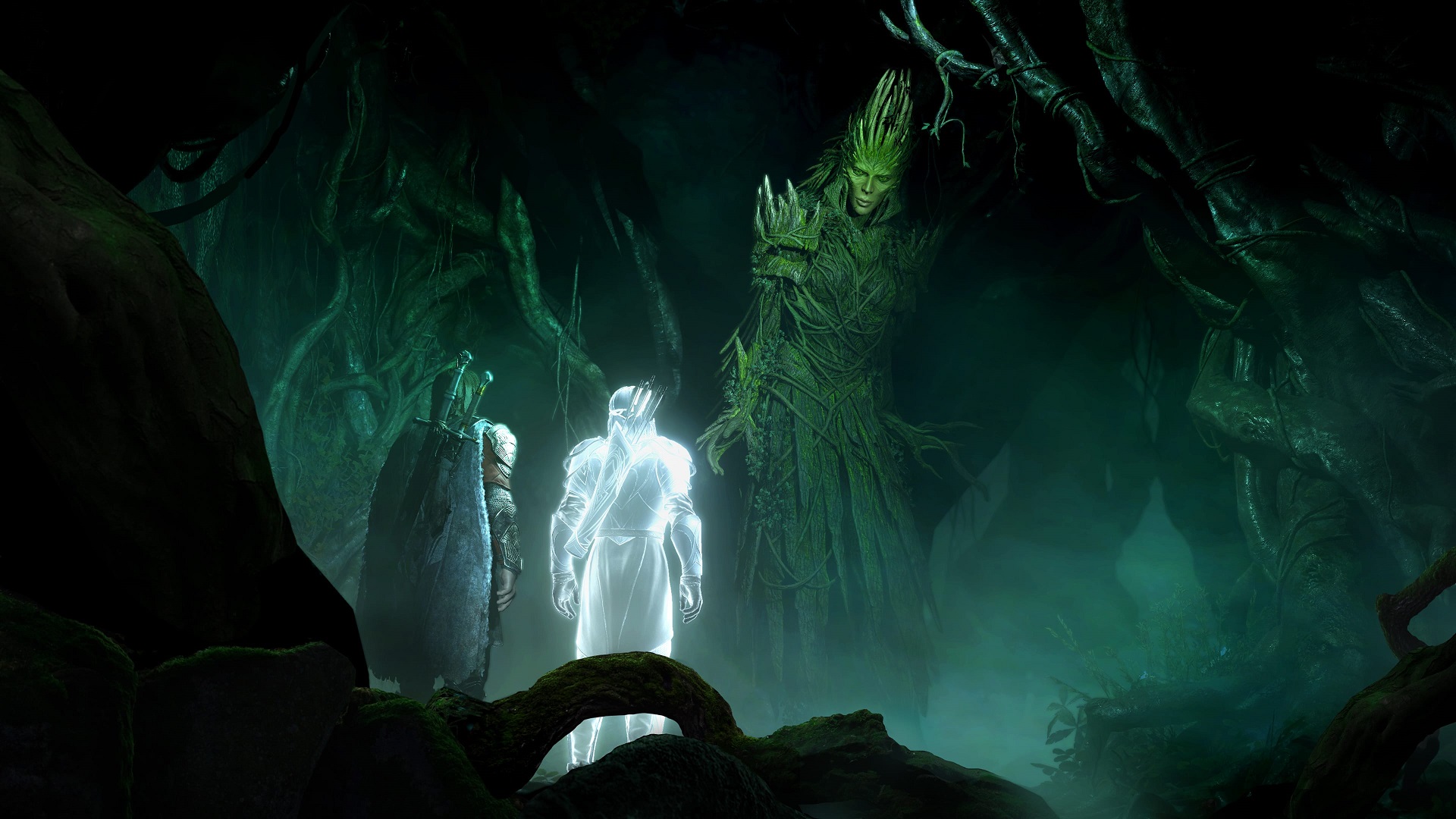 Part of what’s holding the narrative back are the characters. Talion and Celebrimbor’s solo interactions are a real highlight, but the secondary characters they mingle with have little personality. Characters like Idril and Etariel come and go so quickly that there’s little time to get to know them. Indeed, most of the personality comes from the random orcs you’ll meet on your journey.

Still, the plot gains enough momentum at the end to deliver a satisfying conclusion. Addressing criticism of the first game’s ending, Shadow of War ends with two spectacular, though easy, boss fights. It would have been a fantastic way to wrap up the campaign, but for some reason, the campaign continues with Shadow Wars. Act IV strips out all narrative threads and forces players into a long slog of grinding and repetitive missions to get the true ending. It, unfortunately, kills any momentum the game successfully created at the end. 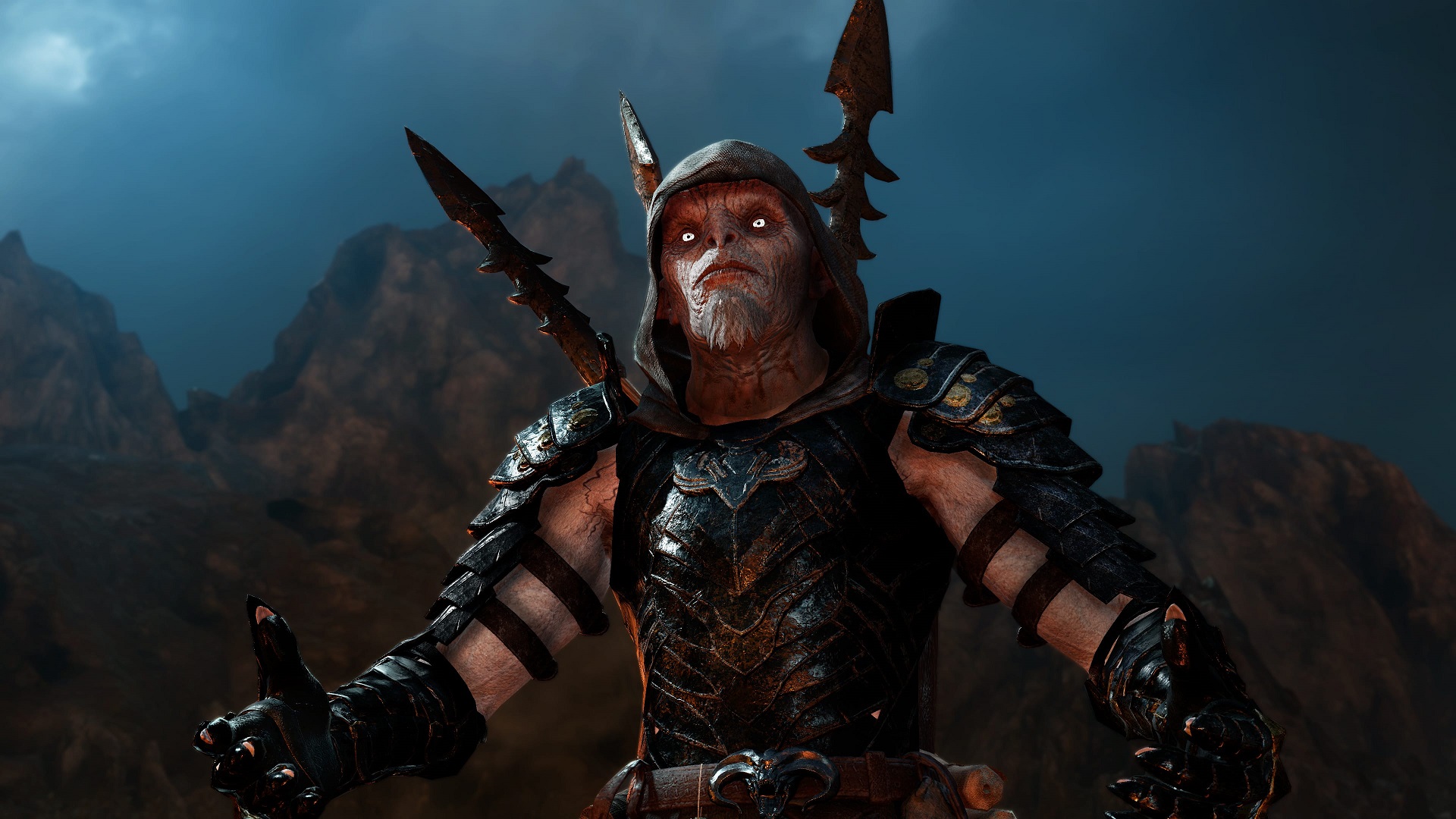 Narrative woes aside, Shadow of War does succeed in the same way Shadow of Mordor did. Your primary goal throughout the game is to capture orcs, lay siege to fortresses and wrest control of Mordor from Sauron. Nemesis has been overhauled to be more dynamic and random than in the first game. Strengths, weaknesses and personality traits are better defined and more robust. You have serious, funny and even deranged orcs. Somehow, these mindless killing machines have more personality than any human character.

Learning how to adapt to an orc captain, warchief and overlord’s strengths and weaknesses can be the difference between life and death. Planning an attack requires preparation typically not seen in hack-and-slash games. Your struggles to capture captains and slay warchiefs all culminate in a large-scale Siege battle where you must systemically capture parts of the fortress before challenging its overlord. These battles deliver some of the most exciting and pulse-pounding moments in Shadow of War, but they can get tiresome in Shadow Wars where that’s all there is to do.

Shadow Wars involves an additional 20 Fortress Siege/Defending missions and the repetitive nature of this Act almost destroys what makes Shadow War so amazing. Facing high-level enemies, players are forced to hunt for more and more powerful orcs to replace weaker ones and the randomness ensures that you’ll be looking for a long time. It becomes a huge time sink with little to push you forward. Even things you’ll have once enjoyed, like the game pausing everything so an orc captain can spew some dialogue at you, becomes so tedious that you wish it weren’t there. Shadow Wars is a mode that seems intentionally designed to test your patience or get you to open your wallet. Shadow Wars really should have been removed from the game or sharply shortened. 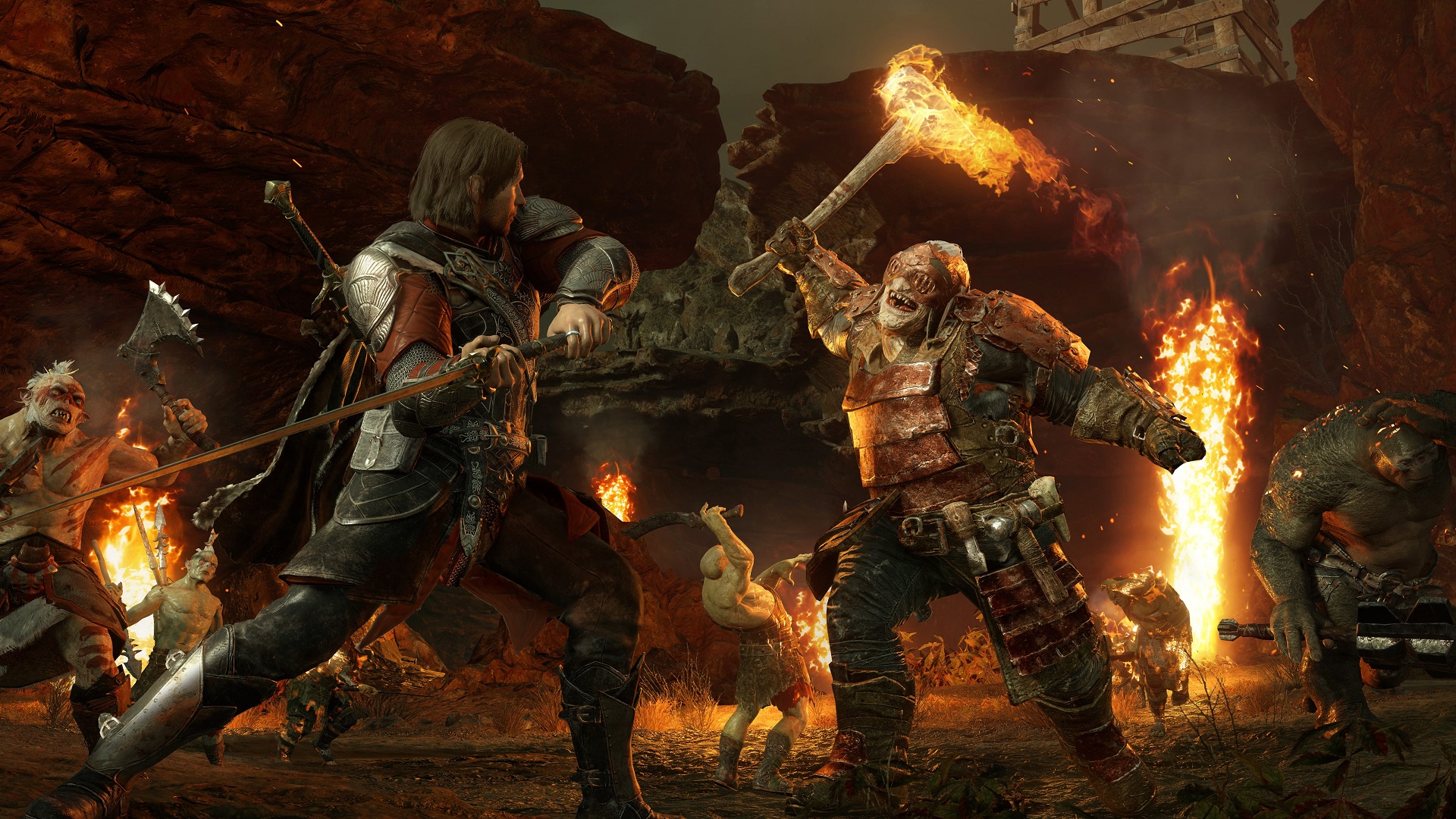 Thankfully, playing Shadow of War remains enjoyable. The sequel uses the same free-flowing combat the first game employed and it’s still a joy to use here. It’s simple, intuitive, but also has the necessary amount of depth to make mastering the system a good challenge. The only real problem with the combat is the camera, which can become quite the issue when there are too many enemies on screen at once. It can become quite difficult to distinguish what exactly is going on. Considering this has been an issue since Batman: Arkham Asylum first implemented free-flow combat back in 2008, it’s disappointing there still hasn’t been a fix. Yet, playing Shadow of War remains fun, and pulling off a 100-hit combo laced with brutal takedowns is always as enthralling as ever.

Shadow of War also introduces a slew of RPG mechanics and allows players to customize their Talion better. From equipping swords, knives and armor, players will collect Gear throughout the game that provides boosts in stats and bestows special abilities, such as a chance to set enemies on fire. Additionally, different gems can be equipped with weapons to increase damage, suck extra health from enemies or increase the amount of Mirian you earn. Each piece of Gear and every orc has some rarity associated with it, which ranges from Common to Legendary. The rarer, the better perks that come with it. All of this adds a fun dynamic that can be earned through playing the game, thank goodness.

Probably the most intimidating aspect of the RPG mechanics are the skills, which is mostly due to the overly-complex skills menu. There are six skill trees, around four or five skills within each tree, and then about three sub-skills for each skill. It’s a lot to keep track of and you’ll find yourself accidentally skipping over a more useful skill because you might have inadvertently missed it. It’s an insanely complex system that proves that having more options is not necessarily better. After all, no one needs so many different ways to build up their Might meter. 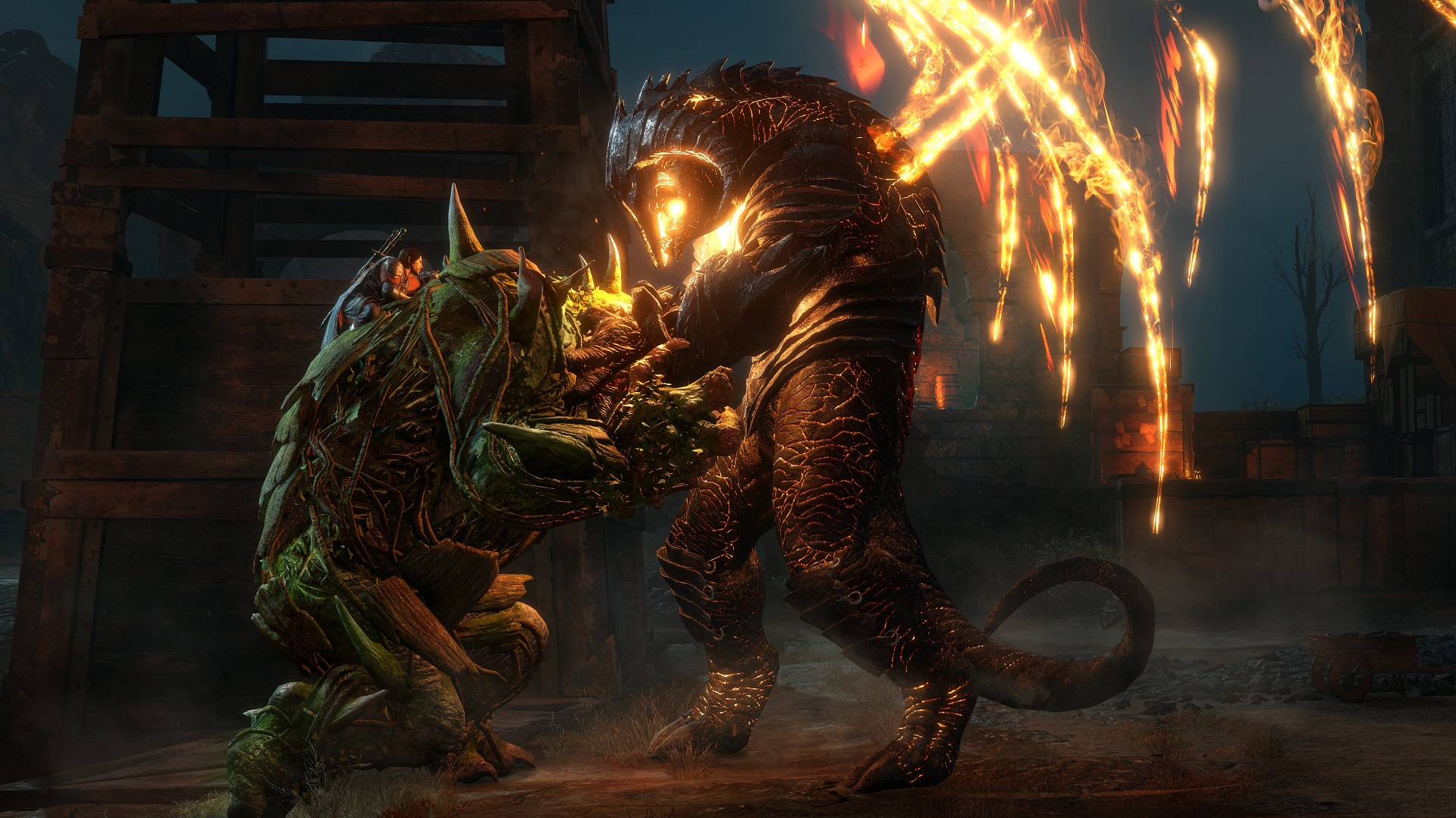 Probably the most controversial addition to Shadow of War are the microtransactions. Players can use in-game currency called Mirian to purchase silver loot boxes and real-world money to buy Gold, which is used on gold loot boxes. In Shadow of War, it is a fast way to get Epic and Legendary orc captains without actually playing the game. It’s a disgusting addition, but Monolith doesn’t flaunt it in your face like some other games. At only one time during the campaign does the game prompt you to open the Market. The microtransactions shouldn’t be here, but at least they aren’t being rubbed in player’s faces.

Regarding presentation, Monolith has built a world with breath-taking artistic direction. Players who are used to the ashen landscape from the films will be surprised to know just how unique the different regions of Mordor can be. From the snowy mountains of Seregost to the lush jungles of Nurnen, there’s a lot to see throughout your playtime. With five unique maps to explore, players will see sides of Mordor they know and those they had no idea existed before.

Unfortunately, numerous graphical issues hurt what is an otherwise pretty game. It’s not uncommon to see Talion’s sword performing acrobatics in mid-air when the camera zooms in, Talion cutting ropes in mid-air when trying to save allies or NPC orcs facing the wrong direction when they’re clearly supposed to be talking to you. Shadow of War also suffers from quite a lot of texture pop-in. It’s still a pretty game, but there’s enough issues here to take players out of the experience. 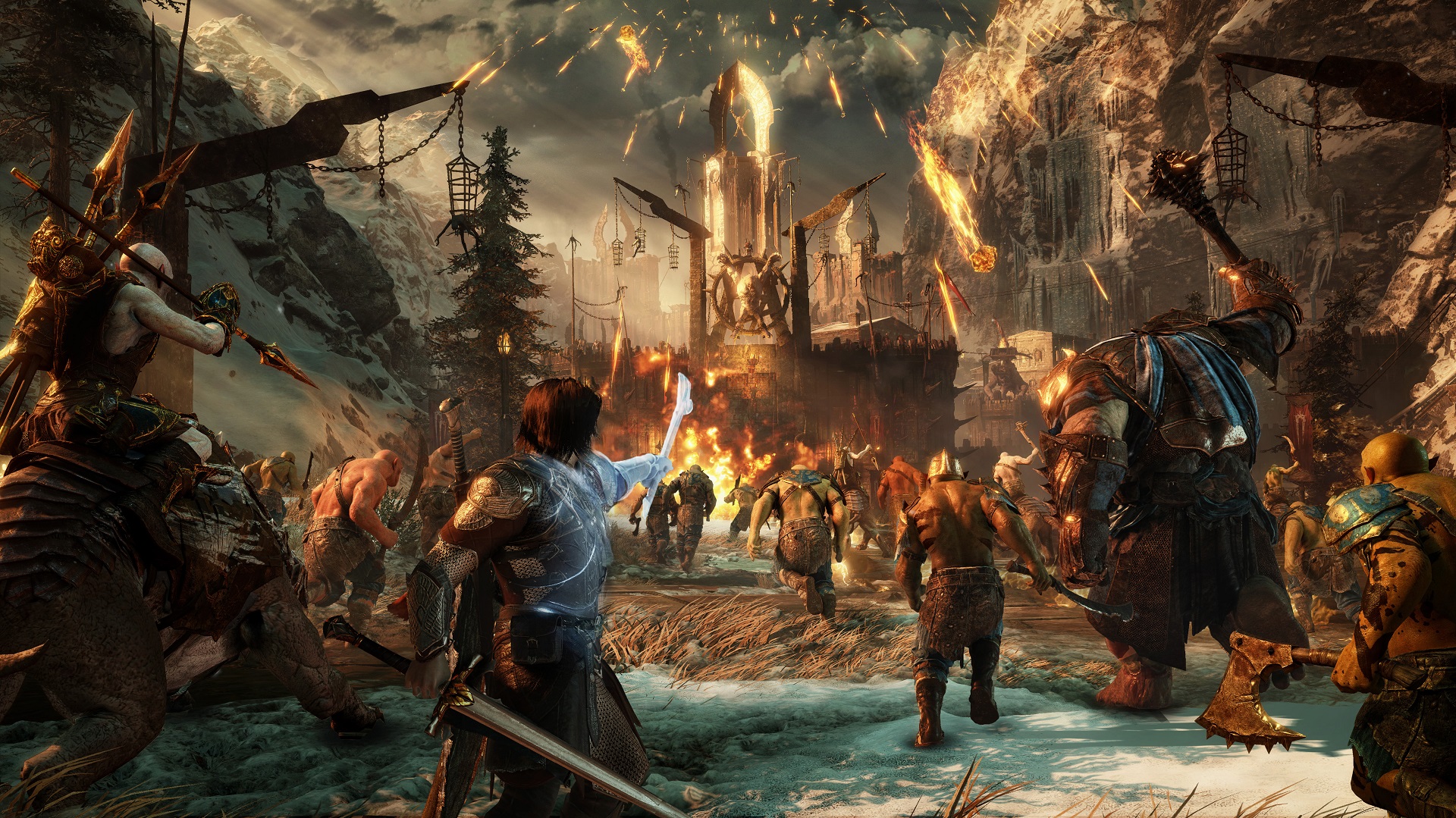 Middle-earth: Shadow of War aims for the spectacle of the films, but falls short with a directionless, lore-breaking campaign. It piles more and more upon players and almost loses itself in the excess. Thankfully the core of the experience, the Nemesis System, remains as entertaining and addictive as ever. Roaming Mordor at your own leisure, capturing orcs and building a vast network of captains, warchiefs and overlords remains a compelling experience, while the introduction of Fortress Sieges adds a new wrinkle to the system that is enjoyable to pursue. The visuals could have used more polish to hammer out some of the graphical issues, but Monolith has made exploring Mordor a feast for the eyes. Middle-earth: Shadow of War is a fun game, it’s just a pity that it drags itself out and didn’t end where it should have.