One of the greatest toys ever made is the wooden train set. Plop down the tracks any way you’d like, set up the scenery and deliver make-believe cargo to wherever had been designated the goal. There were limitations on this, though, thanks to things like parental budget determining the number of available pieces, or the laws of physics making it difficult to build a multi-level tribute to impractical design, but within those limitations could be many an afternoon spent putting things together and tearing them apart, usually ending in a horribly violent manner as the train flew off the trestle and into a ravine filled with TNT. Conducting a train is a truly hazardous career choice when an excitable 10-year-old is in charge.

Tracks: The Train Set Game removes the limitations of expensive reality and gives you as many wooden rails as you could ever hope to set down in a giant, open area. It’s primarily a toy, designed to let you build whatever intricate setup you can imagine, and to get the most out of it you’ll need to bring some creativity to the open canvas of the blank white space you start in. There’s a train sitting on a piece of track, a toybox full of scenery a key-press away, and that’s everything. And then you click the mouse and another piece of track is added, and you’re off. 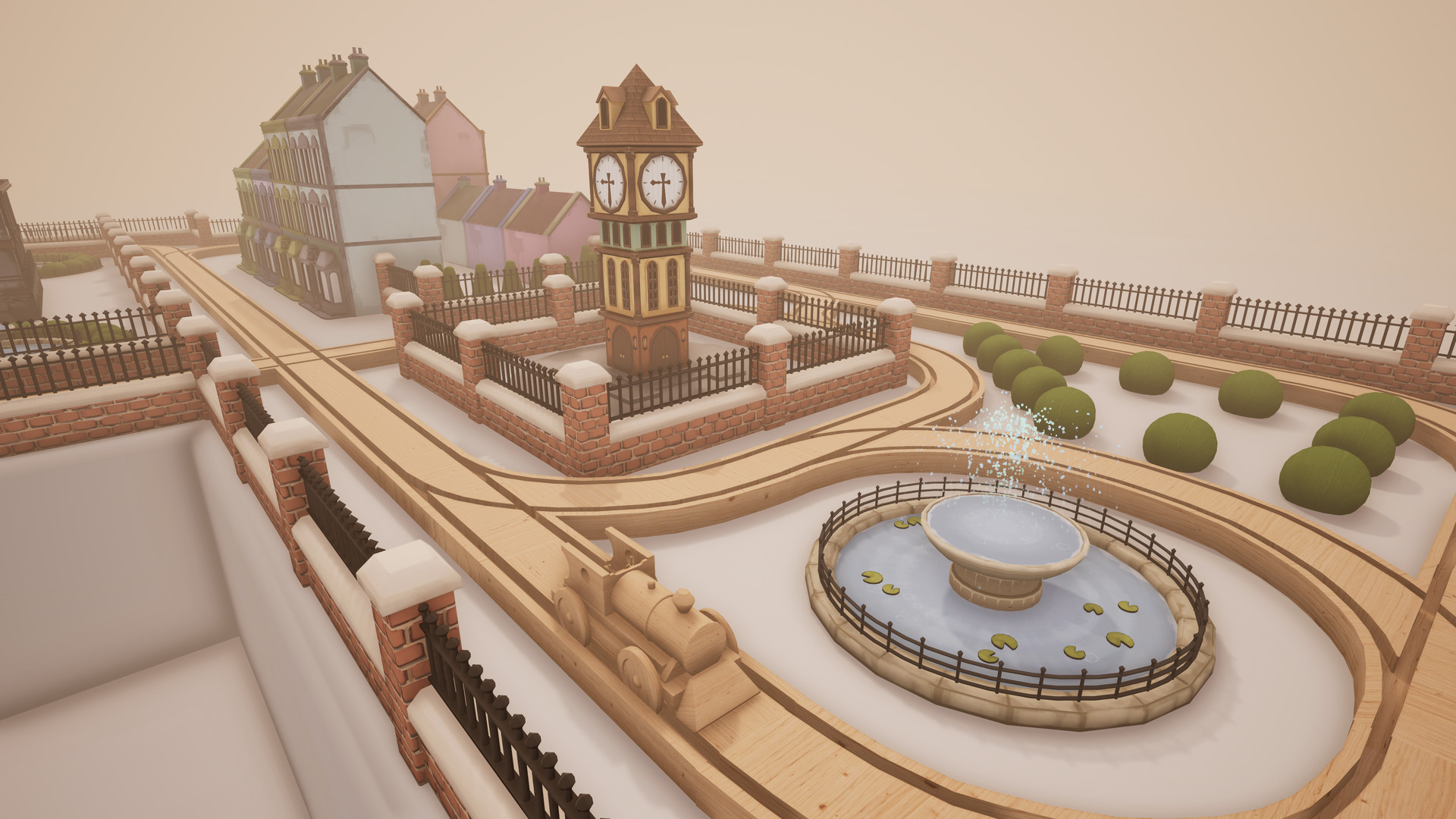 There are a couple of ways you can approach turning the big white Nothing into a play-area to be proud of. The first way is to pop open the toybox and start placing houses, trees, fences, and other scenery, then use the tracks to link it all together. The scenery automatically snaps to a grid that takes track placement into account, so there’s no wrong way to do it. Put a few terrain blocks around, maybe with a gap between them you can use as a tunnel, and you’ve got a nice basis for a village on a hillside. The terrain blocks are about the size of a couch cushion, so there’s not a lot of room for fine detail, but a little creative placement can lead to a surprising number of ideas for track layout.

The other method of track creation is to go rails-first, throwing down the line wherever it looks like it wants to go, linking up areas to create shortcuts, and then decorating afterwards. The results are a bit more chaotic but it helps them look less artificial too, even if you need to edit to the rail line to make it all fit right. It takes a bit to get used to the track-placement options, but once you’ve got the hang of it you can tear out and replace long stretches of track in seconds. 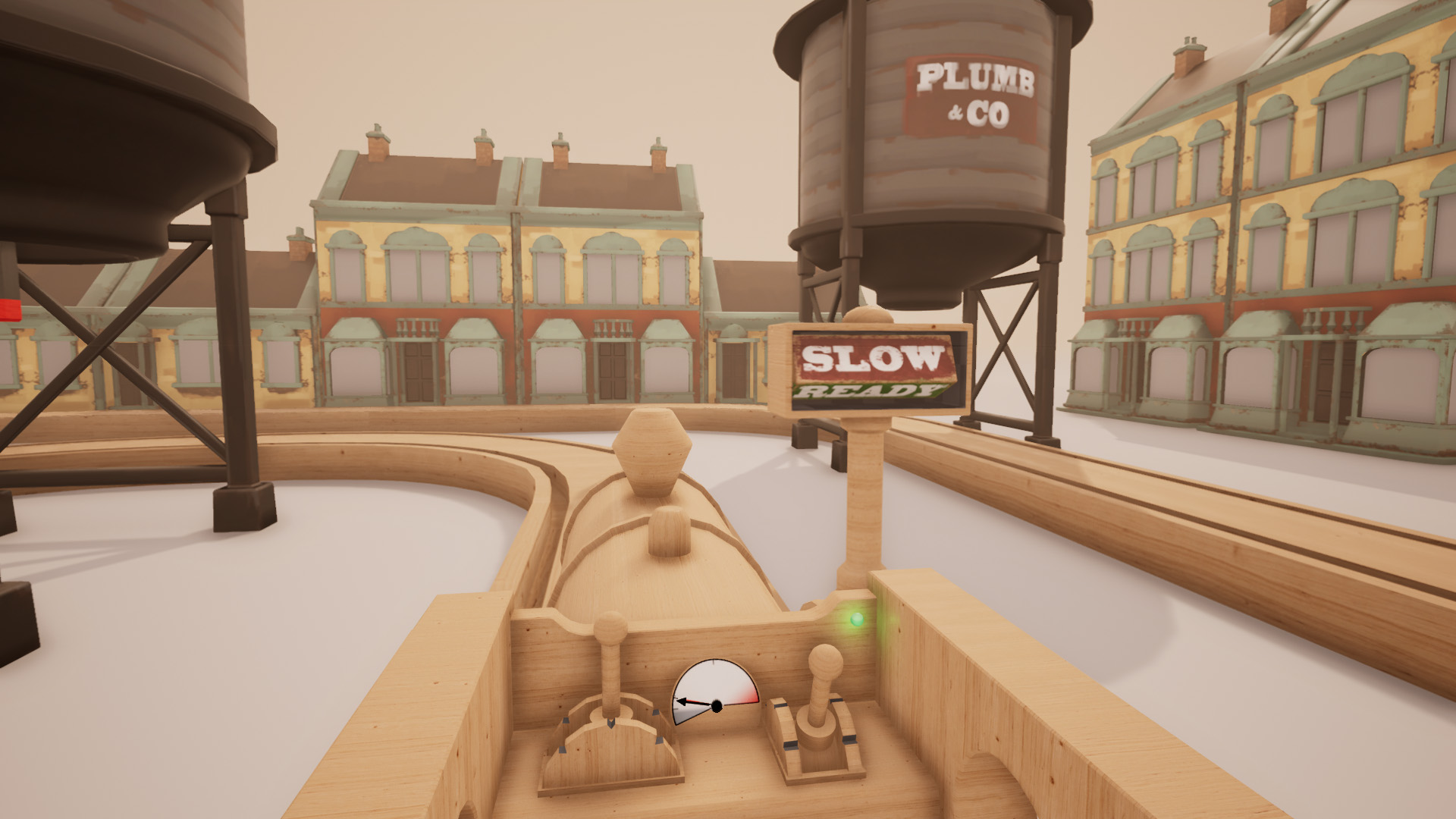 The basic track type is a straight, flat rectangular wooden block with two gouges in it for the train wheels, looking to be about eight inches long. Every time you place a piece another is ready to go at the end, highlighted in green to show where it will be. There are eleven types of track available (seven if you want to be picky and eliminate mirrored shapes) but that’s more than enough to build creations of surprising complexity. The default piece is a straight line, but moving the mouse left or right bends it to a ninety degree curve. Using the mouse wheel raises or lowers the end point, creating a hill, which has to travel in a straight line unless you use the special corkscrew piece available in the toybox. Intersection pieces let you join or diverge the track, and a special alternate piece lets you run two tracks in parallel and creates a short connector between them. Once you’ve built the track you can hop in the train and test out how it looks, trading the bird’s-eye view for a first-person perspective.

After that the room is yours to build in as you see fit. Create a stack of environment blocks ten tall and then erase nine of them to have a platform for a floating city. Build a hilly track and then strategically delete parts of it to create jumps, which the train will have no trouble landing with wheels aligned to the track grooves.  Place train stations and platforms then shuttle passengers from one to the other. Make a peaceful village and add a tower of blocks right in the middle of the track running through it, then send the train flying through at full speed to shatter the calm of the day.  It’s your playset and you can build as you’d like. 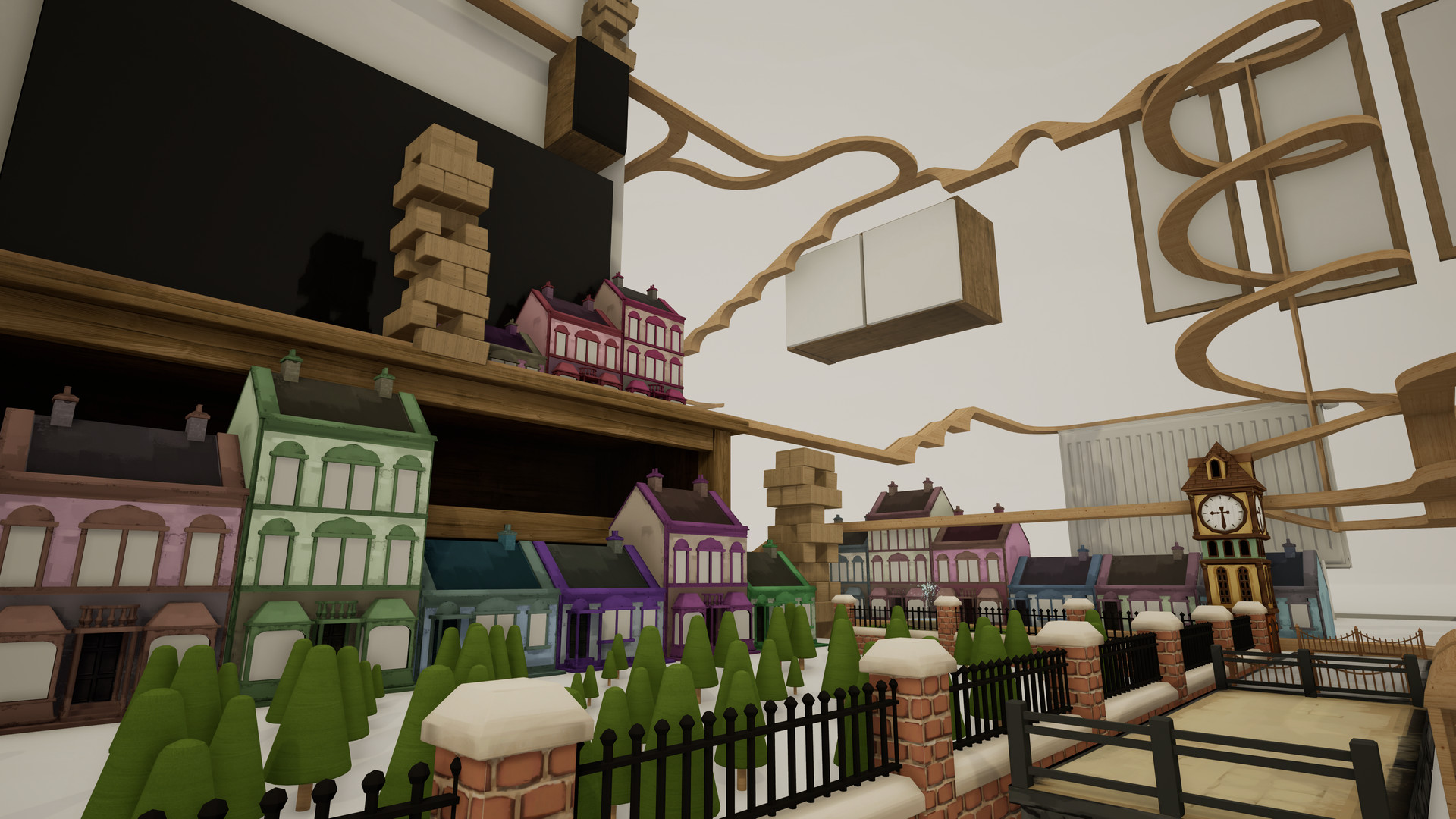 If you’re looking for a little more Game than Toy, though, Tracks has a Passengers mode available as well. The plain white room is one of two environments, with the other being a sparsely-furnished small apartment. The apartment can be used in free-play the same as the blank room, or you can activate Passengers mode to spawn little wooden people that you need to move to the nearest station. It’s just game-y enough to provide a bit of focus, but also fairly bare bones at the moment. The passengers spawn in a pre-set pattern, and while it’s fun to either optimize the rails or make a sprawling mess, once you’ve taken care of them a time or two it’s basically over. It’s a great mode but still early in development, and features like the business passengers with the artificially-short time limits for delivery to the station are still being adjusted.  Regular passengers have no time limit but the business people have a timer to get credit for their delivery, which is a leftover feature from when this mode earned points to unlock props for free-play mode.  Basically, Tracks is in the earliest days of Early Access and is still sorting through ways to make its content fit together properly.

While there’s still a long way to go to see Tracks develop into the game it will become, it’s already charming beyond all reasonable measure.  Laying down a rail line and setting up a little village with houses, trees and fences is nicely relaxing, and easy to lose more time than you’d expect as you line up the pieces just right.  Whether you make a sensible transportation system running through the apartment environment or a giant tangle of interconnected tracks that may be functionally useless but wonderfully chaotic, the results are always fun to see.  At the moment Tracks is a bit simple, with a lot of design elements still being worked out as the Game aspect comes together, but the Toy part is basically perfect and just needs more props and environments to fill things out.  It’s a fantastic start for a wonderful gaming idea and a great way to keep anyone’s inner child happily occupied building their own little world.