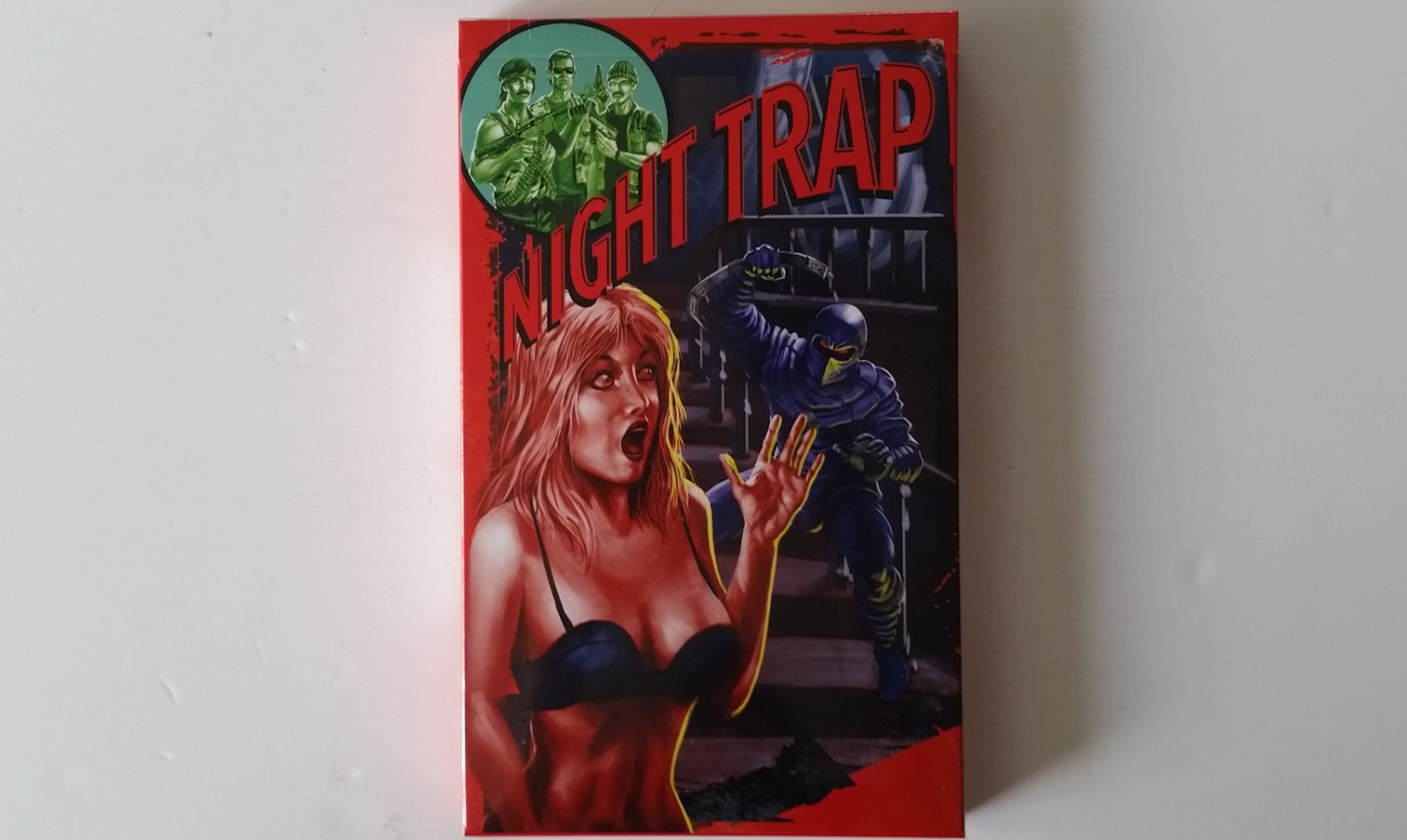 Night Trap is a game that lives on these 25 years since release for a number of reasons. For one, it was one of the very first full motion video (FMV) title that gamers ever got their hands on. The trend, which effectively died out in the early aughts, has since been reborn thanks to independent developers. There’s also the fact that it is an inextricable part of gaming history due to being one of the two titles specifically that brought about the ESRB rating system. Beyond all this, the title is just too campy to hate. It’s likely because of all these factors that Night Trap: 25th Anniversary Edition came into fruition and then paired up with Limited Run Games for a handful of physical editions.

First there was a standard copy of the game available on PS4 with one of three different covers. Then there was a Limited Edition for PC which came in a retro PC-style big box and included a poster, physical disc and Steam key. Perhaps the most sought-after edition was the Night Trap Collector’s Edition on PS4. After all, at this point in time, Limited Run Games have drawn some of their biggest collector fans from the Sony community. The Collector’s Edition was limited to just 3,000 copies worldwide and sold out promptly before the first minute of sales had elapsed. Suffice to say, many die hard Night Trap fans were left frustrated. On the other hand, the PC edition actually stayed in stock long enough for anyone who wasn’t super duper speedy at ordering to pick up. 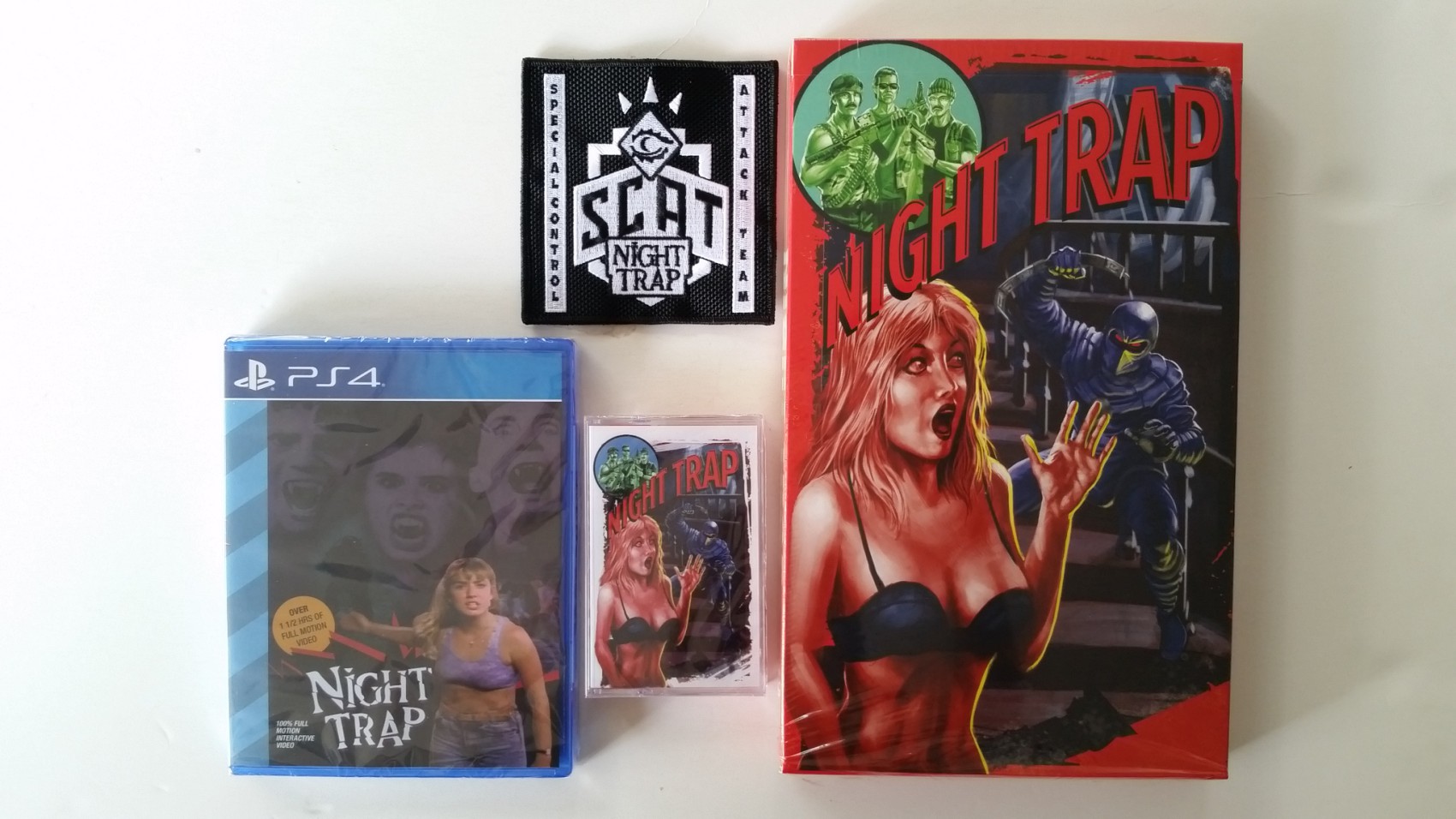 Is the Night Trap Collector’s Edition truly worth it? That depends on your level of affection for the game, of course. The box includes a region free PS4 disc featuring Night Trap: 25th Anniversary Edition. To make up for not having access to all three cover variations on the PS4 case, the cover art is actually reversible. However, if you plan to keep the title sealed then you’ll forever be graced with the Sega CD-styled cover art variation. Since the game itself is available digitally through PS4, it’s safe to assume that many will leave their physical boxes sealed and purchase a downloadable copy through PSN.

No poster is included (as that is specific to the PC edition, much to the dismay of some). Instead, you get both a patch and cassette tape. The patch itself is meant to mimic the Special Control Attack Team logo with its familiar, humorous acronym “SCAT.” Because of this, it might be weird to actually stick the patch on anything, lest people assume you’re proudly declaring your fetishistic love. Ah well, it’s still an amusing perk to hold onto. The cassette tape is just the latest in a swarm of collectible gaming merchandise in the form of tapes. 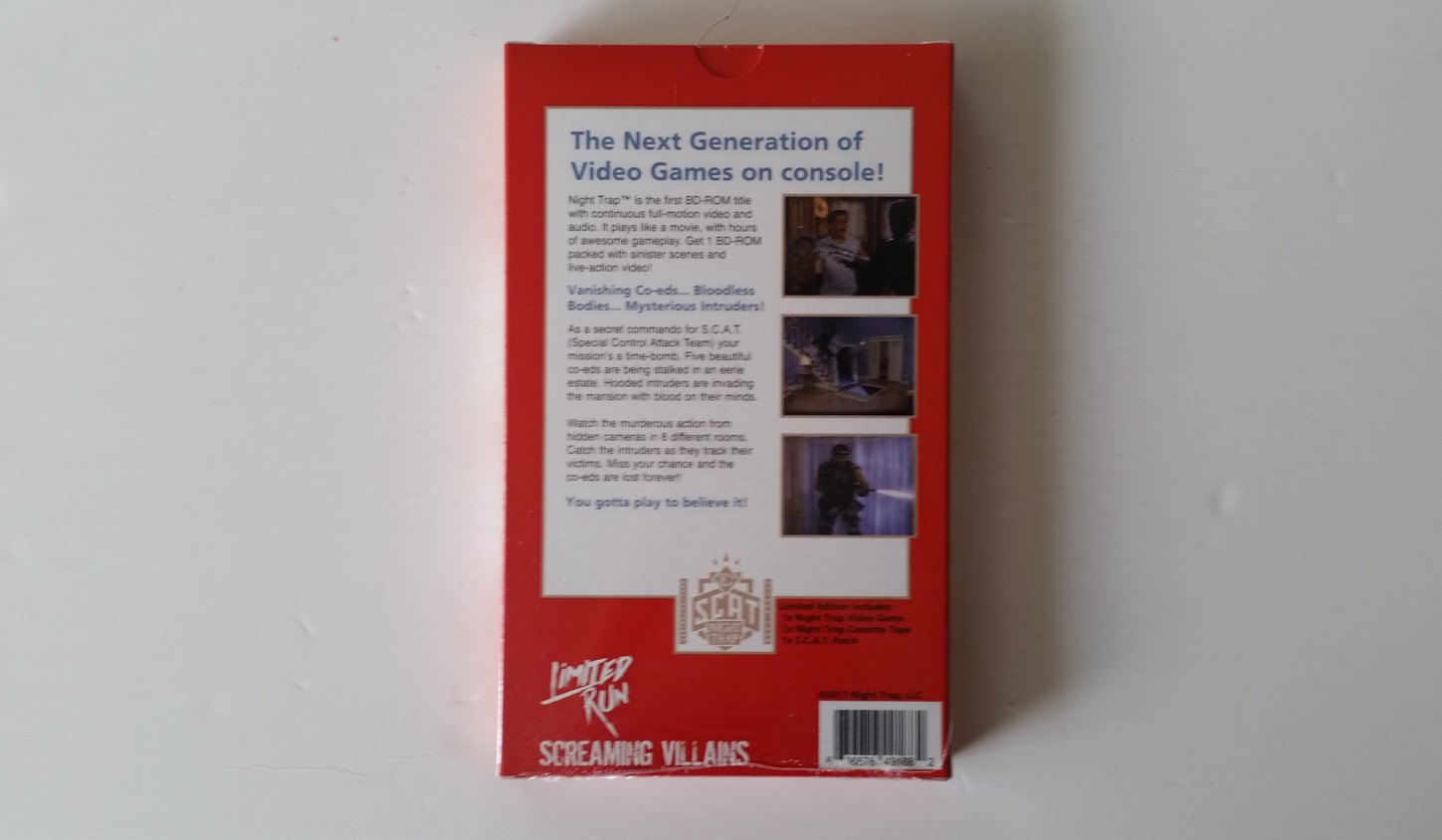 There’s a reason we as a society let tapes die and that’s because they offer poor sound quality and have a penchant for breaking. The only song included on the Night Trap cassette is the iconic theme song. You don’t need the tape for this. Developer Screaming Villains hosts a MP3 copy of the track on their website if you need to blast it on repeat. Finally, there’s the Collector’s Edition box itself. Whereas the PC edition has a kind of blase cover, this version features the lovely painted artwork (as also found on one of the cover variants). The back of the box does its best to hearken back to another time with its goofy text and simplistic design.

All in all, the Night Trap Collector’s Edition is a solid, if slightly expensive, package for what is included within. Like many Limited Run Games releases, it’s now currently being sold for $30-$50 more on sites such as eBay. Fortunately Night Trap: 25th Anniversary Edition is available on PS4 and PC as a digital download. Even if you missed out on having the new copy of Night Trap on your shelf, you can still enjoy trapping Augers on a modern system.