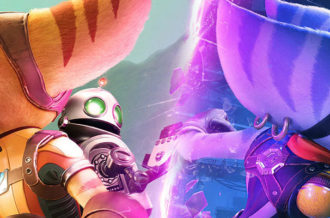 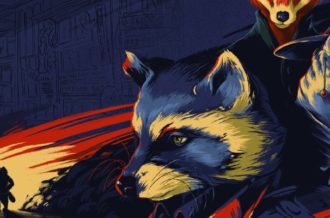 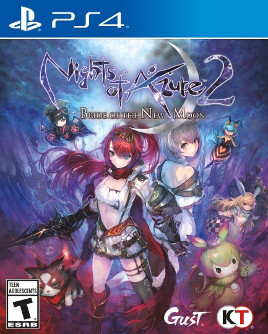 Nights of Azure 2: Bride of the New Moon

A lot of games generate mass interest and excitement long before their release and are able to use that hype to generate more publicity and reach a wider audience. Other games do not have that luxury and fly under most people’s radars and may be discovered by accident. Nights of Azure fits into the latter category. It was advertised as showing a darker side of Gust, who are best known for the Atelier series of RPGs, and is something I likely never would have picked up if I hadn’t been chosen to review it. Despite its imperfections, it ended up becoming a personal favorite from 2016. If Atelier is any indication of Gust’s love for building a franchise, fans of the original were optimistic for a sequel and in August Nights of Azure 2: Bride of the New Moon was released in Japan and has now received a worldwide release.

Taking place sometime after the events of the original, Nights of Azure 2: Bride of the New Moon introduces us to a new half demon female protagonist by the name of Aluche. Aluche has two childhood friends (not half demons) that are established as being close to her almost immediately upon starting up the game. Aluche’s companion Liliana is a priestess of the Curia, or at least she was because she was chosen to be the Bride of Time and sacrificed to the Moon Queen to bind her power. Aluche, an agent of the Curia, was assigned to protect Liliana, lest any harm befall the sacrifice before the required time. Their other friend, Ruenheid, is a power swordswoman, trained to be the Warrior of Light that will save the world. After learning Liliana became the chosen sacrifice, she ended up joining the Lourdes Order, a group that opposes the Curia. The Lourdes Order believes that offering the sacrifice to the Moon Queen won’t seal her power, but instead give her the ability to plunge the world into eternal night, so the fate of the world that depended on a human sacrifice now is complicating by dualing theologies.

Nights of Azure is a yuri game, and while it was handled with some subtlety, the true nature of Arnice and Lilysse’s relationship was about as transparent as Walon Smithers. Nights of Azure 2: Bride of the New Moon lacks said subtlety, at least to an outsider looking in. Between Ruenheid, Liliana and Aluche, there appears to be a sapphic love triangle, though how cognizant any of them are towards the feelings of the other women or even if they’ve come to terms with it themselves is a bit cryptic, but watching how the characters relate to each other and the bizarre circumstances surrounding them is one of the more endearing features of the story. Fan service is another element that has been cranked up with the inclusion of a hotel swimming pool. There are some short cutscenes that take place in the pool where they are wearing swimsuits with varying levels of revealingness, after which they can be worn as normal attire during the game, allowing the player to customize the game to their desired level of fan service. Also of note for fans of digital dress up, there is some cross costume content for those who purchase Blue Reflection and this title under certain conditions, where the protagonist of each game gets an outfit that matches the other. 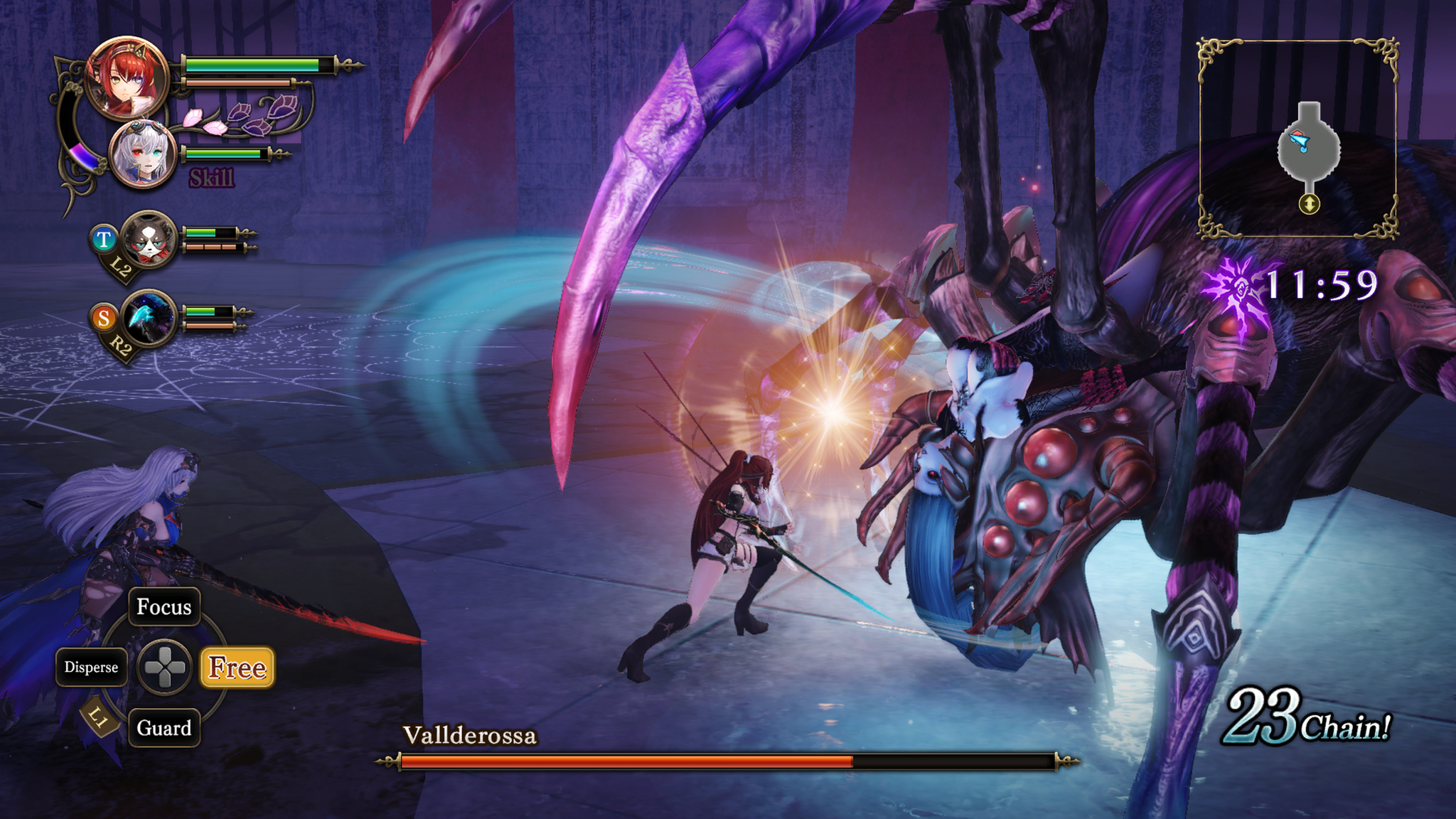 The gameplay of Nights of Azure 2: Bride of the New Moon is similar to its predecessor. Hotel Eterna serves as a base of operations where Aluche can talk to Ruenheid, Liliana, Camilla and other companions she meets on her adventure. Like Arnice before her, Aluche collects blue blood from the fiends that she slays in battle, but instead of going to the rooftop altar to level up she goes to the Maintenance Room to undergo a procedure to convert the blue blood to powering herself, as the nature of her half demon status is slightly different than Arnice. When Aluche levels she gains skill points she can spend to increase attributes like adding extra health, increasing the chance of inflicting a harmful status on enemies or increasing the time limit she can hunt. Items can be bought to be equipped or fused with other items to strengthen them, though there has been a minimal need to do this during the review playthrough.

To advance the story and complete side missions, Aluche leaves the Hotel Eterna and ventures out into a different area marked on the map, and this is where a lot of major changes to the gameplay mechanics become apparent in spite of being very similar at their core. Unlike the original, these locations are separate entities from each other, so if the player was to travel to Ruined City Eurulm they would not be able to travel from there to the Hidden Mine or Saint’s Forest. There are quick travel points within the maps, but each one will only take the player to a different area of that map. Time limits are a thing, and to put it more accurately they are two things. Aluche has a time limit she can be out on a hunt based on the nature of her half demon heart, and when the time limit reaches zero she teleports back to the Hotel Eterna. What’s annoying about this is the player could start with fifteen minutes on the clock, travel back to the hotel after being out for three minutes, meaning twelve minutes left of hunt time, but all the player can do is any events in the hotel or just go to bed to advance the next day. This isn’t ideal if there are several side quests that are in different map locations, especially if they can be taken out quickly. To make matters worse, the moon becomes smaller with each passing day and the result is a game over if it ever becomes a new moon. This can make planning out quests that require different Lilly companions in different areas somewhat nightmarish for completionists. A way to reverse the shrinking of the moon is to defeat a powerful boss monster, which typically advances to the next chapter. This unfortunately eliminates the ability to freely run around areas exploring and completing side quests at one’s leisure. 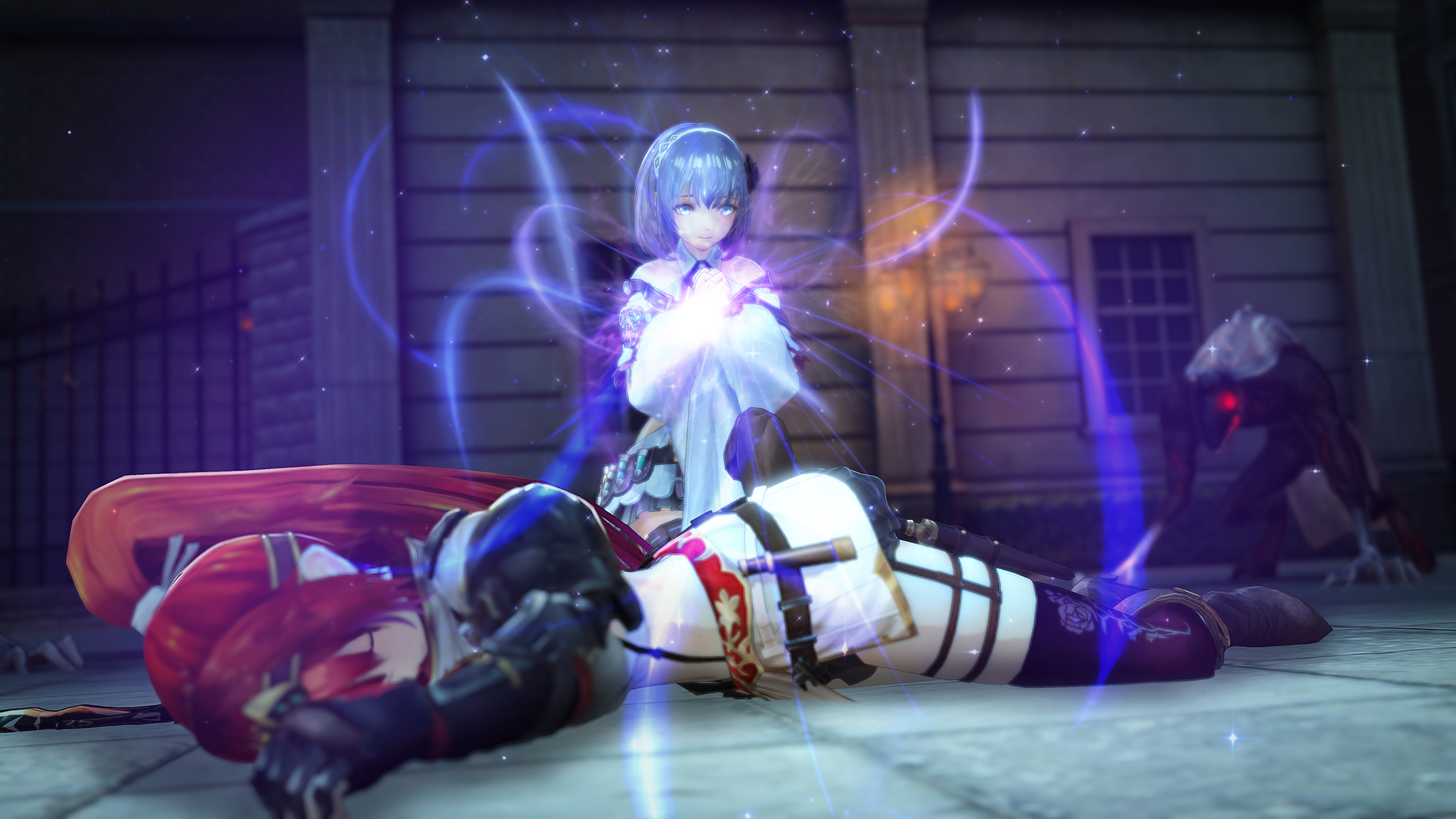 The change in gameplay mechanics is basically a wash in this writer’s opinion. Some of the elements that were enjoyable in the original are removed, but some of the new additions are pretty cool. Instead of traveling out with four servan escorts, which is are basically tamed fiends that fight alongside the player, the AI party consists of one Lily (either Liliana, Camilla, Ruenheid or one of the others that joins Aluche later on) and two servans. The collection of servans seems smaller this time around, but they seem more significant in what they bring to the party. Some servans are basic attack and defense support. Some of them like Aile can transform into a greatsword that Aluche can wield whereas others like Farfalla are necessary for Aluche to reach very high locations. Instead of using the blue blood to transform weapon T-1000 style, Aluche changes her equipped weapon by bringing a specific servan along with her on a hunt. This limits the weapon variety she has available, and opting to take an extra weapon can potentially prevent her from taking a servan she needs to access a blocked treasure. Each servan follows an AI pattern but the player can trigger actions from them with the trigger buttons.

The Lilies are given direction through the D-pad, which basically just tell them what AI pattern to follow. The choice of Lily does matter since they have different fighting styles and strengths and weaknesses. Ruenheid fights with a greatsword versus Camilla’s penchant for guns. Each Lily has a special ability that can add a temporary buff to Aluche or inflict damage on enemies. Aluche has her own special charge attack which varies depending on which Lily is with her, which could attack many enemies or do significant damage on a single one. Revenge attacks happen when Aluche attacks a fiend that just attacked her Lily, and a double attack happens when they attack the same fiend at once. If they get enough double attacks in a certain time frame they can do a powerful joint attack by mashing the circle button. Aside from these changes, combat is essentially just what it was in the first title. Aluche runs, jumps and slashes her way to victory, battling groups of fiends as she traverses an area and faces off against a powerful boss monster. Despite all these considerations in the previous paragraphs, combat really boils down to fast paced hack and slash action and pulling off all the different attacks with Aluche and her companions is more complicated to explain than to execute. 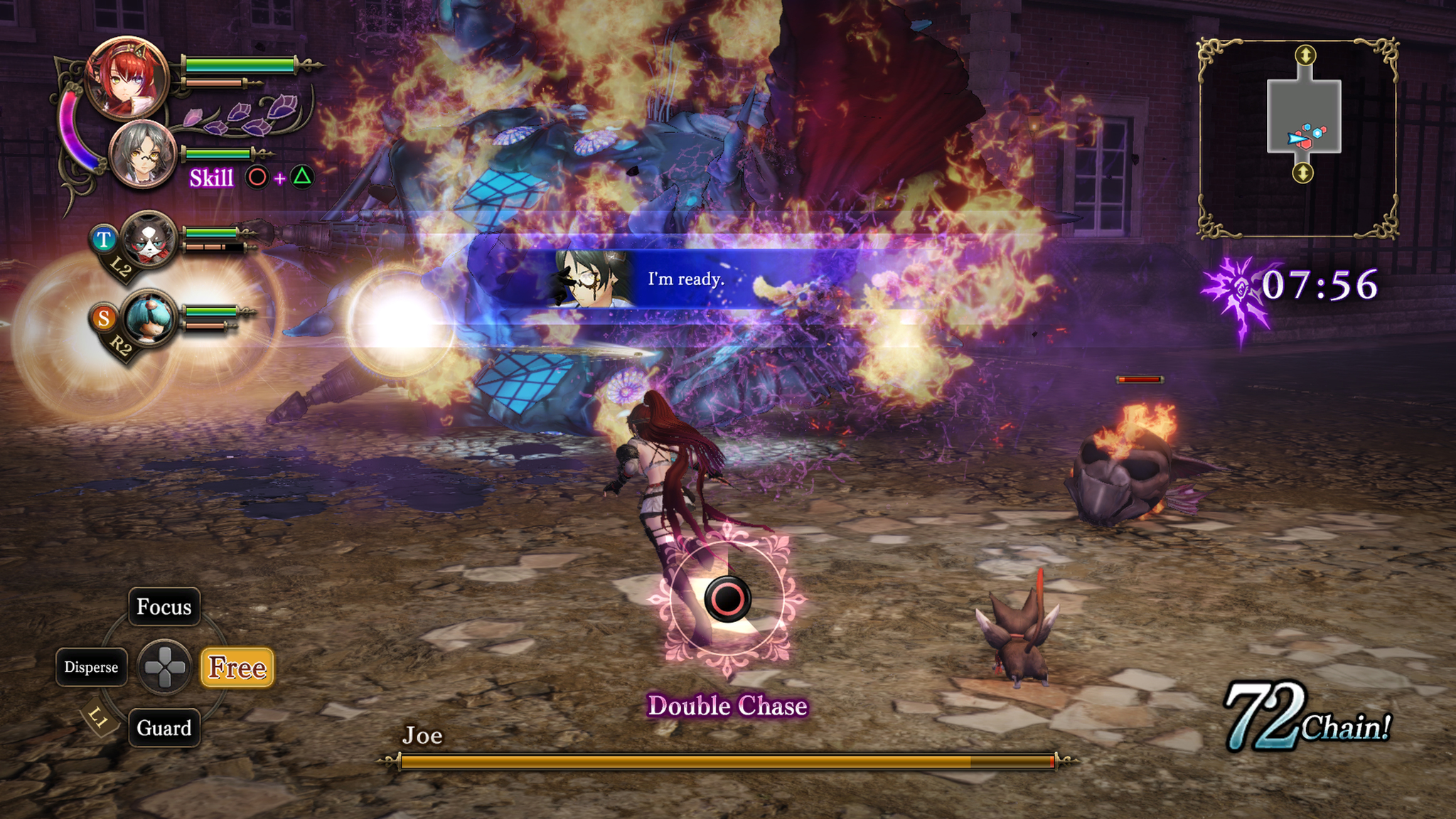 A new feature, or more expanded feature, is building up closeness between Aluche and the Lilies. The affinity meter increases by bringing a character on a hunt with Aluche, and can be increased further by pulling off double attacks and completing character specific quests. The dual time limits that are always at play can make completing all the requested missions with each companion tricky, but spending a few seconds reviewing all available quests allows completionists to maximize each hunt. Completing the Lily quests can lead to bonuses being unlocked for the Lily along with some awkward dialog where the player will wish they could just blurt out what the on screen character is trying to say.

The graphics look very similar to the first game, and enemies and character designs do not show any drastic graphical improvement, though there is some improvement. The soundtrack is excellent, though there may be a personal preference for the music of the original game. The controls are spot on so no complaints in that department. Overall the audio, visual and control trifecta is quite solid and there is no reason to complain about any of it. Sound direction and character design of the first versus the second game is really a matter of personal preference. 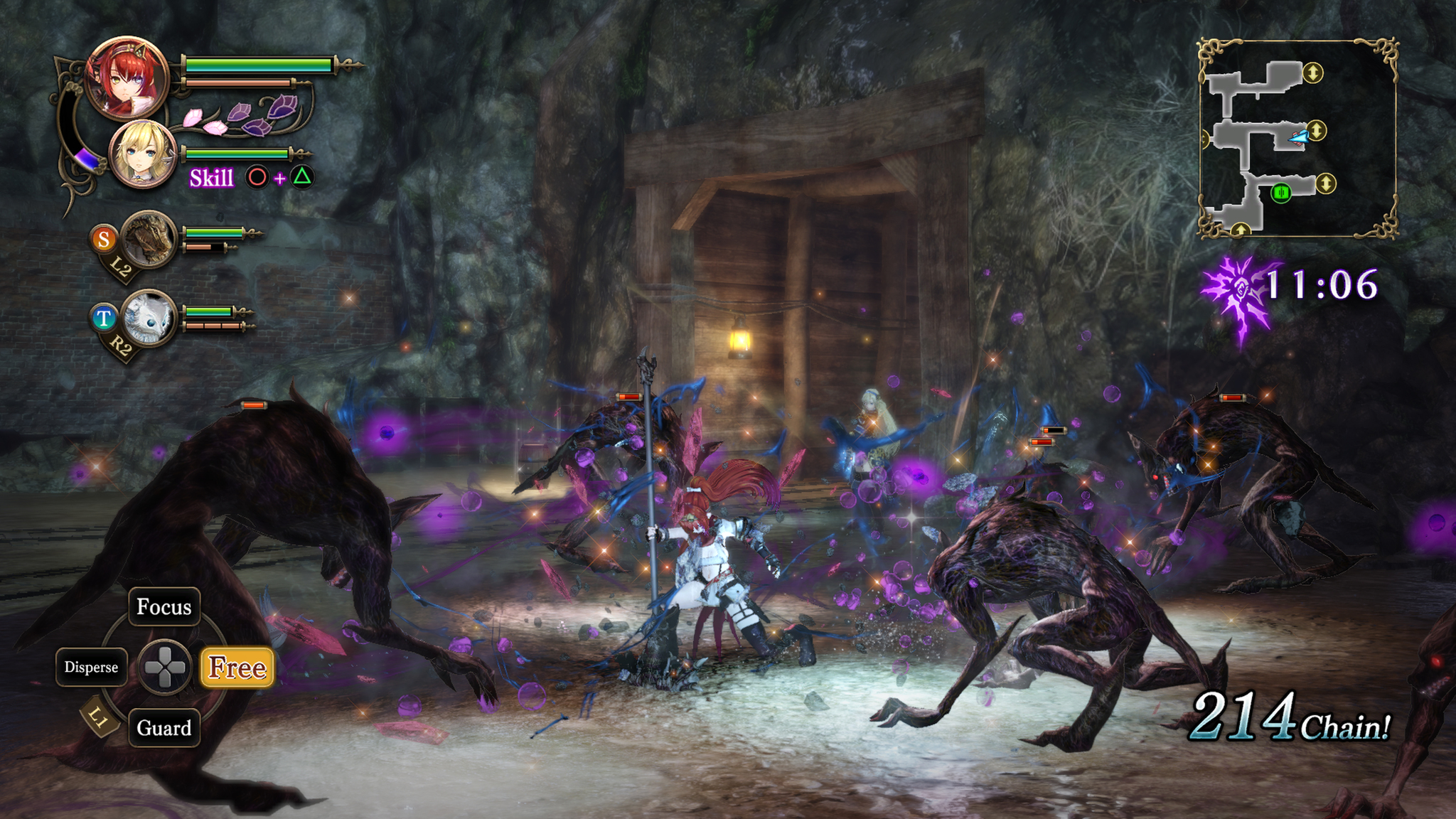 Nights of Azure was a surprise gem of 2016, giving Nights of Azure 2: Bride of the New Moon high expectations to live up to. Fans of the original have been eagerly-awaiting the sequel and thankfully it lives up to the expectations. It’s a new story with new characters and game mechanics, but a lot of the elements that made fans of the original are present here. As far as stating one is objectively better than the other, there’s some technical improvements in the sequel, but it’s probably going to be split down the middle between fans over which Azure title is better and that would just be based on subjective criteria. It’s extremely probable that those who enjoyed the first Nights of Azure will like the sequel just as much. For the uninitiated, Nights of Azure 2: Bride of the New Moon is an enjoyable action RPG, and while it has a strong yuri element to it, the gameplay and other aspects of the story are strong enough that it should be played even by people outside of that niche interest group.