Homefront: The Revolution never stood a chance. It started off as a true sequel to the heavily-hyped, but underwhelming Homefront, leading many to inquire about the particular flavor of Kool-Aid then owner THQ was ingesting. Three developers and a full revamp from linear experience to open world environment later, the game finally hit stores, completed by Dambuster Studios, which was made up of ex-Crytek employees who were working on it when Crytek was taking the reins. It was a mess. As such, the May 2016 release wasn’t so much that of a game, but instead took the form of sloppy coils from a dog that has a guilty look upon its face. The reviews process was almost perfunctory and the potential audience basically checked these to have their suppositions about the final product confirmed. Shot through with technical glitches and bugs, even those that wanted to enjoy the experience were prevented. So often, when something this seemingly far gone gets released, the developer will issue a couple of patches to look like they tried, shrug their shoulders and move on. If any heads roll, they are typically owned by people that had no control over the situation. Dambusters did not take this tack. Instead, they spent the past year and change patching, tweaking and perfecting the title. For a game with a 48% on Metacritic to see this amount of love is almost unprecedented. It was actually kind of worth it.

It seems wise to address the politics behind the plot up front, as it is actually important considering the current climate. The title centers around a North Korean occupation of the United States, a laughable proposition in general. The thing is that, since The Revolution’s release, North Korea went from a situation that sucked but was under control, to a legitimate concern affecting the world’s interactions in profound ways. This is why it is of tantamount importance to note that, despite the concept, The Revolution manages to keep itself entirely apolitical. Unlike the initial title, where a confluence of events brought about a situation were North Korea only needed to make a couple of right moves to become a world power, The Revolution takes place in a completely different timeline. Here, North Korea became the leading technical powerhouse starting in the 70’s, and the US was their best customer. Being the sole supplier of all technology, from weapons, vehicles, computers, and whatnot, the North Koreans only need to press a button to turn that stuff off, and then walk on in. Obviously, this plot conceit has no bearing on any real world events. Basically, anyone that wants to play a silly shooter to escape reality for a little while isn’t going to need to worry about diving into this one. 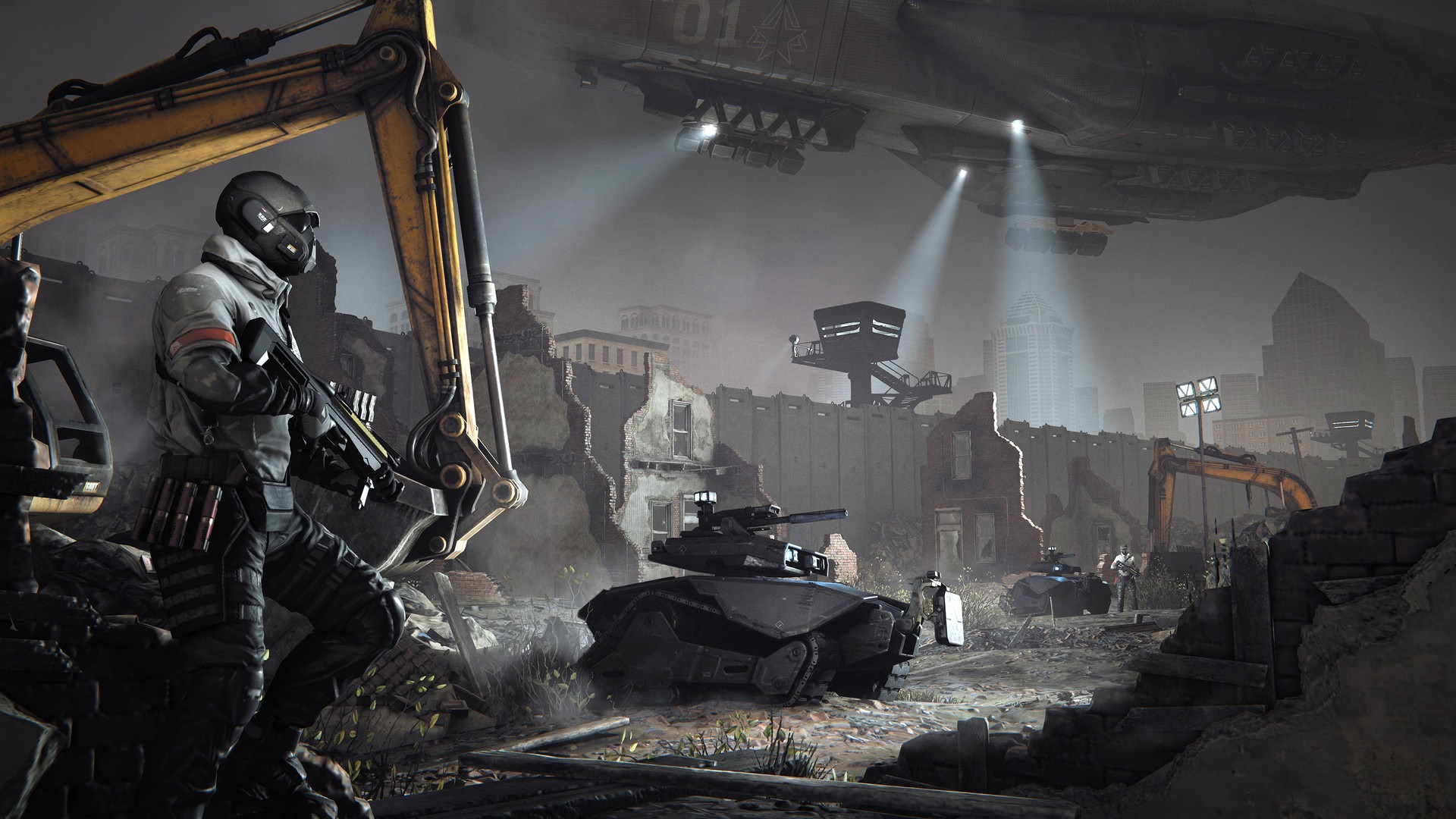 Players take the role of Brady, a silent vessel for the player to join the resistance against the North Korean occupation in Philadelphia. A ruined dystopia, the scrappy group of fighters have their own John Connor in the form of Benjamin Walker. Unfortunately, Walker is quickly captured and it becomes the resistance’s duty to both rescue him while freeing as much of the city as possible.

Some have called out the plotting for being overly goofy, but there is something interesting to the universe that the player inhabits. The occupation force is obviously going to be true evil, a fact established quickly during an interrogation scene at the very beginning of the game, and then reinforced throughout the title while exploring the residential areas of the city. However, the resistance isn’t exactly holding the moral high ground. After slipping the knot of arresting forces when Walker is captured, the player is introduced to his new teammates. These people beat Brady unconscious, drag him to meet another teammate, and then get within a hair’s breadth of slicing off his nipples. I think this was meant to be a bit of a comedy of errors type scene with an extremely dark undertone, but holy crap. Just…just holy crap. Still the shades of grey adds to the ambiance, and despite the brutality, demonstrates that these are people that are holding onto the edge by virtue of a pinky. 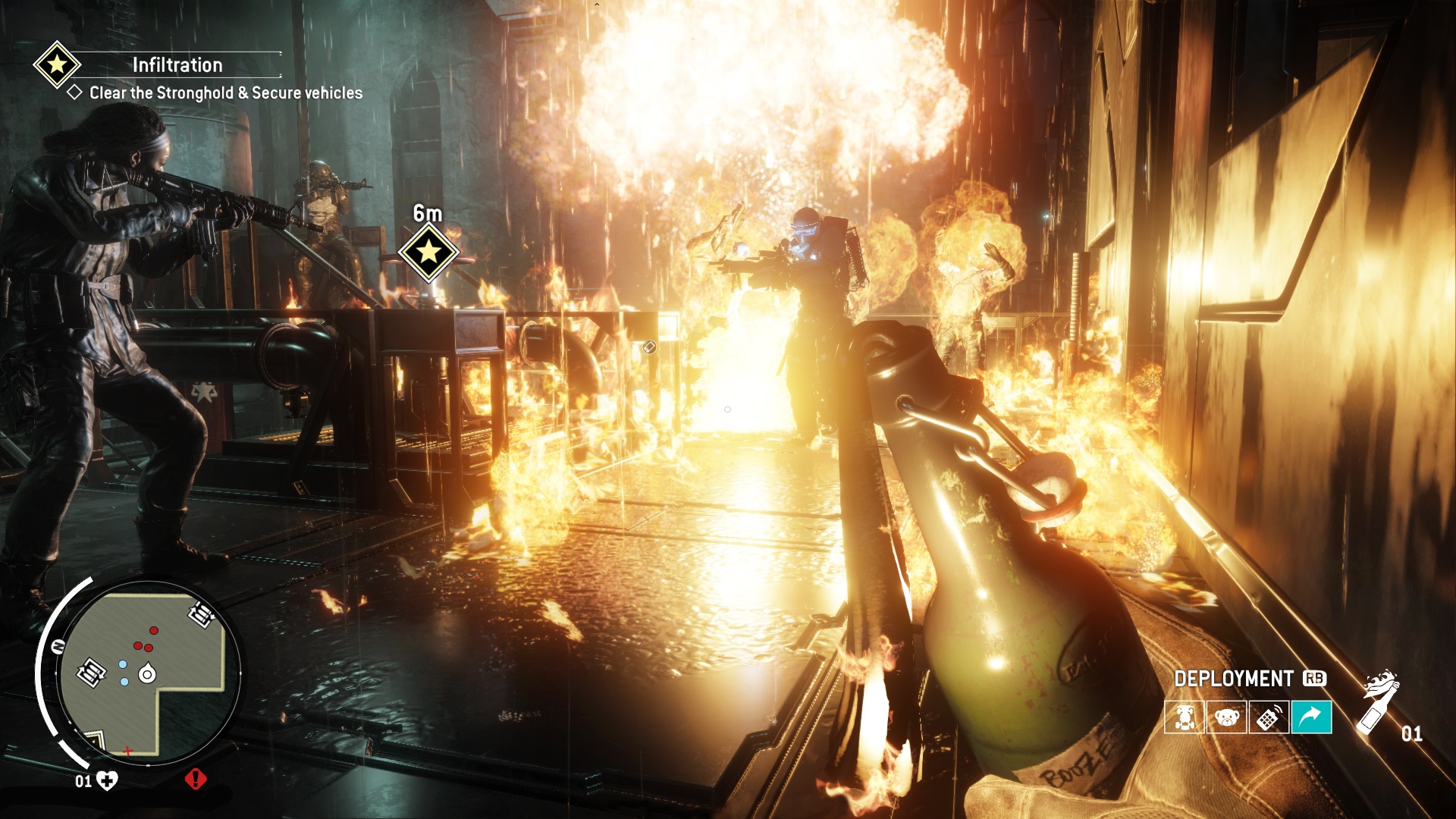 This tonal theme works in tandem with the graphical work the Dambuster has pulled out of the CryEngine. Looking at the game, it’s obvious that what is powering the look. As such, despite some spotty character models (especially a newscaster during the very beginning), The Revolution has some technical chops under the hood. What really sells the appearance comes in the form of the lighting. Typically, this time of environment would be bathed in muck and shadow. Dambusters turns it the other direction, with blindingly bright lights, highlighting the war torn city’s crumbling buildings and roads. Especially when juxtaposed with the nighttime periods, this decision actually feels much more oppressive that the average dystopian environments. The brightness of it all makes it feel that there is no good place to hide; the dark crevices aren’t there to shake off pursuers.

This is all without any noticeable technical glitches. Running the game on the PlayStation 4, I found that the framerate was smooth, with no drops, and the textures loaded in properly. The AI also acts more believably. At least, they aren’t able to see through walls anymore, and tend to be responsive to noise and bullets flying around them. It is obvious that work has been done to fix the myriad documented problems found in the initial release, and it shows. Because of this, different strategies can be utilized to make progress, such as drawing out an entrenched armored vehicle and leading it on a wild goose chase, or just peppering it with explosives to remove it from the equation. There are all sorts of ways to tackle issues, and it actually works now.

The only thing really hampering the experience is in the mission design. Much of the game is focused on capturing buildings from the North Koreans, and that’s pretty fun to do for awhile. Eventually, it begins to feel horribly repetitive. There’s only so many exploded building husks that can be taken before a feeling of tedium sets in. The only way to break it is by using the different methods of approach previously mentioned. The thing is, one person might be great at run and gun, while another excels at stealth. They will naturally gravitate to the style of play that suits them instead of consciously trying to switch things up. More done to differentiate these moments, or even better, excise them in favor of differing goals, would have gone a long way towards giving this title some staying power. 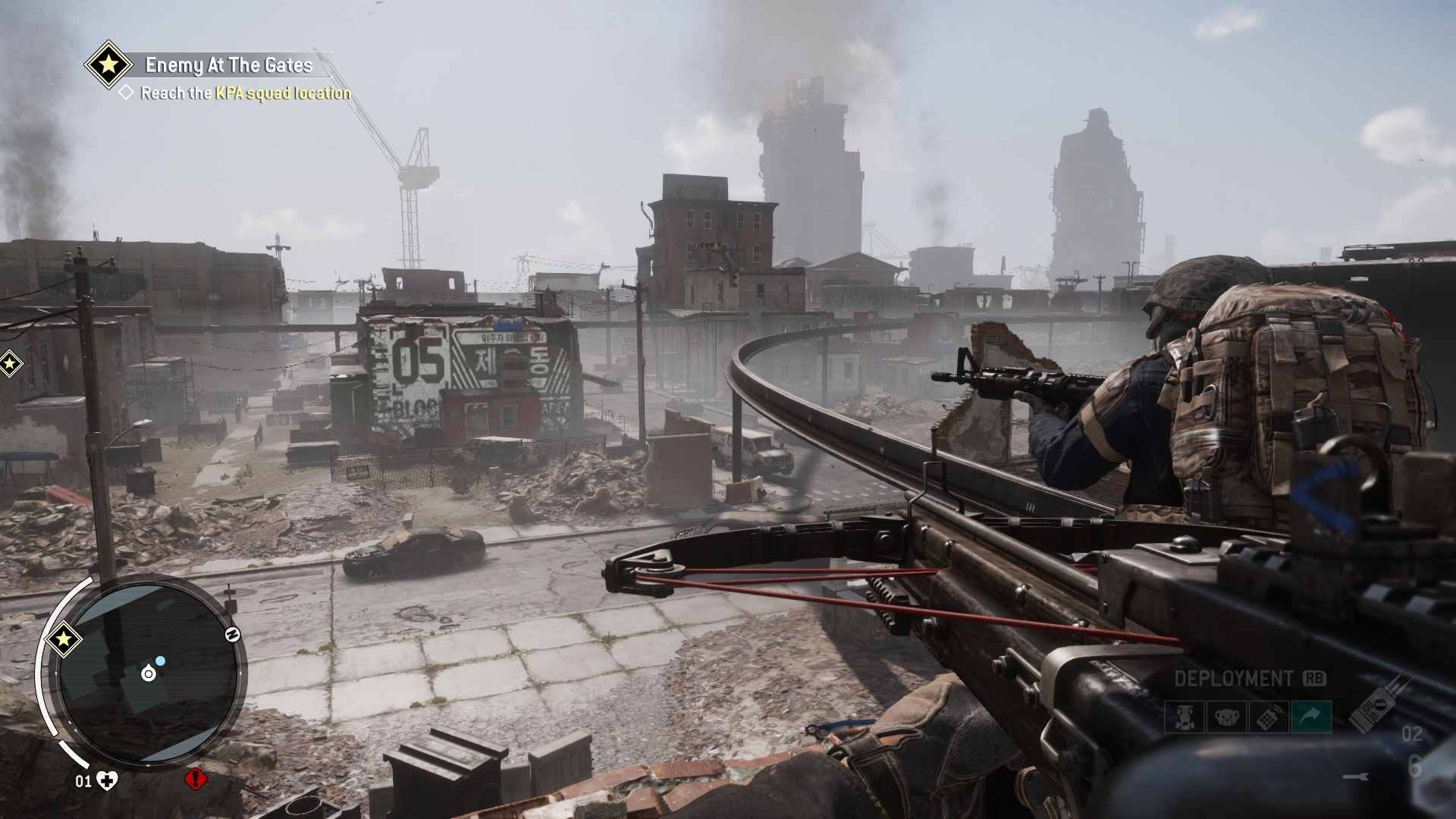 I was given a copy of Homefront: The Revolution by the boss when the title launched with the understanding that I would do additional coverage of it. Then I read our review and “forgot” about it (the boss never asked and I sure as hell wasn’t going to bring it up). Still, a promise is a promise and I decided to pop this one in a couple of weeks ago so I could make fun of it for this column. That’s when I discovered that it didn’t suck. With a little research, I discovered that this was because the developer cared about this one and really wanted to make good even if the work wouldn’t be profitable. By the time it was fixed up properly, the sales window has long passed. This earnestness shows through. Shooter fans looking for a lengthy, silly, dark and interesting title for cheap really should consider giving Homefront: The Revolution a chance now. It’s got some flaws, but it’s also got a heart.