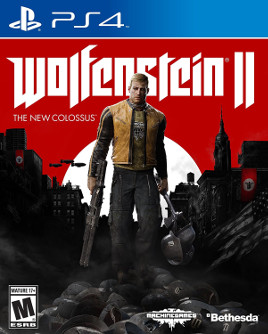 Video games as an effective means of eliciting an emotional response shouldn’t be newsworthy to anyone at this point. For decades now, games have used writing, music and visual effects to create scenarios that make the player feel something, this has just become more common as the gaming industry has made advancements in technology and in maturity. What’s fairly uncommon is when a game can trigger an intense emotional reaction, particularly feelings of empowerment and powerlessness. The opening sequence of Wolfenstein II: The New Colossus effectively plays with this dynamic in bringing one of the toughest opening sequences to sit through. During the flashback taken place during BJ “Terror Billy” Blazkowicz’s childhood the player sits back and helplessly watches the cruelty his father unleashes, creating a genuine desire to commit patricide on him which sadly the game does not allow the player to do, believe me I tried. This feeling of powerlessness sets up the next sequence of events which takes place in the present in 1961, when we find our hero badly wounded, unable to keep his health above fifty percent as he has to fight his way through an area crawling with heavily armed able bodied Nazi soldiers as he is confined to a wheelchair.

The sequence of flashbacks that occur during Blazkowicz’s rescue from the events at the end of Wolfenstein: The New Order is blatant emotional manipulation that relies on getting a quick angry response from the player by using the oldest dirty tricks in the book. For better or worse the scene succeeds at what it sets out to do, but those who can stomach it end up being rewarded with an enjoyable first person shooter. As sickening as the flashbacks might be, we get a sense that the protagonist never wanted to feel how he did during those events and given that he is currently in a physical state where he has greatly diminished capabilities he will do what he needs to do in order to overcome the obstacles in front of him, which in this case are a bunch of enemy Nazis who are hunting for him in his team’s U-boat. The Nazis are really an inconsiderate bunch, they could have given Blazkowicz more of a break between events and not started this game immediately after its predecessor. 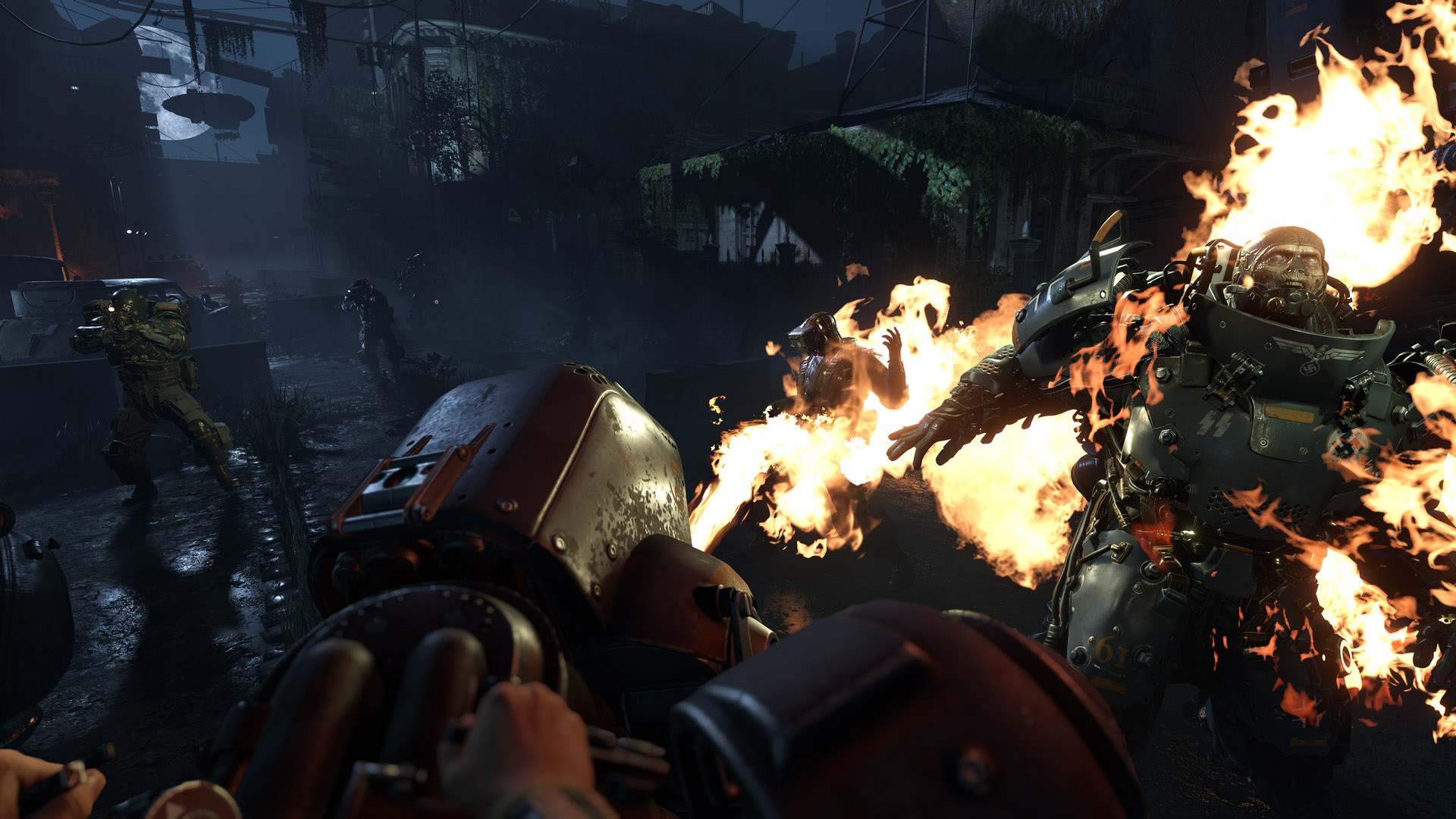 One has to hand it to Blazkowicz, charging headfirst into battle against able bodied soldiers while confined to a wheelchair takes some serious stones. Since his attacking the Nazis while wheelchair bound only establishes him as an uber badass, imagine the destructive force he has at his disposal once he gets a set of power armor and regains mobility of his legs. Being able to move freely opens up some dual-wielding options among the various guns he can acquire, and as fun as having an arsenal of firearms at his disposal there is something satisfying about sneaking up on unsuspecting soldiers and taking them out with a hatchet. Between guns, grenades, melee kills and environmental destruction Wolfenstein II: The New Colossus delivers the type of action packed explosive combat we have come to expect from this first person shooter franchise.

A new addition to combat occurs later on in the game when upgrade kits become available. A good way to approach the weapon upgrades is to experiment with the different weapon types early on in the game and see which guns end up being the go to weapons. When the kits do become available use them to power up the weapons of choice, which can end up making a significant difference in how powerful the player is and what the overall gaming experience is like.

Part of the enjoyment of Wolfenstein II: The New Colossus is watching the story unfold and getting the know the various characters in the story. General Engel is presented as the primary antagonist, and she is a sadistic and cruel woman. A good character reference for her is Negan if you got rid of his charisma and good personality traits, she is about as likable as Blazkowicz’s old man in his flashback cameo. With a mom like her it is no wonder Sigrun Engel defects and joins up with Blazkowicz and his crew. Blazkowicz’s allies are an eclectic group, and as stated by one of his compatriots everyone is welcome, except Nazis. Eva’s Hammer serves as a central hub between missions, and it is worth taking some time to explore this and talk to the various companions as the story progresses. 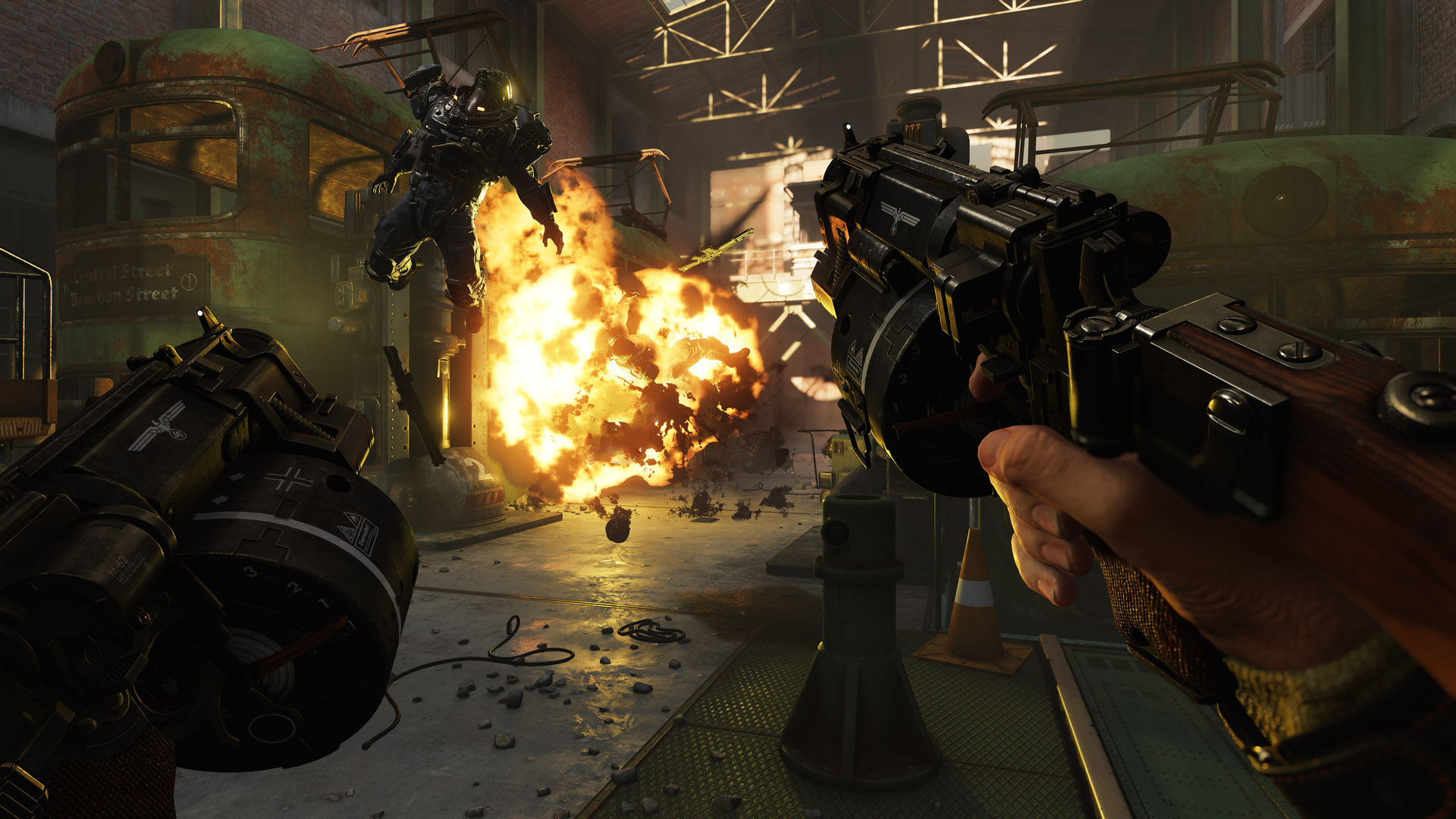 Casualties are an unfortunate element of war, and prior to the events of Wolfenstein II: The New Colossus Wyatt and Fergus are in a bit of a pickle. During the flashback sequence Blazkowicz relives this moment and has to choose which one of them gets to live. Who is chosen to be sacrificed doesn’t effect the core gameplay drastically but it does impact the group dynamic and alters cutscenes and conversations. It does provide a reason to play through Wolfenstein II: The New Colossus more than once, though most players will likely end up sparing whichever character they enjoyed more in the previous entry. Besides the social impact, each character offers a unique gun. Fergus unlocks the Laserkraftwerk, and Wyatt offers the Dieselkraftwerk. Kraftwerk was not historically popular in 1961, but this is alternate history.

Fans of Wolfenstein will not be disappointed by the presentation of the world in Wolfenstein II: The New Colossus. The alternate history of the Nazis being victorious in World War II is an interesting albeit horrifying concept. This isn’t the first time a game has explored the concept of a foreign invasion on US soil but for the alternative history “what if” aspect puts an interesting spin on the idea, and while what the world would be like if the Nazis won World War II has been speculated by many, Wolfenstein’s interpretation is one of the more unique pieces of fiction. The weaponry and technology of Wolfenstein games have a tradition of being a blend of futuristic sci fi concepts mixed with a 1940s aesthetic, and there are many examples of this style to be found. From Nazi airships to high tech battle armor to robotic abominations, fans of this fictitious evil kraft werk will enjoy taking in the creative artistic direction with this title. The levels are noticeably larger than they were in the previous entry, and some even have hidden paths and alternate routes. These can be used to a player’s advantage in over coming some difficult spots or seeking out a safer alternative. Booby traps are commonplace, and they work just as well against the player as they do the enemy so it is important to deactivate them before pressing forward after they’ve been used to watch an enemy walk right into their death.

The overall presentation of Wolfenstein II: The New Colossus is very well done. The music selection seems a little on in some parts, like a certain piece that sounds like palm muted guitar riffs from Pink Floyd’s The Wall, which isn’t bad at all, but caught me off guard when it started. The voice acting is also quite good, and even with having to rely on the subtitles to understand the German from Irene Engel, her delivery makes it clear she isn’t a nice person. The responses from Sigrun are convincing in the resentment and shame have been built gradually over a period of prolonged exposure to her mother’s personality. In general the dialog among characters is high quality and doesn’t sound phoned over or ridiculously hammed up. The graphics show off the creative design of this world nicely, not the best for this console generation but nothing to complain about. Controls are smooth and responsive, even during the portions where Blazkowicz has limited mobility. 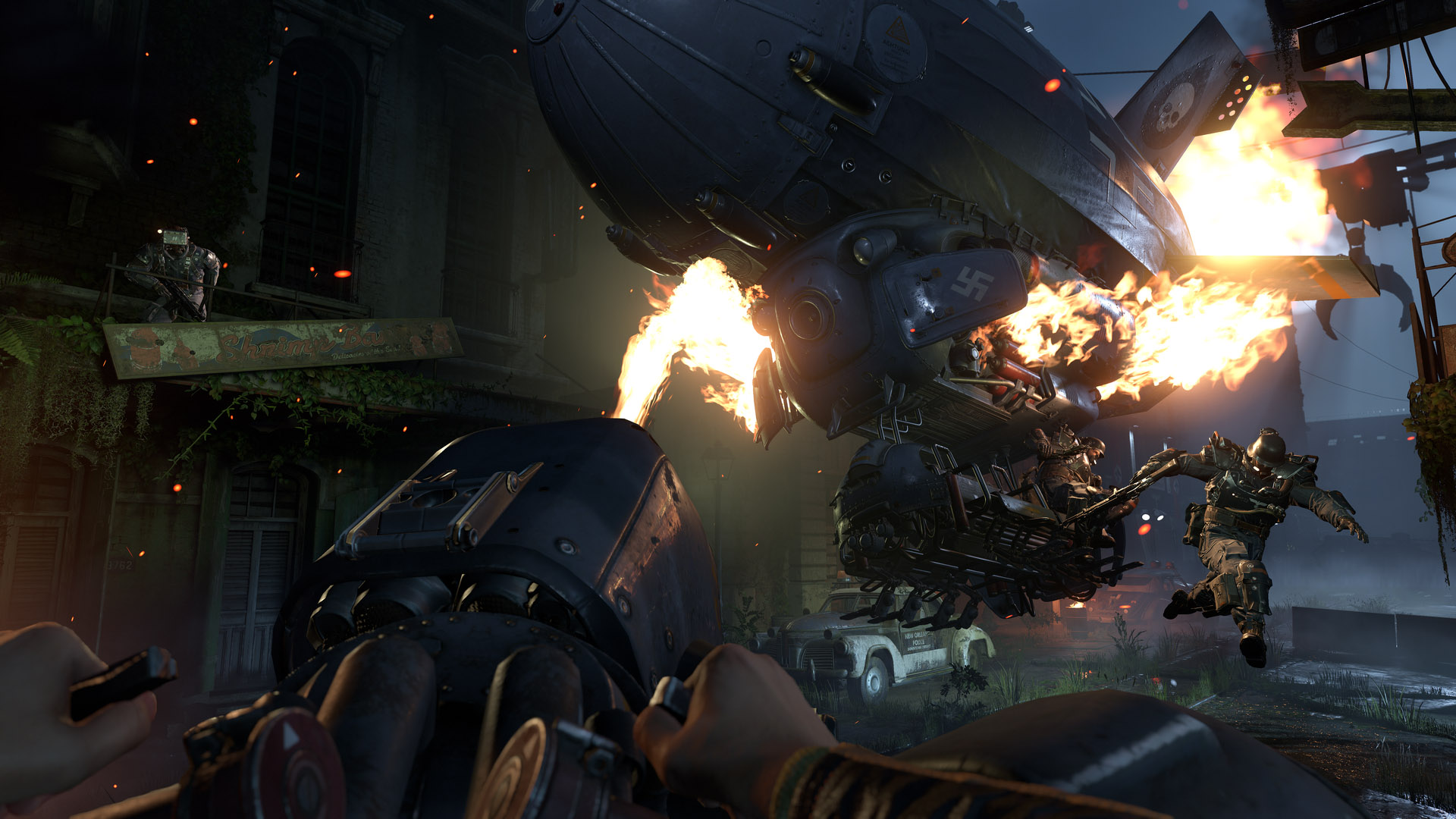 Wolfenstein II: The New Colossus delivers an enjoyable action packed first person shooter experience. The alternate take on history makes for an interesting story populated by characters who are easy to care about. The characters that the player is supposed to hate are quite easy to despise since the game doesn’t hold back about cranking up their despicable level. Some sequences are hard to sit through since they don’t shy away from racism, antisemitism, animal cruelty, domestic violence and just sadistic behavior in general, but this features Nazis, so expecting sunshine and rainbows would be a naive viewpoint. Overall Wolfenstein II: The New Colossus delivers a memorable experience that doesn’t pull any punches to get an emotional response but still maintains the over the top action movie camp factor. Most importantly, it delivers fast paced shooting action and explosive carnage which is what people typically want from a first person shooter.