With only a few months left in the year and the dreaded day of October 27 having just passed, video games are in the final stretch of an epic year in gaming.  Three big titles coming out in succession made a whopper of a package. If only there were some sort of orange-colored box, they could all come in (sigh…). With Super Mario Odyssey, Wolfenstein II: The New Colossus and Assassin’s Creed: Origins all having come out on the same day, it was a difficult day for anyone who enjoys video games. What to play? A date like October 27 usually makes the rounds every few years, with multiple big titles all lined up together. Unfortunately, that can mean one of those titles might not shine as much as the others, even if it’s a great game. For the three mentioned above, that title is looking like Assassin’s Creed: Origins.

Before venturing any further into the beautiful oasis blended with sweeping sand dunes backed by the bustling culture that is Egypt, let’s talk open-world games. This is an open-world RPG, which means there will be lots of bugs. Knowing this, being a modern video game enthusiast, means understanding games ship with bugs. It can’t be helped: a video game development cycle is cruelly unrelenting, just read anything from Jason Sheer to understand this. Yes, Assassin’s Creed Origins has bugs, but it’s also a massive game and if it works 99 percent of the time, then it gets a pass. 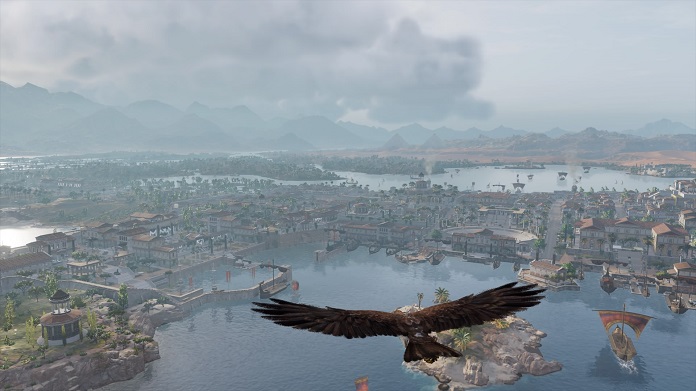 The world of Assassin’s Creed Origins is pushing boundaries, not in what it’s doing, but in sheer volume of what’s available. This is coming from someone who thought Horizon: Zero Dawn or Breath of the Wild (which is an illusion in a sense) was big. No, it’s not the first game to introduce massive places, but Origins is best at representing a geological area for the time in as accurate a way as possible, even having hired on an Egyptologist. The map can be gleamed over and it makes sense; landmarks are recognizable and a sense of place is established. The detail put into making sure Origins was as close a representation of the times has been doubled down over other games in the Assassin’s Creed series. It pays off in a memorable sandbox that holds many secrets while looking fabulous the whole way through (as always, I don’t recommend fast travel).

Having such an established sense of place helps back every other area of Origins. It means not losing focus and staying fully immersed in the experiences happening in game. Origins could be played through focusing coldly on the story, but that would mean missing out on what makes some video games such a joy, playing a game for the game of it. What about Super Mario Odyssey, though? While it proves to be about as video game-y as they come, on the flip side is another game that captures a player’s attention all the same. With RPGs going through leaps and bounds to get where they are today, a certain type of game has come to be expected. If it’s a big open-world RPG, then it probably means plenty of traversal, interactions with the environment and general chaos that comes with letting a player run wild. Breath of the Wild is an excellent example of this, but let’s use an Origins example instead. 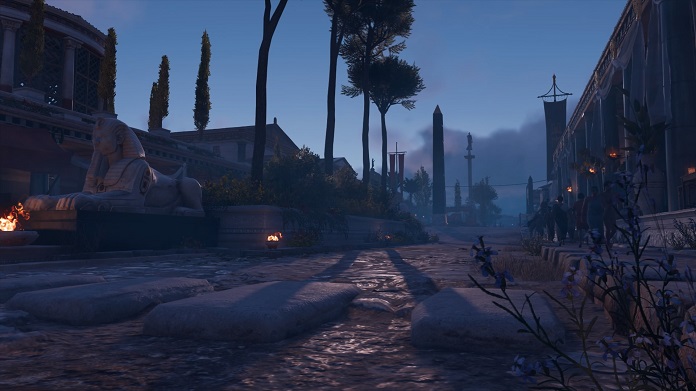 Bayek was on one of the many quests that are scattered about Origins, this time involving finding someone who was being transported across Roman encampments. Following the target along the path, the Charioteer lead to me to a bustling city area (night helped ease traffic. As I made my move, Bayek dispatched the driver with ease, causing the chariot to crash into a large sconce, setting the chariot on fire and spreading it quickly enough to ignite Bayek and the man he was saving. Lesson: doing anything in Origins will probably lead to more chaos than intended in the best of ways. Like, the time I crashed a boat on shore, the mast snapping, coming down over a crocodile’s head, killing it and netting me some skin.

Origins is making one thing clear when traversing this breathtaking playscape, it’s pointing to the world before the player, saying “go wild.” As Breath of the Wild does, it wants to see what the player will do and not punish them for it. Sure, Bayek might meet a fate that isn’t the most ideal, but he’ll come back unscathed ready to tackle the problem all over again. The feature to bring the HUD down to a “minimal” option is another big proprietor of this feeling. It completely removes anything that might get in the way of taking it all in, only showing the most minimal of icons, namely whatever quest is highlighted. Of course, if wanting to see what rewards are being received, which direction to go and anything thing else that might be the least bit helpful, turning the setting to low isn’t the worst, even resembling The Witcher 3. 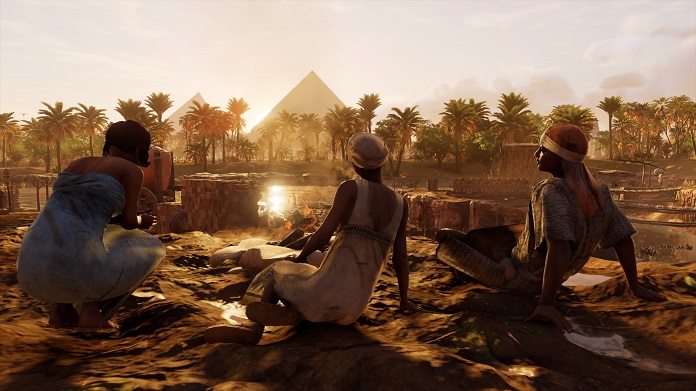 All of this isn’t new though, is it? It’s been said over and over that every time a new AAA RPG comes out, the industry along with fans will go a bit crazy over it. If only there were some sort of term for it; for now let’s call it a sandbox effect. The sandbox effect is something that has been steadily happening to every open-world RPG over the years. As systems become more powerful, game enthusiast seeks a higher standard and the people making these games seek this standard too, especially for AAA games.  The sandbox effect has caused something glorious, the effect of games coming out that the gaming audience adores. Ask anyone who appreciates RPGs and they will each have different favorites. Mine is The Witcher 3, although Origins is quickly gaining ground.

A year off is exactly what the Assassin’s Creed series needed, with Ubisoft honing everything that makes an Assassin’s Creed game special. They didn’t reinvent the wheel, but that doesn’t seem to be the intention. It’s reminiscent of another game, Bloodborne. Like Bloodborne, Origins seems to be more of a thank you to fans of the series, giving them the best gift of all, a damn fine Assassin’s Creed that will have tens of thousands of hours poured in to it. It’s a world that’s inviting the player in for a wonderful time, even if just hoping in and roaming around, which I found myself doing as of writing this. There’s a draw to the world, it’s full of mysteries, it doesn’t matter how long it takes and it’s exciting knowing they lie in wait for another day.