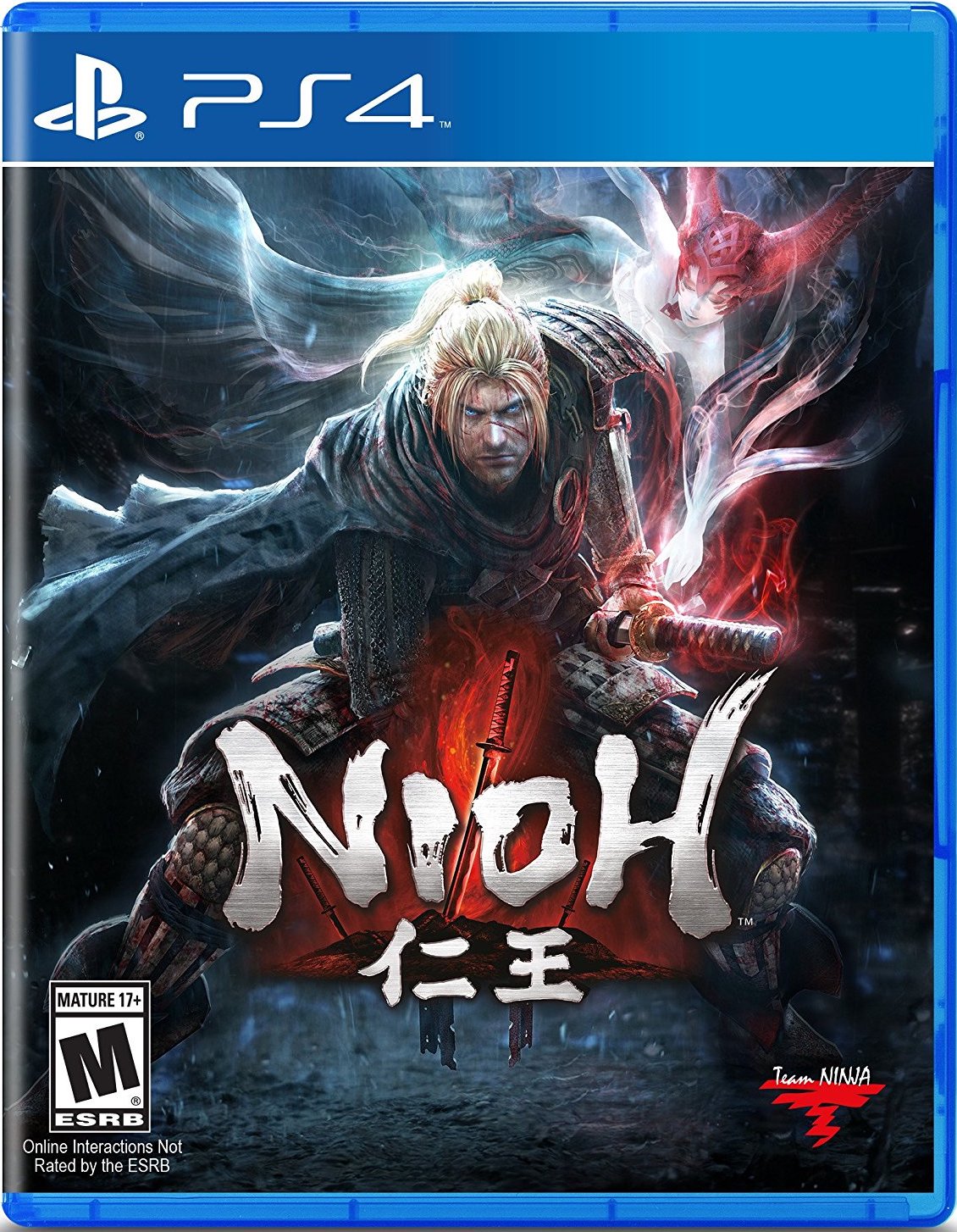 2017 has been one of the best years for gaming in a long time. In the first couple of months alone, we got NieR: Automata, Horizon: Zero Dawn, The Legend of Zelda: Breath of the Wild, Resident Evil 7 and so many more that followed. Among those games also happens to be Nioh, from famed developer Team Ninja, best known for their work on franchises such as Dead or Alive and Ninja Gaiden. The studio has taken a break from their development on their long-running series and brought us a new IP that exceeds Ninja Gaiden in its difficulty. While there are those who will call it a Dark Souls rip-off, this is far from the truth, as Nioh offers so much more than you’d expect. We move to the final years of the Japanese Sengoku period, where monsters infect the land with their corruption and historical figures attempt to combat evil with their own fictional sources of power. With such an appealing premise, there’s no question why the game was met with critical praise when it was released on PlayStation 4, and because of this, Koei Tecmo has decided to bring the profoundly satisfying action RPG to PC where it can shine.

The story behind Nioh revolves around a mysterious man named William, who is loosely based on the real life English sailor who traveled to Japan, William Adams. He escapes an English prison only to shipwreck in Kyushu, finding out things aren’t so great over there. The world of Nioh is completely packed with historical figures, such as Edward Kelley being the antagonist (even though his supernatural abilities were his own claims), alongside Tokugawa Ieyasu, Ishida Mitsunari and probably the most well known figure in Japanese history, Oda Nobunaga. The difference is that there is a huge emphasis on spirituality and Japanese folklore, such as humans possessing their own animal spirits and oni (demons) roaming the land. Really, the core story is far from anything special, even with the numerous cutscenes occurring before and after many of the missions. It mainly provides a means of expressing the absolutely dark and disturbing world that Team Ninja has created for 1600 Japan. This is one of the best parts of Nioh as the world is incredibly disgusting, but in a beautiful way. There’s some freighting enemies, along with bosses that have unique design you won’t find anywhere else. 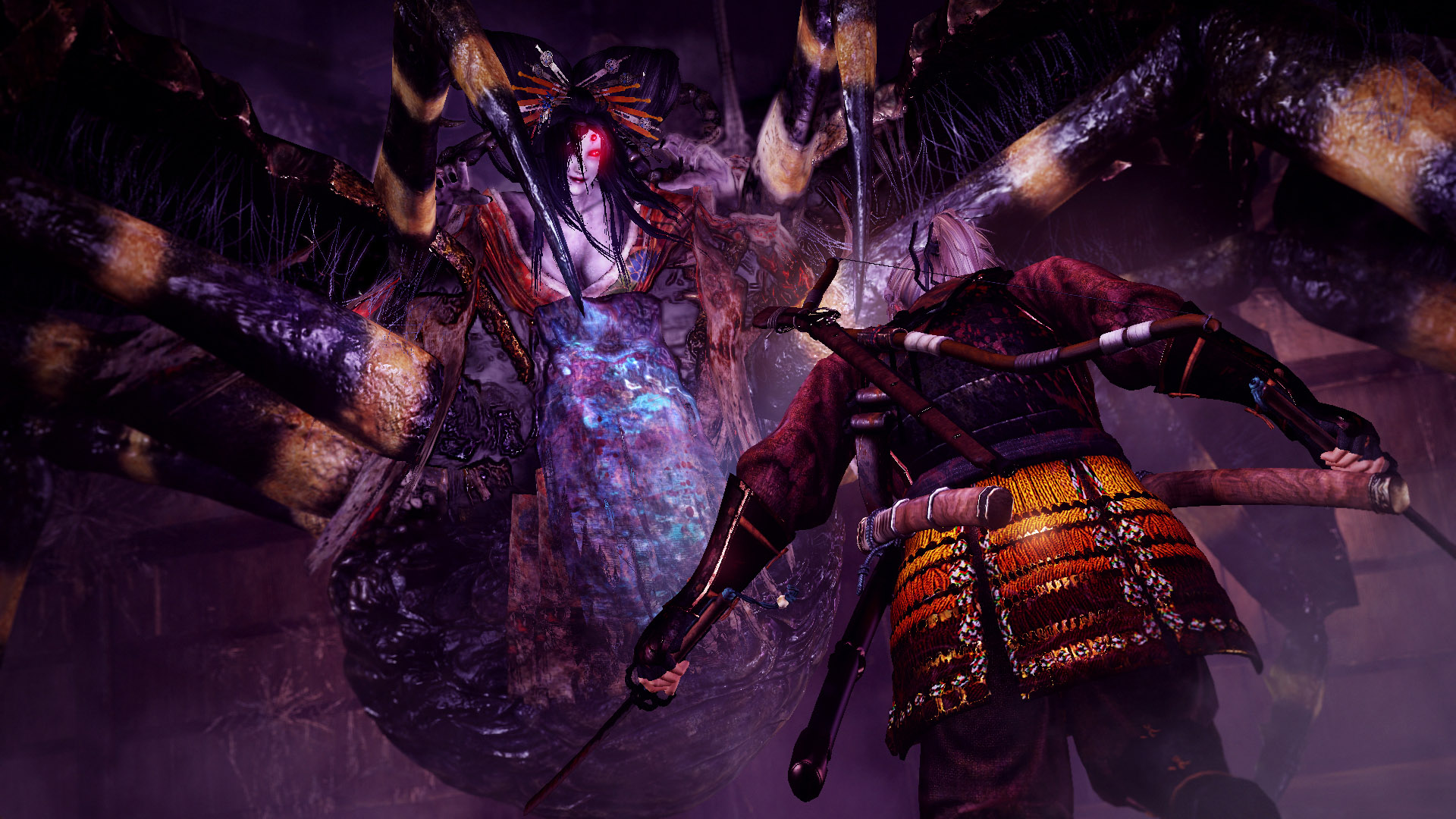 Calling Nioh a Dark Souls clone would do it an injustice. While it has a similar gameplay formula that more developers should replicate, Nioh is its own entity entirely, adding in its own alterations that actually make the experience better in numerous areas. This is still an action RPG where you will be cautiously going around every corner, trying to avoid well placed traps, but instead of being in an open world to explore, we are treated to mission-oriented structure, having players traverse vastly different areas of Japan in a mostly-linear set path. You can find yourself losing countless hours, not only with the lengthy main story, but the various side missions scattered about the world, altering existing maps to better fit the objective. It helps that Team Ninja has implemented an RNG loot system similar to games such as Diablo, encouraging you to find and create the best equipment possible. There’s nothing like an enemy dropping that ultra powerful weapon you didn’t know you were looking for. There’s always a hook, whether it’s through gear or the beautifully grim world, but you’ll keep coming back for more desired punishment.

Speaking of which, Nioh is also extremely challenging. Players like to think Dark Souls is an impossibly difficult franchise, but it pales in comparison to what Nioh has to offer. Not only bosses, but many random enemies in the world can, and will, instantly put an end to a run if not careful. With that said, your Guardian Spirit, which you’re able to collect many of, almost makes William feel overly powered, as he can sometimes completely decimate a frustrating boss with one well timed summon. It’s overly gratifying to finally complete a mission after hitting a wall, forcing the player to learn a boss’ exact movements and attacks to better counter. Nioh does have cooperative play, but it’s somewhat limited in its approach. Instead of helping anyone at any given time, the missions needs to actually be completed before jumping in with another player. Granted, cooperative play does make things easier in the long run, but those looking to run through the entirety of the game with friends might be disappointed. Regardless, Nioh has some of the best combat mechanics available, ensuring that there will be both a sigh of relief and an accelerated heart rate at the end of most missions. 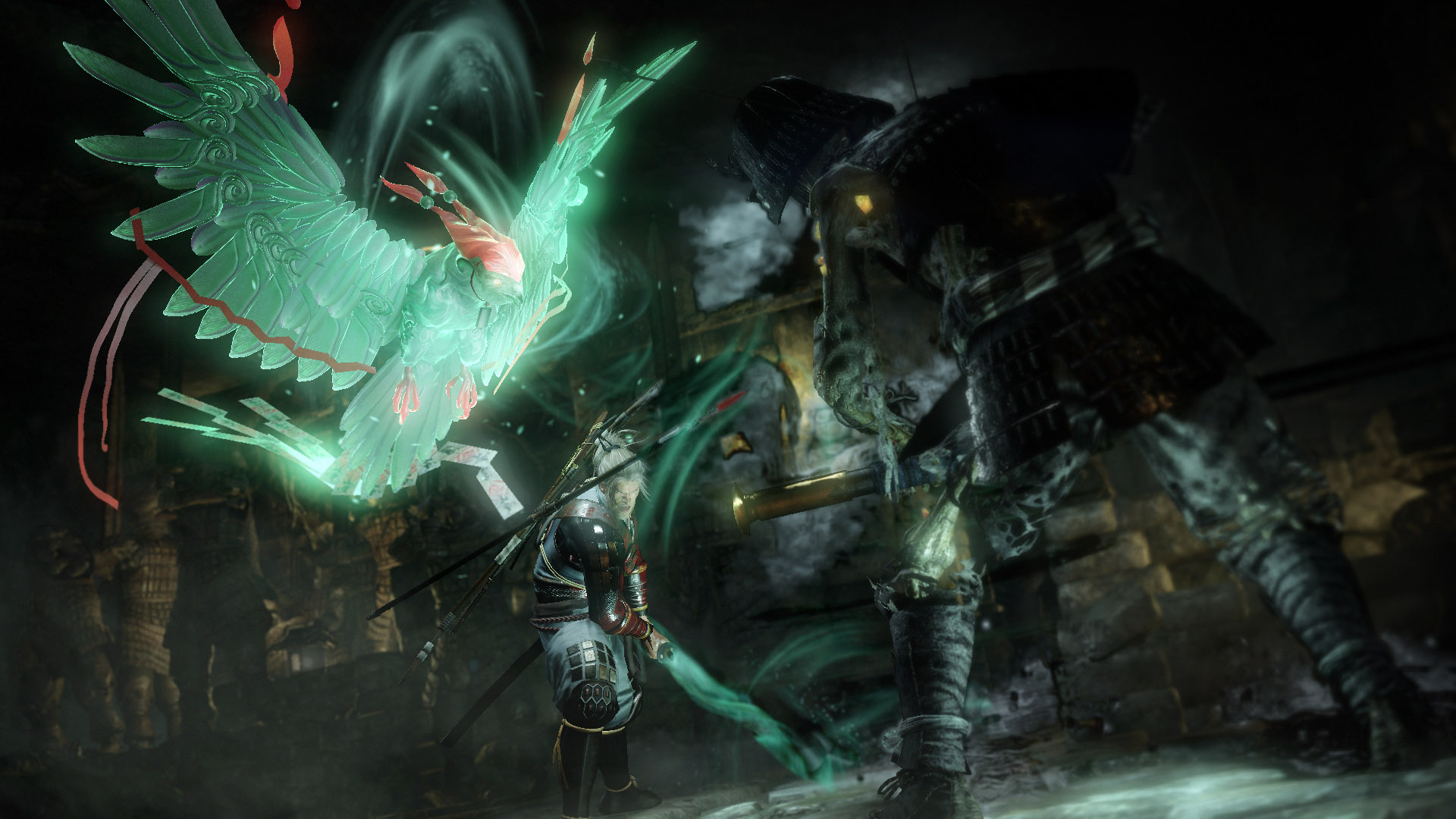 Now let’s talk about what the PC version has to offer over its console counterpart. Koei Tecmo hasn’t had the best track record when it comes to its PC ports, but fortunately, this is a little better than what we’ve come to expect from the Japanese publisher. Firstly, the graphical options are pretty light, but more than adequate all things considered. You’re able to select a resolution upwards of 4K (3840×2160), Shadow Quality, Dynamic Reflections, Ambient Occlusion and set a Frame Rate Cap. The PlayStation 4 and PlayStation 4 Pro versions had a couple of options to better suit your play style (either higher resolution and lower framerate, or vice versa), but fortunately these limitations are absent in the PC version – although that is what you’d hope for with any PC release. Nioh is an absolutely beautiful looking game, and it’s only complimented at a high resolution, running at a smooth frame rate. Because this isn’t an open world game, a lot of the mission areas are well optimized, even though there were a couple that seemed to drop frames more than you’d expect. Regardless, Nioh looks and plays beautifully on PC provided you have one that’s able to handle it. Using a GTX 1060 GPU, and an i5-6600k CPU, we were able to play this at 1440p with mostly a stable 60 FPS experience, sometimes dipping down ten frames.

Unfortunately, the PC version does have a downside, one that might be a deal breaker to some. This is a game that is borderline unplayable on keyboard and mouse because the port doesn’t allow for mouse controls. This is a huge problem considering the way FromSoftware did it, assigning the attacks to the left and right mouse buttons, was the perfect way to transition the series to PC. Sadly, Nioh lacks this, assigning the offensive and defensive actions to IJKL. If you can master it, great, but this is the least ideal way to play any game on PC, let alone a skill and time-based game such as this. You best have a controller, otherwise Nioh will be harder than it already is. 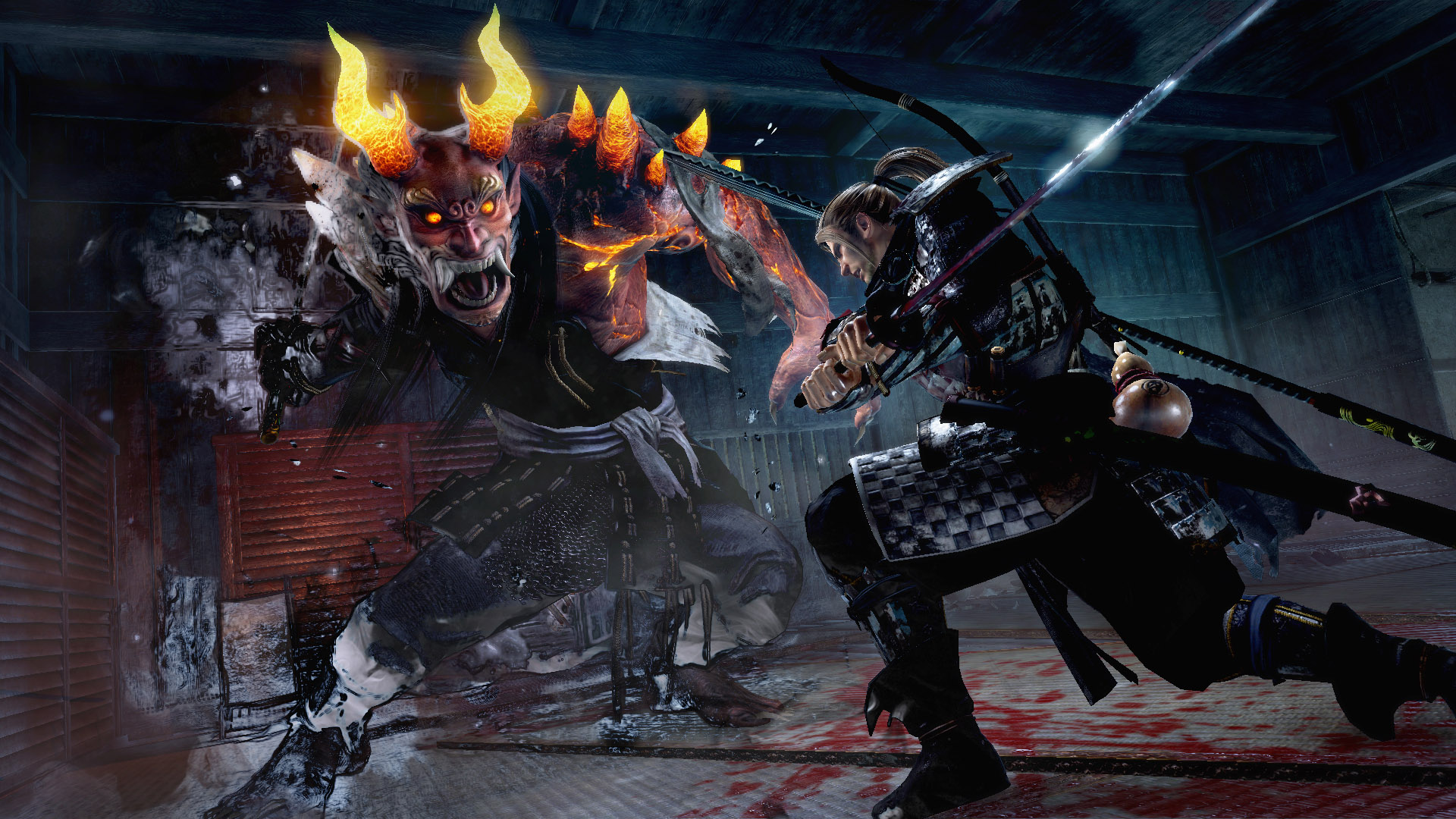 When it was released earlier this year, Nioh was far more than just a Dark Souls clone; it was an intense, action-packed and painfully-challenging action RPG that carved its own path. Mixing in historical figures with Japanese folklore brings out more of the dark and dreary world, even though the story itself doesn’t always pace itself properly. Its PC release maintains all of that and adds higher graphical options, ensuring there’s the capabilities to run it at 4K60. The only negative that can be said about the PC port is that a controller is essentially 100% required, with the lack of mouse support making the keyboard default controls frustratingly poor, especially for such a high skill level game such as this. Regardless, players with a half-decent computer and a controller will find themselves lost in a game that goes above and beyond what’s expected from the genre.