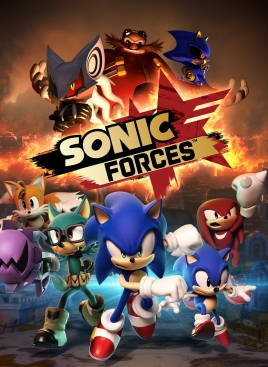 In hindsight, it may have been a bad idea for Sonic Forces to be released in November as one of the year’s final platformers. After all, titles such as Cuphead, Super Mario Odyssey, Hollow Knight and even Sonic himself with Sonic Mania have already created a massively high bar for the game to try and clear. And let’s not dance around it here: Sonic Forces doesn’t reach those same heights, despite being the next major entry in the franchise. But can it at least still make for an enjoyable platformer worth checking out and another decent entry in the Blue Blur’s library? The answer is yes, albeit not with a few missteps along the way.

The setup this time around is one of the biggest challenges Sonic has ever faced, as after a fight with Eggman where he unleashes his new ally, Infinite the Jackal, the hedgehog is bested by the godlike opponent powered by a mysterious gem. With his allies now believing him to be dead, Eggman finally takes over, spreading chaos everywhere, and once Sonic finally returns, it’s up to him and a resistance containing his best friends and an alternate version of himself to fight back against a massive army headed up by a group of former foes. It’s an impressive concept that has the makings of a deep, complex plot…that never ends up being executed.

Yes, despite ostensibly being another 25th Anniversary celebration for Sonic the Hedgehog and suggesting his biggest battle ever, the plot for Sonic Forces sadly wastes every golden opportunity it has. Eggman launches an all-out assault with an invincible ally and actually conquers the world…and the actual conquest is done offscreen, defeating Sonic and then — no joke — just cutting to some text saying that Eggman rules everything now. Our heroes now have to lead a small resistance to topple the empire…and not only are virtually zero other resistance members outside the usual main cast shown, but again, the actions leading to their hopeful victory mostly happen offscreen as well between levels. A whole batch of enemies from past Sonic games are working together…and without giving anything away, that alliance ends up being a cop-out. Classic Sonic returns like in Sonic Generations…and contributes nothing of significance to the plot. True, some will say the plot doesn’t matter in a game like this, but if that were the case, maybe the developers shouldn’t have invested in such huge setups with so little payoff. 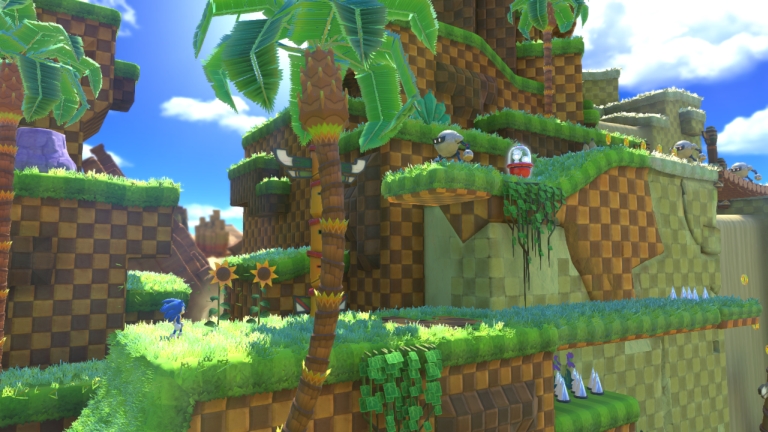 Still, the plot is indeed usually secondary to Sonic games, with the fast-paced gameplay being the main draw. And much like our preview a while back, it may be best to go over how each play style works here. Modern Sonic places most of the emphasis on blowing through levels at insane speeds, with a lot of segments on rails or playing like a runner, but things still work quite well, even if you come across those awkward segments where you accidentally end up sliding into an enemy you weren’t prepared for. But the homing attacks still work fine and the Wisp-powered boosts that lets you smash through enemies is fun, with everything here being executed fine.

The big draw this time around is the Avatar character, a new member of the resistance created by you (and named “Rookie” by the other cast members) that you can customize from the ground up, selecting from one of seven different animal species, each with their own bonus (wolves have rings drawn towards them, birds can double jump, etc). Not only can you then dress them up in whichever gear you can unlock to give them their own personality, but you also get to apply any Wispons you unlock, various weapons with different abilities and passive bonuses. And I’m just going to say it, the Avatar segments are the most fun bit of the game. Not only is designing your own character surprisingly fun, but they gameplay sections feel like a natural continuation of the Modern Sonic segments, with the Wispons being enjoyable to use. The only downside is that while they have a slight character arc, their lack of vocals means it gets downplayed. 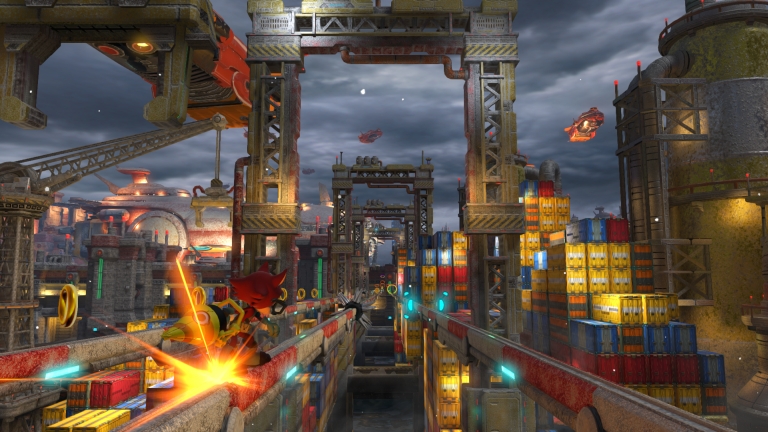 The Classic Sonic segments are, well, classic Sonic segments. They play out like your average 2D Sonic game and are as fun as expected, albeit they actually feel a bit slower than usual this time. But like what was previously mentioned about the character, these bits don’t seem to contribute much besides nostalgia, as Modern Sonic and the Avatar have 2D sections as well that are nicely executed. Still, it’s not an unwanted addition. There’s also the Tag Team levels where you control both Modern Sonic and the Avatar and can swap between them, although aside from a special double boost that’s basically a scripted segment, odds are you’ll just be sticking with one character.

As a whole, though, the different bits of gameplay come together well, providing the entertaining gameplay you’ve come to expect from the series by now. It also brings some impressive visuals, with a nice variety of color and detailed environments, making good use of setpieces such as giant snake attacks or robotic demolitions, with a lot of it getting the themes of war and resistance across nicely. The music is also a blast, energetic as always, even if the lyrics delve into their cheesier moments (although it actually loops around to provide a bit of charm, especially with the main “Fist Bump” theme).

So despite the occasional slippery controls and awkward 3D moments, the core gameplay of Sonic Forces is still fun. Too bad it doesn’t last long, as the game clocks in at about three and a half to four and a half hours. Yes, it’s actually shorter than Sonic Mania. 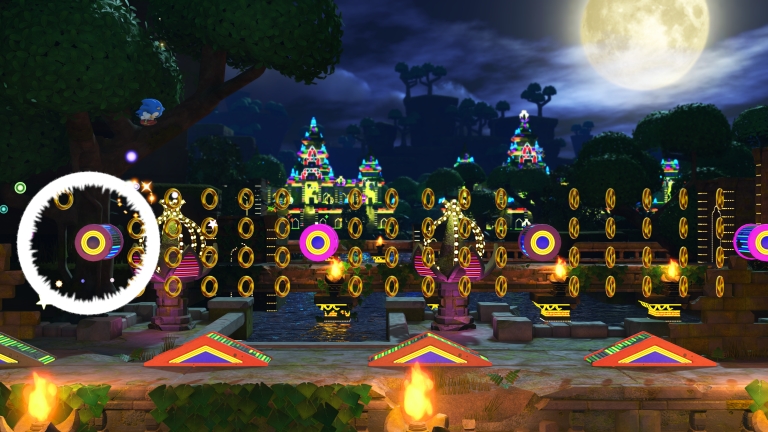 Now, I’ve made it clear before that there’s nothing wrong with short games. After all, as long it does everything it needed/wanted to do and present everything in a satisfying manner, length won’t be an issue. But compared to Mania’s vast and large levels filled with loads of secrets and shortcuts/alternate routes, Sonic Forces has levels that are too quick and don’t offer a lot of content. Thirty levels may sound like an impressive number until you realize that (with the exception of the boss levels) they can each be easily beaten in about two to four minutes. This, ladies and gentlemen, is the exact kind of danger you run into when you put too much stress on the idea that the franchise should rely on speed alone. Heck, at times I was again questioning if this was a game pandering to the speedrunning crowd first and foremost.

So the short levels sadly don’t have enough time to establish a lot of variety or any unique gameplay elements and they don’t offer much of an incentive to revisit them. It tries, with hidden red rings to collect or SOS missions that appear and challenge you with beating a level in one go, but all of this only leads towards more cosmetic items or weapons in the end. It doesn’t help that things never feel all that challenging as well, with even the “Hard” mode for experienced Sonic players barely putting up a fight. And to compensate for all of this, Sonic Forces feels a bit overstuffed at times with aforementioned SOS challenges, daily missions that provide bonuses that allow S ranks to be given out like candy and the ability to play as random Avatars from other players…again it tries, but these additions tend to come across as unnecessary. 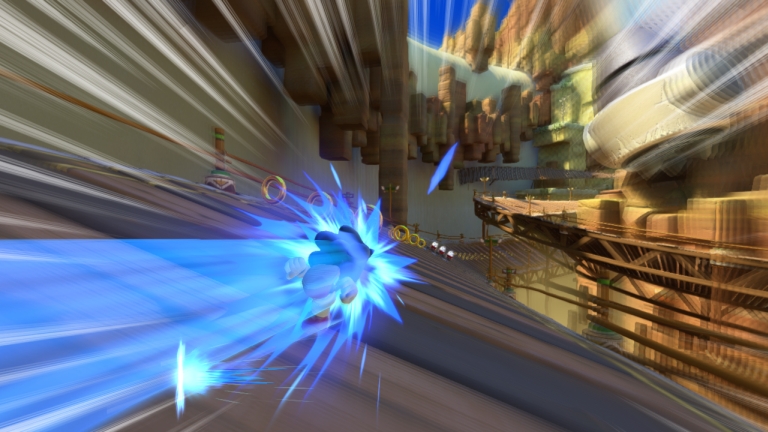 What ends up holding Sonic Forces back is that it — ironically — moves too fast to leave any sort of lasting impact, speeding through both its plot and levels in short bursts instead of leaving more time for anything to soak in. Outside of its length issues, however, the gameplay is solid, the character customization is incredibly fun and the aesthetics are impressive as always. It kind of goes without saying that it doesn’t hold a candle to Sonic Mania, which is still a must-buy and the one to pick if you somehow have to choose between the two, but it’s still serviceable enough that fans may want to check it out. Here’s hoping things slow down a bit for the next game, though.