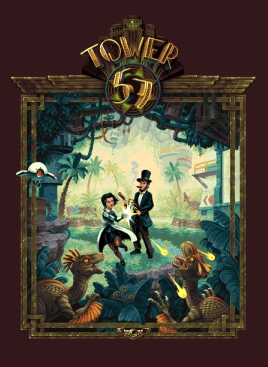 Tower 57 is one of those special kinds of games. It’s one that you love for a multitude of reasons, be it the visual style or the classic and simplistic gameplay, but every so often, you get angry at it. So angry that that you rage quit and basically have to sulk for a bit before you inevitably come back and try again. It’s a game that easily creates a love/hate relationship, basically. Overall, though, it ends up more on the “love” side of the spectrum, but how can such a seemingly innocent ode to the days of top-down twin-stick and Amiga action games end up in this situation, even accounting for the fact that as a game from this particular era, it may have a high level of challenge? Well, let’s just take a look…

Taking place in a dystopian dieselpunk universe where Judge Dredd-style mega-towers are the only societies that humans reside in, Tower 57 sees you playing a special investigative team (consisting of unorthodox characters as beggars, scientists, mafia dons and diplomats that double as Lincoln lookalikes) tasked with infiltrating the mysterious titular tower in order to make it to the upper levels in order to uncover some of the shadier doings inside. Of course, things tend to get a bit more complicated then expected, especially when dealing with some of the strange businesses and science experiments the residents are involved with, such as forced labor and dinosaur breeding (because the developers really wanted dinosaurs in the game and who can blame them).

Interestingly enough, Tower 57’s approach to story and world-building is reminiscent of the recent Doom revival of all things. Sure, there’s an interesting story at the core of it all if you take the time to pay attention, focusing on the quirks of an oppressive society that runs the area and the more fantastical sci-fi elements that come as the result of such a setting…it’s just that our main characters almost gleefully do not care about much of it. Their goal is to go in, get to the bottom of things and shoot the crap out of whatever is necessary to get to whoever is behind this. The way they react to what would normally be bombshell plot twists almost feels like it’s meant to be a parody of excuse plots from the day. After all, like a lot of us, the more important thing here is the hi-octane gunplay. 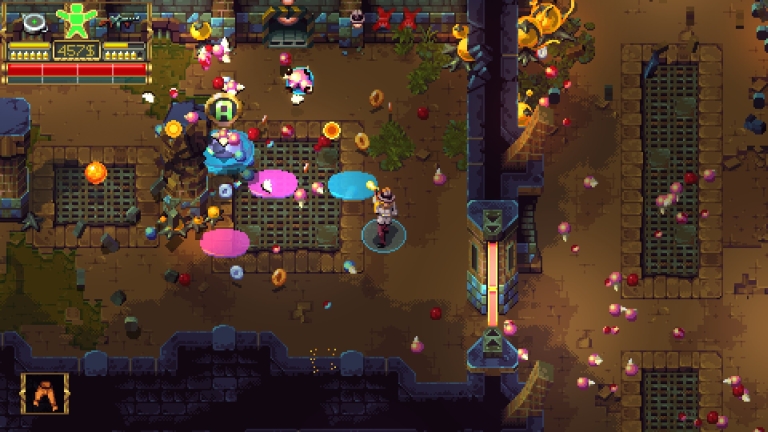 That said, the world of Tower 57 and the tales lurking within should not be overlooked. As the previous paragraph pointed out, two of the game’s greatest strengths lie in its sense of humor and in crafting this eccentric universe, one where news terminals inform us of foiled non-existent terrorist attacks carried out by pacifists while being sponsored by Fat Mama’s Implants (“Satisfaction guaranteed, or the lobotomy is on us!”), where bar patrons can be challenged to games of “nagel” to see who can hammer nails into wood (claw-in first) the fastest and where safety signs at the workplace tell employees to stop reading signs and get back to work (your character concedes that they may have a point).

Unsurprisingly, the impressive art style and hi-bit graphics contribute towards creating such a world. The dieselpunk setting pops to life here, with detailed environments such as ravaged sweatshops, lush penthouses and contaminated bathhouses infested with mutated organisms becoming rather colorful backdrops for mayhem, especially against swarms of equally colorful enemies. The hub world, Amor’s Den, deserves the most praise, teeming with citizens carrying on with daily life, where people beg for change and intricate statues decorate the streets as cars zip by. The sixteen-bit music should also be commended, fitting the old-school mood perfectly.

Tower 57 is a simple type of game with a simple concept and controls. Swarms of enemies and attacks come from all directions, pay attention and aim right stick in the right direction, fire and dodge, lather, rinse, repeat. And in that area, Tower 57 excels, with enemies and bosses putting up grand fights that can fill screens. There is still more to it, of course. There’s standard special attacks that can build up in order to take out on-screen enemies, and also two weapons and a default gun to carry, with a range of fun and unique firearms to discover and purchase (including ones actually made out of defeated enemies, like barrel cannons and giant turrets that can be worn on the head). There’s also an equippable secondary tool from standard grenades to Power Glove-style hacking tools (albeit one with a mediocre hacking minigame). All fun stuff indeed. 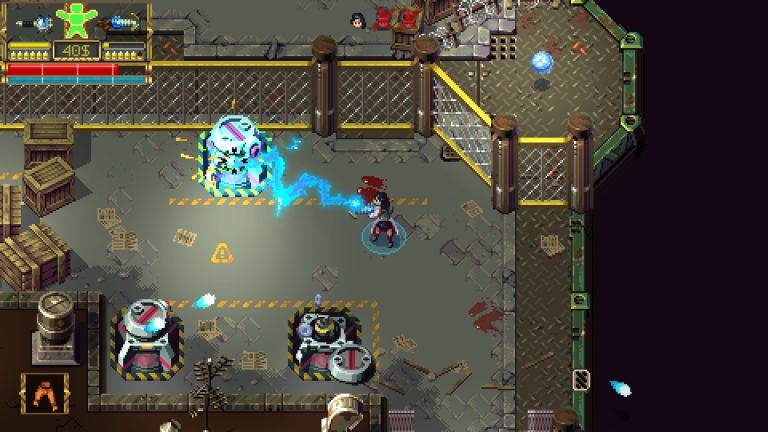 More unique, though, is the game’s concept of lives. Three available agents are available to play as at the beginning, each with their own special attack and personal weapon. They can be swapped between at certain locations, but if one dies, the next one is switched to, having to pick up previous gear from the other character’s death if desired. If all of the characters die, game over. Extra lives come in the form of Amber Balls that must be searched for, which are brought to a fortune teller to resurrect a friend…or sold for cash, adding to the moolah already collected and beefing up still-alive characters with new guns and upgrades instead, making for an interesting choice.

Speaking of which, the standard upgrades can be performed on player’s limbs such as damage and health bonuses (which will actually show as robotic limbs on the current character in-game), but can just as easily be lost in battles, requiring you to try and make it to the nearest vendor dealing in limbs to replace them…although these vendors are too far away most of the time and losing limbs will make you too helpless to fight your way to one. It seems more like a feature better suited for co-op play, where you can carry a fallen comrade.

The level design is also impressive, again hearkening back to the ’90s and titles such as The Chaos Engine or Zombies Ate My Neighbors, with huge areas full of secrets to discover, be it simple things like crates containing extra cash or false walls that lead to bonus goodies. It may be ammo and health or just bits of more lore, or even actions that lead to secret loot crates, a set amount of which are in each level (it is unknown if the satire was intentional). Spaces are always open just enough for the right amount of enemies when it comes to gunfights, and each area has its own unique gimmicks, minions and obstacles to introduce, along with several highly-destructible environments.While exploration is encouraged, however, it does have a habit of not telling you which routes may be suddenly locked behind you, creating an annoyance, and there are even a couple of bits later on where certain actions can create unwinnable scenarios. Still fun playgrounds nonetheless. 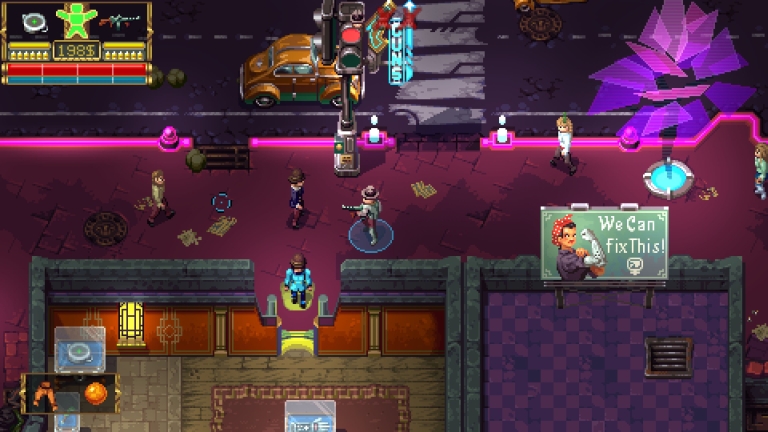 Given all of that praise, you may be wondering why, as mentioned earlier, I ended up getting angry at the game time after time. Well, what it basically comes down to is one annoyance that made things aggravating after a while, especially in the latter half of things: Tower 57 is lousy when it comes to checkpoints. All too often they are dragged out for long stretches of time, usually only saved for right before any bosses. The end result is that you spend nearly half an hour navigating labyrinth-like areas, taking down killer machines like a champ, but then have all of that progress suddenly destroyed due to a fluke death (especially in one section with enemies wielding buzzsaw guns that that instantly take off limbs). I don’t care if other action games of the ’90s were like this, sometimes the “warts and all” approach doesn’t benefit things.

It just feels cheap at times, especially when combined with the minor flaws mentioned earlier, since removing one of them could remedy things and instead it just amplifies them. Did you fiddle some platforms earlier and now things are permanently blocked off? No choice but to quit and restart! Did you get your limbs destroyed and now need to crawl to a limb vendor or to an outhouse to change characters at? Whoops, the path back has a locked door now, even though things are one hundred percent enemy-free! So yeah, beware of having to repeat sections of the game over and over. Games such as Cuphead or High Hell are also challenging games where multiple deaths are basically an inevitably, but the difference is that with those, you leap back into things extraordinarily quickly and levels are quick just long enough so that it isn’t a hassle to make it back to where you perished. But Tower 57 means having to wander and replay quite a bit upon death, hindering things to the point where the occasional rage quit may occur. 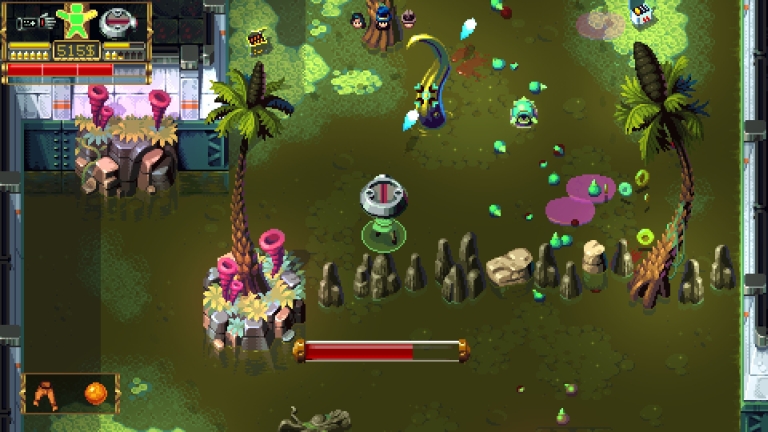 Even with the issues that arise from massive gaps between checkpoints and a few niggles here and there, Tower 57 is still a blast, accomplishing its goal of reminding us why these types of games from the Amiga era ended up being classics. The humor that comes from the oddities of the twisted world provides endless charm, the lush environments are eye-pleasing and the combat is fast-paced, challenging and just plain fun. It’s a terrific action game worth checking out for retro game enthusiasts (and everyone else, for that matter) and one you’ll be coming back to…even if it’s just because you stormed away for a moment after a mistimed rocket launcher blast killed you right before the boss and sent you back to square one.