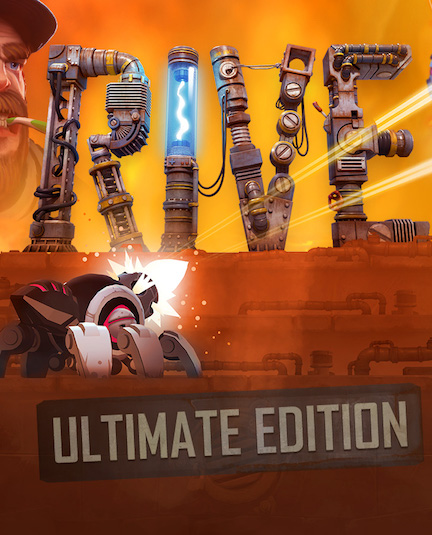 Roughshot is a space-scavenger wandering the galaxy in a spider-tank, keeping an eye out for derelict ships and all the valuable scrap they contain.  It’s not the most sociable lifestyle around, but it makes him happy, especially when it involved breaking things.  The latest ship in his sites is a doozy, huge and with the promise of more goodies than he knows what to do with.  It’s also not as dead as it looks, with a friendly, chatty robot hanging around and getting in the way.  Roughshot is neither a complicated person nor a patient one, but the robot keeps coming back with a new body no matter how many times he fills it with lead, and to make matters worse, it’s got a creative streak that manifests itself in the design of an endless horde of enemies ranging from cannon fodder to giant bosses.  The derelict looked like an easy haul from the outside, but it’s actually a trap with no way out, except for the one about to be torn in its side by a spider-tank’s unlimited firepower.

Rive: Ultimate Edition is the tweaked and enhanced version of the original Rive, a side-scrolling shooter with a focus on pure, fast-paced action from the moment it starts to the very end.  The spider-tank is a nimble little thing, equipped with a double-jump and a machine gun with limitless ammo fired twin-stick style, plus four special weapons for when you need to clear some space quickly.  While Roughshot is primarily a shoot-first scavenger, he’s also handy with a keyboard and the tank has a hacking beam that allows it to take over certain types of enemies to have them fight at his side for a while.  It’s a fairly basic set of moves but that just means the action can get incredibly intense as each new scene and set-piece requires precision movement and shooting to get through.  Survival can be hard enough when you’re fenced in with lasers but getting a good score also means not getting hit so the multiplier doesn’t reset.

The basic structure of Rive is divided into thirteen chapters, each starting from the same central location before warping to a new section of the ship.  Every level is divided up into a series of encounters, most separated by a short stretch of run & gun before the next set of barriers falls into place and the enemies stream in.  Sometimes you’ll be trapped by lasers, or stuck on a conveyor belt while the walls rise and fall, or hovering in mid-air in a gravity-free bubble, and the attack rarely lets up for a moment.  Blue spheres attack in groups, squid-like bots let loose missile swarms that you can shoot to divert their trajectory away, little yellow guys stream in one after the other, space whales only drop their shield long enough to drop a swarm of attackers, and the spider tank’s gun rarely stops firing.  It’s constant action with a strong punch from the moment Roughshot approaches the ship, and never for a moment does Rive forget it’s a videogame. 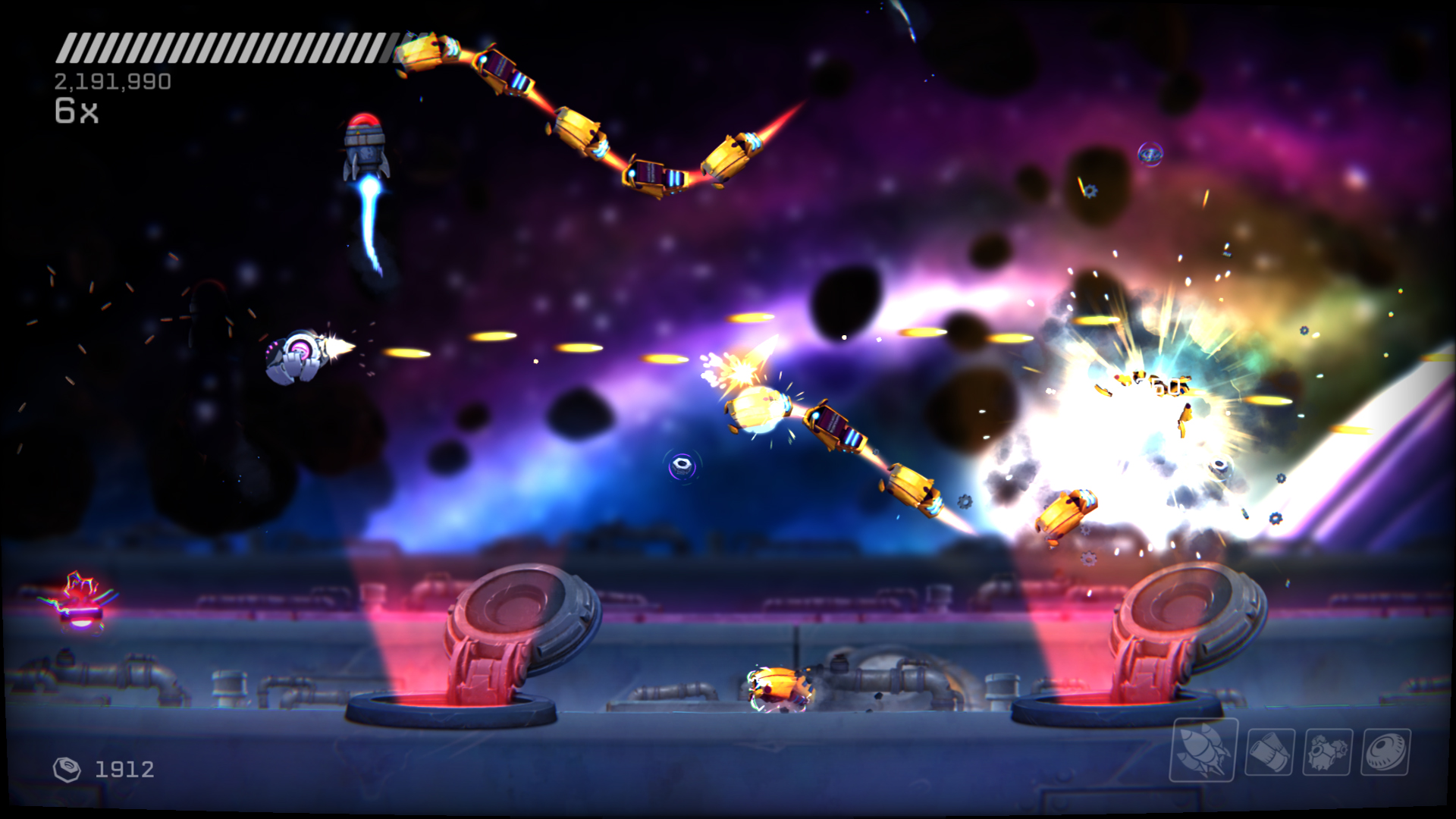 Rive likes being a game, and from the moment Roughshot activates the side-scrolling camera and cues up the game music it never forgets that it’s at its best when causing havoc.  References to other series abound, such as calling the host robot a metal slug or getting caught in an homage to Gradius.  Each level is also graded by score, with survival being something that happens while you’re keeping the combo alive.  Every enemy and piece of destructible environment contributes to the score multiplier, to a total of x20, and each hit knocks it painfully back to x1.  Checkpoints are common enough that losing some ground isn’t a big deal, but dropping a multiplier in the middle of what had been a good run is a loss you can feel.

Not all runs are good runs, though, and here’s where Rive struggles a bit.  Each level being constructed from set-pieces means that there are bound to be a few clunkers along the way, and several from the latter half of the game slowed the action down and felt artificially limiting.  The spider tank can’t fire in water so of course there are water-based areas later on, and dealing with them means hopping from water to fire for a bit, dipping back down to dodge, hopping out again, and back and forth until done.  One particularly obnoxious section has lasers sweeping across the room up top while an underwater saw blade does the same in reverse below, and when I got past that section I was happy to see I hadn’t snapped the Switch screen in half.  As you play though the game you open up new modes that let you head back in for score attack, play an area with a one life and no checkpoints, etc.  Most levels are worth a couple rounds of score-chasing but there were scenes that, once done, I was more than happy never to play again.  Thankfully there are only a few of those, but when they show up they stop the action dead. 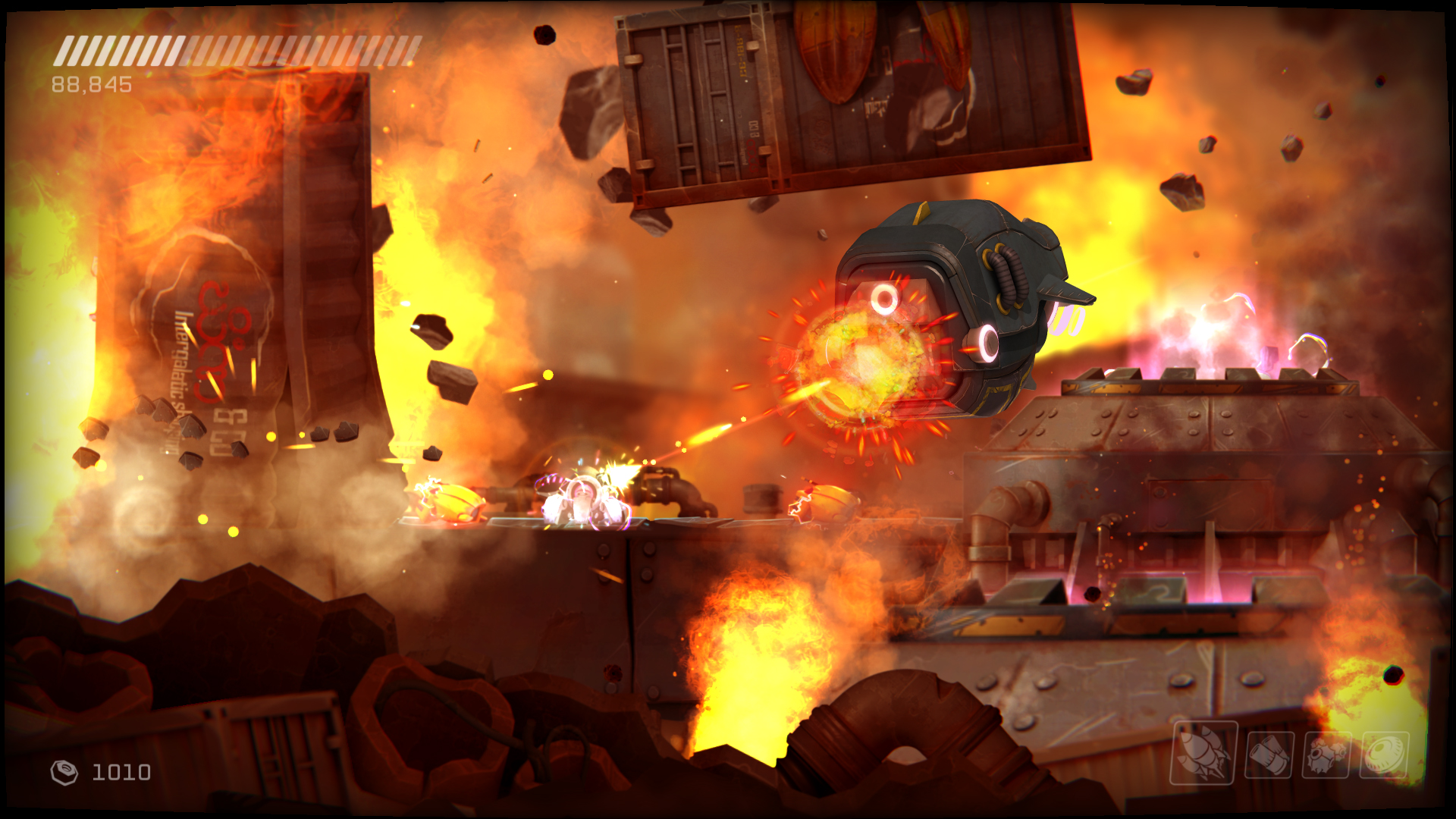 Basically, Rive is pure 16-bit action from back when console games were still balanced between the arcade and more modern-style adventures.  While it’s much prettier than anything the Genesis could do, it would have been right at home with the best of that console’s library.  Run, gun, blow stuff up real good and there’s even plenty of fun banter between Roughshot and the unnamed robot antagonist.  The game moves at a solid 60FPS at all times, the backgrounds and settings all look fantastic, and anything that gets shot goes down hard.  Rive: Ulimate Edition has a few extra bits for the Switch, such as co-op where two players can use a Joy-Con apiece to work together controlling the tank, one on shooting and the other on movement, and it loads faster and has a few tweaks to the levels, but other than that it’s the same great shooter that came out on the other consoles and PC last year.  It was a lot of fun then and it’s a perfect match with the Switch, letting you get in a bite-sized round of shooting or going for a multi-hour play session depending on available time.  That’s what classic action shooters do best, and despite the occasional misfired encounter, Rive pulls it off with style and an ending that leaves the player hoping that, just maybe, there might somehow end up being a Rive 2 after all.