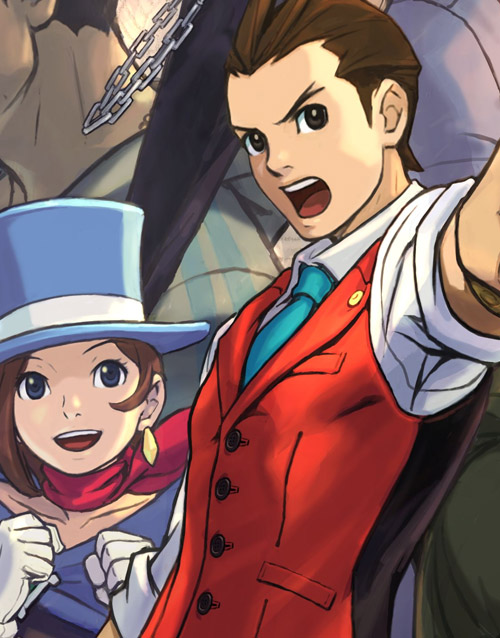 Apollo Justice was the fourth entry into the Ace Attorney series that saw release in the west nine years ago, bringing with it a new main protagonist to replace Phoenix Wright as his original trilogy came to its finale. To celebrate 10 long years since Justice’s release in Japan, Apollo finally makes his way to the front lines once again in a 3DS remake. Although Apollo Justice also saw a similar release on mobile platforms last year, the 3DS version brings it home by being the most authentic recreation of the original DS title fans have come to know and love.

Seven years have passed since the ending of the Phoenix’s story, since then a fresh new defense lawyer by the name of Apollo has studied hard and is beginning his first day on the job. Things couldn’t be more confusing though as his first client is the famous Phoenix Wright himself, who retired his lawyer’s badge for mysterious reasons years ago. With nothing left to do but let his chord of steel ring true, Apollo dives into the dark first case to see if Phoenix was really the murderer of the crime he has been accused of. The opening case acts much like those in previous titles and introduces players to basic mechanics, and following a fairly lengthy beginning puts Apollo through three more cases to uncover the truth of each mysterious case.

The Ace Attorney series is a mix of visual novel style, with an emphasis on story and tons of enjoyable dialogue, along with a detective styled puzzle involving finding clues and questioning people to uncover the truth. The first part of most cases has characters exploring different areas to find items and question various people who are more than likely involved to some degree with the case at hand. This has Apollo going back and fourth, examining his surroundings to look for clues or just for characters to quip in about the bizarre things left behind. After the investigation has gone as far as it possible can, the team takes to the court to defend their chosen client. This acts as the main puzzle solving portion, where Apollo must cross examine witnesses and dig the truth out from their faulty statements. Apollo himself also has a special ability he can use to help him during tough times, as he is able to closely examine witnesses to discover any nervous ticks they have while lying or not being completely open about something. Presenting an item irrelevant to the current conversation will result in a penalty, shown as a green bar that slowly drains with each mistake, and emptying it entirely results in a game over. Fortunately players can continue not too far from where they left off if this occurs, but it’s always best to pay close attention to avoid taking any hits. 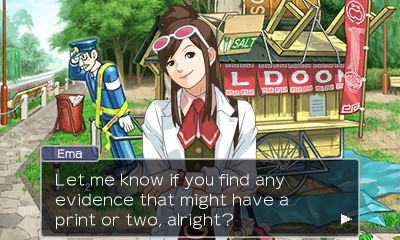 Right off the bat, the visual upgrade from its predecessor is noticeable. Character models look clean and sleek, with details on their person being more easily visible. While color of the original varied depending on what system it was played on, the 3DS remake is much brighter when compared side by side. Backgrounds are now clearer and show more details than ever before, however they are ever so slightly more zoomed in than the original which simply cuts off some outside border which didn’t contain many details to begin with. The audio comes in at a much higher quality, with songs and even sound effects sounding clearer than ever. Those who do enjoy turning on the 3D feature will find a simple level of depth, with characters popping out and the background looking distant, which is about the most that can be expected from the originally 2D visual novel style.

Aside from audio and visuals, this version of Apollo Justice has added three new features to general gameplay. The first is a minor one, and simply puts an actual save button in the bottom right corner of the screen that can be tapped instead of pressing start to save. The second is on the starting menu, and is an option to ‘Skip All Text’ which starts off by default. Turning it on simply allows players to scroll through text faster, while keeping it off allows the text appear at the normal pace intended and even continue through the dialogue if the ‘A’ button is held down. The last addition is the inclusion of the original Japanese version of the title. Changing languages not only changes all text and audio, but acts as an entirely different save file due to the differences between each version and localization changes made to accommodate an english speaking audience. While it would certainly be harder to play without knowing Japanese, like its addition to the original trilogy’s 3DS remake it’s a nice touch that is greatly appreciated by fans who want to see the series in its original format. 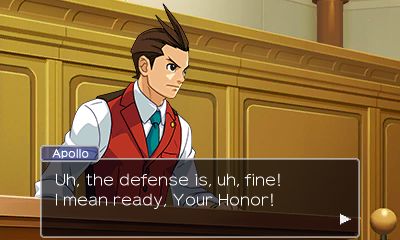 By bringing Apollo Justice to 3DS, every main title in the Ace Attorney series is now readily available to fans looking to dive into court cases on the handheld. Upgraded audio and visuals make this more beautiful than ever, even trumping the work done on the original trilogy’s remake for 3DS. Fans of the series will be satisfied to know that the effort put into this remake is well worth picking it up again and players who haven’t been able to play this middle entry prior now have easy access to one of the early turning points in the series. Although it was a nine year wait, it’s more than satisfying to enjoy Apollo Justice: Ace Attorney once again looking as great as can be.