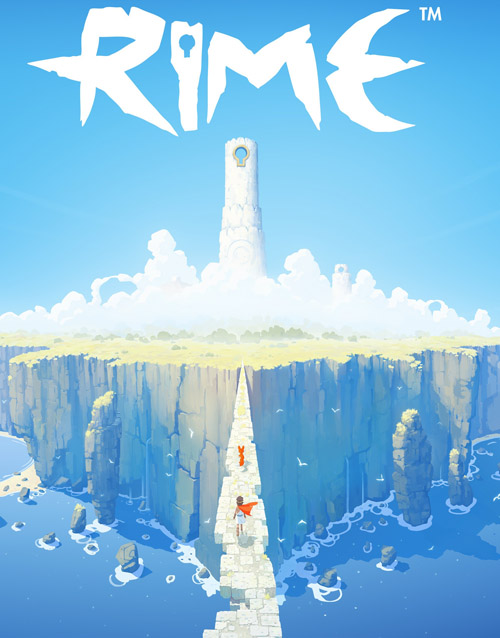 RiME is a story about grief, with every level representing a different stage in the processing of losing a loved one. In a lot of ways, RiME is reminiscent of Journey, with its silent protagonist, the way you interact with the world through sound and the overall sense of mystery behind why you’re there. Of course there’s also the story of life and death that they both share. RiME adds the element of puzzles, though, which makes it more of a proper game than Journey, which many consider more of an interactive experience. While the overall gameplay is fun, it’s hindered by technical bugs that cause frame rate drops, delayed reactions to button presses, and sometimes even game breaking scenarios that require a “restart from last checkpoint” to fix. These along with a few other annoyances make RiME more frustrating than it has to be, but when you look at how beautiful it is and the story that it tells so well, it’s hard not to forgive it.

From start to finish, RiME tells the story of a boy named Enu who is lost on an island, and without saying a word, is able to depict the five stages of grief. Denial takes place on a beautiful part of the island, with little animals scurrying about and seagulls flying around. It’s serene — it’s as if nothing is wrong. You sing, solve puzzles and everything seems great. Denial is also a simple level, with the only objective being to shout at statues to get them to release orbs of light that travel to a central statue. Getting to them is the tricky part, with towers that need climbing and statues that needs yelling at. Once you find your way to the next level, though, things change.

Anger takes place in a desert biome, with a large flying monster who’s after you. Staying in the sunlight will give him a chance to scoop you up and take you away. Running from cover to cover is intense, as he locks in onto you quickly. The objective at this stage changes — instead of completing a statue, your goal is to relieve large windmills of the black gunk held inside them. To do so, you must climb each tower, each wrought with a unique set of puzzles, and pull a block out of the way in order to release the black gunk. Bargaining, Depression and Acceptance all have their own unique types of puzzles and if you think about it, represent their respective stages well. 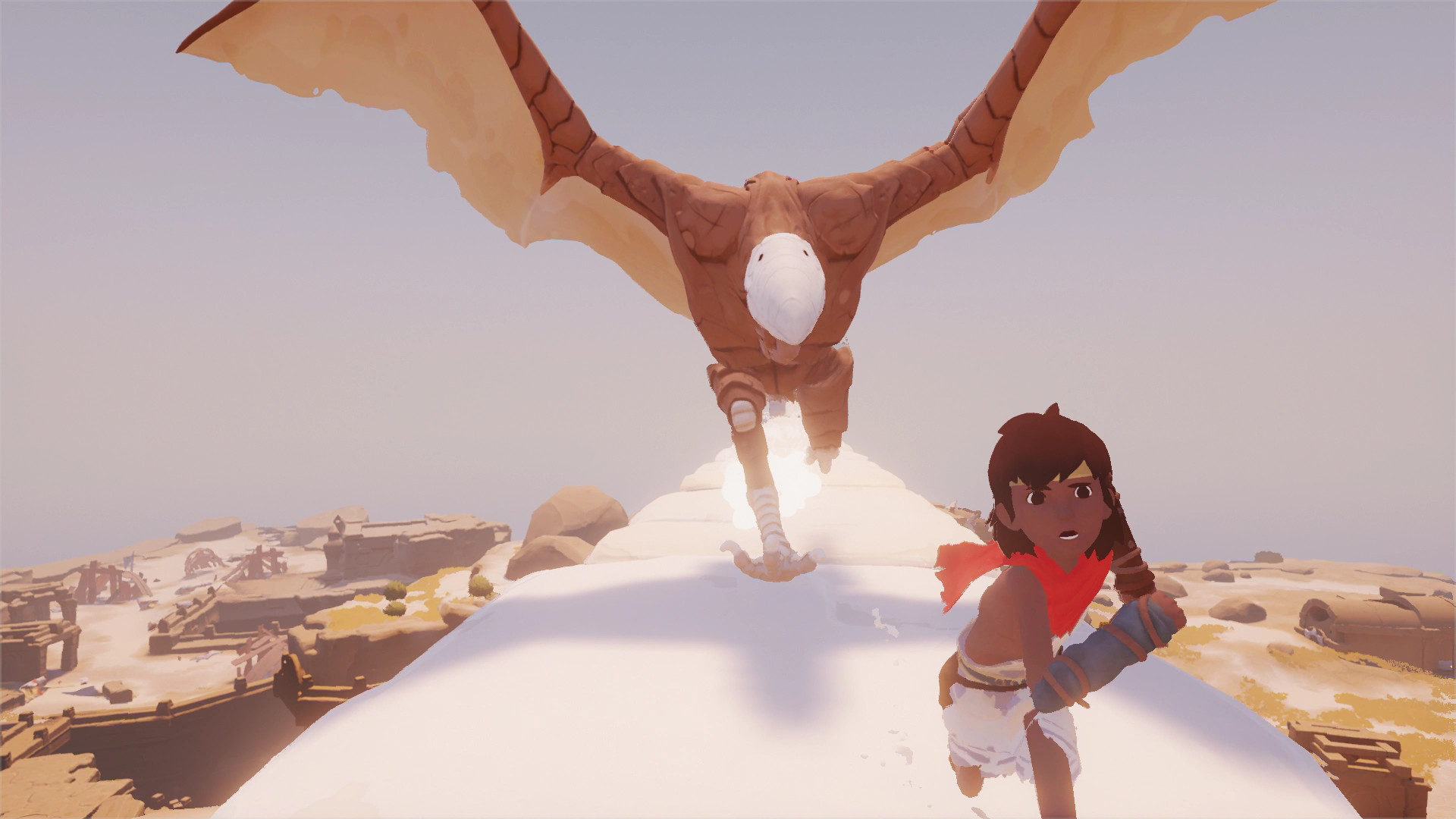 The basic gameplay elements — climbing, carrying, throwing, yelling, singing — are all well executed, but sometimes have a habit of not acting the way they’re supposed to. Sometimes Enu will jump the wrong way and fall to his demise. Sometimes you’ll try to pick up an orb of light (one of the puzzle mechanics) and he just won’t do it. Sometimes you’ll try to climb up a climbable object and he jumps frivolously and sometimes you’ll end up shouting at a statue and it won’t do anything. After re-positioning yourself or just simply trying again, you’ll be able to complete the task, but I ended up spending a good chunk of time trying to vault over walls that should have been easy to do in one go.

Other bugs were worse. There were many times, even in handheld mode on Switch, where the frame rate was dropping hard. It would stop after a couple seconds, but then it might do it again a minute later. In my eight hours of playing, I probably experienced significant frame rate drops at least five or six times. I understand that it’s a big game world that they’re rendering and that the Switch is somewhat of an underpowered device, but RiME is low-poly (not to say that it’s not beautiful) and there’s not an incredible amount of things going on at one time. It was sad to see such a pretty game bogged down by low frame rates. 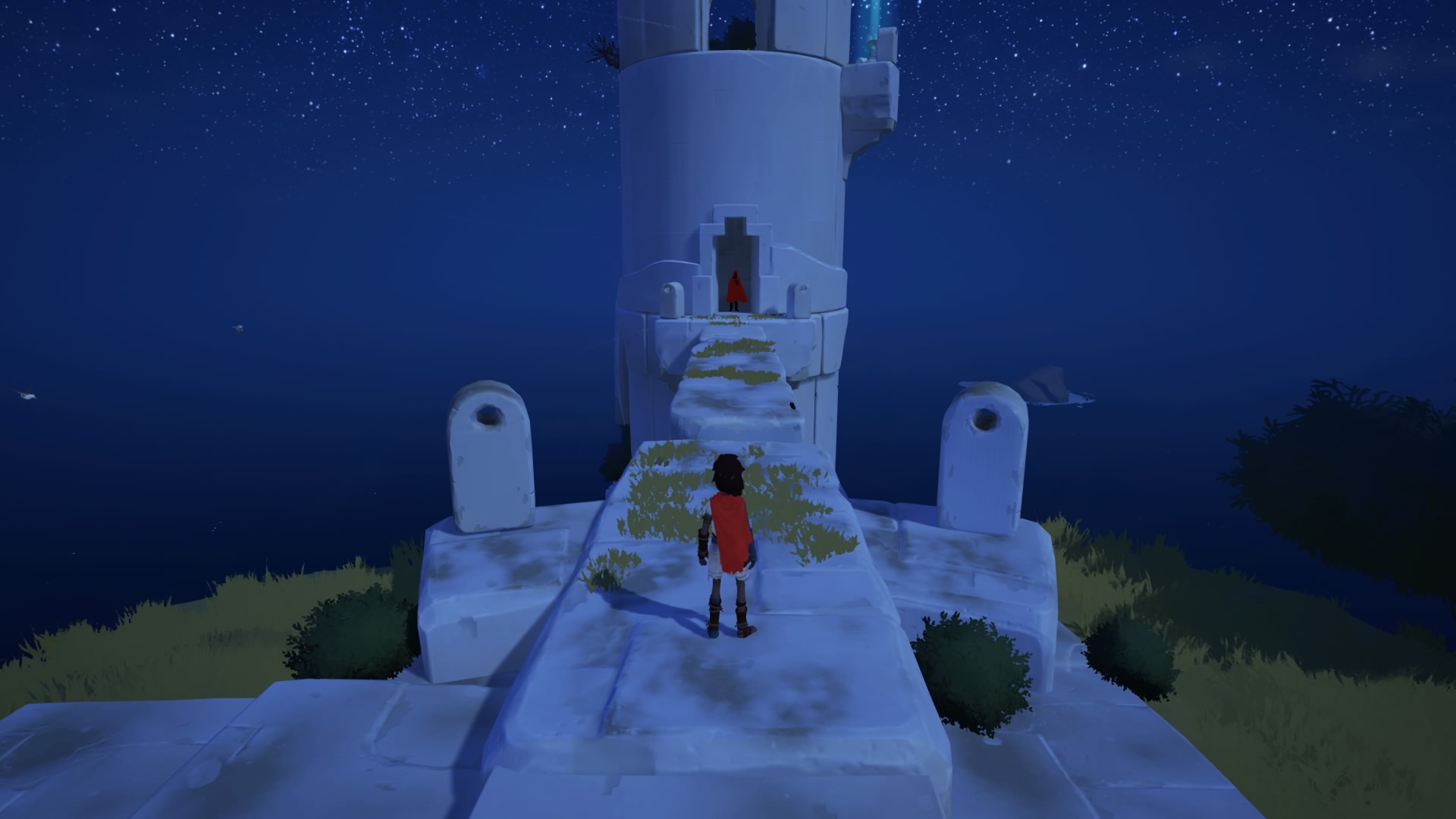 There was also one game-breaking bug that I encountered. In the Bargaining level, you’re accompanied by a large robot who follows you around with his one eye and two long legs. He was following me back to an open area where I was bringing him to finish a puzzle and he couldn’t get through the door. The door was open and he was “walking,” but he wasn’t moving. I tried for a couple minutes to free him, but I ended up having to restart from a checkpoint. And checkpoints in Rime are kind of few and far between, so it took me back a good deal. Again, it was too bad that such a cool and mysterious game had these things happening in it, because it really is breathtaking.

The artwork and music are both stellar and work together to bring out emotion in every scene, and when the gameplay is working as intended, it is really a lot of fun. Sometimes the way forward is not always extremely clear, but figuring that out never takes too long. The direction of RiME’s cutscenes is great too. They can be intense, somber or just beautiful, depending on what they’re trying to portray in that moment. For an indie game, there are also big set pieces that impress. 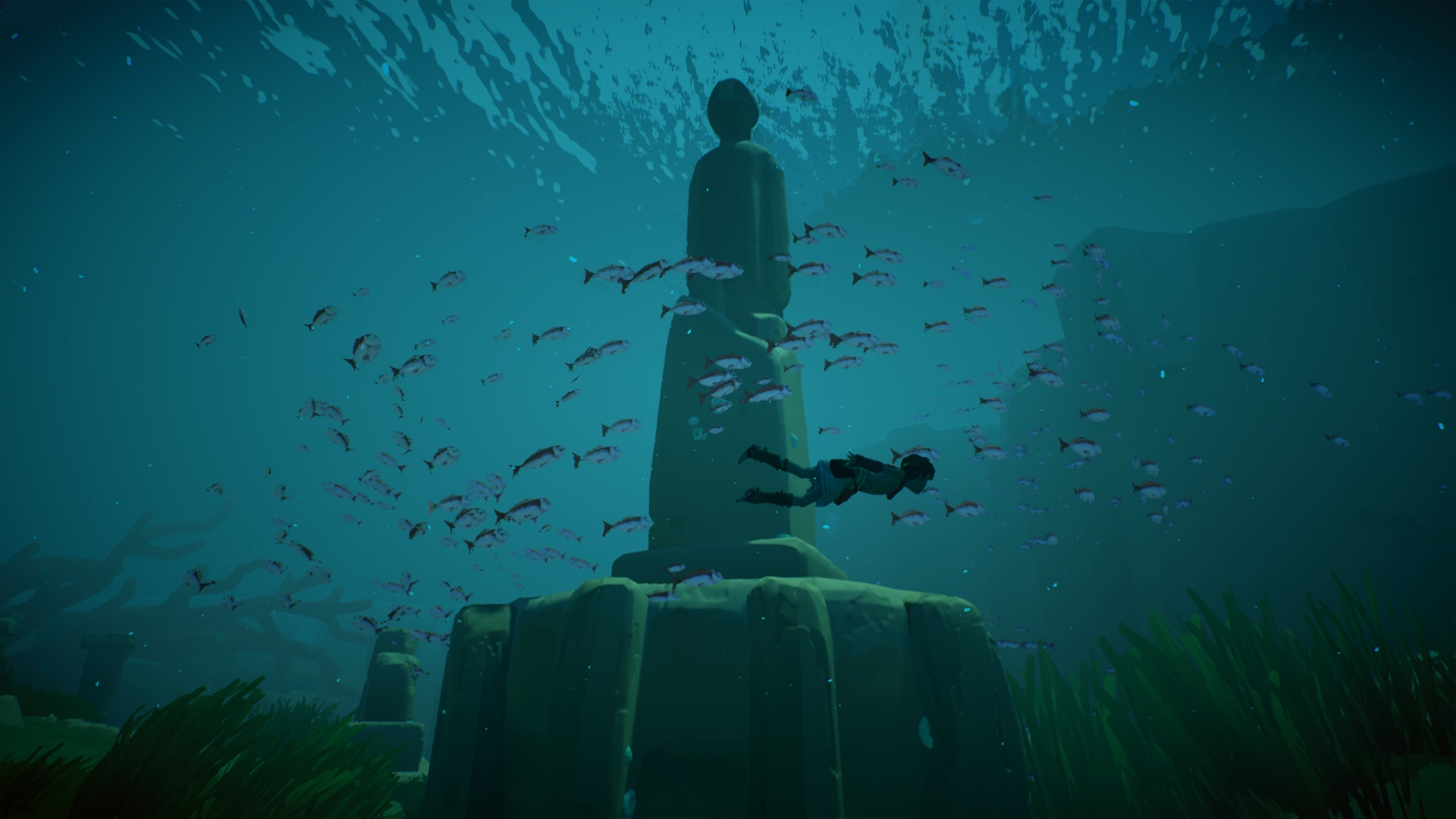 The puzzles themselves are also great. They’re not too hard or too easy and they’re varied both within a certain stage and also greatly between stages. I’d have to say that Bargaining was my favorite. The puzzles were complex but felt rewarding when you finally figured it out and there are crazy mind games that they play on you in this stage. One of the mechanics, however, spans throughout the entire experience. There are small platforms that you stand on and look through a peephole to line up two objects. This would either unlock doors or create a whole new object out of the two things lined up. You could then use the new object to progress through the puzzle. It was cool to have perspective alter reality.

Collectibles are also a big deal in RiME, although I myself didn’t find many of them. Each stage has two or four pieces of a disc that when found would give you flashes of images that hinted at the story in more detail. You could also find toys of the boy’s that were hidden around each stage. The placement of the toys felt similar to how treasures are hidden in an Uncharted game, while the disc pieces felt more prominently placed. They were all hidden well, though, off the beaten path and only spotted by an eagle-eyed observer. As I am not one of those, however, I did not end up finding many of the disc pieces or toys. 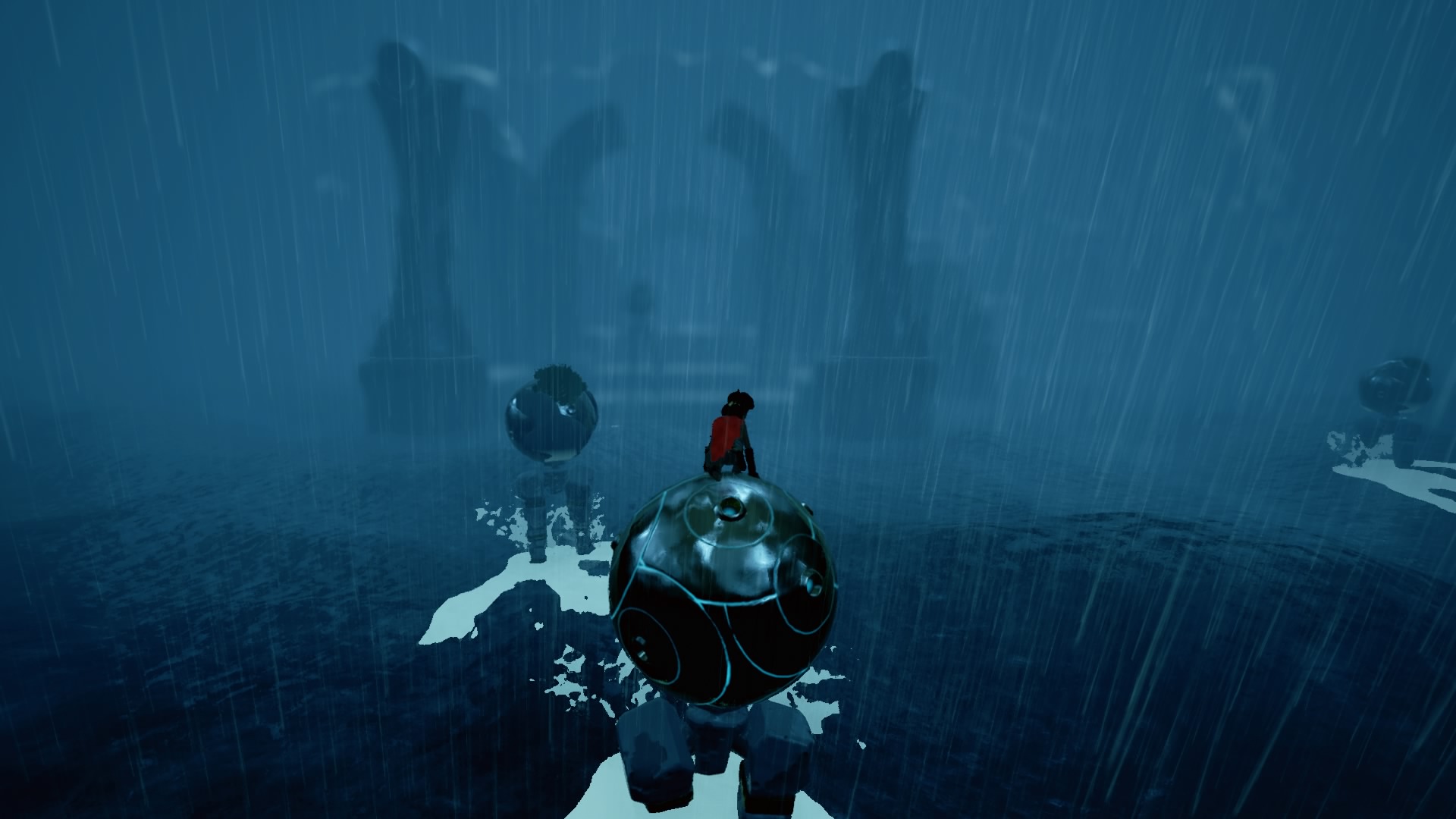 While it’s an indie game with issues that stem from a lower-than-average budget for its size and the bugs that come with it, RiME still captures emotion and beauty as it tells a heartwarming story. The bugs can be frustrating at times, but aren’t reason enough not to play it. Rime will run you $39.99 and takes about six to 10 hours to complete. In the same vein as Journey, RiME is a capable entry into the ranks of these emotional and heartfelt types of games.