It’s a good time for the fantasy-action FPS all of a sudden.  Last month saw Amid Evil announced, treading in the near-forgotten footsteps of Heretic, and now there’s Apocryph putting a claim on similar territory.  There’s plenty of room for both, seeing as they’re different in style and it’s not like that genre niche is overflowing with competition, plus the Apocryph alpha is available to play now.  The demo is a solid, fast round of magical FPS action using both melee and shooting in a non-linear level, with a good number of enemies who get torn apart into chunks quite nicely when you go for the overkill.

The story of Apocryph is that of the Arbiter, who used to be a fairly important member of the Xilai religion until getting exiled.  Now he’s come back and found that his homeworld is a mess, overrun with demons, beasts, and the undead.  Seeing as practitioners of the Xilai worship death it seems like the kind of thing that was bound to happen some day, but the Arbiter is determined to get a more specific answer and that means bringing down the carnage on everything in his path. 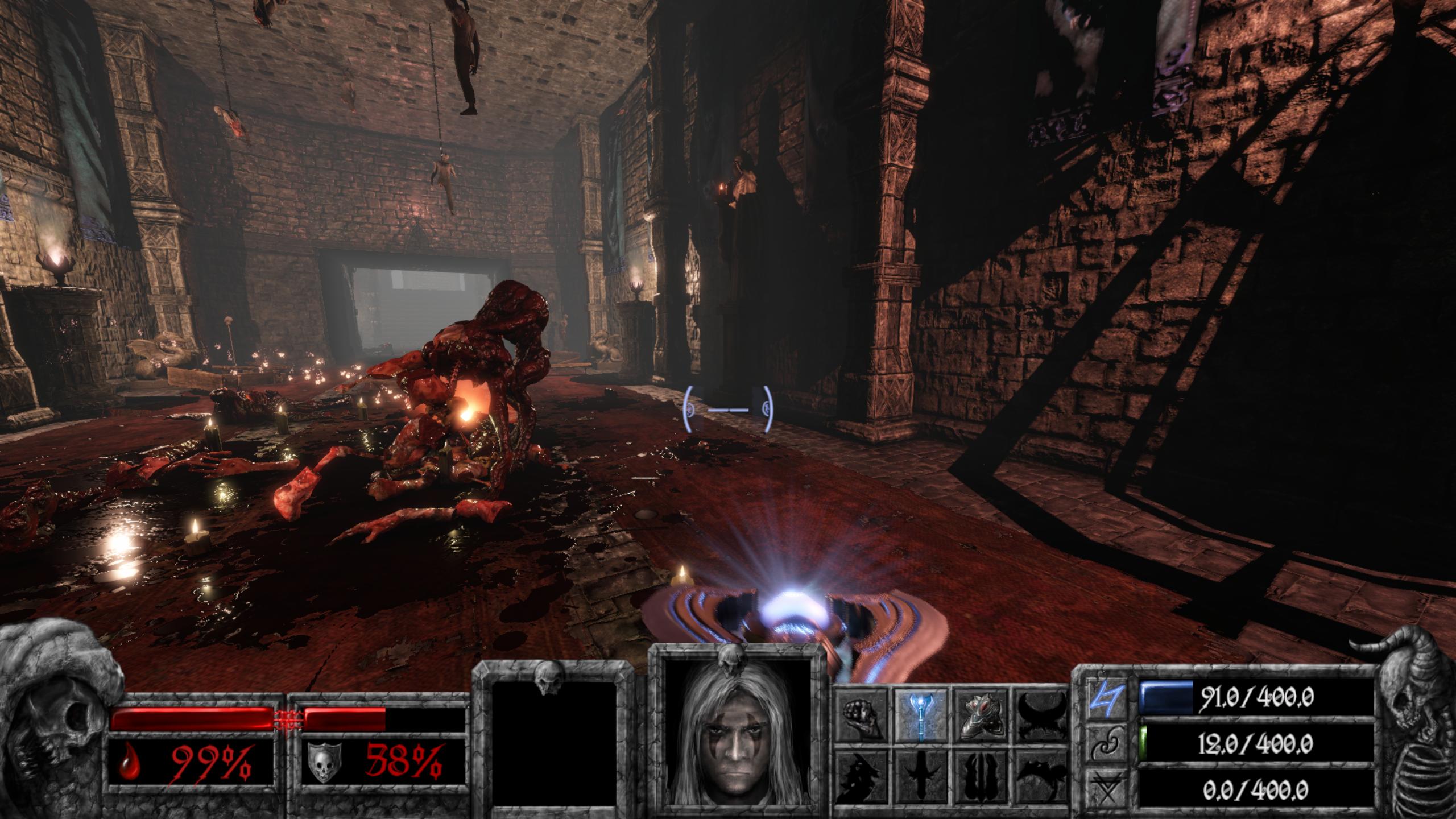 When one demon corpse loves another very much, magic can happen.

At the start of the alpha all he’s got is a pair of spiked gauntlets, which is fine for hammering on a few skeletons and the small number of fireball-shooting shamblers between level start and the first staff.  The staff does the bulk of the killing in the alpha, but ammo isn’t unlimited so sometimes it’s best to clear out a room of skeletons with punches and the occasional kick to get a bit of breathing room.  The staff uses blue mana to fire three bolts at once, one big center shot and two smaller angled ones, and if you’re close enough to land all three bolts you’ll frequently get a moment of slow-mo as the enemy gets torn apart. With a little exploring you can turn up a second ranged weapon in the form of a pair of gauntlets firing a single fast green energy-ball apiece, but mana for that one is scarce so it’s best saved for enemies that need to die quickly.  There are also pickups kicking around in the form of magical grenades plus a health pack, so even though combat options are limited to what you could find in the single opening level they offer some good options towards crowd control.  While you can blast through standard difficulty without needing too much technique, once you bump up the challenge you’ll need to be a little smarter about fighting as the enemies are not only a bit tougher but come in larger numbers with tougher monsters added to the crowd.

The Apocryph alpha is free to anyone who wants to check it out, available directly from the developer’s web site.  While it’s a bit short at a single level, it shows all the touches you’d hope to see in something inspired by classic ’90s FPSes.  Monsters are dumb and charge straight at you unless one hits another, at which point they start fighting.  The entire game is hand-designed, no roguelike anywhere, making for nicely intricate, nonlinear levels.  Collect a large pickup and you’re likely to open a monster closet, which for some reason used to be considered bad game design.  There’s even at least one secret door (maybe two?) you’ll need to look carefully for or just ride the walls hitting the Open key to see what you can find.  Check out the trailer below to see it in action if you want a look at what’s in store before trying the alpha and see if that laugh in the first second of the video doesn’t bring back the memory of Heretic.