Life Is Strange voice actors Hannah Telle and Ashly Burch are set to reprise their roles for Life Is Strange: Before the Storm’s bonus episode, Farewell, developer Deck Nine has revealed.

Telle and Burch, who voiced Max Caulfield and Chloe Price respectively in Dontnod Entertainment’s Life Is Strange, featured in a brand-new behind-the-scenes video for Farewell (posted below), as they shared their excitement to return for Before the Storm.

Burch has been working on Before the Storm as a writing consultant, having been unable to play the role of Chloe due to the SAG-AFTRA strike. However, the year-long strike for voice actors ended back in September. 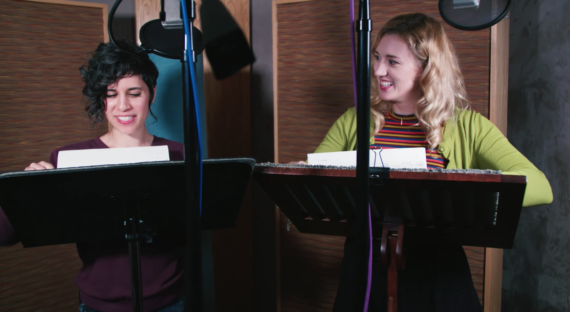 Ashly Burch [left] and Hannah Telle [right] in the recording studio for Life Is Strange: Before the Storm.

Posting news of the announcement on the Life Is Strange Tumblr, Deck Nine praised actor Rhianna DeVries for taking on the motion capture and voice-acting duties for Chloe in Before the Storm.

“Rhianna DeVries has done a fantastic job for the voice and motion capture of 16-year-old Chloe so far, bringing a little bit of herself to the role, just as Ashly had in the previous game,” Deck Nine said.

“We are forever thankful to Rhianna for the work she has put into Before the Storm and she will continue to work with us for the motion capture of young Chloe in Farewell.”

Farewell is an exclusive episode for those who have purchased Before the Storm Deluxe Edition. Players will take control of a younger Max for the episode, with Deck Nine suggesting that it “may very well be the last time that you will get to see Max and Chloe together!”

“Unfortunately, as much as we’d like to, we can’t say much more about it just now as the team is focused on completing the final stages of polish for Episode Three [Hell Is Empty], the finale of Before the Storm,” Deck Nine added.

Farewell is expected to release in 2018, according to the behind-the-scenes video.

Before the Storm, which is a three-episode prequel to Life Is Strange, is available as a digital download on PlayStation 4, Xbox One and PC. It launched with Episode 1: Awake’s release in August, with Episode 2: Brave New World following in October.

“It’s an emotional roller coaster from beginning to end and an experience that will leave you with questions answered and tears in your eyes. Anyone who enjoyed the first episode, or even the original game, will love it,” he added.

You can also learn more about Hardcore Gamer’s thoughts on Episode 1: Awake in our review.

For more on Life Is Strange and Before the Storm, check out our interviews with actors Katy Bentz, Kylie Brown and Hannah Telle.