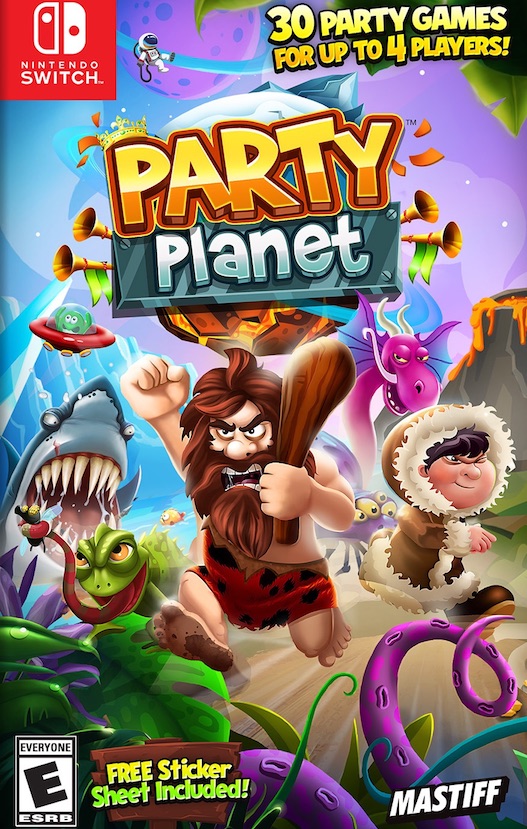 Since the N64, mini-game compilations have been a huge hit on Nintendo platforms. While the genre gained popularity with Mario Party, it hasn’t stopped many other companies from trying to create games that sought to create local multiplayer hits. Sega had Sega Shuffle, while Namco had Pac-Man Party and Vivendi Universal had Crash Bash. Most of these concepts were derivative of what Nitnendo did, but put their own spin on the mini-game collection. With the Switch not only being multiplayer-friendly by giving you two controllers right away but also being portable, this concept fits the device like a glove. 1-2 Switch was great for two players, but didn’t offer much for three or more people. Enter Party Planet, a mini-game collection of sorts, but one that goes for more of a collection of games “inspired by” others instead of original works.

The end result is something of a mish-mash because the games here are well-executed and usually fun to play — but the final product is hurt by so many of the experiences being replicated elsewhere. Sometimes, the novelty of having the game on the Switch is enough to make it work. Alien Balloonists is a knock-off of Balloon Fight — which in and of itself ripped off Joust. So you get a twice-removed ripoff, but one that does feature solid gameplay, whether you’re using Joy-Cons with the grip, a pro controller or even a single Joy-Con. Without an official version of either Joust or Balloon Fight to play on the Switch, this variant does fulfill that desire to a degree. It’s a shame there’s no Balloon Trip-style mode, but with the main game working far better in a multiplayer setting and this primarily being a multiplayer game, its absence makes sense.

There are over thirty games advertised, but the catch is that many of them are locked behind progression. The better an individual user does, the better the game selection will be. The default lineup includes solid games like Alien Baloonists and Fennec Fox Tower. FFT is a platformer and one of the few here, but a perfect pick up and play game. It’s a vertical platformer that sees the bottom come up — so you have to quickly scale the platforms to ascend and grab goodies while also making sure to time your jumps so you can properly hit moving platforms. The game plays with convention a bit too, because while in most games you want to collect everything, doing so here can be disastrous. Grabbing what may appear to be a power-up actually nets you power-downs, including cracking the platforms and even making the platforms smaller. FFT is a surprisingly enjoyable game and having obstacles like snowballs hurled at you stealing victory from your grasp is genuinely disappointing — so this winds up being a true highlight for the collection. 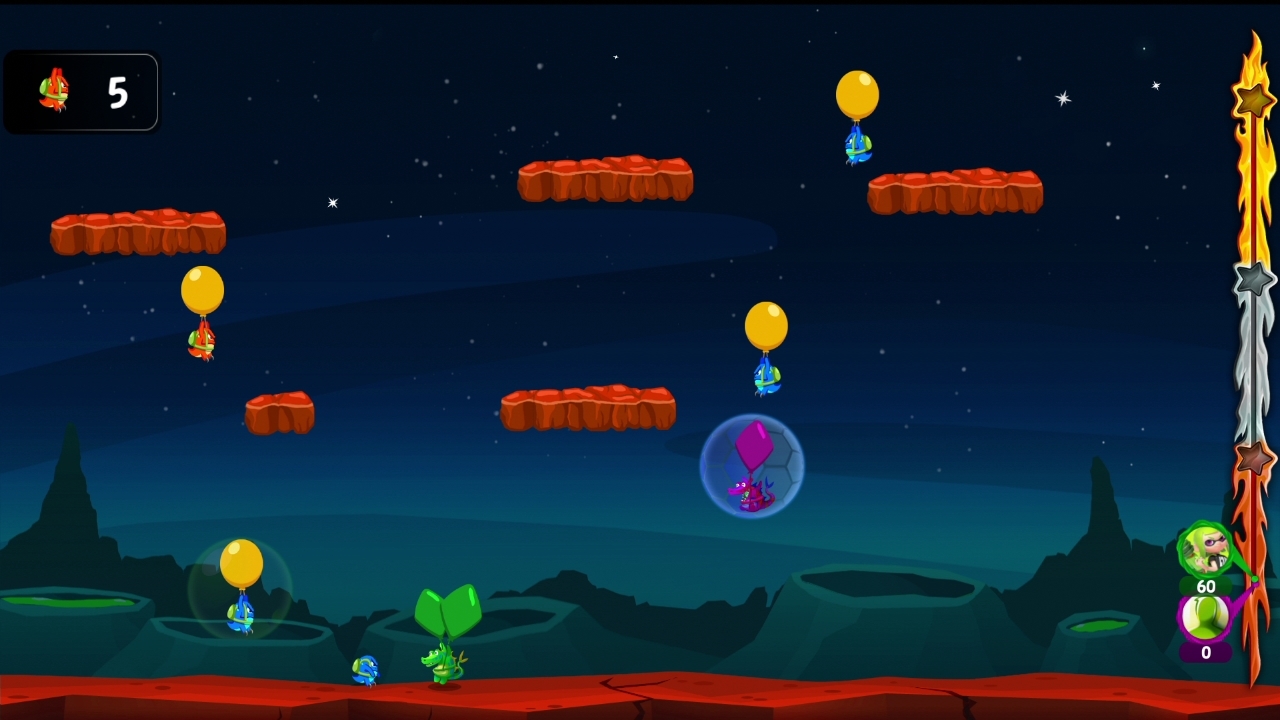 Another big one is Jellify Pufferfish. This oddly-named title has you move a little pufferfish around and collect little green orbs. These orbs can transform into enemies at the last second if you don’t get them fast enough, adding a sense of urgency to everything. You also have to worry about a large killer fish coming your way, so you need to avoid that while also making sure to not hit any transformed enemies as everything is a one-hit kill. It’s fun to figure out the best route for each session and it can be a tough challenge, but a rewarding one since it’s a fun experience even if it isn’t a particularly deep one.

Super Vegan Anaconda is basically Snake, but with a non-meat eating theme to it and is one of the more replayable games offered up. Frosty Hockey is an overhead air hockey game and is a blast to play with a small group of people. Playing it in a break room in lieu of an actual hair hockey table works well at accomplishing the same sense of joy and anger as you just barely miss a shot only to have a shot backfire and cost you the game. The version featured here is a no-frills affair, with minor fanfare for successful shots, but when you have something crafted with multiplayer in mind, sometimes just having the thrill of victory to bask in while a friend is dismayed is enough.

A platformer with a unique gimmick attached to it, Hopper Jump is one of the more addictive games in the package. You have to avoid the water and jump with one button for one space and another for two — so any gaps can be filled in with the two-jump button and you can also make faster progress with the two-jump button. You will have to use the single-jump button, however, in order to avoid making mistakes and hitting the water and losing precious time. You can regain small pockets of time with stop watches, but they aren’t common drops and this is easily the greatest efficiency test in the game — as well as one of the most fun games in it. 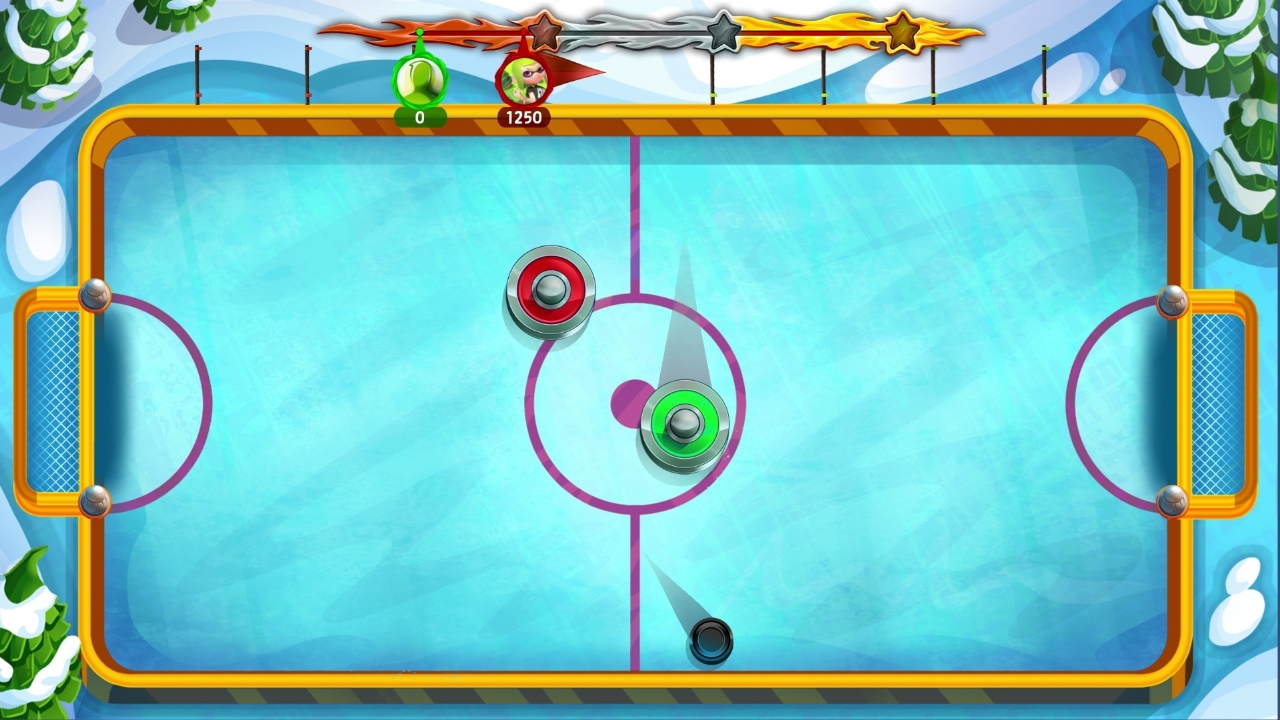 When it comes to unlocking things quickly, the best bet is to go with things that advance the bronze, silver and gold meter quickly. Frosty Hockey is an easy game to score golds in quickly since it only lasts a few rounds, while Fennec Fox Tower is a breeze to get all-golds in if you’re patient and at all aware of your surroundings. Jellify Pufferish can be a quick one to get a gold in — but it’s harder to do it there than in FFT. Super Vegan Anaconda is tougher, but does advance quickly and is an easy game to do well in. One great thing about this being a party game is that if you have a smaller group who likes to unlock stuff, you can find one person who is better at a particular game and just have them grind through to quickly unlock a few things.

Visually, Party Planet‘s games give off a Flash game-style to them. Nothing here appears too complex and that does hurt the overall presentation as any animation is limited. The game does, however, have a vibrant color scheme and each mini-game looks distinct to a degree. The music, however, is a generic affair of happy-sounding tunes that leaves your mind the second it enters your ears and doesn’t do the game any favors. Hopper Jump has an amusing country-twang song that is somewhat memorable, but still isn’t very good. The sound effect work isn’t remarkable either, and even things like Alien Balloonists that should have consistent sound effects don’t — so you can easily pop a balloon and hear nothing, while things like the balloon-popping and lighting flashes in it have no real impact. 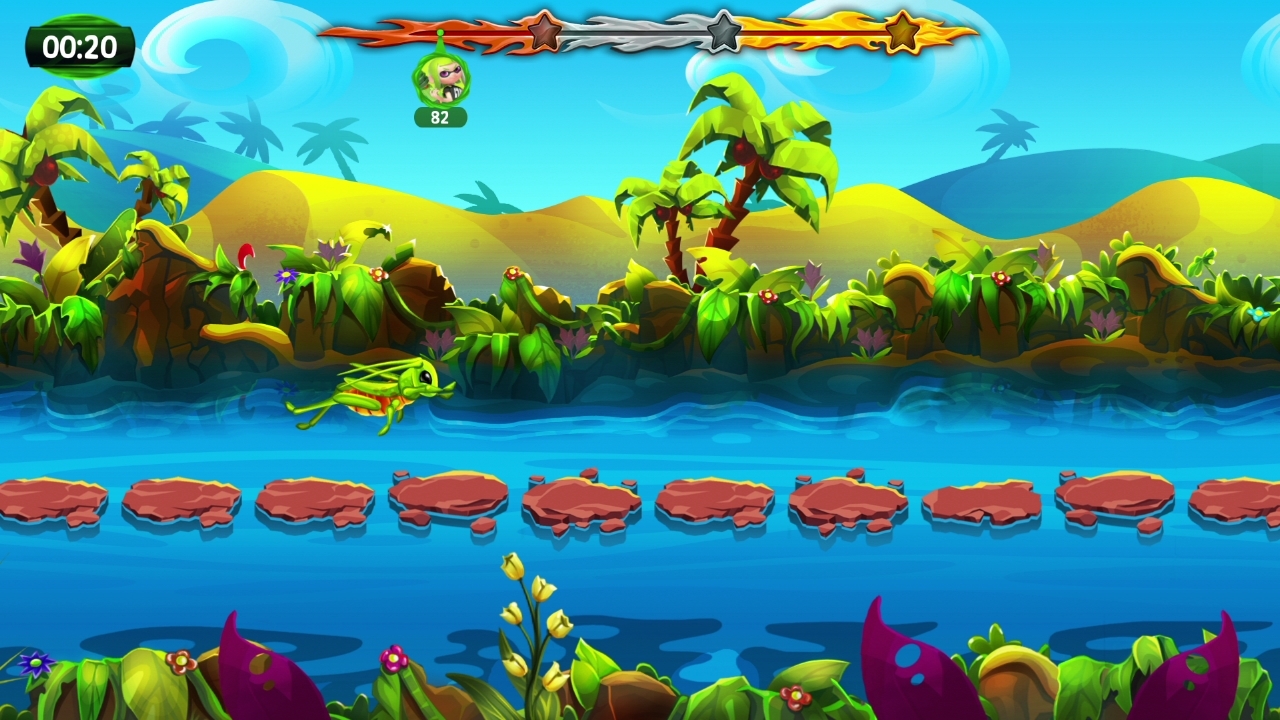 Party Planet succeeds at offering a lot of variety in one package, but the quality of the games wildly varies.  While many are good — but also derivative of other games — others simply aren’t worth playing often due to a limited concept. Still, if you’re looking for a product to please not only yourself, but a group of friends either casually or at work, this will do the trick. In fact, it’s better-served as a break room game due to the super-short nature of some of the games. While some of the games support up to four players — each with their own Joy-Con — having them all playable with a single Joy-Con is impressive and ensures that, at worst, folks just have to take turns in a larger setting to enjoy the games.