The world is disappearing and a young boy named Kanata sets off on an adventure with his friends to restore his hometown of Elgarthe using the power of memory. People, buildings, entire cities and more are being consumed by a mysterious white fog and it’s up to this motley crew to return that which has been lost before it disappears completely. Lost Sphear, a classic-style, turn-based JRPG, will be hitting the PS4, Switch and PC on January 23. With a bit of luck, it will be an unforgettable journey.

Tokyo RPG Factory, the studio behind Lost Sphear and 2016’s I Am Setsuna, was built from the ground up by Square Enix in 2014 with the sole intention of crafting games similar to what Squaresoft made in the 1990s. Just like I Am Setsuna before it, the DNA from games like Final Fantasy VI and Chrono Trigger permeate Lost Sphear. It’s being labeled as a spiritual successor to Setsuna and it’s not hard to see why – mistaking it as a direct sequel on first glance wouldn’t be out of the question.

Lost Sphear’s battle system looks to build upon what Setsuna did before it. It uses the Active Time Battle mechanics found in Super Nintendo Final Fantasy games, where enemies don’t wait for the player to choose their commands, and characters can only attack once a timed gauge is full. It also mimics Chrono Trigger’s battle system, where attacks effect player and enemy positions on the battle screen, and advantages or disadvantages occur based on the character’s relative position to enemies. Lost Sphear takes things just a step further, however, and gives the player a greater degree of control over spatial attacks by allowing them to aim an attack that travels in a line through enemies, or position a circular area-of-effect attack however they see fit. 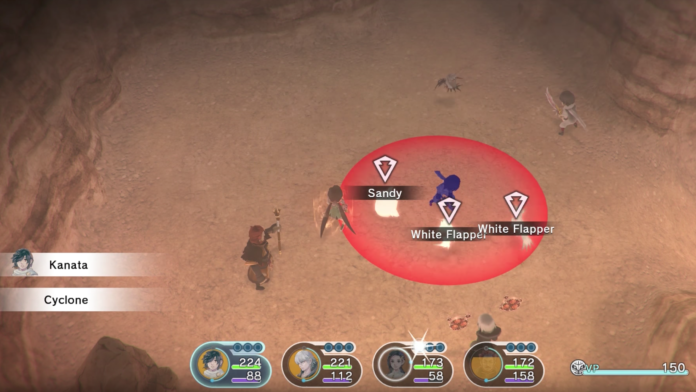 Though Lost Sphear clearly follows in Setsuna’s footsteps, Tokyo RPG Factory have made some definite strides towards correcting many faults that fans and critics found with their first game. Whereas nearly every location in I Am Setsuna was covered in snow, Lost Sphear’s locales are much more varied, sporting grassy fields, sprawling cityscapes, and playful sunny beaches. The difficulty has been adjusted as well, so that players don’t wind up pushing over enemies with little to no struggle throughout the campaign. Its musical score relies heavily upon the piano just as its predecessor did, but Lost Sphear introduces accompanying instruments to give the soundtrack a broader brush to paint with. Unfortunately, the game largely retains the clunky inventory system that Setsuna employed, making the selling and management of weapons far more archaic than any game made during this generation should be.

Lost Sphear puts a major emphasis on story, and it looks to differentiate itself from similar JRPGs through its intertwined gameplay and narrative elements. Kanata is a young self-taught swordsman, and begins his adventure with his friends Lumina and Locke. Lumina is reminiscent of Final Fantasy VII’s Tifa, using her martial arts skills and a fun-loving personality to make her way through the journey ahead, and Locke – who bears one of the main characters from Final Fantasy VI’s name right – is a young crafter and user of ranged weapons. Other characters join the party as the story progresses, like the mysterious Van who wields magic and technology in tandem, or the older mage Obaro, who returns to existence the moment Kanata’s powers of memory manifest. The world of Lost Sphear is said to have been created by the moon, which itself appears to be intrinsically linked to the white fog phenomenon that ignites the plot.

The larger parts of the world that become lost, that are shrouded by a white fog, can only be returned to existence by Kanata through major battles. However, smaller objects like boulders that block the party’s path can also become lost. In order to restore these, Kanata must use memories, which operate as items gained from common enemy encounters. The party must then destroy the restored objects using the game’s formula twist: Vulcosuits. Similar in design to Magiteck armor from Final Fantasy VI, each party member can pilot these ancient machines both inside and outside of battle. They run on Vulco Points (VP) and drastically improve the stats and abilities of party members while worn. VP runs out fast, though, and even if it can be slowly restored after battles or quickly refilled with potions, it’s a valuable commodity that will help players power through difficult battles. 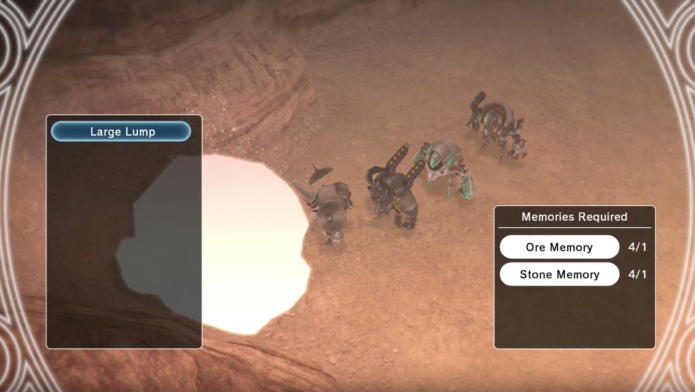 Like Square games of old, Lost Sphear has already received a Japanese release months ahead of the rest of the world. Unfortunately, it hasn’t fared well in its home territory, moving only 7,225 units in its first week – reportedly a mere twenty percent of its initial shipment. Its critical reception in Japan has been comparable to I Am Setsuna’s, but only time will tell if the game makes a bigger impact in other territories. If it does, expect Square Enix to keep Tokyo RPG Factory open for a third round. If not, well, perhaps the dream of Square Enix returning to turn-based RPGs in full force will fade away like a lost memory. Expect our full review of Lost Sphear in the weeks to come and keep an eye on Hardcore Gamer’s coverage of the game past its release on January 23, 2018.