1. Tomb of Amenemhat III: What we have here is a brain buster of a puzzle, at least by these tomb standards so it’s really not that tricky. Go into the tomb and travel until it looks like a dead end. Using the Animus Pulse will reveal several points of interest up in the ceiling, which should tell you to go up. Above a torch that can be lit there is an opening in the ceiling that Bayek must go through. Running around in the upper level will eventually lead Bayek to a room with two breakable trapdoors on the floor before an entrance to another room. In the next room there is a sealed door, with a warning on the wall that says not to break the seal or be consumed by the sands of time (this should be a familiar warning to those to enjoy adult beverages). Go back to the room with the trapdoors, break them, jump down and break the seals on the walls to release a small amount of sand that could possibly consume a field mouse if it were directly under the area the sand pours from the broken seal. The door with the warning is now open allowing Bayek to descend closer to those far away blinking inverted triangles. Beware as the next room contains some aggressive crocodiles, but thankfully there should be some lit torches nearby and a red oil barrel in the water. Why there is a crocodile pool inside a pyramid is beyond me, but I guess the dead want some security. The crocodiles are level 31, so this could be tricky unless you’re an appropriately high level. It’s recommend that Bayek kills all the crocs, though the less recommended option for low level players is to just hope they don’t kill him. From personal experience, it is possible to dive into the pool and swim past the crocodiles to the Ancient Tablet and survive even if Bayek is well below a high enough level to fight the crocodiles. Bayek needs to dive into the pool, swim around and look for the Ancient Tablet and a nice weapon to loot. After the Tablet is read just swim up through the opening above the Tablet and Bayek can wander on outside, once he climbs up a large sitting statue and moves an object blocking a doorway. 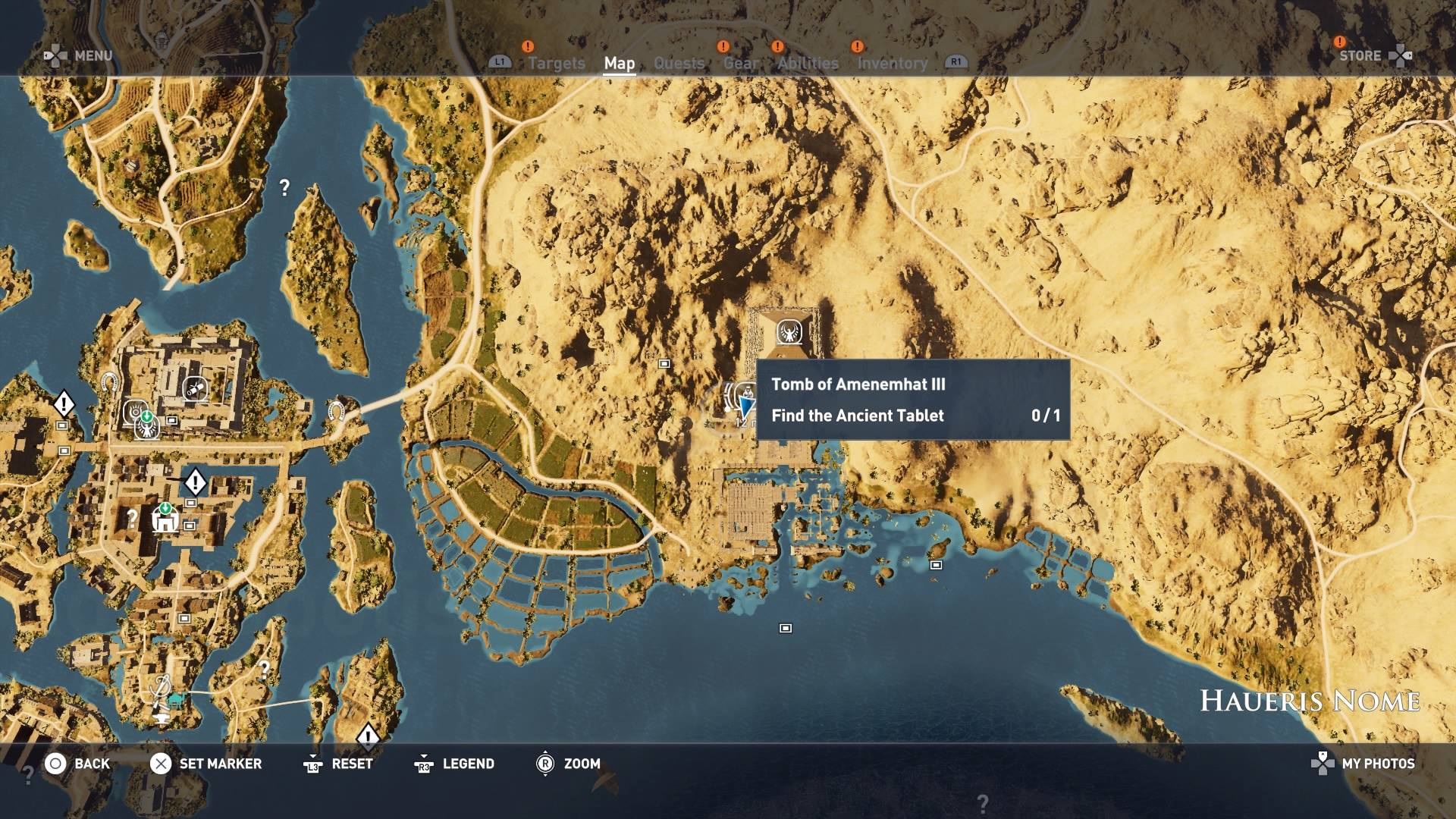 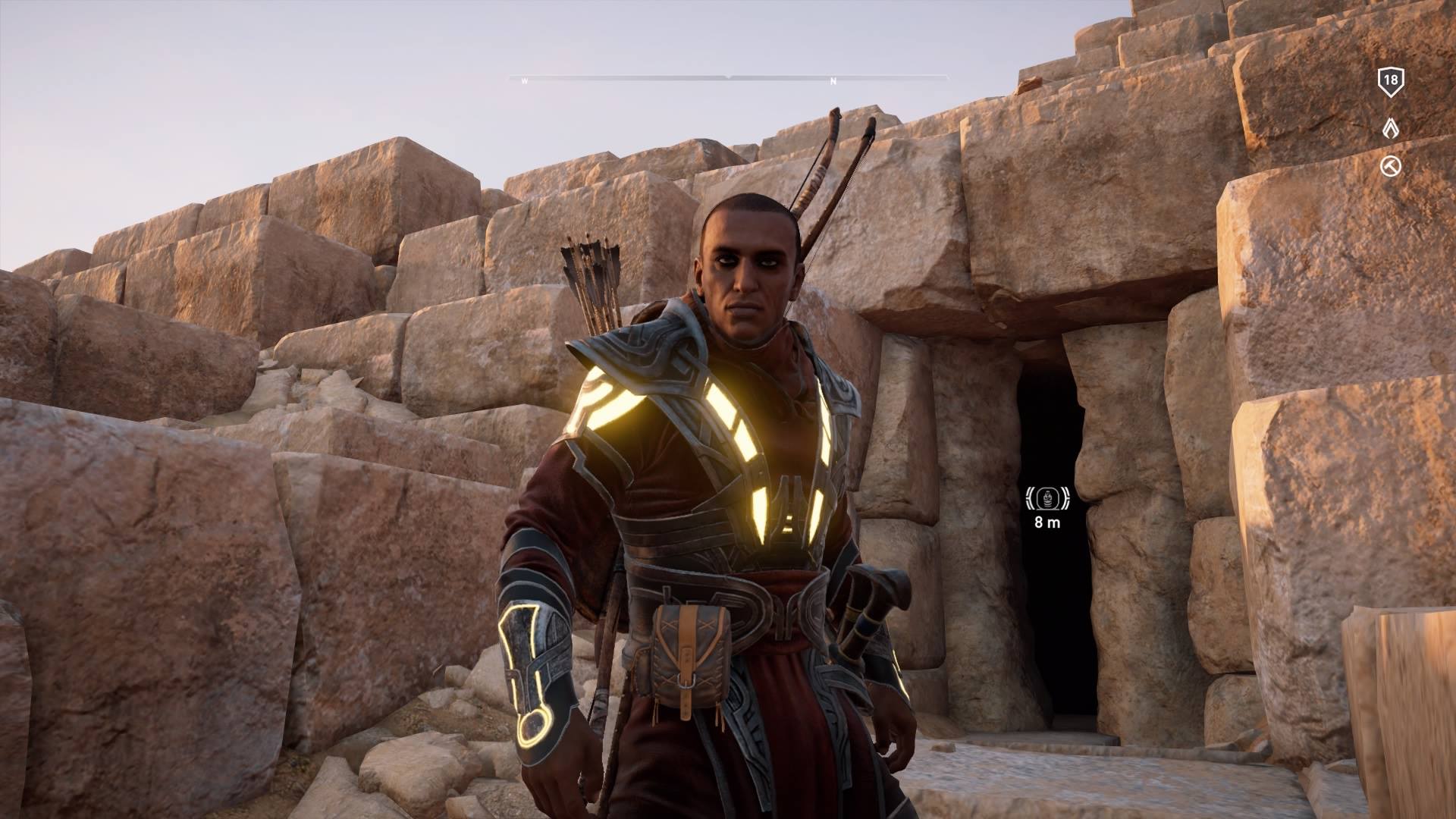 2. Tomb of Smenkhkare: Run up to the big opening in the floor and take a dive into the water, there are some treasures down here and Bayek might need to dive a couple times to find them all with the Animus Pules while rising for air. When Bayek is done treasure hunting underwater he can take either exit from the water into a large room with many pulleys. This room is a trial of speed and patience. In the back left there is a partial walkway up, go up and stand on the platform until it lowers all the way. Once it’s down run and jump the platform that is descending now that Bayek is off the other platform and use that to reach the ledge before it hits the bottom. Turn left and go to the platform, let it lower all the way and then run and jump to the hook that is hanging so that Bayek may swing and grab onto the descending platform and reach the ledge of raised floor with lit torches in front of a doorway. Go through the doorway and find the Ancient Tablet. Be warned there are level 30 guards inside, so either be the appropriate level to battle them or be prepared to quickly read the Tablet and hightail it out of there. 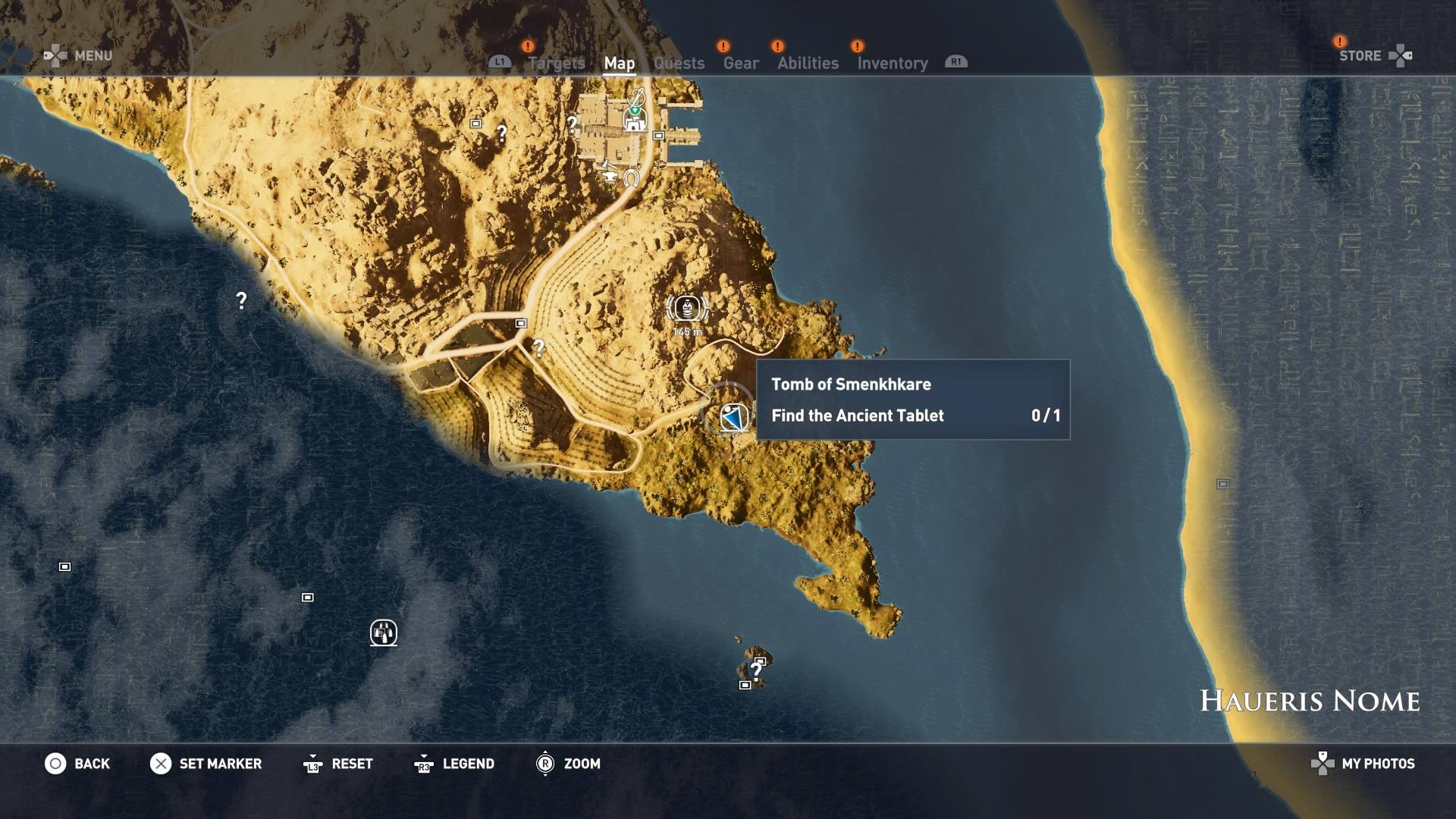 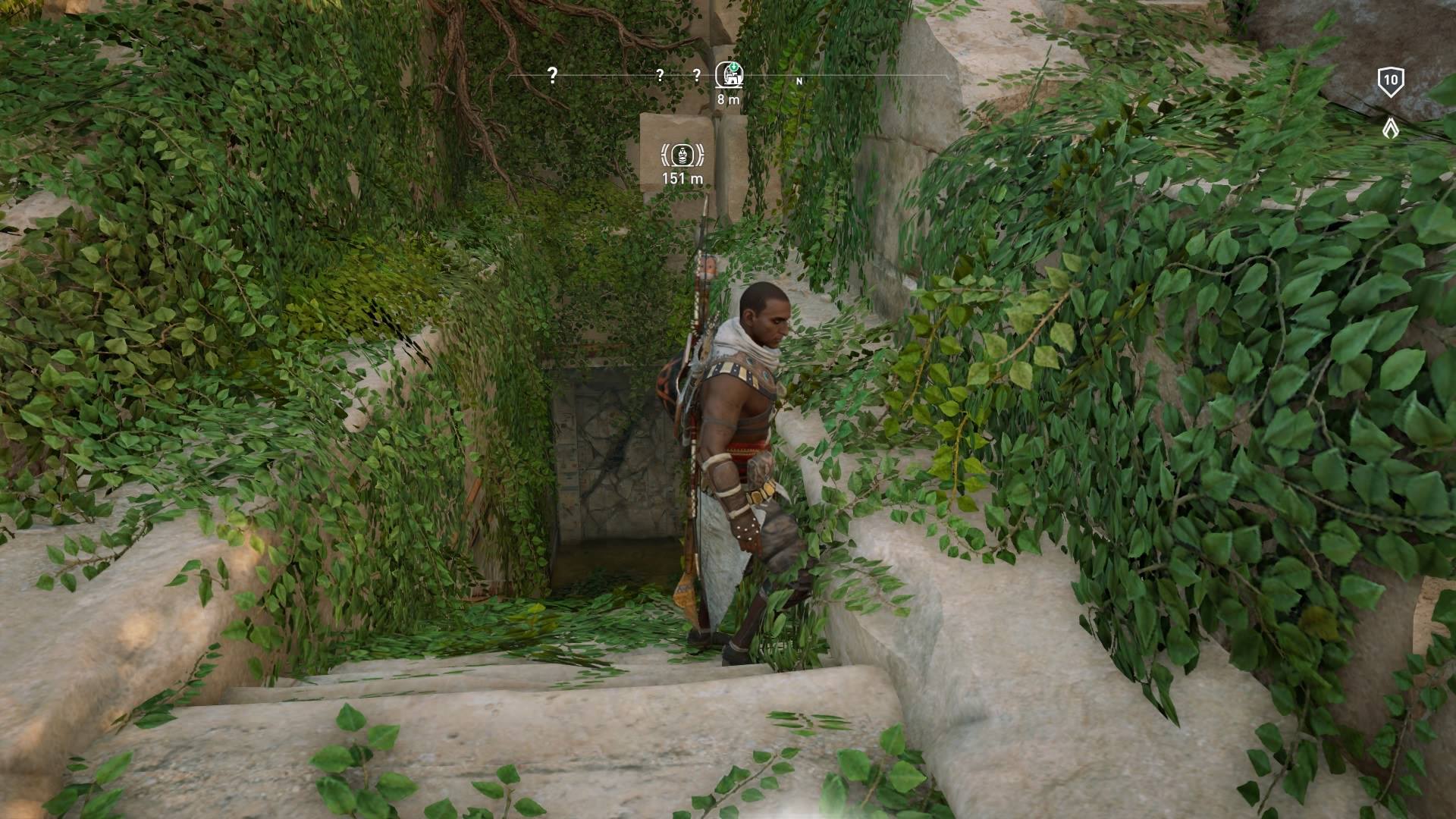 3. Eeyo Sekedoo Aat: After getting the ability point from the Ancient Tablet, squeeze through a narrow opening in the wall and run forward until Bayek takes a leap of faith into a pool of water. Look for the single submerged silica, then return to the surface. Like most tombs where the goal is to activate the Ancient Mechanism there is a lot of silica to collect in this area and the Ancient Mechanism virtually impossible to miss. Use five silica to activate it and listen to some reading machine with a feminine timbre talk about some chap named Desmond. 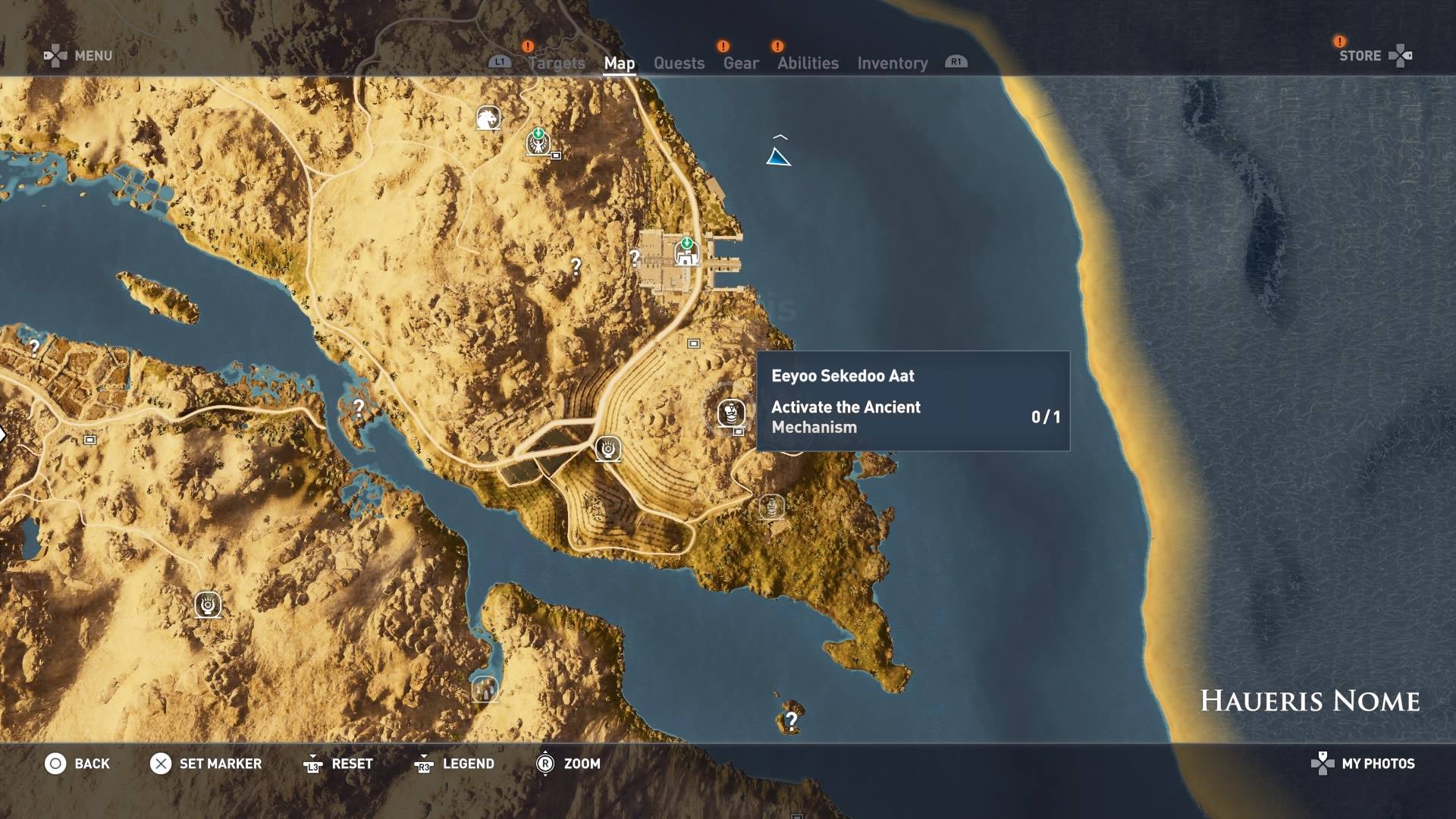