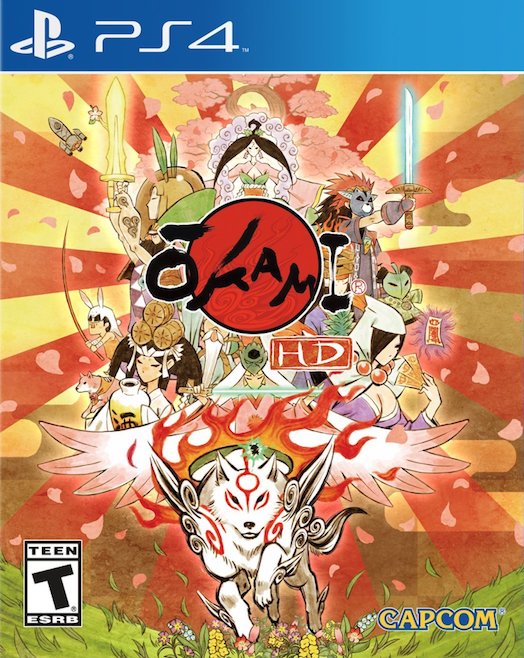 Before there was Platinum Games there was Clover, an offshoot of Capcom that made all the Viewtiful Joe games, the cult-classic God Hand and the utterly-fantastic Okami.  Okami was originally a PS2 exclusive and the Wii version helped keep the name alive until Okami HD came out on PS3.  That was nine years of being stuck on a single console at a time, but those dark days are over at last with a full widespread release of Okami HD on PC, PS4 and Xbox One.  While this review is for the PC version, it’s good to see Okami available on almost any platform that can support it.  There’s a reason it’s on its third re-release, after all.

Okami is the story of Ameterasu, a sun-goddess that’s taken the form of a white wolf, awoken one hundred years after her fight with the nine-headed demon Orochi.  While the demon was “killed” it wasn’t dead-dead so much as “locked away”-dead, sealed by the sword of the hero Nagi who’d fought alongside Ameterasu.  Except she was called Shiranui back then, because mythology is difficult.  When a thief steals the sword from the shrine Orochi promptly revives and plunges the land of Nippon into darkness and corruption.  The tree-goddess guarding the nearby village barely has enough strength left to revive Ameterasu, but once she’s up the wolf starts the long, difficult journey to free Nippon from Orochi’s darkness.

Even at the start Ameterasu is a powerful hero, able to mix speedy fighting moves with the abilities of the Celestial Brush.  While Okami is basically an action-RPG in the Zelda mold, its unique mechanic is being able to pause the action at any time to flatten the world and draw on it, using the strokes of the brush to effect both the environment and any enemies dumb enough to attack a full-fledged sun goddess.  (The sun is the source of all energy on earth, burns at millions of degrees at its core, and regularly burps out flares that would immolate the planet.  The Celestial Brush is probably a compromise so as to not to leave Nippon a radioactive crater.) 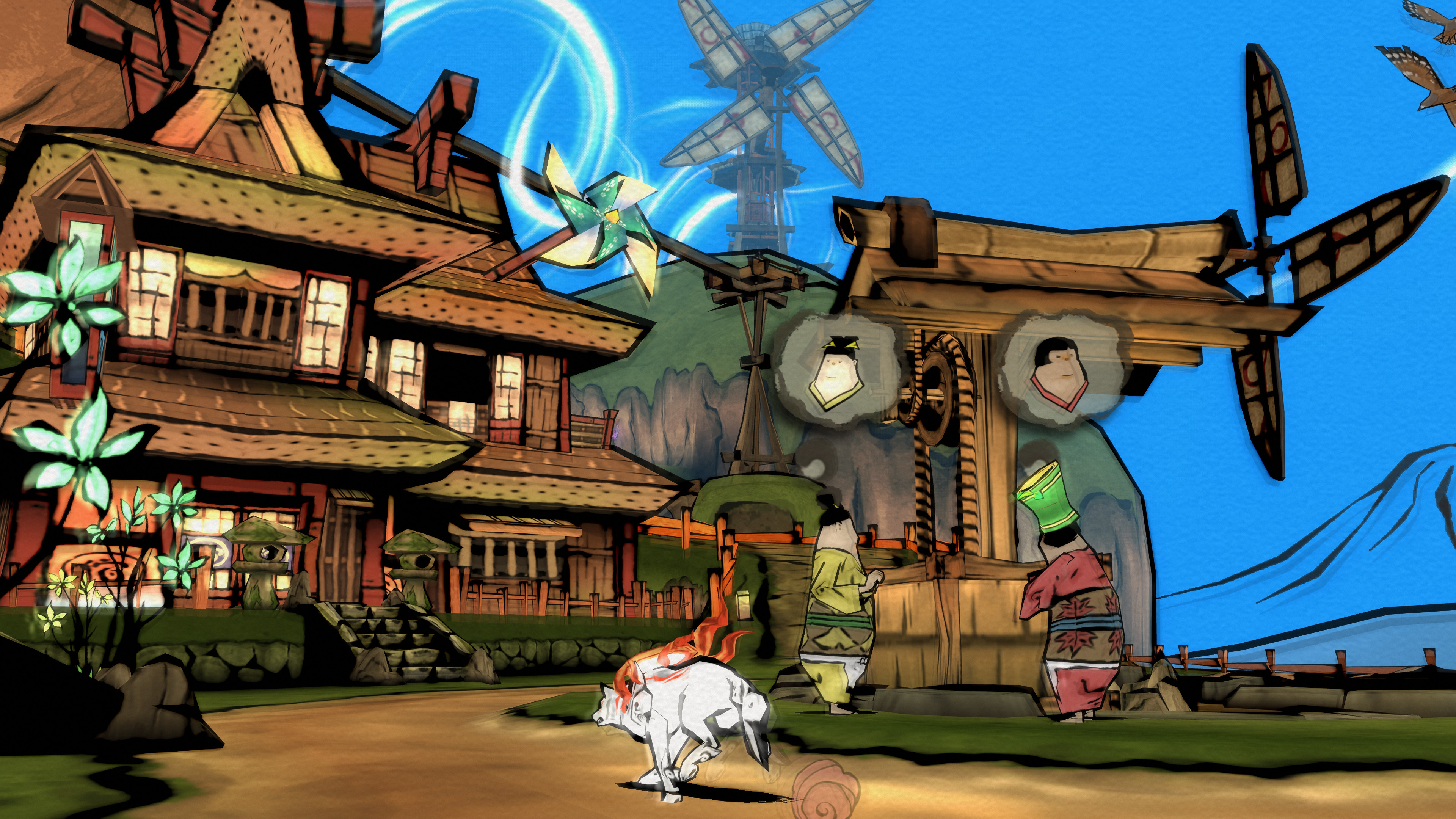 The brush was designed to be used with a controller, so the things you need to draw aren’t particularly complex.  Fixing a bridge just involves laying down a lot of ink between one side and another, while a simple circle in the sky calls out the sun.  A straight line is a slash, while later abilities involve drawing circles to make plants bloom, or grow giant lily pads in the water to stand on, and a circle with a line out of the top turns into a bomb.  It’s an incredibly flexible system that allows new skills to be as readily available as old ones without needing to worry about equipment.

Which isn’t to say there’s no inventory, of course.  Ameterasu starts with a Reflector, which is the disk she carries on her back, and it’s used to swipe at enemies in close range.  It doesn’t take too long to get more weapons, which can be used in the primary or secondary slot with different abilities depending on how they’re equipped.  The bashing Reflector turns into a shield in the second slot, for example, while the fast-hitting Rosary as a main weapons acts more like a bead-firing ranged weapon when used as secondary.  It takes a bit to earn more than just the starting weapon, but once you’ve got a few the combat possibilities open up, especially when mixed with the brush.  Each enemy has its own quirks and weaknesses as well, so learning to read the encounter and prioritize attacks, taking into account the current weapon abilities, makes for fights that are consistently fun to take on even if the enemy mix has gotten familiar. 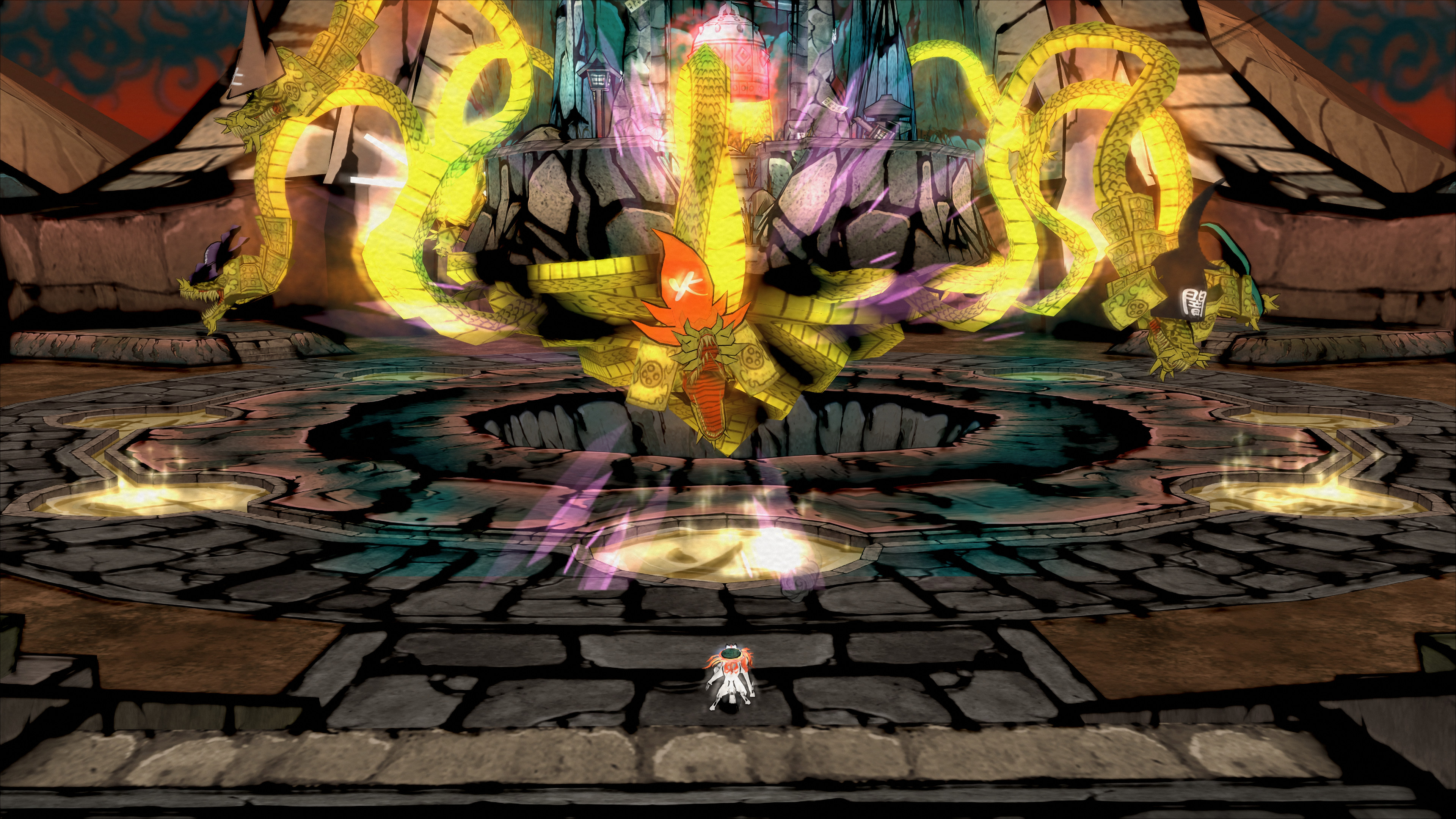 It takes a while to get anywhere in Okami, with each area having a number of small quests that require running all over the map.  The game actually seems like it’s going to be a mid-sized adventure to start with when it’s really just engaged in a slow burn.  The quest grows at a steady pace from its humble beginnings in a small town to an epic journey across the land of Nippon, with each new section of the world being a place with people, events, secrets, and other hidden goodies to track down.  Ameterasu’s abilities are just as useful out in the world as they are in combat, and there are plenty of strange characters running around the world needing the help they provide.  Whether it’s drawing a line between two sticks to use as a drying line for laundry, or helping a washed-up swordsman delude himself into thinking he’s a mighty hero by helping him slice through boulders too large for Ameterasu to deal with alone, there’s always someone needing a little divine assistance and part of the fun is how lively and energetic they all are.  A maor reason Okami is a small classic is the way it blends humor, beauty, action, and mythology together into a single seamless package.

A game doesn’t get to be a classic without the passage of time, though, and it’s been nine years since the original.   While Okami HD is the best version of the game yet, it’s still saddled with a handful of technical issues left over from the PS3 version.  The most notable is that the game runs at 30FPS which, while it didn’t bother me at all, is a deal breaker for some.  The level geometry is basically unchanged from the PS2 era, which means they’re a little small compared to current games, and the draw-in distance for non-essential details is a little closer than expected.  It’s nice to look across a valley and see the waterfall on the other side, but if there’s a treasure chest or animals, you’ll need to head on down to see them.  One major upgrade, however, is the ability for most text to be sped through.  Not all of it, unfortunately, but a good amount.  Okami can be chatty, and while it’s always worth reading, there’s not a game made yet that can’t be improved by text that doesn’t make you wait for it to scroll on by. 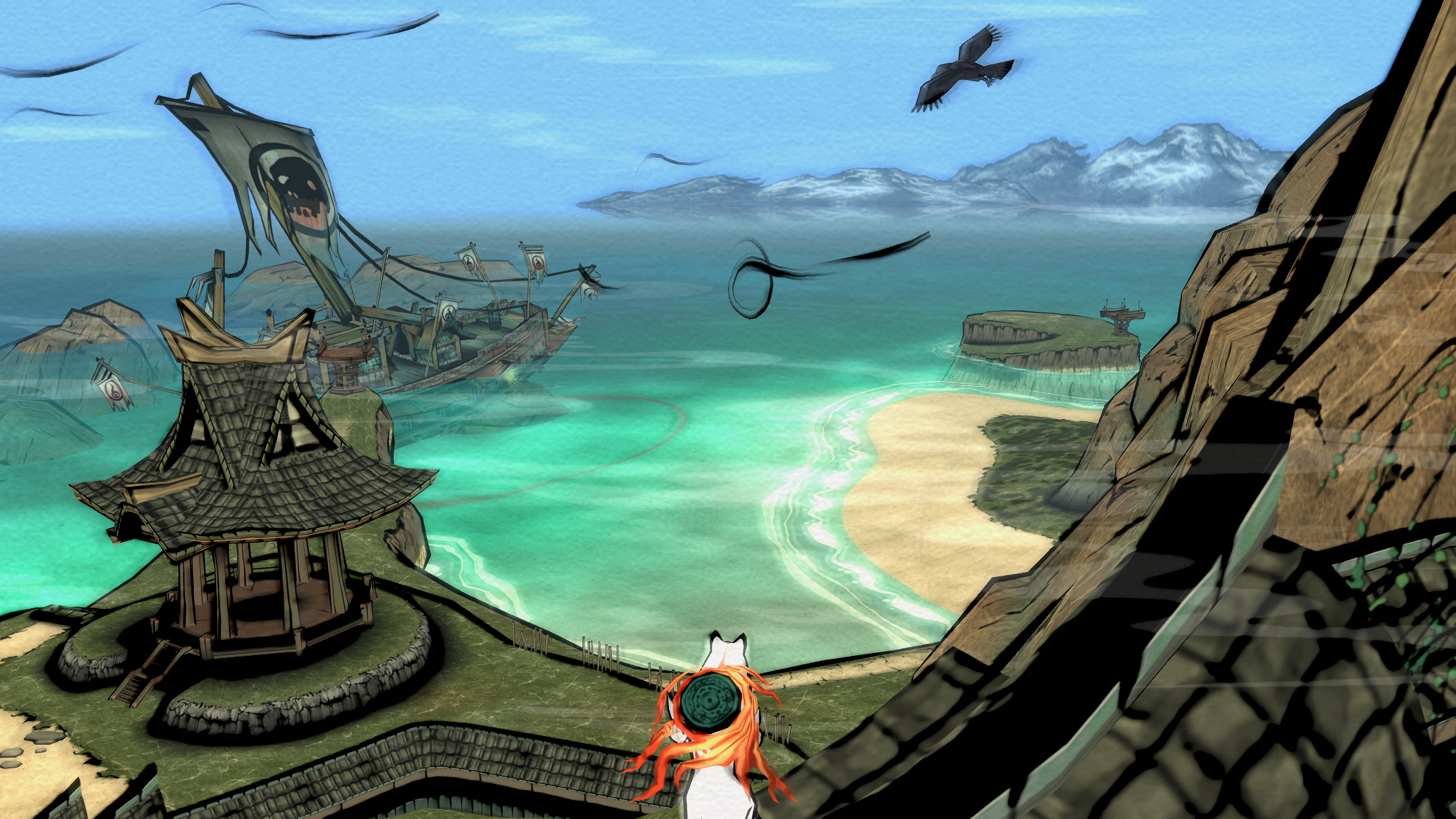 Okami was a high point of the PS2 era, fusing its action to an incredible art style that was years ahead of its time.  It takes a bit to get moving from the opening section, but every new area is packed with things to do with little wasted space to be found and it doesn’t seem to ever stop growing.  New areas bring new abilities that open up more options, both for solving puzzles in the world and taking out enemies, and there’s always something happening to pull you a little bit farther along the story.  Okami HD is close to being the perfect version of the original game, sharp and crisp and beautiful in a way we could only have dreamed of when it first came out.