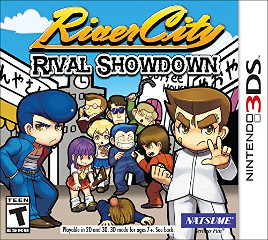 If an award was to be given to the game franchise whose graphics have changed the least in close to three decades, a strong contender would be Kunio-kun’s saga throughout River City, if not the winner. River City: Rival Showdown looks nicer than anything on a technical level than anything floating around on the NES, but the visuals proudly flaunt their 8-bit roots. This isn’t a bad thing by any means; any franchise that has been around since then and still producing new games has to be doing something right, but any time any retro flavored title comes out it needs to be examined to see if it brings enough excitement to the table to stand on its own merits or is it simply milking nostalgia to move units off the shelves.

The story of River City: Rival Showdown begins with Kunio getting jumped by some mysterious figures who turn out to be some super tough twins from Reiho Academy. The iconic theme from Double Dragon plays during this confrontation, and they fight with some impressive moves used by Bimmy and Jimmy in Double Dragon 3. Before a true victor can be determined the cops put an end to this brawl. This attack leaves Kunio confused, but apparently he has the reputation as the top delinquent at his school, and this duo from Reiho want to make a name for themselves by taking out the top dog, and Kunio has three days to train for the rematch in this beat ’em up brawler and RPG hybrid.

Given that Kunio is still a high school student (who notoriously never goes to class) the next three days are his between the hours of 3:00 PM until 11:00 PM, because all delinquents have to get home before curfew for a good night’s sleep. These days are Kunio’s to spend however the player sees fit, following a nonlinear progression. Kunio moves in an old school 2D plane which follows the map of River City on the bottom screen. The days are divided into day, evening and night and different events occur throughout the sun’s descent in the horizon. 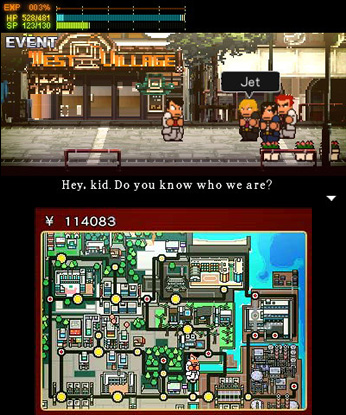 There isn’t a whole lot of direction given, but there really isn’t a need for much.  River City is small, so exploring the whole thing can be done in each day provided Kunio doesn’t lose many fights, which each “death” results in him restarting at the initial spawn point and advancing the clock one hour. Different stores sell clothing and accessories that boost his stats, food can be purchased to recover health during battle or Kunio can dine in, recover his health and pick up some stat boosts. There are story related events that can be triggered by talking to characters which are usually marked on the map or he can engage in street fights with either random thugs or story related fights. There are also a few secret activities hidden throughout town that can whittle away time and acquire even more bonuses.

The randomized nature of some of the encounters is a bit of a mixed bag. It does contribute to the replay value and fighting is more fun than wandering around talking to vapid NPCs, but the downside is it comes with completely random difficulty spikes. One screen could have Kunio duking it out with six individuals that he sends packing quickly, and the next screen can contain eight gangbangers that swarm around Kunio and knock him out with three good hits while taking one point of damage on anything Kunio can get in. This can be frustrating if this occurs near an event the player was trying to get to, since there is no fast travel and he doesn’t have the fastest walking speed. On occasion these gang swarms sometimes knock Kunio off screen, which results in the gang vacating the area when Kunio returns and any chance to beat them for experience points and money is lost. 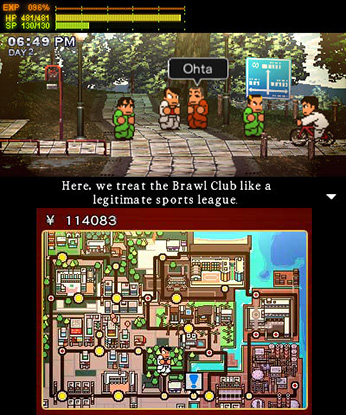 The gameplay is a straight up brawler, but with the RPG advancement system makes it more interesting and is essential for progression. For someone who is supposedly the top delinquent in his school, Kunio begins the game as a relative weakling compared to everyone else he encounters. Through beating other opponents he gets ability points to increase his attack and defense power. If Kunio is defeated in battle there is no game over, the exception being in the big showdown on day three. There is a good chance that during the initial playthrough Kunio won’t be strong enough to win this fight, but because of the New Game Plus feature Kunio can start over with all money, equipment, special moves and stat increases carried over. Depending on what all story events the player addresses there are multiple endings that can be unlocked, and restarting over with the same Kunio will allow him to progressively increase in strength making it easier to unlock each subsequent ending, plus making Kunio into a raging roid monster is fun. There is local multiplayer supported for both the story campaign and the Double Dragon Duel mode. Double Dragon Duel is basically what Street Fighter II would be if it was a River City spin off, and does have more than one nod to Double Dragon. Playing this mode on single player is not that great, but playing against another person is well, still not great as far as tournament fighters go but a lot more fun than trying to do that mode solo.

Despite having a nice coat of polish on the graphics, everything about the game clings to its 8-bit roots. The graphics are obvious from looking at the screenshots, or really any River City game’s screenshots. The music also sounds like an unearthed relic from the Paleozoic era, though the Double Dragon tunes are definitely a nice bonus. If you’ve played River City Ransom on the NES or the remake for the Game Boy Advance you know exactly how controlling River City: Rival Showdown feels. The controls are serviceable, but even though the old school simple inputs and response level is intentional it does feel dated and lacks the fluidity we have been spoiled with in more modern games. 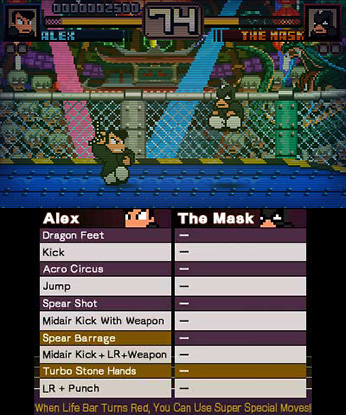 River City: Rival Showdown is a safe bet for those who enjoyed previous River City games. The three day time period translates to a roughly four or five hour game, but the brevity works in its favor since it can be replayed on New Game Plus for different endings. For those unfamiliar with River City, it’s a simple beat ’em up with an RPG equipment and stat progression system. It’s as old school as they come, but with quick pacing and a sense of humor, it’s a title any retro gamer should check out. Mainline River City games haven’t drastically changed their basic formula since their inception, but if they keep making them as fun as this title, they really don’t need to.