I’m just going to put this out there as if anyone who visits this site has any interest in my personality: I don’t love Christmas. I’m not part of the so-called “War on Christmas” as I’ve had this viewpoint long before that was even a phrase. I also respond to people wishing me “Merry Christmas” or “Happy Holidays” in a way that they would never guess how much I loathe this time of year. The reasons for my disdain for this most miserable time of the year are too many to length and not what’s important anyway. My opinion of Christmas is only relevant due to Wanda’s love of it. And her family’s love of it. And my family’s love it. And pretty much everyone we know loves it, but most importantly I hate it and Wanda loves it. We do agree on the classic Christmas movies like Bad Santa, A Christmas Story and Die Hard, but those aren’t enough to save the season.

So feeling like George Bailey and how this time of year would be so much better if I wasn’t part of it, I came to the realization that I’m looking for joy for the season in all the wrong places. Christmas isn’t about movies, as those haven’t done much to dissipate the misery that is my existence. Video games are the escapist fantasy where I can assume of the role of a beloved and celebrated hero whose actions matter. Sorry John McClane, ho ho hoing about your machine gun isn’t going to cut it this year, the gay apparel I’m donning in 2017 is strictly going to be of the purple variety.

Saints Row is an unlikely franchise to bring about holiday cheer, but Saints Row IV happens to have the How the Saints Saved Christmas expansion so much to Wanda’s delight we decided to fire up that little bit of holiday cheer. In a lot of ways I felt Saints Row IV was a step back for the franchise, especially with the expanded content. In concept I loved some of the ideas, especially Gat of Hell, but the execution didn’t quite recapture the glory days. Wanda likes Christmas, I like wanton destruction, so this seemed like something we could enjoy together. And surprisingly, I was actually right. 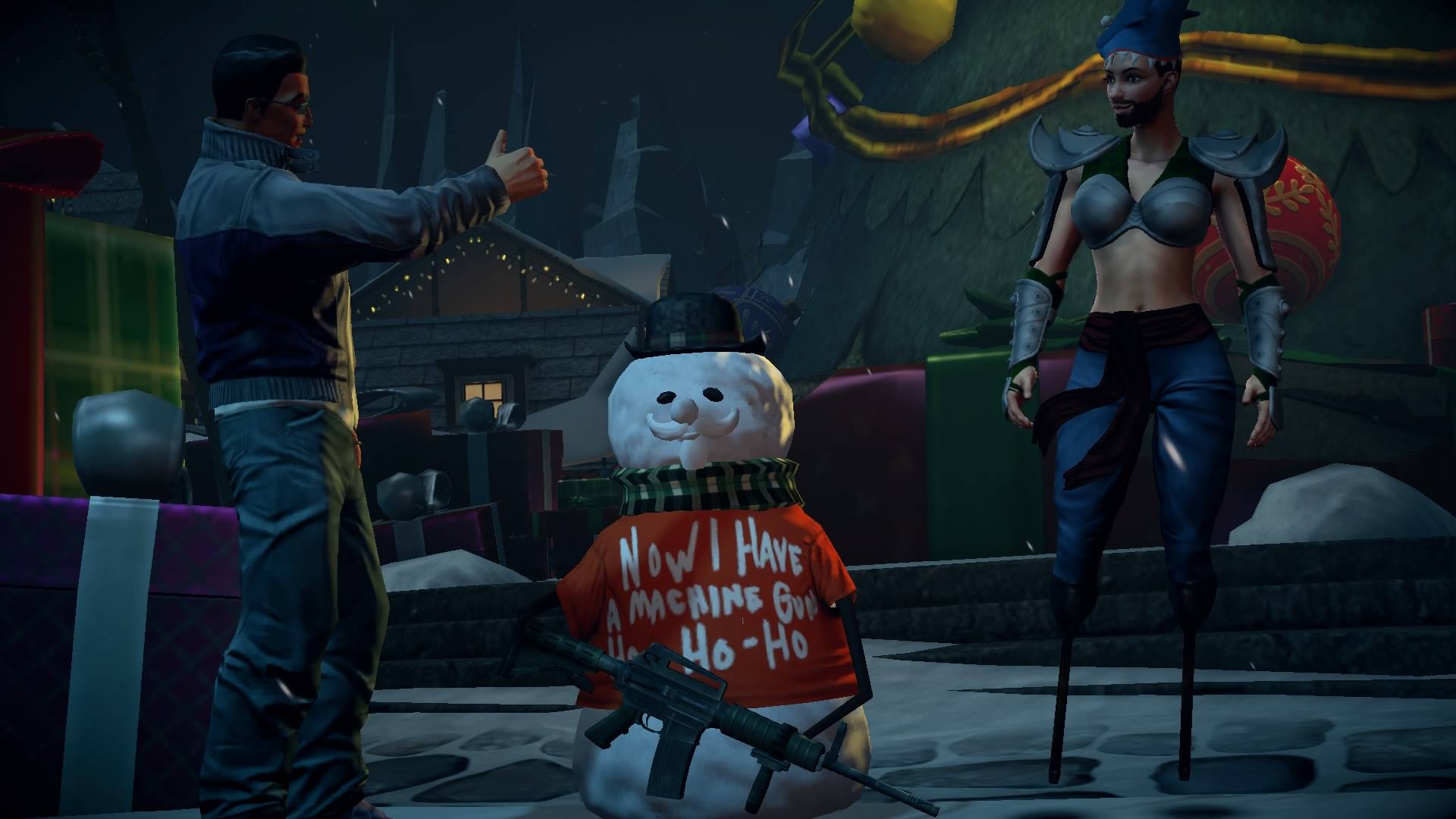 Saints Row IV is one of the most ridiculous games to come out in recent years and the Christmas-themed expansion doesn’t do anything to change that. The yuletide nonsense begins with a time traveling Shaundi warning the Saints that Santa Clawz has been captured by Zinyak and is being made evil, so its up to the world’s most powerful street gang to bring joy back to Christmas. By arming themselves with Ralphie’s coveted Crimson Cowboy BB gun and shooting giant living gingerbread men. This type of holiday hell raising is something I can get behind and go into maniacal laughter mowing down hostile gingerbread men while Wanda sits besides me, reevaluating her life choices.

Things in Saints Row just keep taking turns for the weirder. Santa Clawz has taken over the “real” Santa’s shop at the north pole and is planning to give the kids guns and bombs for Christmas instead of more age appropriate toys. After storming Santa’s Workshop, it somehow falls on the Saints to fly the high tech Santa Sleigh and deliver presents to everyone on the nice list and coal to everyone on the naughty. I’ve always wondered why Santa gives coal to bad kids. If I was Santa my approach would be taking a shovel to the reindeer stables, but I digress. Oddly enough, How the Saints Saved Christmas is a joyful holiday tale. It may have a bizarre plot involving brainwashing and conducting genetic experimentation on Santa and lots of violence, but the Saints restore holiday cheer by delivering presents and lighting up holiday decorations in the city, including some that recognize other winter holidays besides Christmas. Wanda and myself both approve of the progressive and inclusive views of the Saints and overall enjoyed How the Saints Saved Christmas. It could even become a new holiday tradition at our household. 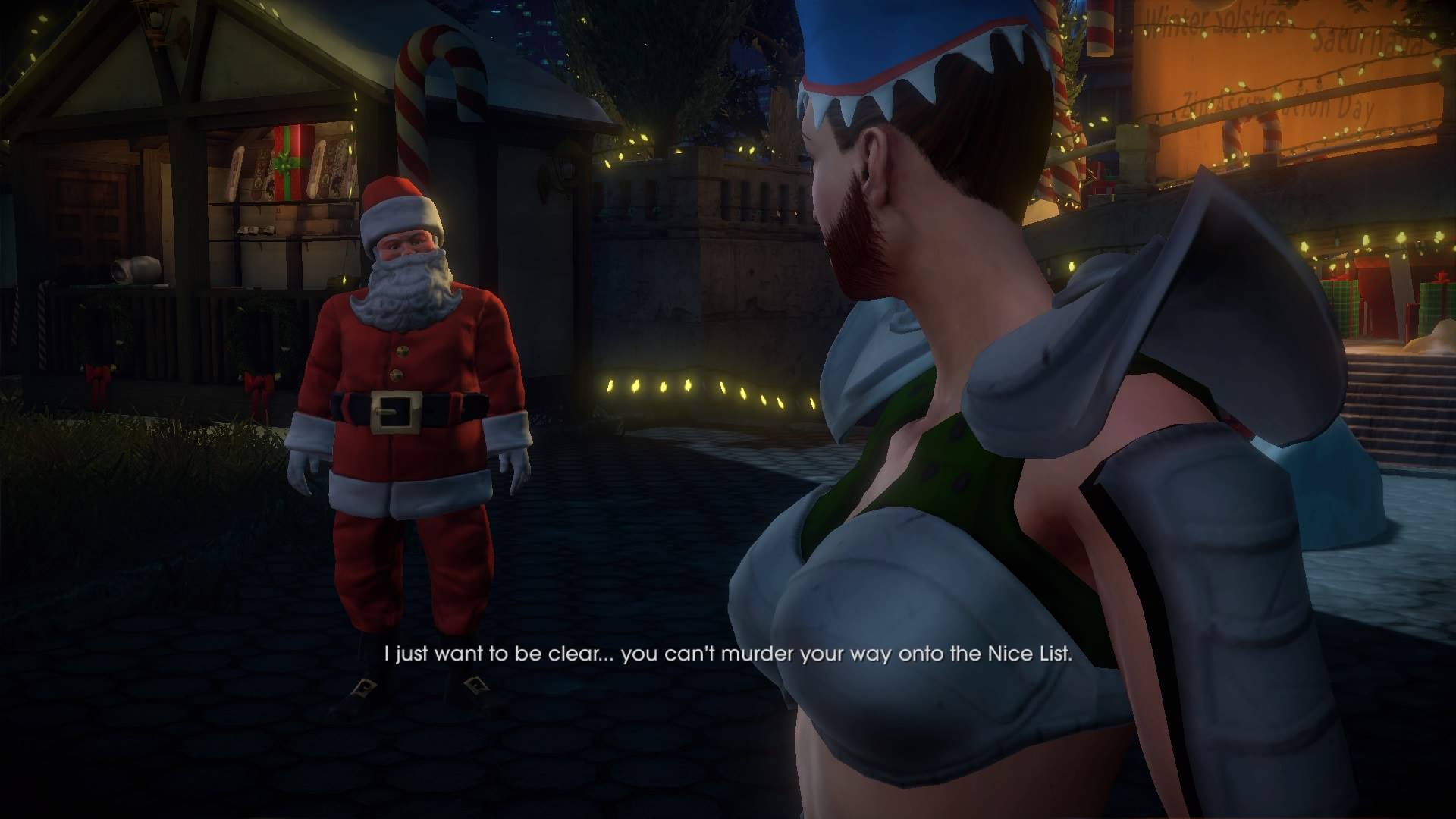 I don’t exactly have a collection of many Christmas games to pick from, but there are some nods to holiday in a few I have lying around. This involves going into the depths of the Crust Room and busting out Secret of Mana. Secret of Mana was a rather unique action RPG for the SNES. It consisted of a party of three characters and could access spells and inventory in real time by use of a wheel system. It also supported co-op play, something strange for an RPG of that era, and hidden inside of it there is its own Christmas themed mission. This was a perfect game for me and Wanda to play together.

Conveniently there just happened to be a save file in the ice country where some crimson nosed reindeer named Rudolf sends us on a quest to rescue Santa Claus. This mission itself is short but doesn’t need to be anything drawn out since its very existence is amusing enough. We just have to guide the party through a simple maze, hitting switches to open paths and killing Koopa Troopas armed with spears and some blue slime things. Eventually we get to the boss of this realm, a Frost Gigas who threatens to give us coal. The battle ensues and, spoiler alert, it turns out the Frost Gigas was Santa Claus all along. 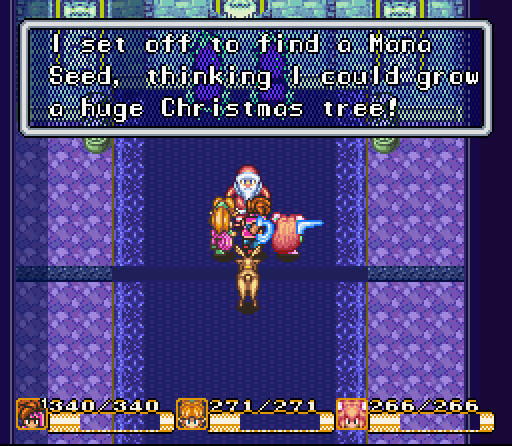 So this is where it gets really messed up. Santa turned into a monster because the kids stopped believing in him and tried to justify his actions with the excuse of when mana fades so do their hopes and dreams. In order to restore the holiday spirit, Santa took a mana seed to instantly grow a giant Christmas tree but instead turned into a roid raged Frost Gigas. I’m not really sure what the lesson is here. Believe in Santa, or he will turn into the incredible hulk? I guess a monstrous Santa coming to kill naughty children who question fairy tales really isn’t any more emotionally abusive than having them think a make believe person watches their every move, judging them constantly and bringing them presents or coal based on his evaluation of where they fit on the naughty and nice continuum, but this seems a bit excessive. Or maybe it’s an allegory for drug use. Santa is depressed so he turns to using seeds. Instead of addressing the problems himself, he goes for a quick solution that has disastrous consequences on his mind and body, literally transforming the jovial elf into a destructive murderous monster. We’re going to go with that, the anti-drug message because winners don’t use drugs. 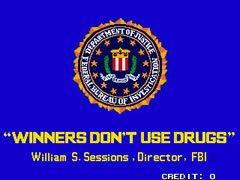