The mobile card game WWE SuperCard recently evolved into its fourth season. New seasons mean new cards and events as the game continues to evolve to keep fans playing. The free-to-play model also carries over past season cards that can be used to level newer season cards. With the holiday season here, some games incorporate the festivities and WWE SuperCard has done just that. Some WWE SuperStars have been given special holiday cards as the likes of Finn Balor, Natalya and even the Nature Boy himself Ric Flair are decked out in Christmas gear. These are some high-level cards and can be difficult to come by. While the game changes daily, it hasn’t been possible to just buy these on the in-game store.

The Fusion Chamber, which is used to collect specific cards to create a reward, is where Holiday Recipes are used to create greater rewards. All of this is aimed towards coming back to the game on a daily basis. Collecting candy canes, bells, snowballs and gingerbread can be fused for greater rewards and are the best way to achieve getting a Holiday card. Once the rewards are claimed, it takes time for them to appear. This can be sped up buy paying in-game currency. The tiered cards include Hardened, Ultimate and the new Titan class of cards. It will take some time to achieve the means to get the higher cards. Currently, the Holiday Recipes are sold in packs for 100 and 500 gold of in-game currency. 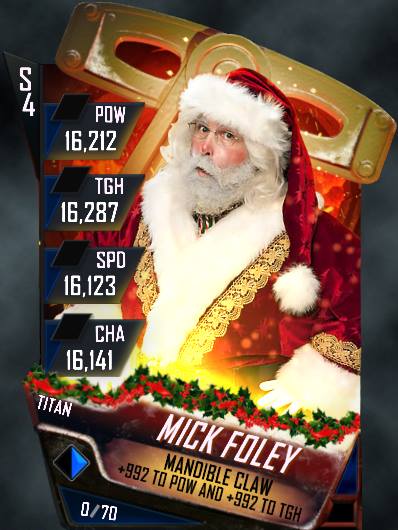 If you do decide to forego using the ingredients to fuse new cards, these cards offer a nice boost for leveling up current cards. To keep things fresh, the available games change daily. Ranging from Royal Rumble and War to the new Ring Domination and Women’s Only Elimination Chamber, there is strategy involved in these modes rather than just doing a straight-up one-on-one match. It seems much more difficult and time-consuming to take advantage of the Holiday Event in WWE Supercard due to the limited rewards. You’re more than welcome to dump money into speeding this process up and the option is certainly there, but it’s easier to use these to level up current cards than having to overly devote time and pay money to get the specific cards. WWE SuperCard is free for download on iOS and Android devices.