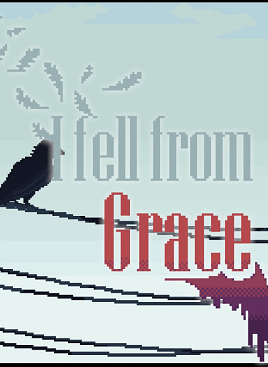 I fell from Grace

No one said life would be easy. In fact, life can be down right mean sometimes. For Henry, the anti-hero of I fell from Grace, life is hitting bottom, hard, with no hope of climbing back out. I fell from Grace is not looking to tell a happy tell; it’s one woven with sorrow after sorrow stacked upon itself. Bodies seem to pile up around Henry as if it might be going out of style. There is generally nothing happy about this game, it is truly the pits and any hope that might be found will quickly be squashed out only to be replaced by utter resentment and frustration, which I fell from Grace pushes above all else.

I fell from Grace opens with Henry having fallen asleep on the couch (again) and his wife Grace calling him upstairs. It’s revealed that Grace is terminally ill and does not have long to live. Luckily Henry works at a big fancy lab facility where many different researcher projects are going on, and just maybe, there’s something at work that might be able to help. Before even thinking about that, though, Henry shows his true colors telling Grace, like he has before, that he must get to work for fear of getting fired.

Henry is terrible. For a 2D pixel side-scroller, I fell from Grace makes disliking the main character as easy as ever. He is truly the worst — rude, narcissistic, unfaithful, untrustworthy, the list goes on. It’s one of the few things I fell from Grace gets right as characterization is pushed to extremes by mediocre writing that works in favor of blowing out personalities. Matched by language that is crude for the sake of it, with lines of dialog falling in place on the completely wrong beat. Getting pacing right is important for every story that has ever or ever will be told. I fell from Grace manages to fail at that, proceeding to light any semblance of structure on fire. After having played through it multiple times, in part due to narrative, I’m still battling with the story I fell from Grace is trying to tell. It’s easy to understand Grace is sick, but as I fell from Grace delves into the other ideas behind the game — such as the strange dreams Henry is having of two children guiding him in demonic ways — it becomes a convoluted mess with few graces to save it in-between. 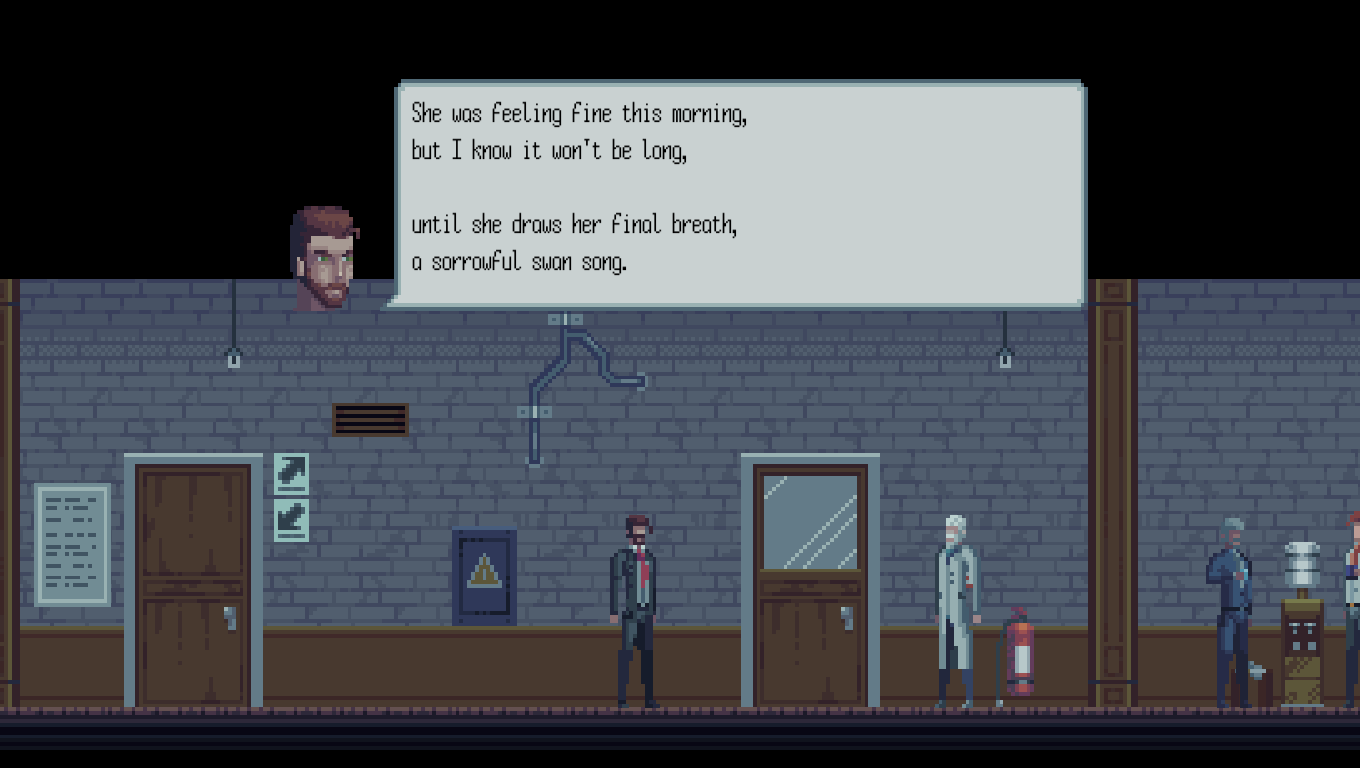 Those saving graces that keep this story afloat are in large part due to major plot sequences, like the children mentioned, but it’s unfortunate that they are entirely backed by other terrible plot devices. I fell from Grace seeks to bring down the player in whatever manner possible, whether it be crude language or extreme violence for the sake of it. It has a world littered with characters that don’t care for other’s or their own lives. Drugs run rampant, everyone drinks, businesses are closing and it rains every day. The only positive going for this world is the music encountered giving it the appropriate somber tones I fell from Grace wants to drag the player into. What a world. The characters are generally mean spirited with only a few sweet souls to offer respite from the onslaught of depression that I fell from Grace is.

The presentation of dialogue doesn’t help either. There’s a reason the dialogue is bad, as I fell from Grace is told entirely through poetry. While it’s an interesting idea, it comes across as someone taking an intro level 101 class with only the most basic grasp on poetry. The poetry structure resembling Narrative or Free Verse, with many rhymes not landing at all, feeling almost forced and some even repeating. I fell from Grace chose a bold dialogue choice, it just wasn’t executed properly. It’s hard not to wonder how I fell from Grace would have presented with standard dialogue structure; it might have suited the tone better, being able to tell a story without bogging the player down with half-hearted poetry. Amazingly, the poetry is there for a reason, and while it’s a clever reason, it’s not clever enough to warrant being involved.

I fell from Grace’s play structure is that of a side-scrolling puzzler with branching narrative choice (think Night in the Woods, but with more reaction to action). There are three major hubs in the game: Henry’s house, Downtown and Work. As Henry proceeds through each day he can freely move between the three, having to solve light item puzzles along the way. Things like scoring a huge bag of cocaine for the receptionist so she will give you the key card to the third floor. Yes, this is in I fell from Grace. While it might come off similar to GTA, do not think this, as these minor puzzles are annoying beyond belief. Each puzzle has little or no direction, the dialogue can be confusing and items have vague descriptions. Much of the time spent will be running back and forth between rooms pressing the E button trying to get items to interact with things in the environment. I fell from Grace manages to throw salt in the wound by smartly telling the player in the cruelest way that an item won’t work. Thanks, I fell from Grace. 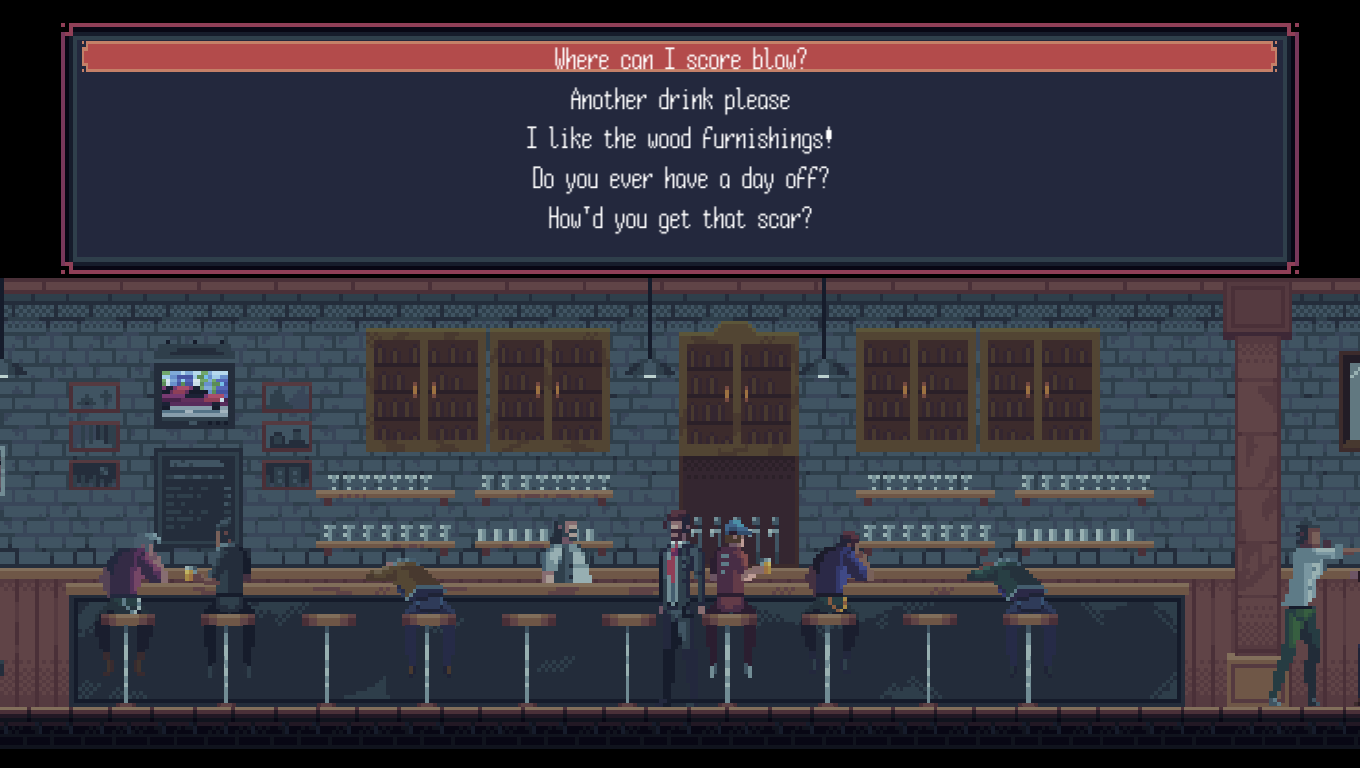 I fell from Grace wants to be something it’s not, with obvious pulls from certain media.  The poor dialogue gives way to poor pacing, which leads to confusion in story and puzzles, taking I fell from Grace from bad to awful. It presents itself with an attitude of being smarter than the player, while demanding attention for how much it knows. It wants to discuss the themes that ‘falling from grace’ represent, but is unable to get past its own ego which seeps from every area of the game. It’s a shame, because the ideas being presented are interesting. When aren’t angels, demons and shady laboratories of interest? That all sounds great, but when it’s executed with the crassness that I fell from Grace makes sure to show off, it becomes the mess of an adolescent mind that never had grace to begin with.