Playing as a caveman protagonist is a common thing to happen in video games. Just recently an entry in the Far Cry series had players assuming the role of a woolly mammoth hunting caveman in prehistoric times and that title drew heavy influence from the popular stone age duo of Joe and Mac the caveman ninjas. Actually, aside from both games taking place before recorded history, they really couldn’t be any more different, but we can speculate the Far Cry developers were fans based on no information indicating anything to that effect. Anyhow games taking place in this era are still considered a rarity, but Retro-Bit was able to scrape together three prehistoric adventures to package together in a new SNES game cart.

Joe & Mac: Ultimate Caveman Collection includes the stone age titles Joe & Mac, Congo’s Caper and Joe & Mac 2: Lost in the Tropics. As is tradition with Retro-Bit titles, these games are all stuffed into a SNES game cart and come with the standard box, sticker, pins and basic instruction/information pamphlet on the included games. All games are quickly accessible from the title select screen and switching between them can be done at any time through a simple press of the reset button.

Joe & Mac is the 1991 SNES arcade port where the two caveman ninjas try to rescue kidnapped cavewomen from a rival caveman tribe and battle anachronistic dinosaurs along the way. The not ready for modern time dynamic duo begin the game armed with clubs but are quickly able to grab projectile weapons such as boomerangs, stone axes and fire. The gameplay is simple and repetitive, but also fun in a non earth shattering way, especially in two player mode. The controls aren’t the tightest for the platforming and the hit detection leaves a little something to be desired, but the game is simple enough to progress through in spite of this and the visuals are rather impressive for a 1991 title with colorful characters and environments along with large-sized sprites. 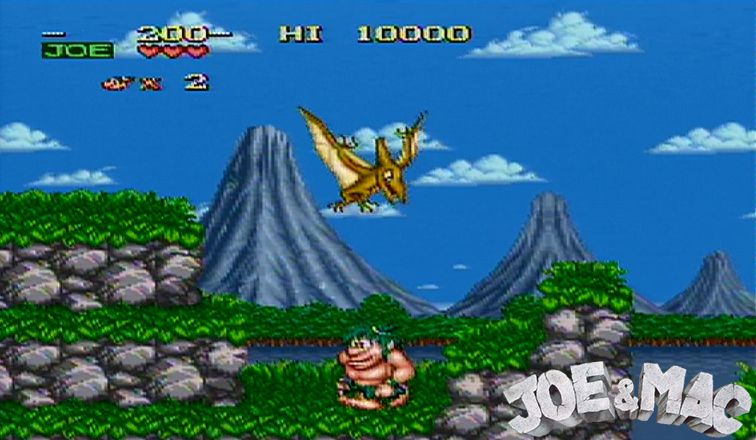 Congo’s Caper is a little strange. The player takes control of the titular Congo, who is a half human/half monkey hybrid whose girlfriend was kidnapped by demons and he has to travel through many worlds collecting gems and playing a slots minigame, all while battling dinosaurs, vampires, pirates, a dragon and weird demonic-winged people with tridents to name a few of his adversaries. Trying to summarize his journey and his encounters into a cohesive narrative is difficult, but thankfully this is just one of those weird games where the player focuses on the action and doesn’t try to make too much sense of what visual stimulation is being inflicted on them.

Putting the random nature of the game world aside, Congo’s Caper is actually a fun little action platformer. The gameplay itself is typical of the genre to offset how weird everything else is. Congo runs and jumps while smacking his foes with his club. If Congo gets hit, he turns into a monkey but can still fight with his club, but croaks if the monkey Congo gets hit. The half-human half-monkey thing is a bit weird, but that seems to be what they’re going for. If Congo was just that we could argue he’s the missing Link, which sadly is not the second quest that was never included in Zelda II: The Adventure of Link, but him turning into the monkey makes him seem more like Mario. But even with Mario the mushroom growing and shrinking makes a little more sense than this. Did monkey Congo eat a mushroom and turn into the more human Congo, or does damage curse Congo into being a monkey? Actually, perhaps mushrooms might explain a lot of what is going on with this game. 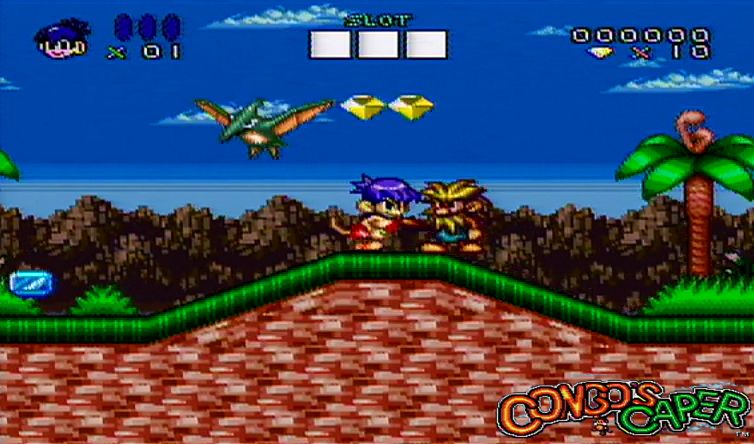 Joe & Mac 2: Lost in the Tropics is a new adventure of the blue and green haired cavemen. The graphics are of higher quality, but they still have the same overall look of the first game. The bulk of the gameplay is similar to the first game, but some primitive RPG elements have been incorporated into the sequel. The basic plot is the crown of the village chief was stolen by an enemy Neanderthal named Gork. In order to retrieve the crown from Gork, the cavemen need the seven rainbow stones which they acquire by completing levels and beating bosses because how else did you expect them to get those?

The biggest addition to this 1994 title over its predecessor is the town activity in between the main levels. The levels can be replayed to collect stone wheels which serve as currency which can be used to remodel the caveman’s house or purchase other useful items. The player can have their caveman marry their girlfriend in the village which they can woo by giving her gifts of flowers and meat (because what gal doesn’t want to be given meat?) and after they are wedded they can have a child, because even in these times that predate religion they want to have a proper family bound by wedlock. These RPG elements aren’t complex enough to get this title classified as an early action RPG, but they do add another enjoyable layer. 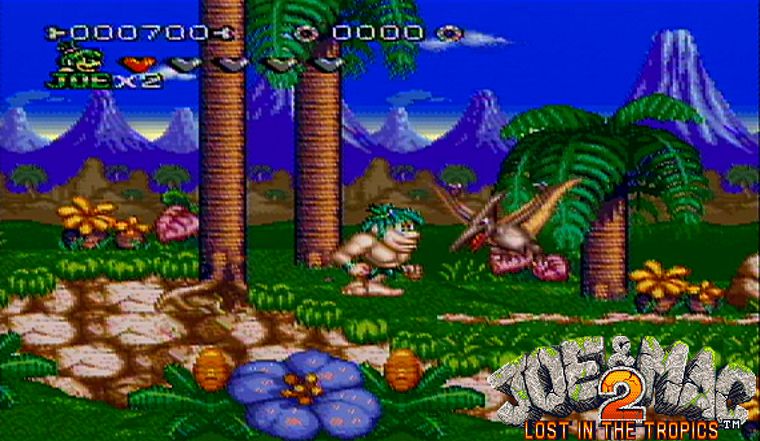 Joe & Mac: Ultimate Caveman Collection is an example of quality over quantity. All three games in the compilation are solid 16-bit platformers with a common theme and are a perfect blend of being similar enough to guarantee enjoyment, but varied enough where each feels like its own game. These may not be the best and most beloved SNES titles, but they’re all fun examples of early ’90s platformers. Ultimate Caveman Collection is a great way to revisit these titles if you enjoyed them when they were new or a good way to check them out if you remember their existence but never got around to playing them.