It seems like there would be enough twin-stick shooters in the world but, like a good Aristocrats joke, it’s all down to personal delivery.  Geometry Wars: Retro Evolved plays differently from Geometry Wars 3, Death Ray Manta bears no resemblance whatsoever to Tormentor X Punisher, Llamatron is inspired by Robotron but still its own unique game, and even something like BitFrenzy (which I was going to link and recommend despite the alpha being abandoned, but it’s gone from itch.io and the developer has disappeared off the internet, so that’s a bit depressing) was built from ideas that haven’t shown up in any other twin-stick.  It’s a simple setup with the potential for incredible variation, and Ultra Hell is in a free alpha to put its own stamp on the genre.  It’s early enough that there isn’t even any sound yet, but the action has an excellent flow and the two characters implemented so far are completely different in play style.

The setup is no different than normal — you’re in an arena, enemies spawn around you, kill them all.  Smaller enemies are simply there to keep you moving, with no benefit to killing them other than threat-removal, but bigger creatures drop cash depending on how quickly you take them down.  Money goes towards strengthening your weapon, automatically applied when you can afford it, but the best bragging rights come from survival time.  Enemies pop in at a set rate regardless of how quickly you dispatch them, so keeping the arena clear goes a long way towards not being overwhelmed.  It only takes one hit to go down, and you’re not any less dead whether that kill comes from a boss or small popcorn enemy.  Kill fast to get money to get powerful to survive longer; it’s the circle of life, helped along a bit by the occasional powerup dropped by the bigger guys. 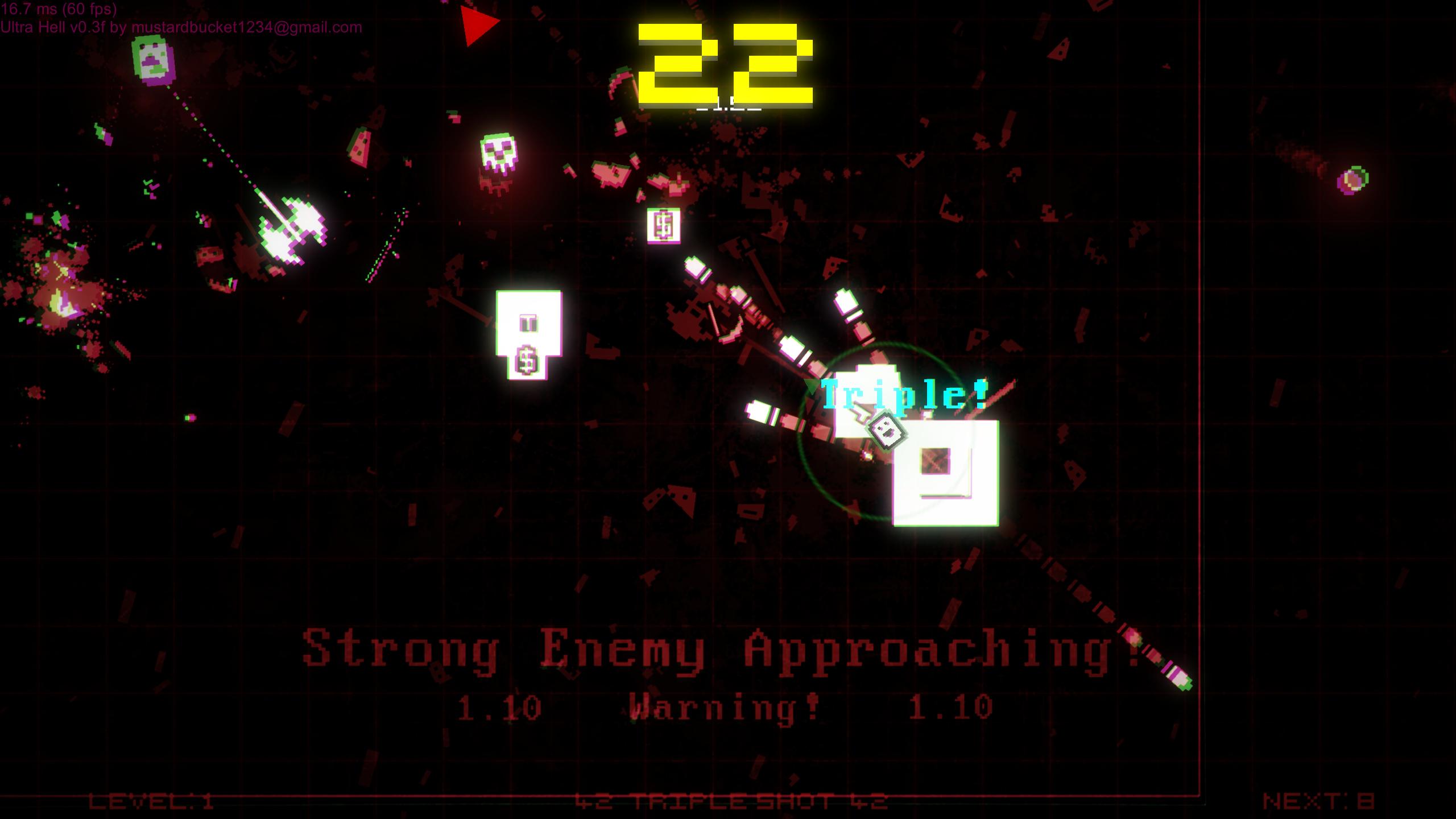 The initial version of the game had only the one character, and at the moment it’s still the only one I can play properly using a gamepad. The gun-guy (named Gunz) shoots two bullets forward and back, and the alt-fire brings both pistols together for a faster bullet-barrage that also halves his movement speed. He’s also got a dash move that’s useful for getting out of trouble or barreling straight into an enemy’s face, depending on how well you use it, but the 1/10th of a second invulnerability it grants can be quite nice if you’ve got the split-second timing.

Edge, on the other hand, has a sword, and its slash-arc covers a full half-circle in an instant swipe. While Gunz needs to dodge bullets, Edge makes up for his lack of a dash move by slicing them out of the air. He can also throw his sword and then either wait a second to get it back or teleport to where it lands, which can be nice for quick cash collection when taking out a mid-sized attacker. Oddly, while gamepad support in the current build works just fine for Gunz, Edge’s skills only function if you’re using a mouse and keyboard. Which is mildly inconvenient but hardly a dealbreaker for a super-early prototype getting regular updates. 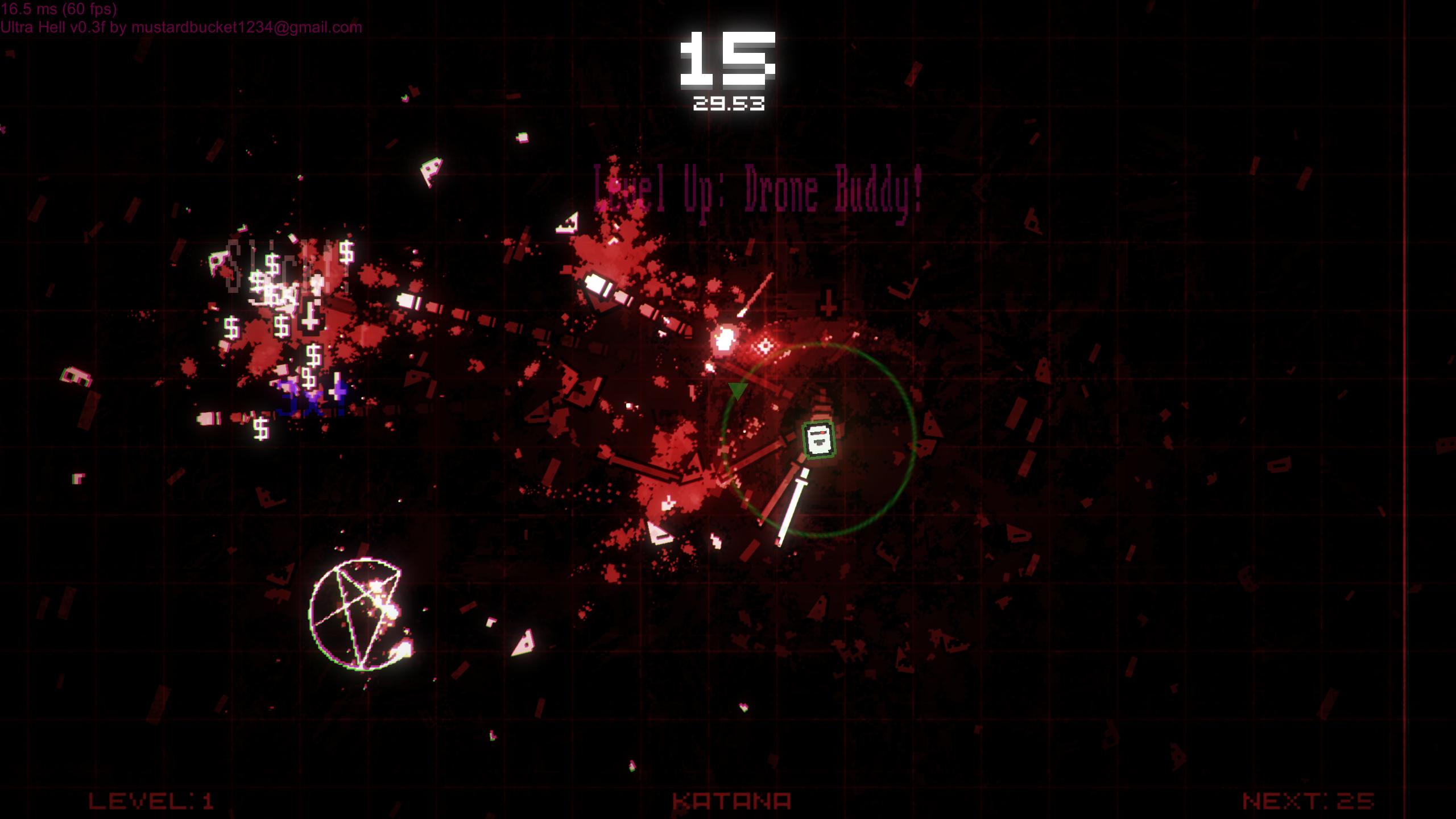 While Ultra Hell is still in prototype stage, the parts of the game that are in place feel stable, and if there are any bugs I haven’t found them.  The art style is simplistic, but once things heat up it’s easy to forget you’re an ascii smiley face wielding what have to be guns because projectiles are popping out the ends and flying towards little ultra-low-res chomping faces and skulls.  The lighting effects and feedback from firing or sword-swinging give the action a nicely chunky feel, and if one game lasts seconds, the next starts instantly and might even run a whole minute.  If you’re good and put in the practice, it’s possible to complete the 145 seconds a single round of the prototype would last and the full game is planned to be five minutes long.  There’s a lot more Ultra Hell coming before it moves out of the prototype stage, and while playing without any sound is unquestionably a bit weird, all that fades away once the action gets moving and the darkness of the arena is lit by bursts of gunfire and the flames shooting up from enemies teleporting in.  Drop by itch.io to give it a look, because there’s always room for another unique take on the classic twin-stick arena shooter setup.