This type of game may have gone the way of the dinosaur, but thanks to games like Double Dragon and Final Fight, the arcades ’80s and ’90s were filled with street-fighting brawlers, which naturally carried over to the home console market. It’s hard to imagine, but beat ’em ups were about as commonplace as first-person shooters and Dynasty Warriors clones once upon a time, and since rounding up the lesser known titles of yesteryear seems to be Retro-Bit’s MO, they’re pleased to present a collection of 16-bit titles where the fists do the talking with Jaleco Brawler’s Pack.

Jaleco Brawler’s Pack contains three co-op beat ’em ups and one Street Fighter II wannabe, which are Rival Turf!, Brawl Brothers, The Peace Keepers and Tuff E Nuff. Tuff E Nuff is the most out-of-place title in this collection as the lone Street Fighter clone, which is obvious from basic observation, but even more so considering the other three games compose the Rushing Beat trilogy. When these games were localized for the US, they were all given different titles and character names were inconsistent across each release, so they all appeared to be unrelated games even though there was some enemy name overlap and visual character design looked like each subsequent game was just ripping off the previous entry. Rick Norton was changed to Hack Brawl Brothers and Jack Flak in Rival Turf! while Douglas Bild was changed to Slash in Brawl Brothers and Oozie Nelson in Rival Turf! With this knowledge, this collection now turns into the Rushing Beat trilogy collection with Tuff E Nuff just thrown in as a random bonus.

Tuff E Nuff is a 1993 tournament fighter that tries to move the genre forward while also stepping it back. The plot takes place in a post-apocalyptic America in the year 2151 where being a champion fighter is extremely important. Some chap who has the markings of a super villain named Jado has erected a massive tower to show his might, and has chosen four champions aka the playable characters to fight each other. Whoever reigns victorious in this face off will get to enter the tower and fight each of Jado’s minions before facing off against him. The plot does put a somewhat unique twist on the tournament fighter motif and the Street Fighter style visuals work well for the character and stage designs. The game attempts to introduce some RPG elements by having the special moves become more powerful as the player progresses, but having only four selectable fighters limits things quite a bit. Supposedly there is a code that unlocks boss characters as playable characters, but even with those extra characters this title is just another drop in a bucket filled with enjoyable but unremarkable fighters that never got out of Street Fighter’s shadow. 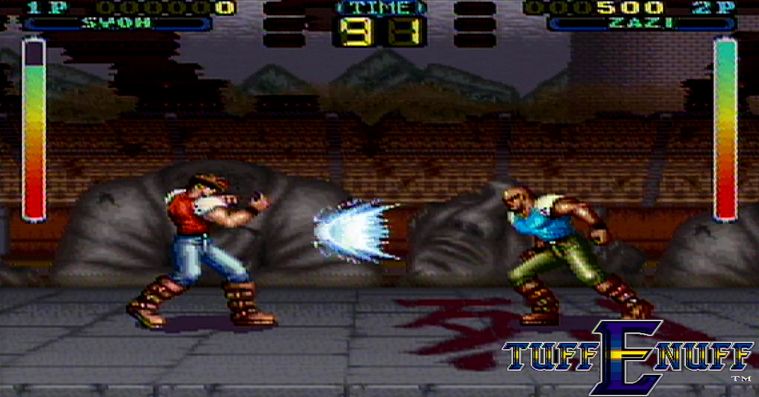 Rival Turf! is basically a 1992 Final Fight clone.  Jack Flak’s girlfriend Heather was kidnapped by The Street Kings, a gang led by Big Al. Jack gets his cop buddy Oozie Nelson to help him go take on the gang in a street fight, even though it seems like it’d be smarter to just get the whole police force to assemble a SWAT team to take care of the gang problem. Flak is a medium build martial artist, and Nelson is a beefy dude who can throw down some mean pro wrestling moves. If this sounds like Cody and Haggar to anyone reading this, rest assured this reviewer thought the same thing. There is even a level where the fighting continues on a public transit device, though in this case it’s a city bus and not a subway train. Though lacking in innovation, something Riual Turf! has that Final Fight doesn’t is a two player mode, which got lost in the latter’s arcade to SNES translation. Everything else about Rival Turf! screams Final Fight knockoff, and outside of the essential two player mode Final Fight does everything better.

Brawl Brothers sees the return of Flak and Nelson in 1993 with larger roided up physiques and are now going by Hack and Slash. The story gets away from Final Fight plagiarism and into something a bit more weird. People are going missing and it is suspected that there is a human cloning experiment going on. The player can choose between Hack, Slash or one of their three friends from the dojo and take the fight to the streets. The gameplay is largely the same as all the titles in the Rushing Beat trilogy where the player moves four directions across the horizontally scrolling plane punching, kicking, acquiring random weapons and finding health replenishing chicken inside of oil drums. The hit detection and overall gameplay mechanics aren’t stellar but they are actually a step up from Rival Turf!, which is a pretty apt description of this title as a whole. 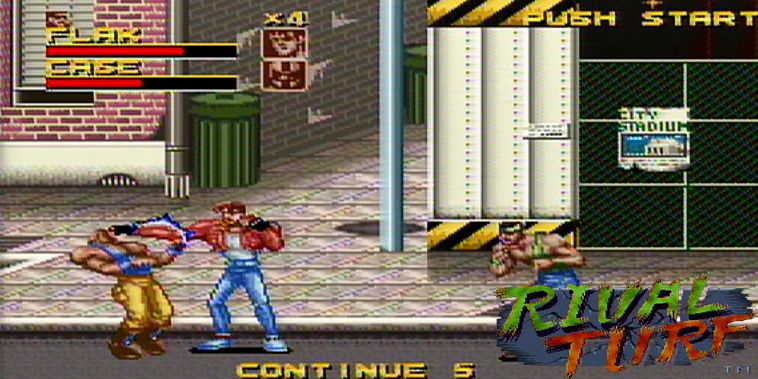 The Peace Keepers closes out the Rushing Beat trilogy in 1994. Set in the future (2015 to be exact) the Deutschland Moldavia corporation rules the world and controls access to all resources. The player can select one of six playable unique fighters. Rick Norton is one of the playable characters for once appearing under his real name. Douglas Bild is not, but he does make a brief cameo. The other five characters have varied backgrounds and fighting styles but all have their own personal vendetta against Deutschland Moldavia, including a robot because street fighting battle robots were common in 2015. The gameplay is pretty standard beat ’em up fare, but it distinguishes itself with branching paths and multiple endings. The player can choose to take different routes that will lead to different boss battles. This was ambitious for a SNES game in 1994 and not something anyone would have expected from a brawler title. A lot of gameplay mechanics have come together nicely since the first two games in the series, giving Rushing Beat a strong send off despite the rocky start.

The three Rushing Beat titles are the American versions, so the stories are the altered Americanized ones with all overt ties to each other remaining severed, though even if someone knew nothing of the games being connected they would notice a lot of design similarities between them. It would be interesting to see a proper unmodified localization and translation of the Rushing Beat titles to experience this trilogy as it was originally designed, but that would probably never happen due to the popularity of these titles. A nice feature all three of the titles share is the ability to turn friendly fire on and off in the option menu. The Rushing Beat titles also feature a two player versus mode, with The Peace Keepers allowing this battle to include up to four players for those that have the SNES Super Multitap or any of the other adapters that allow for more than two controllers. The versus mode is nothing to write home about, but it can be fun if you’re already playing the games with a friend.

Jaleco Brawler’s Pack is a nice collection of beat ’em ups even if the individual strength of each game isn’t phenomenal. Even Rival Turf!, the weakest and easiest to criticize title in this collection, is enjoyable in spite of its flaws, especially with a friend. Admittedly, back in the SNES era, Rival Turf! was a weekend rental and playing through with a friend was a lot of fun. The games included here are clearly not the best of the best, but it is nice that Retro-Bit is releasing titles that aren’t limited to those only found on best of lists and not already released on countless other compilations. The target audience for this collection are hardcore beat ’em up fans, but anybody who enjoys these type of games from this era can have a good time.