Begin by sitting down and make sure to get comfortable. Now close your eyes, inhale, count to five, then exhale — now open them, what do you see? That’s right, it’s your car teetering on the edge of a cliff with not a soul in sight to help you. This is Far from Noise a game by George Batchelor, known for his previous work on the pug-dating simulator, Hot Date.  Far from Noise is a different sort of narrative. After the under two-hour playtime, it’s hard to walk away without feeling calm, thinking about life and generally staying positive. In other words, it was the perfect game to start 2018.

A game about ones’ car teetering on the edge of a cliff does not sound fun. In fact, it sounds about as stressful as can be and is for our young protagonist trapped in her car. The player character is never actually shown, nor is it first-person, instead the focus is on the same still screen with only the passing of time to change it, kind of like real life. All the decisions around this game design allow for the player to immediately feel like the situation belongs to them, while also feeling protective of the PC. Think of it as having an out-of-body experience; the player is the PC looking at her own situation in Far from Noise. It might also explain being able to talk to animals, which will be addressed. 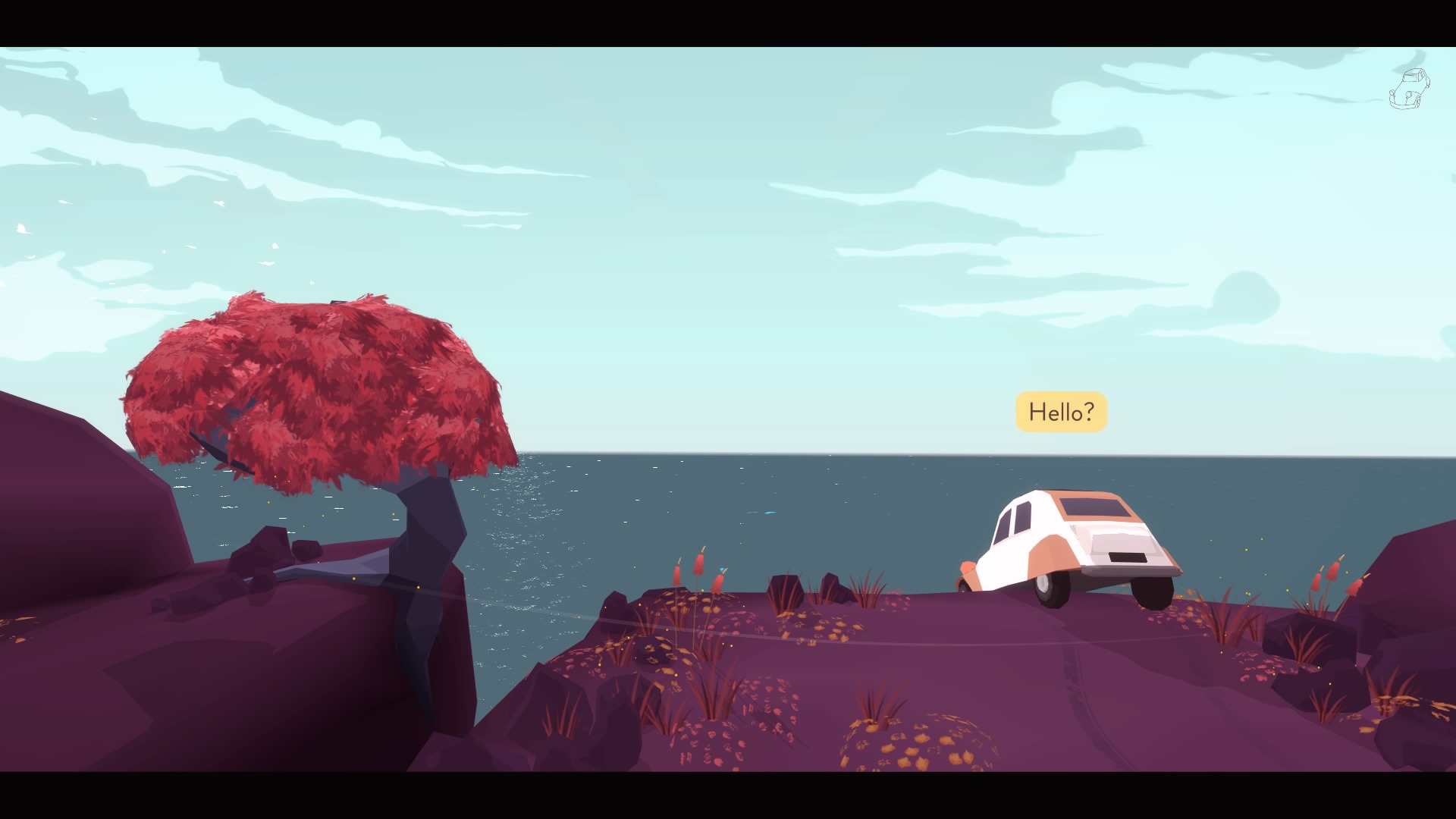 Having that connection to the situation, Far from Noise allows for the conversation dynamic taking place to flow naturally. Yes, the silly answer to a conversation will sometimes rear its head, but even these choices feel more appropriate than in other narrative-choice driven games. It’s not uncommon for people to resort to dark humor to make light of an unpleasant situation; facing ones in impending doom is sure to spark some inappropriately humorous dark thoughts, but these narrative choices are just small fish though in a much larger pond.

What Far from Noise reveals itself to be is a game about keeping calm while recognizing the present. It’s doing something other games don’t. Far from Noise doesn’t have objectives or other vignettes made up through various screens, it just has the cliff. It opens with the car already teetering on the edge and it closes the same way. It’s everything that happens in between that makes the lessons it wants to impart potent in a way other games can’t be. Grasping the player’s attention and holding it guarantees that the sole focus is on that dialogue on the edge of the cliff. In the opening minutes it’s hard not to stress about toppling to the jagged salt encrusted rocks below, but any fear of death will quickly be washed away.

In an age of social media frenzy, people have becoming increasingly afraid of missing out, of not being around others, not partaking or not feeling like they matter. With the now annual barrage of online photos, videos and various other content, people are constantly in other peoples faces whether they realize or not. You might say you’re alone as you sit in bed feeling left out on a Friday night because you didn’t make plans, but don’t tell me you’re not about to scroll through every social media platform under the sun as the night goes on. Keeping up matters. Far from Noise is the bat over the head to wake-up look around and enjoy wherever you are (unless it’s a bad situation), because you’re not as alone as you think. 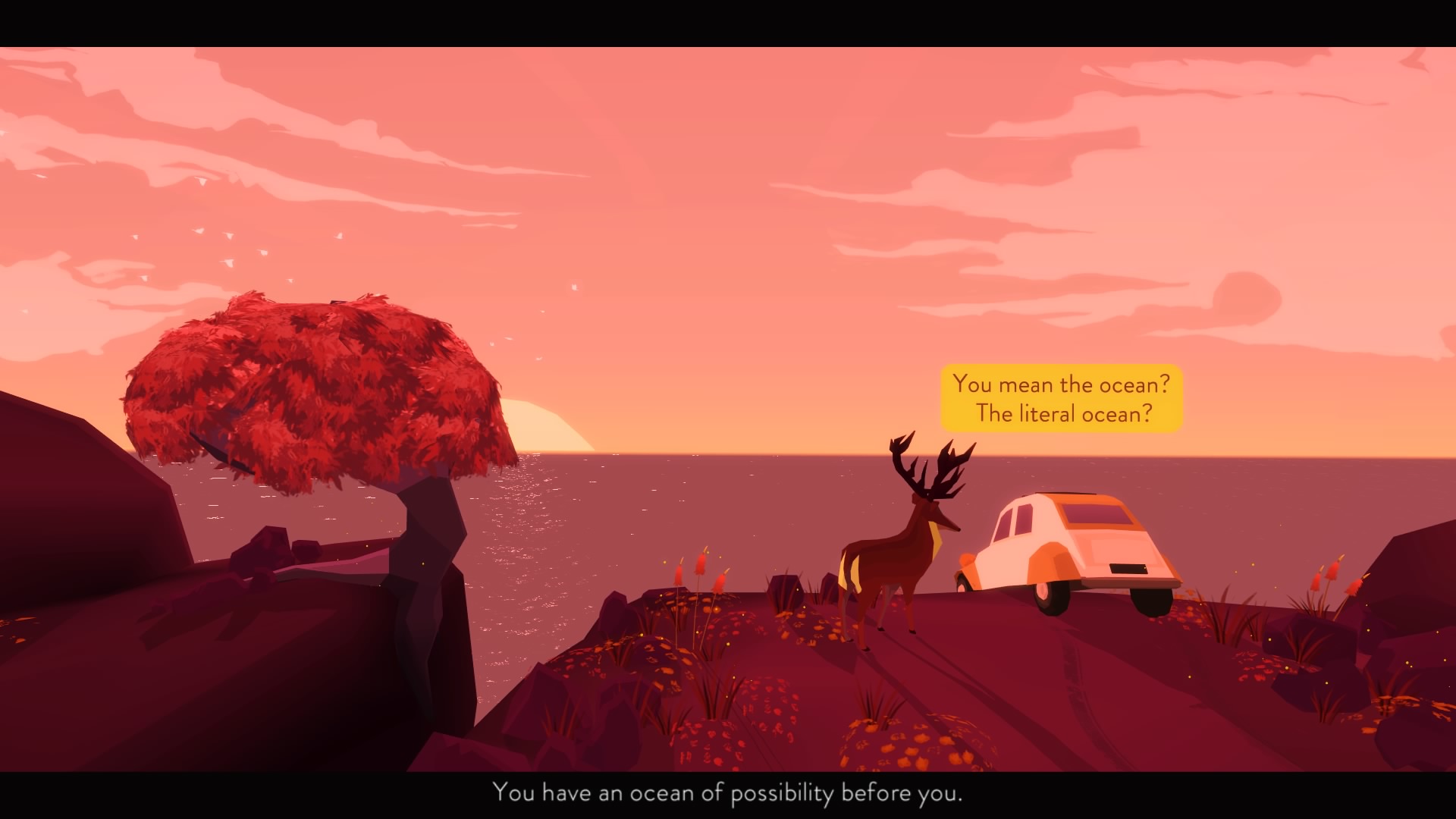 Got a real wise guy.

Far from Noise challenges a belief system that has become ingrained in our psyches, thoughtfully pointing out that maybe it’s time to reevaluate certain modes of thought. No, don’t go trying to find a life-threatening situation to get some clarity on life, that’s what the game is for, but do try and recognize that as bad as it can seem at times, it’s possibly due to focusing on the wrong things. Having a talking deer-friend as a guide can be pretty useful too.

Far from Noise would probably not be as interesting if teetering on a cliff is all that happened, but luckily that is what the magical talking deer is for. The opening of the game sees the Sun high in the sky having just passed high-noon or one if guessing and is also an indicator that the world is moving right along. Sure, you might be stuck on a cliff, but it’s not the only cliff and it won’t put a halt to the world. As the day moves along, various things make themselves known. Spending time in any one spot will do that. Ever sat in grass long enough to become familiar with individual blades? Same thing. Eventually one of the many visitors to stop by to see the car-on-cliff is a buck. 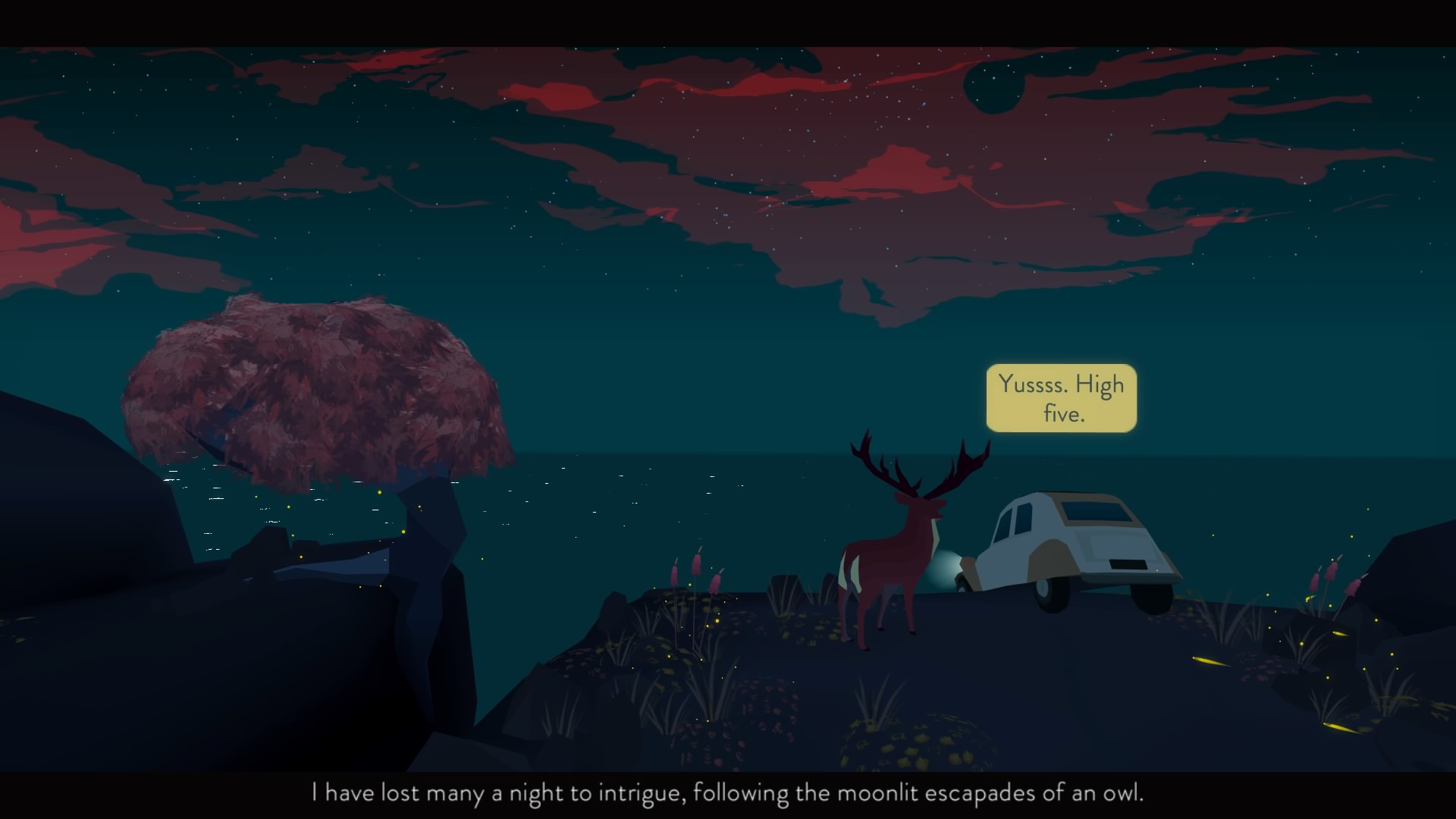 This buck becomes the guiding force for the dialog, and like a true master imparts wisdom without the slightest hint of teaching a lesson. Part of having dialogue is understanding that a certain type of conversation is taking place. It’s the tossing around and mixing of ideas to bring forth thoughts that cast illumination on a topic at hand or turn to something frivolous that can be tossed aside. That is what the deer-friend is for, to have dialogue with yourself. Who knows if the deer is really talking, that’s not the point. The agency to recognize certain modes of thought and deconstruct that thought into something that enlightens is what’s important.

From the moment the deer-friend makes their appearance, a tonal shift begins to take place. Instead of worrying about falling off the cliff, being invested in the conversation takes priority. It isn’t until after the deer is gone, the conversation over, that becoming aware of the cliff again actually isn’t that big of a deal. The deer’s magic has worked. Instead of fretting over what the future holds, the possibility of death or any other worries — take a deep breath in, count to five, exhale and try that engine again. Couldn’t hurt, right?