People play video games for any number of reasons. For some of us it is just the simple enjoyment of the game mechanics while others do it more to get sucked into the story. Something that isn’t talked about often in the gaming the community is the great parental figures that populate many games, but there is no better father figure to be found in the thousands of published games than the King of All Cosmos. The King is a man that knows how to dress to the nines, is quick with his tongue and is just a great role model for aspiring dads everywhere. And on top of a father that belongs on Mount Dadmore with Homer Simpson, Cliff Huxtable and Al Bundy, Katamari Damacy is a unique and enjoyable title for the PlayStation 2. There were some sequels that were fun, but failed to recreate the experience of playing the original for the first time.

The basic premise of Katamari Damacy is the colossal King of All Cosmos went on a bender and in his drunken state destroyed all the stars and celestial bodies, which is not too different from a couple of Hardcore Gamer staff members at E3 who shall remain nameless. The King of All Dads could have used his royal prerogative to order his loyal subjects to repair the universe but instead used this as an opportunity to instill the value of hard work into his tiny son the Prince, who stands a towering five centimeters tall. He bestows a Katamari to the pint sized prince and sends him to Earth to fix the mess he created.

The Katamari is a magic ball that when the Prince rolls it over anything smaller than the Katamari the random objects will attach to it, kind of like a lint roller mixed with a vacuum cleaner. Earth seems like the ideal place to send the Prince since there is so much random junk strewn about the planet. The objects start out quite small, basically tiny knick knacks like small pieces of candy and matchsticks to larger items like toys, sports equipment, fence posts, benches, cars, dogs, people, houses and giant squid. It starts innocent enough but a lot of animals and people get rolled up into the Katamari that gets sent up to be part of a constellation, so if one were to over-think it this is the least violent game with the highest death toll as all those poor people and animals are sent into outer space with our assorted junk because of some drunk destroying everything in the night sky. 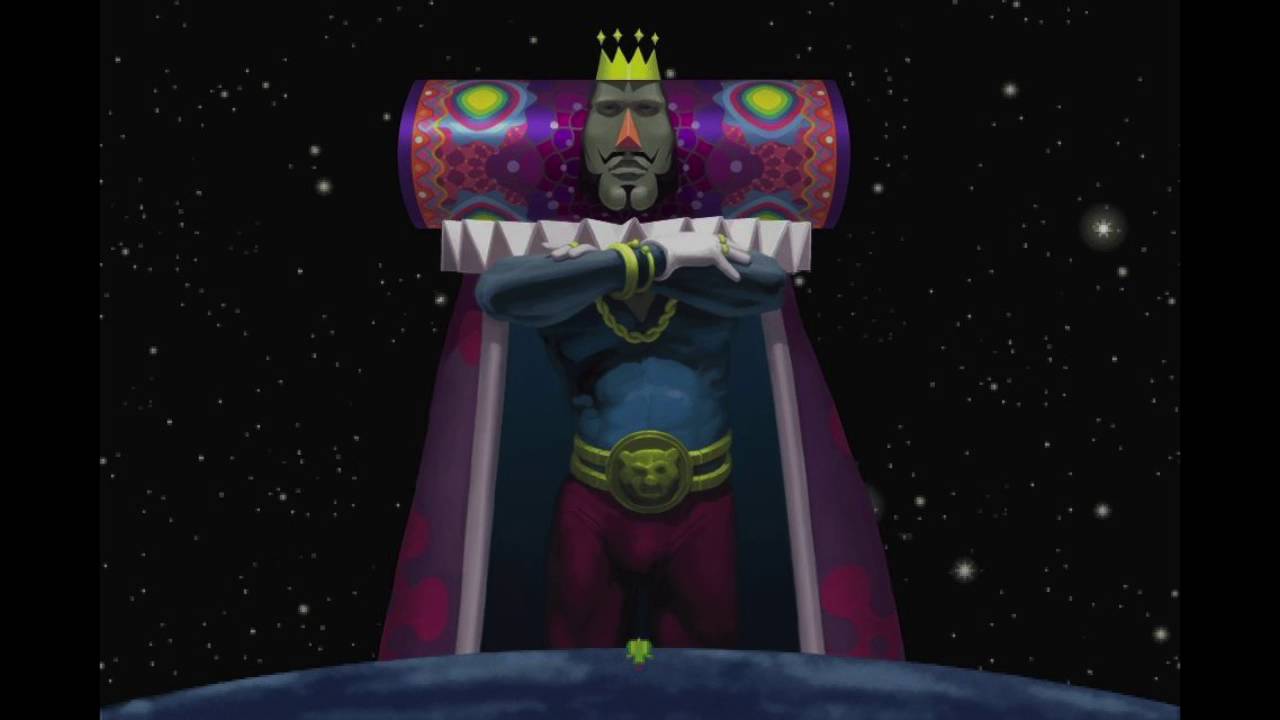 Now that a super cute game has been turned into a murderous rampage where countless living beings are sent to a celestial grave, let’s focus on the actual gameplay. Each level the Prince has to roll up a Katamari to a certain size as determined by the King. The player moves the Prince around who automatically rolls up any small object the Katamari comes in contact with. As the  Katamari grows it is able to roll up larger items, making certain areas of some levels only accessible after a certain point. There is a time limit because the King is impatient, and failing to make the Katamari a certain size in that time limit fills the King with ire and shame, while vastly exceeding the required size of the Katamari causes the King to feel less shame.

The overall simplicity of the game mechanics work well to give Katamari Damacy a borderline addictive quality, since it is easy for anyone to pick up and play it but actually reaching some of the goals can be a bit of a challenge. The King is a great motivator for self improvement, so replaying levels to try to get the biggest Katamari possible is a fun way for players to challenge themselves and the fun is compounded by watching the increasingly ridiculous items and animals get rolled up into the star in the making. Each item has a couple hidden items, such as a present for the Prince and one of the Prince’s cousins who can also be rolled up. These cousins are the rare exception to being a star ingredient and are instead kept alive to be a playable character in the multiplayer mode, where two players go at it on the splitscreen and try to make the biggest Katamari. As pleasing the King by brandishing the largest Katamari is important, players can ram into each other and knock objects off their opponents Katamari, decreasing the overall size. 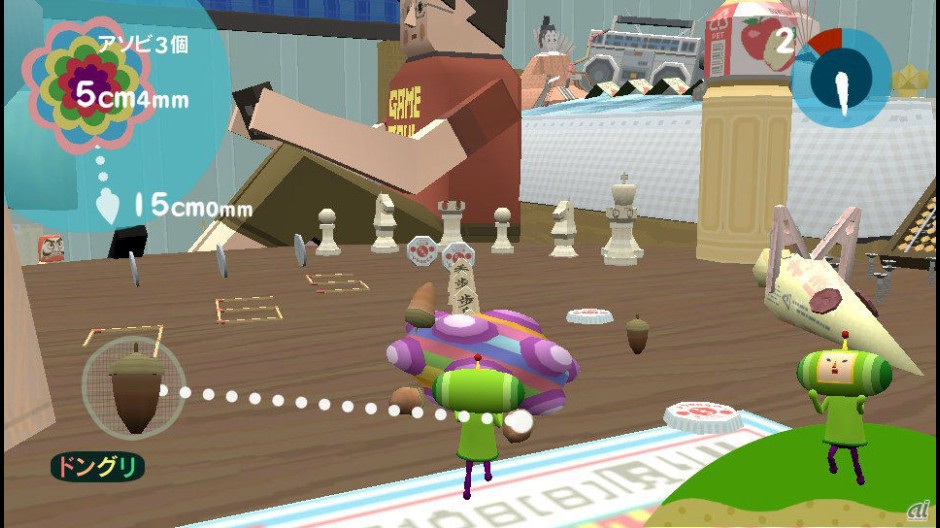 In addition to following the family activities of the royal family, during the Prince’s removal of all items from the Earth there is a side story going on featuring the Hoshino family. This family just sort of exists in the cutscenes between levels. The father of the family is an astronaut and he is inconvenienced by the King’s inebriation since he was supposed to go the moon that day but can’t because someone had a little too much to drink and destroyed it. His daughter Michiru is able to feel each constellation returning to the sky, but no one listens to her because she is suspected of being crazy and/or on drugs. Like all tragedies involving monsters, demons and aliens, his ramblings of the constellations being restored go unheard until the entire family gets rolled up by the Prince to be sent into the vacuum of space.

Saving the best for last, let’s focus on the King of All Cosmos. There is a lot to talk about with this dude, but let’s first address the elephantitis in the room regarding the most fashionable King’s choice of purple tights. Whenever I show someone this game for the first time, they always make some comment on the King’s royal bulge, which happened so much we ended up coining the term the incredibulge. I suppose enough people spoke about this that the developers had the King wear less revealing pants in future Katamari titles. Aside from his bizarre appearance and gloriously groomed mustache, the King of All Cosmos has quite the way with words and frequently uses the royal we. He states to the Prince are never overtly cruel, but almost always have some hidden barb included and always convey the message that the minuscule Prince is an endless source of disappointment. This constant subtle verbal abuse might be what drives the Prince to constantly want to improve and build a bigger Katamari, but the King does take responsibility in his failings as a parent, as evidenced in this quote when the player fails a level “it’s not your fault. It’s our fault for believing in you.”

Katamari Damacy is one of those games that is as great as it is weird. The opening sequence kicks off the fantastic soundtrack while showing off its bizarre nature.The gameplay is repetitive but remains fun throughout and watching the bizarre assortment of everyday items come together to form the Katamari is amusing. The King of All Cosmos has some of the best quotes of any video game character, and by best we mean most random and nonsensical which is all part of the royal charm. There are a few Katamari titles out there, but the original Katamari Damacy is the best of them. Glory to the King of All Cosmos.