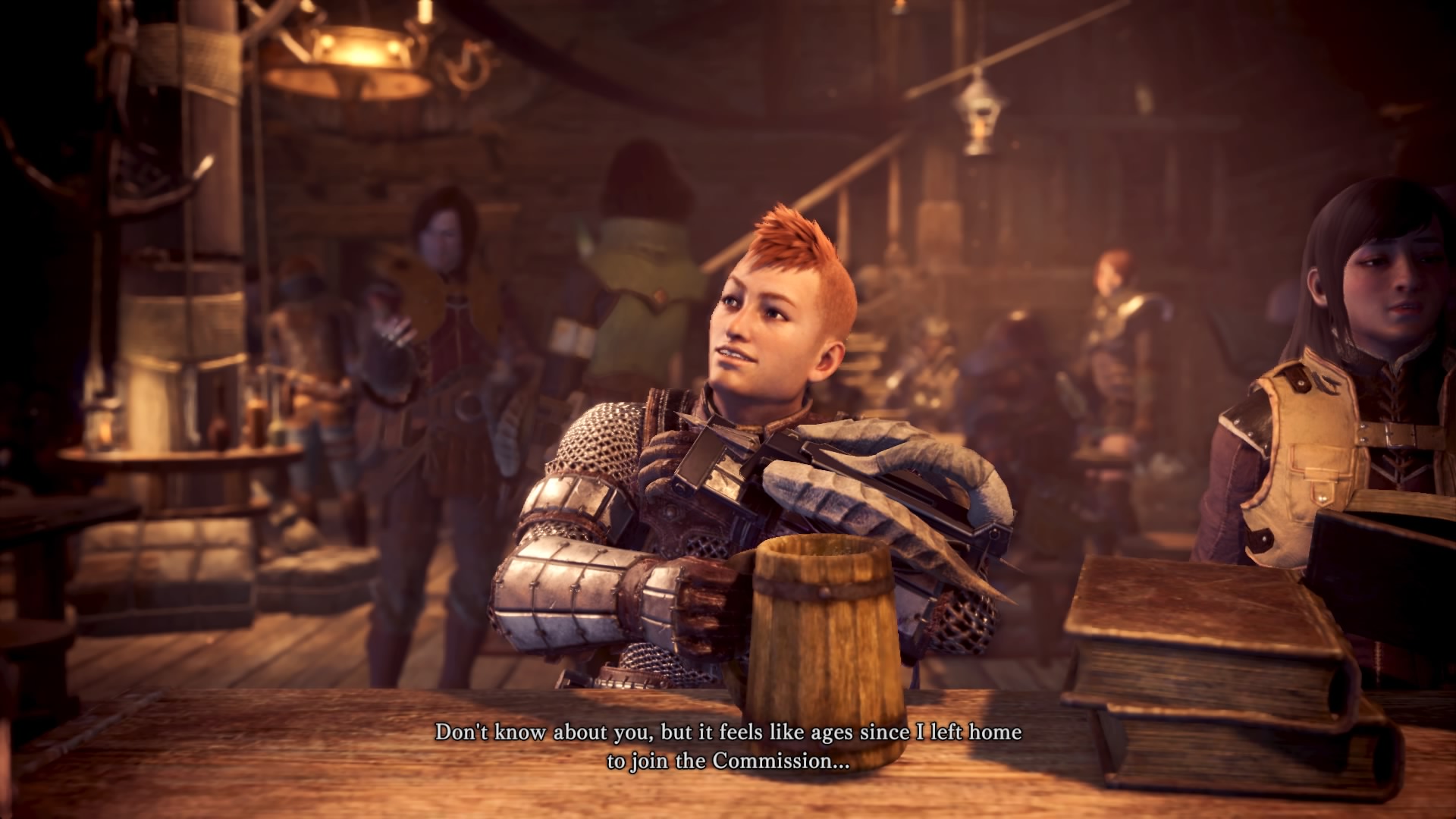 After sailing the ocean and making their way to the new world, the fifth fleet arrives in the city of Astera looking to help researchers in their studies to learn about the elder dragon crossing. As they begin to learn more about the elder dragons and why they come here, even more mysterious events and monsters begin appearing. It’s up to the hunters to keep learning more about these monsters while fighting them back in order to uncover what is really happening in the new world.

There are the four main maps that hunters will visit while hunting. Memorizing each one will take some time as they are multi-layered, but each area is numbered for quick navigation.

Ancient Forest
While it first it might seem quite peaceful, the Ancient Forest is filled with fierce monsters seeking to protect their turf. The trees of this forest are so huge that hunters can climb vines to the near top, where they might find the nests of protective wyverns who rule the skies. 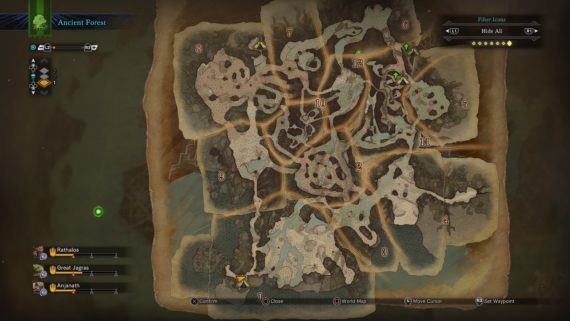 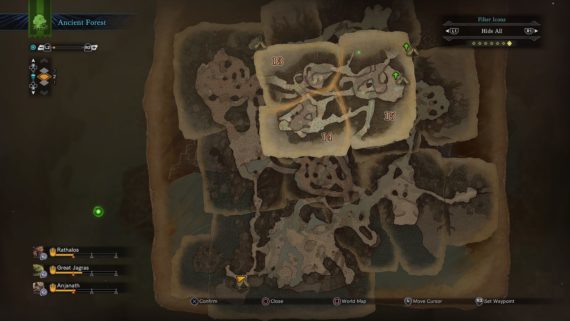 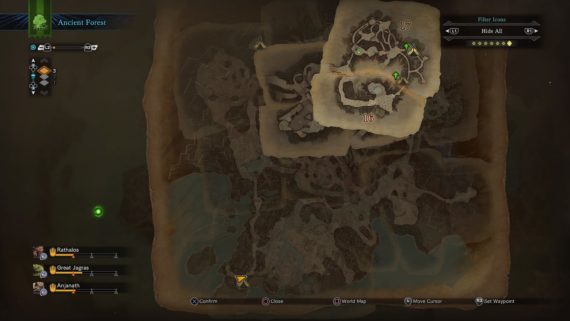 Wildspire Wastes
This wild terrain of the Wildspire Wastes is home to monsters who can survive in the harsh, dry environment. Many of them take advantage of the nearby swam to cool off and cover themselves in protective mud. Be careful while traveling the dunes, as monsters may lurk below the very ground waiting to emerge. 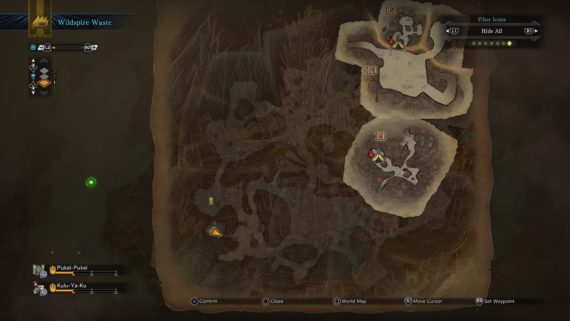 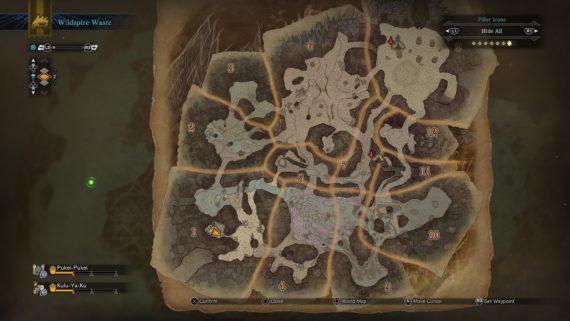 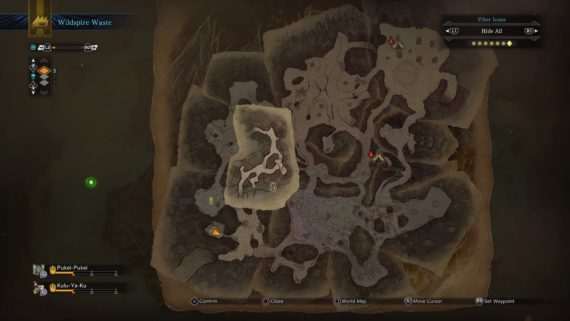 Coral Highlands
The beautiful Coral Highlands is home to various unique wildlife and flying creatures who live among the unique coral flora that grows here. Be cautious not to get too distracted by the beauty, as monsters blend in among the light colors and may catch any distracted hunter off guard. 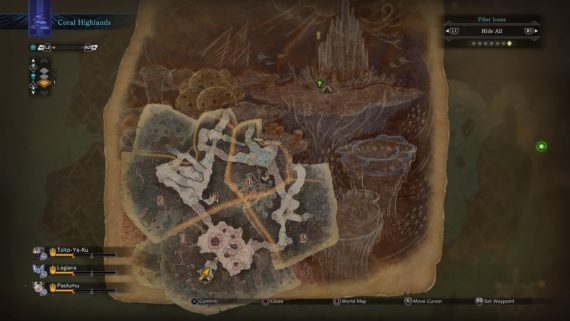 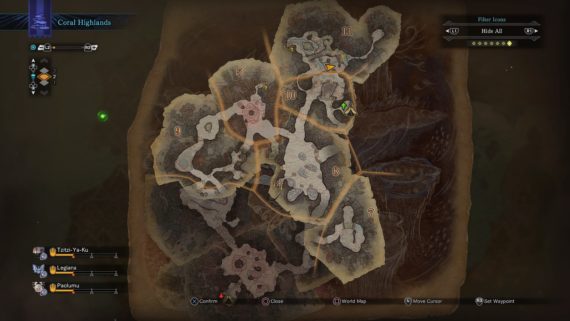 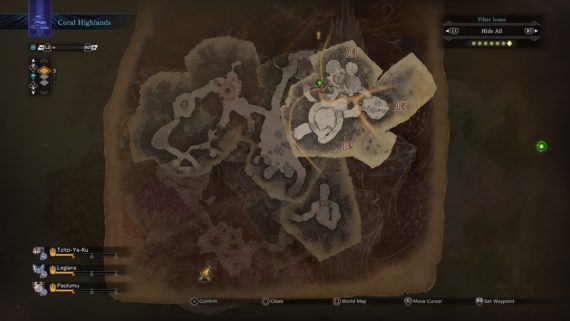 Rotten Vale
The Rotten Vale is full of more dead monsters than living, and the monsters that do roam here look as though they’re part of the undead themselves. Be careful diving deep here, as the gas will damage any hunter who breathes it in. 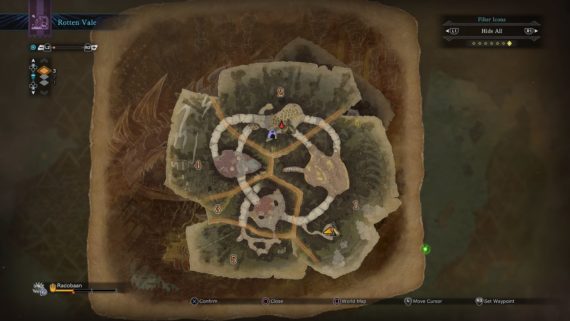 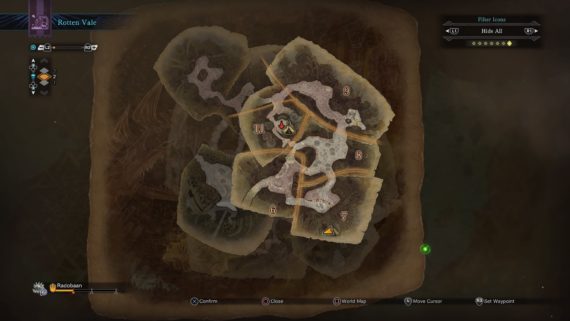 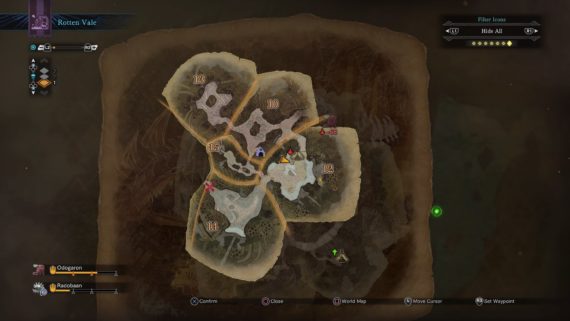 Bird Wyverns: These small wyverns tend to have small raptor-like bodies, and often feathers of some sort on their body. They are usually agile and often capable of flight if fully winged.

Brute Wyverns: These land-locked wyverns are huge, usually having tough bodies build for ramming other monsters and hunters. They are often slow, but take large steps and often charge straight-on when angry.

Fanged Wyverns: Most commonly these wyverns are mammal or amphibian-like monsters incapable of flight. They tend to be swift and like to try and pin hunters down, and usually come equipped with a nasty set of teeth or claws.

Flying Wyverns: These deadly wyverns are usually above it all, often diving in for the kill from the air or shooting attacks from above while out of reach. They are easily knocked down to the ground when attacking their legs, but watch out for their strong tails.

Piscine Wyverns: These fish-like wyvern usually prefer to stay in liquid, whether water or magma, and aren’t afraid to try and drag hunters in with them. They tend to be clumsy on land, but will with their large tails around for protection.

Elder Dragons: These monsters come in all shapes and sizes, but are all very ancient creatures. They cannot be capture in traps, and are usually incredibly fast. The largest of elder dragons can be walked upon like they’re an island, but their body will fight against any hunter who disturbs them until they are gone.

Small Monsters: These varied monsters range from harmless herbivores to small annoying bugs. Most will attack hunters if disturbed, but don’t have much health and won’t give chase for long before giving up.

Choosing the right weapon is important when going into battle. Take the time to learn the strengths, weaknesses and difficulty level of each one to find the right fit.

Difficulty: Medium
Description: Able to charge up strong attacks while still moving which drains stamina. Aiming for the head is essential to get that knock out, but hitting anywhere else will exhaust monsters.

Difficulty: Hard
Description: This heavy hitter is capable of playing songs to buff the user and allies in a fight, and hold onto melodies to save them when the time is right.

Difficulty: Easy
Description: The shield keeps hunters from many attacks, while the small blade makes it easy to attack quickly. The only weapon that allows item use while unsheathed.

Difficulty: Easy
Description: Quick movement with multiple strikes at once, demon mode allows hunter to become even faster with attacks and able to dodge easily.

Difficulty: Medium
Description: Hunters who wield this will be moving quite slowly, but with perfectly aimed attacks can be an utter powerhouse by dishing out massive hits.

Difficulty: Easy
Description: A large, quick weapon that can dish out strong combo attacks after charging but requires precise timing and aim to be the most effective.

Difficulty: Medium
Description: A weapon based on many combos and actions that can be performed in two different weapon modes. Can perform huge outputting attacks and charge up both axe and sword modes.

Difficulty: Medium
Description: Its axe mode swings large and heavy attacks while sword mode is quick and can do a special burst attack and more status or elemental damage.

Difficulty: Medium
Description: A weapon that gets stronger as its insect gathers different monster essences. It is able to jump and perform aerial attacks, in addition to being the easiest weapon to mount with.

Difficulty: Hard
Description: A weapon all about targeting the weakest points on a monsters, its repetitive pokes are simple but it can shield and dodge most attacks while also countering strong hits.

Difficulty: Medium
Description: Similar to a normal lance with the ability to also fire shells at monsters. Thrusts and shells can be combined for amazing combos with a boom.

Gunner Weapons
Strengths: Great status and element, usually stays further from the monster
Weaknesses: Requires ammo to be crafted or bought, precision while aiming is required to do maximum effective damage

Difficulty: Easy
Description: The smaller of the two bowguns, it does best with elemental and status effect ammo. It has wyvernblasts that can be set in the ground and explode when they take any damage.

Difficulty: Medium
Description: This heavier bowgun moves a bit slower but can string together strong attacks with wyvern ammo or rapid fire ammunition.

Difficulty: Medium
Description: The bow uses arrows coated in different ammunition types in order to attack. Special attacks include shooting multiple arrows at once and raining damaging attacks from above.

The main town players will visit before and after quests, locations listed below are important to remember with a few being unlocked by progressing the story. 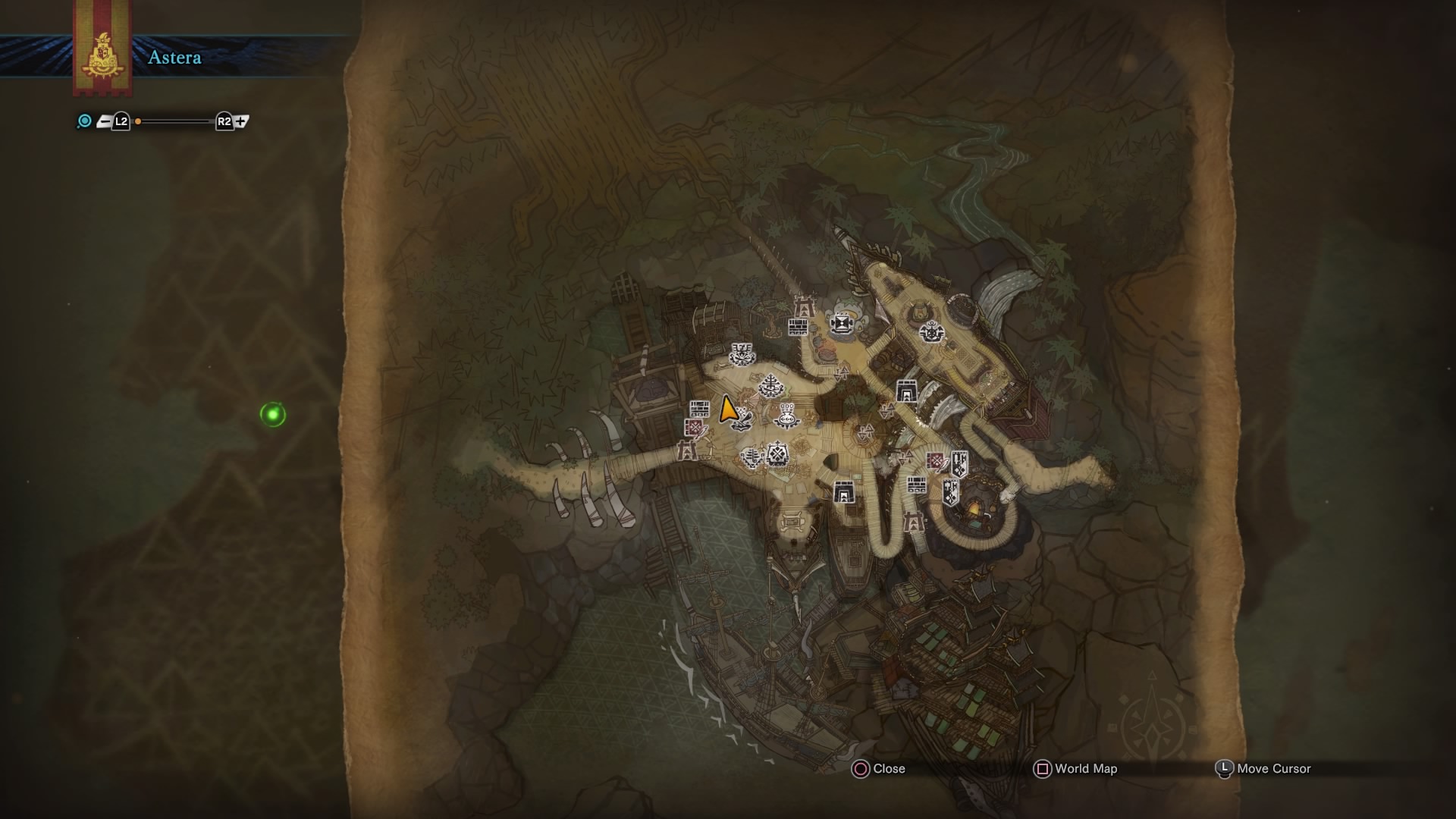 Quest Board: Get all the quests here or from the handler. Story, optional and investigations missions can be taken here in addition to future DLC quests.

Workshop: Head here to upgrade or craft weapons, armor and charms from the smithy or purchase basic sets from the armory.

Tradeyard: The merchant here will sell a variety of items and gets more as players progress. Also sells ammo for gunner weapons.

Canteen: Eating here before every quest will increase health, stamina and even reward bonus skills.

Ecological Researchers: The researchers here will take any collected information on monsters and add it to the hunter’s guide which can reveal weaknesses and items dropped.

Your House: Small cosmetic features can be changed on hunters here, in addition to some decorating being available.

Elder Melder: Can turn some items into others such as ammo, potions or even rare monster parts.

Argosy: Head here to purchase items they bring back with research points, can be anything from plants to monster parts.

Gathering Hub: Allows online hunters to meet up while also being where arena quests can be taken and squads created.

Monster Hunter: World is a series about knowledge, knowing what to expect from monsters and how to find the advantage along the way be it with weapons or simply remembering how opponents move to avoid danger. Learning how to navigate maps makes for quicker travel, and mastering weapons is a must in order to deal the greatest amount of damage. Be sure to stock up on plenty of items in Astera and head out to uncover the truth of the new world.