Whether an experienced hunter or just a beginner, Monster Hunter: World brings new things to the table that are important to know. There’s more than just hunting and no one can get through this on button mashing alone. So before you head off into the hunt, read up on our tips for what you should be prepared for in the wilds of the new world.

First Off, Check the Settings 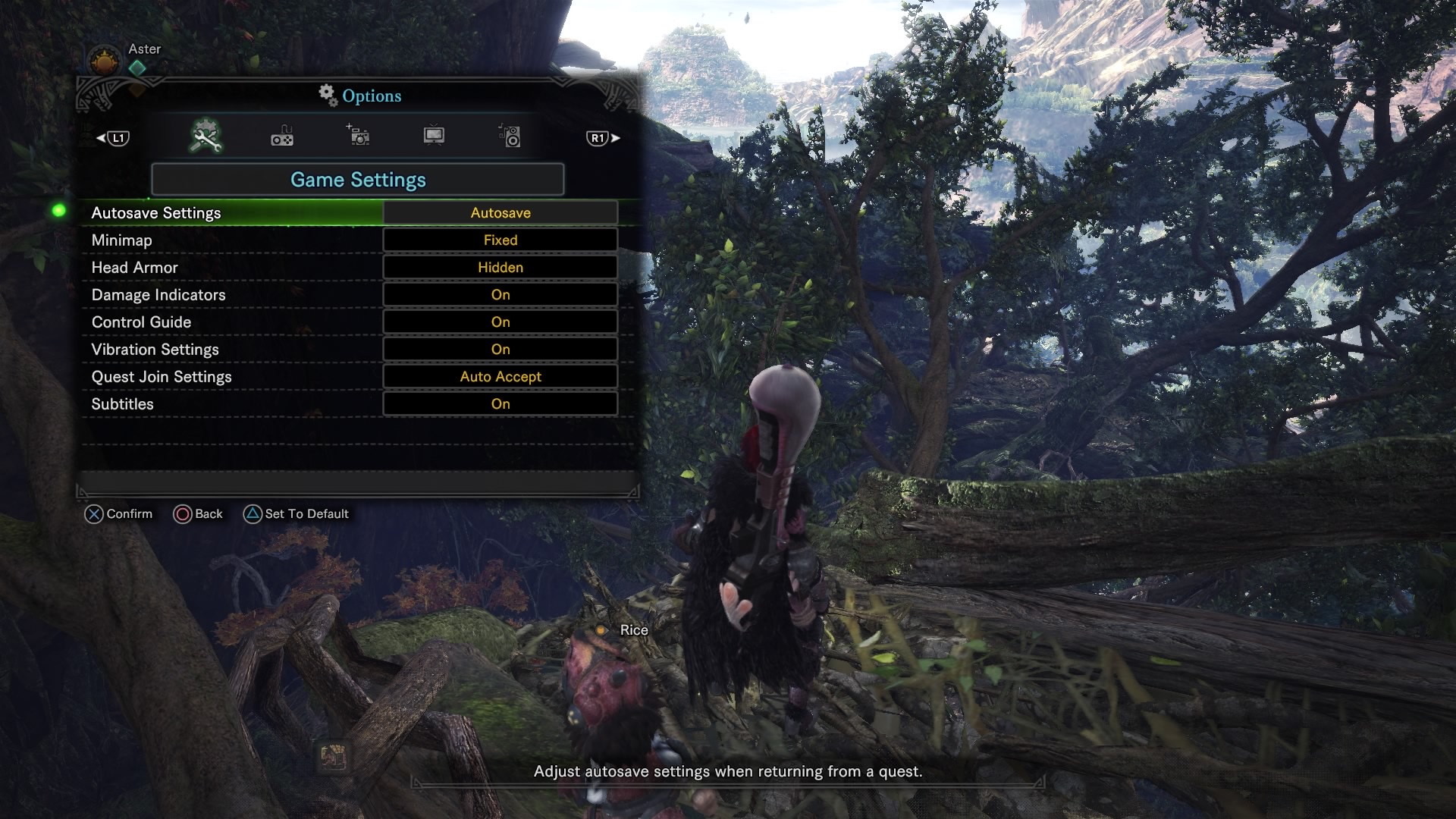 Every hunter plays differently. If you’ve played the 3DS titles, you’re likely most familiar with that control setup. World has changed quite a few things, and if you want to set it up to be familiar be sure to go through the options and find the settings that are most comfortable to hunt with. There’s a brand new radial menu to quickly access items on the go, but it’s easy to accidentally select the item and use it with the default settings. The camera also has a habit of focusing itself on points of interest, which is helpful, but this can also be adjusted if you don’t want it dragging you around. 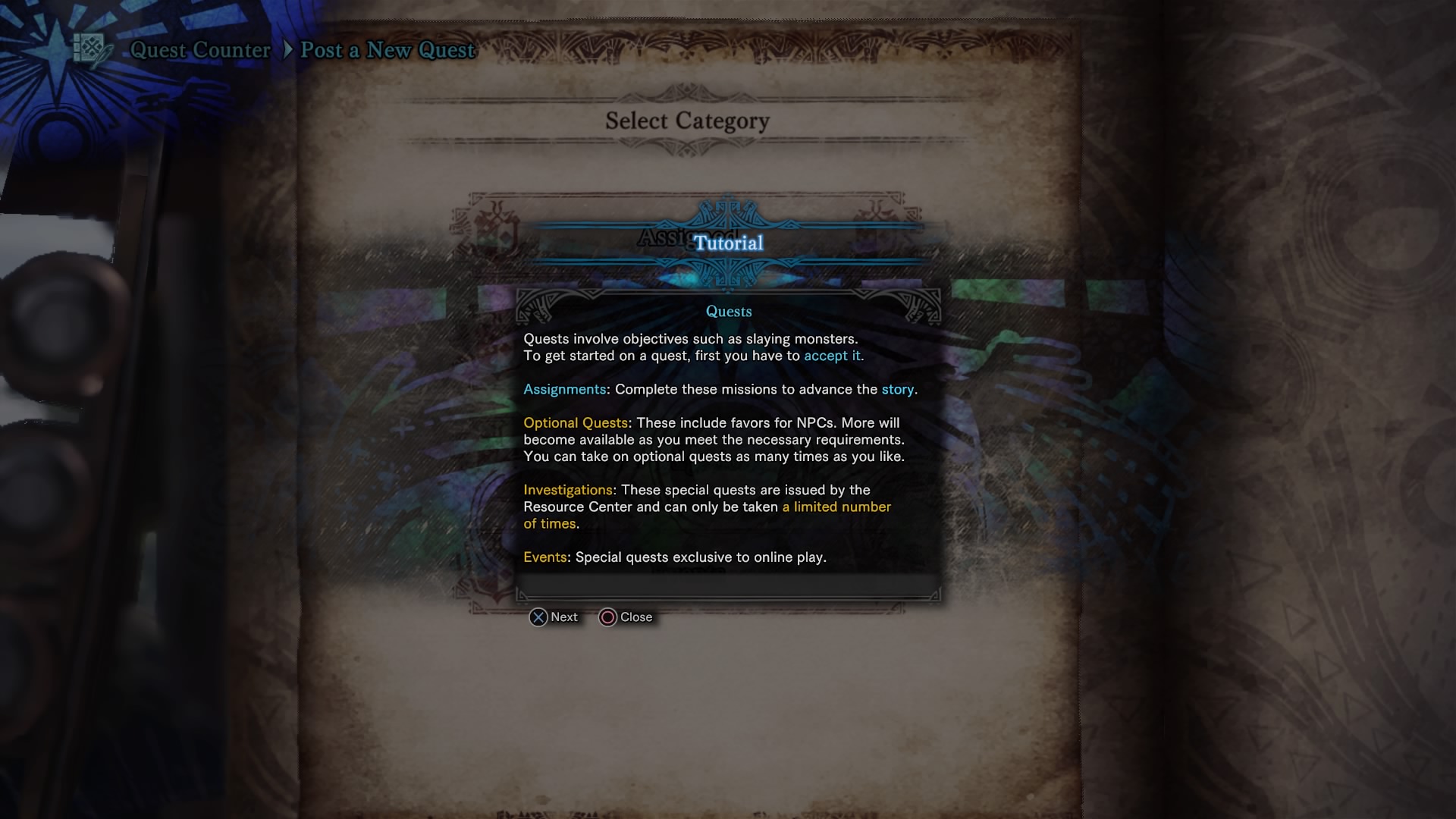 If there’s one thing Monster Hunter is good at, it’s giving you a lot of information and text at once. This can make you want to skip through it quickly and miss important details. Fortunately, World has fixed this by making tutorials simple pop-up boxes whenever you encounter a new mechanic. These are not only extremely informative, but are incredibly helpful for new players more than ever. Whether experienced or not, take the time to absorb everything the game tells you and if you forget something the tutorials are easily accessed through the menu for a refresher. Not to mention there’s a great opening tutorial that helps introduce some of the new mechanics and warm players up without thrusting them into immediate combat. 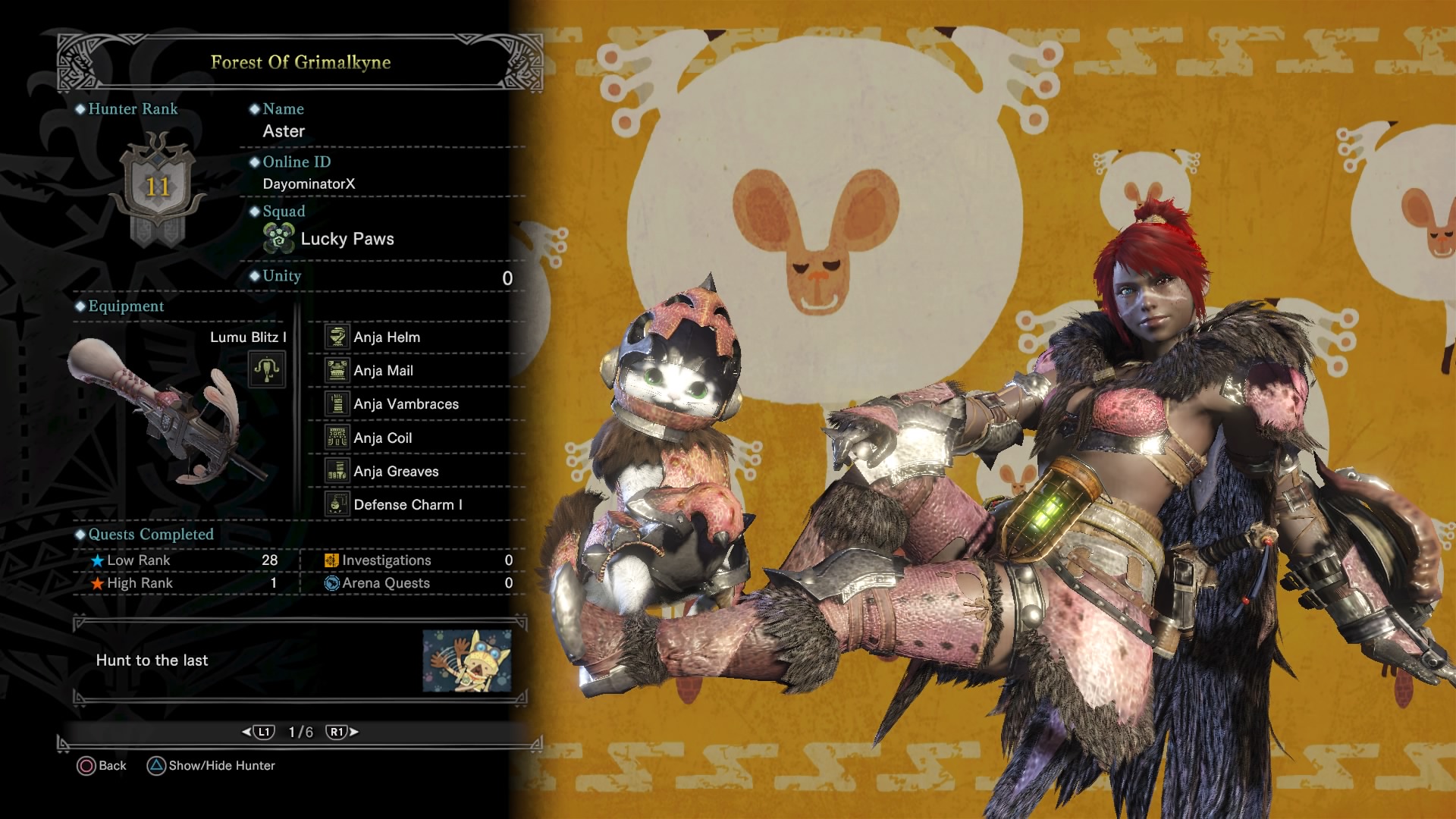 This feature is often times lost in the midst of going between gameplay, but Monster Hunter has a wonderful guild card system which allows everyone to show off their own charm. Guild cards allow players to give themselves a title, introduction and pose themselves with their palico on a nice background. Sharing these with other players tells them a little bit about you and your fighting style, in addition to sharing information on the weapons and armor of your choosing. Sharing guild cards is a friendly gesture to hunters you hope to run into again, and bragging rights for those who want to show off their brand new gear.

Want to Hunt with a Group? Join a Squad! 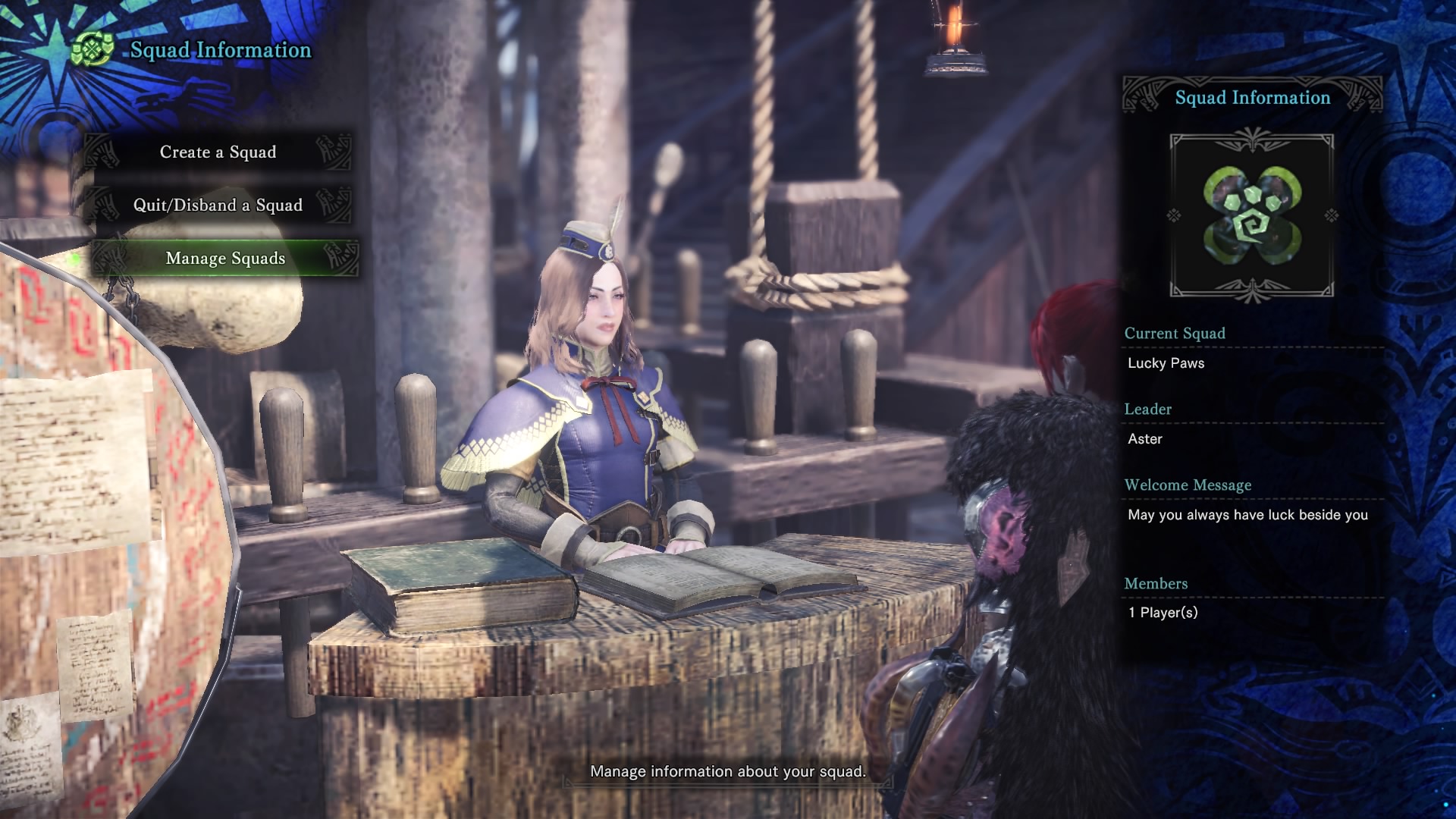 Squads are the newest way to play online with a group of people you really like. By going to the online area you can easily create your own squad complete with a name, icon and even sayings for the members. Invite people you enjoy hunting with to join and easily play with one another at any point while online. Each squad fits 50 members, but don’t worry about feeling left out of another person’s squad as you’re able to join up to eight! Join the squads you like and you’ll be fighting besides your fellow hunters whenever you like.

Want to play solo? No worries! 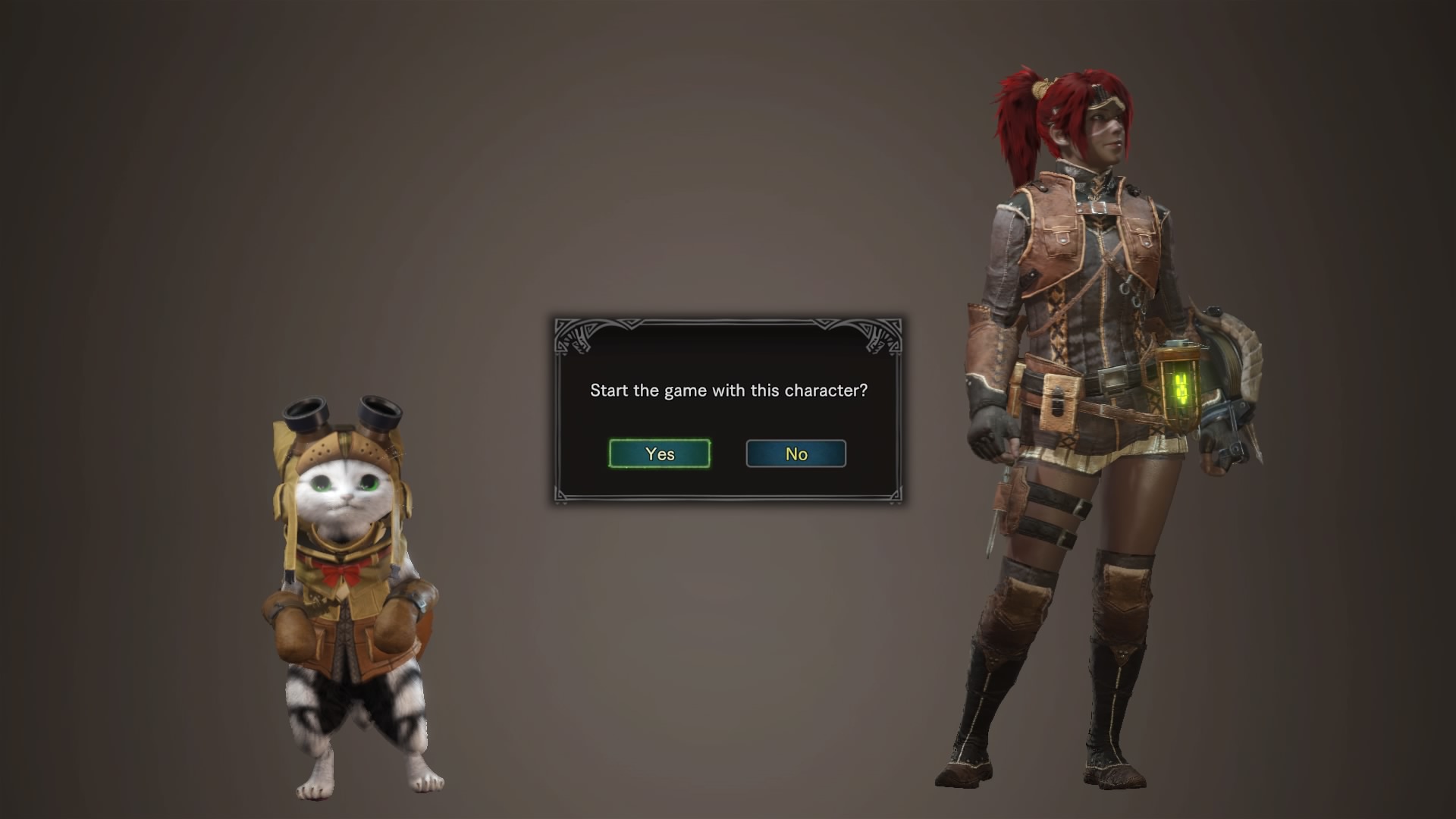 Unlike all previous entries, Monster Hunter: World does not feature a separate hub for single and multiplayer quests. All quests can be completed individually, or online with others. Quests are altered to accommodate up to four people by giving monsters more health when going into a hunt together, but if playing alone they are adjusted for just a single person. Don’t worry about having to play with others while feeling like the fight is taking forever due to increased health on monsters, it’s still just as full game when playing alone and can be thoroughly enjoyed as such.

Not sure what weapon to use? Try them all! 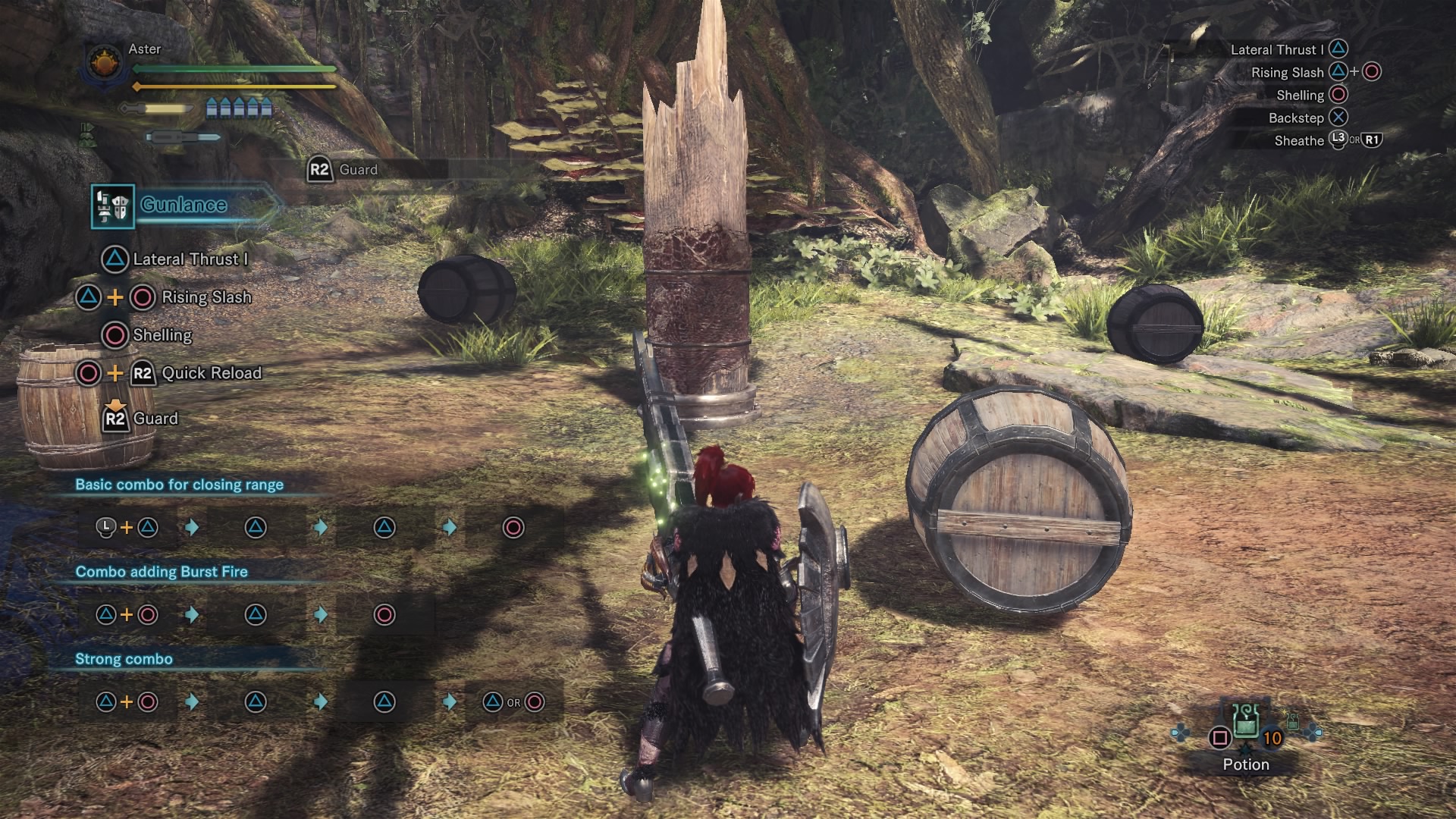 Monster Hunter: World starts you off with one of every weapon type, and even ammo for all the ranged weapon types. If you’re not sure which one fits you, take them to the training area where you can experiment to your hearts content and find the one that works best for your play style. The training area will also tell you the most common button combinations for appropriate weapons, and even let you practice swinging from vines and using your grappling hook. Even for more experienced players this makes for a great way to practice with all the new weapon attacks before taking it out on a real hunt.

Add Gear to Your Wishlist! 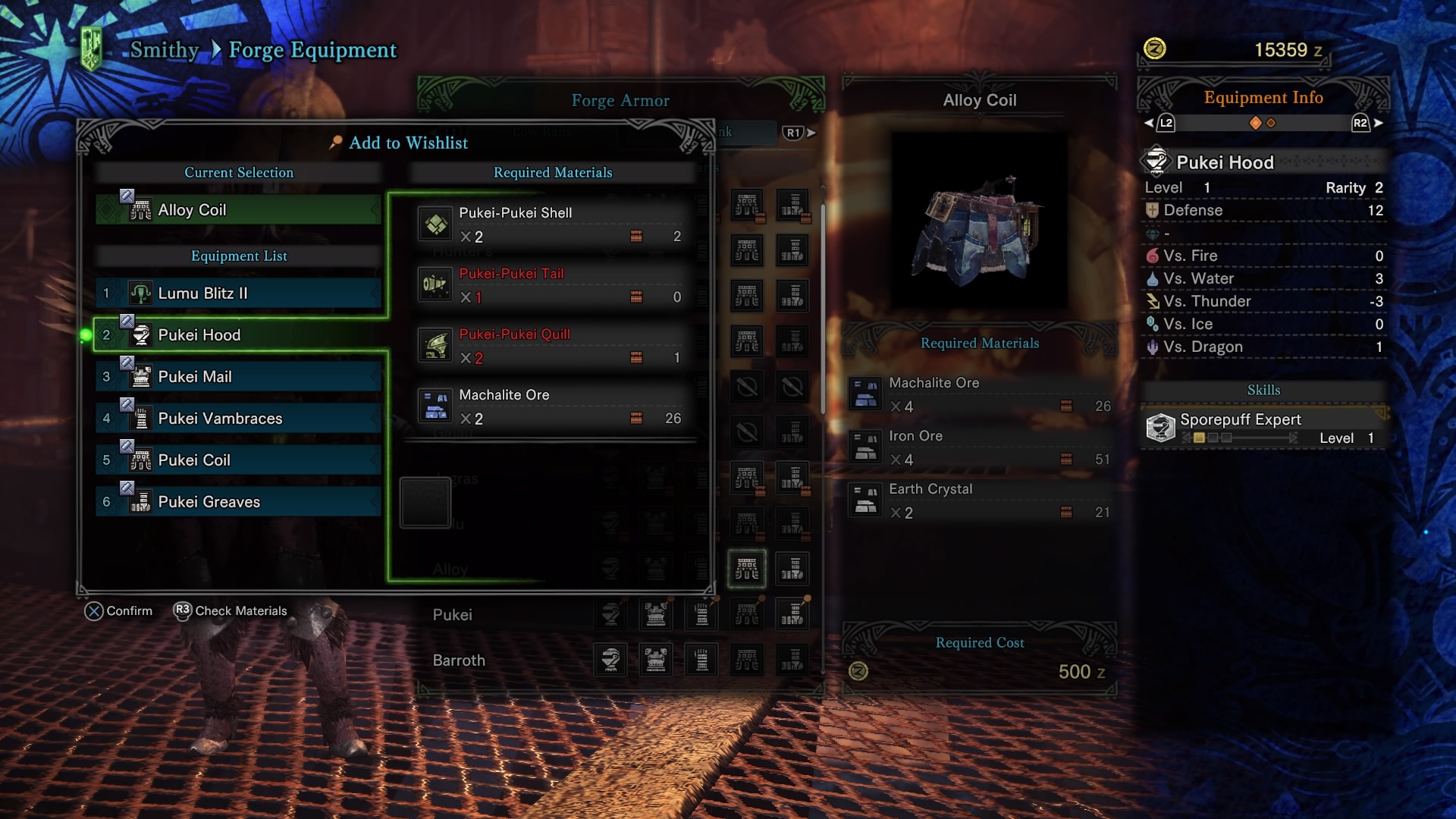 Want to build that Rathalos armor but need a few more parts and certain stones? You don’t need to scribble down all the materials you need on a piece of paper, World has a new Wishlist mechanic that makes keeping track of items you need much easier. While in the workshop, just hover over the weapon or armor you’re interested in and add it to the wishlist. This will give you a pop-up to the side of the screen letting you know when you’ve gathered all the materials for it. You can add up to six pieces of equipment to your wishlist, which could be an entire armor set and weapon.

Take on as Many Bounties as you Can 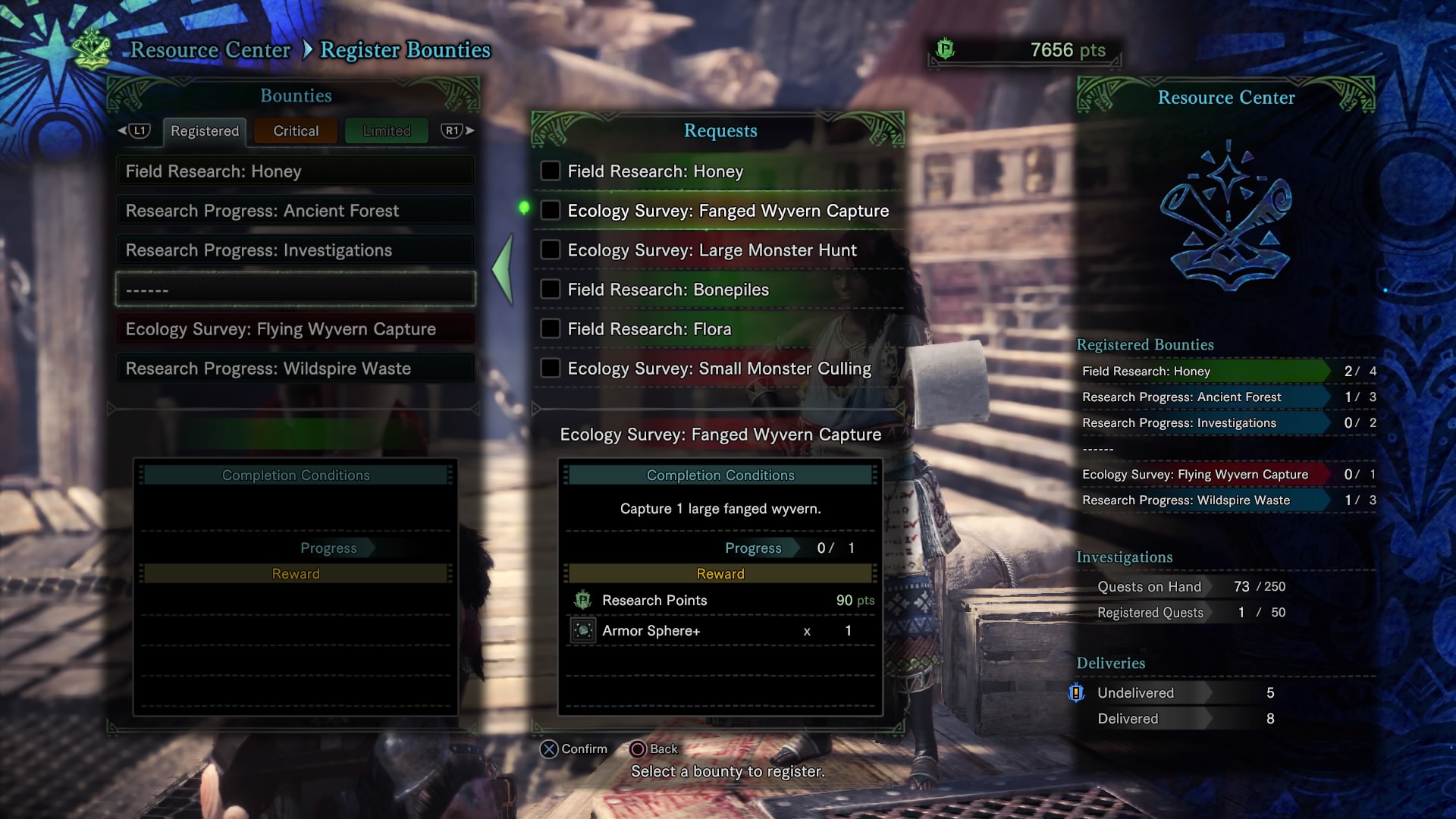 Bounties are a bit like mini fetch quests, except instead of having to go out and hunt down 10 blue mushrooms in their own quest, to complete it all you may have to do is simply gather ten different kinds of mushrooms in any quest you choose and be rewarded for investigating these spots. You won’t just be gathering items either, as sometimes these bounties require you capture or kill certain types of monsters. After completing one, don’t forget to turn it in and grab another. The rewards are typically armor spheres, making it the easiest way to collect them and bulk up that armor set you’ve been working on.

Expeditions are More than Free Hunting 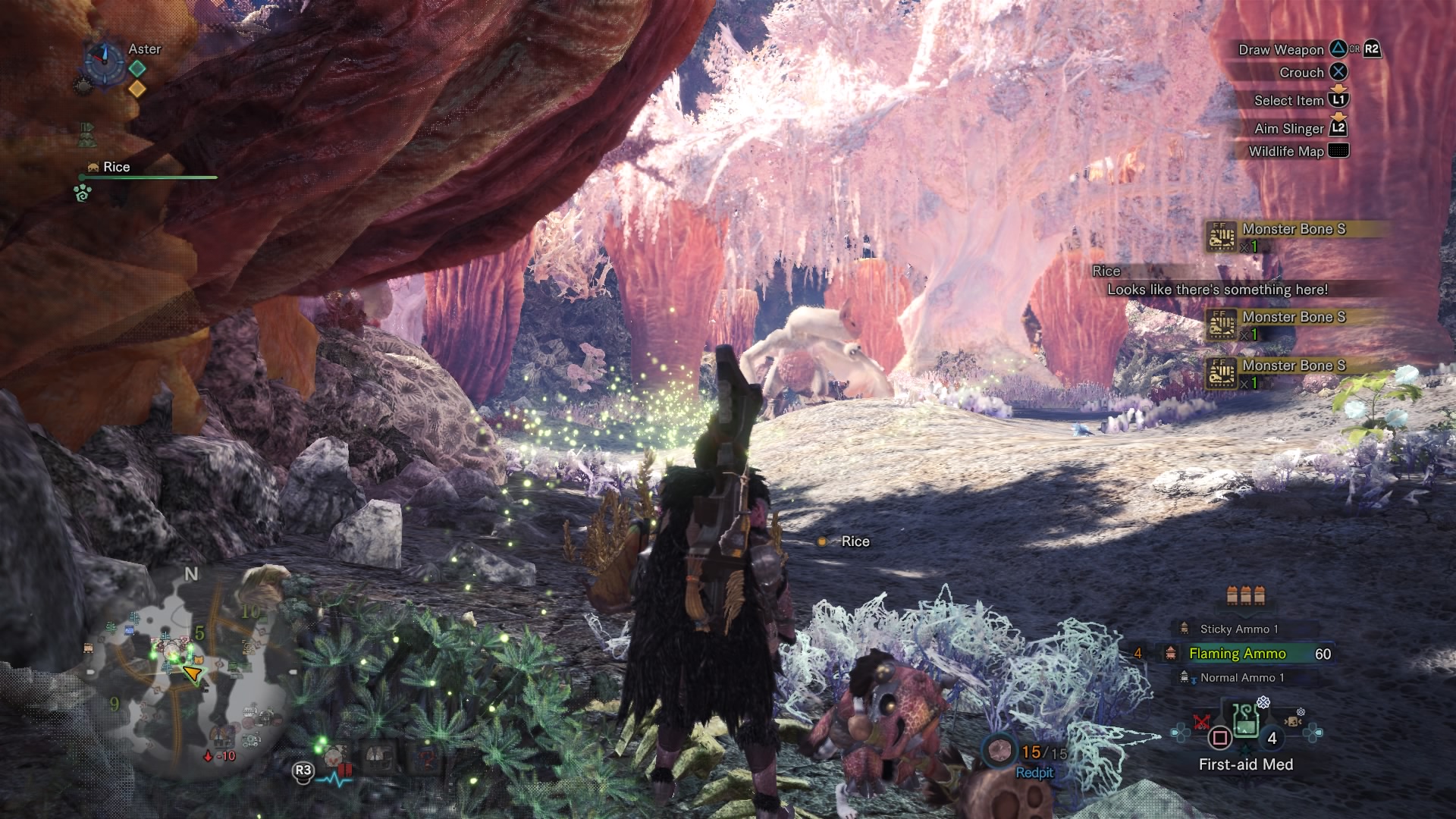 In the past, expedition styled free hunting was used to take down extra monsters and gather a few items while there. This time around expeditions offer a lot more to be discovered. Not only can side missions be uncovered during them, but exploring here is the best way to find wholly important camp sites in order to use during other missions. Take the time to run around seeing what it has to offer, maybe find a new shortcut or two and take down a monster while there. There’s no limit on getting knocked out either so don’t worry about getting bumped around, you’ll hop right back up and get in there. 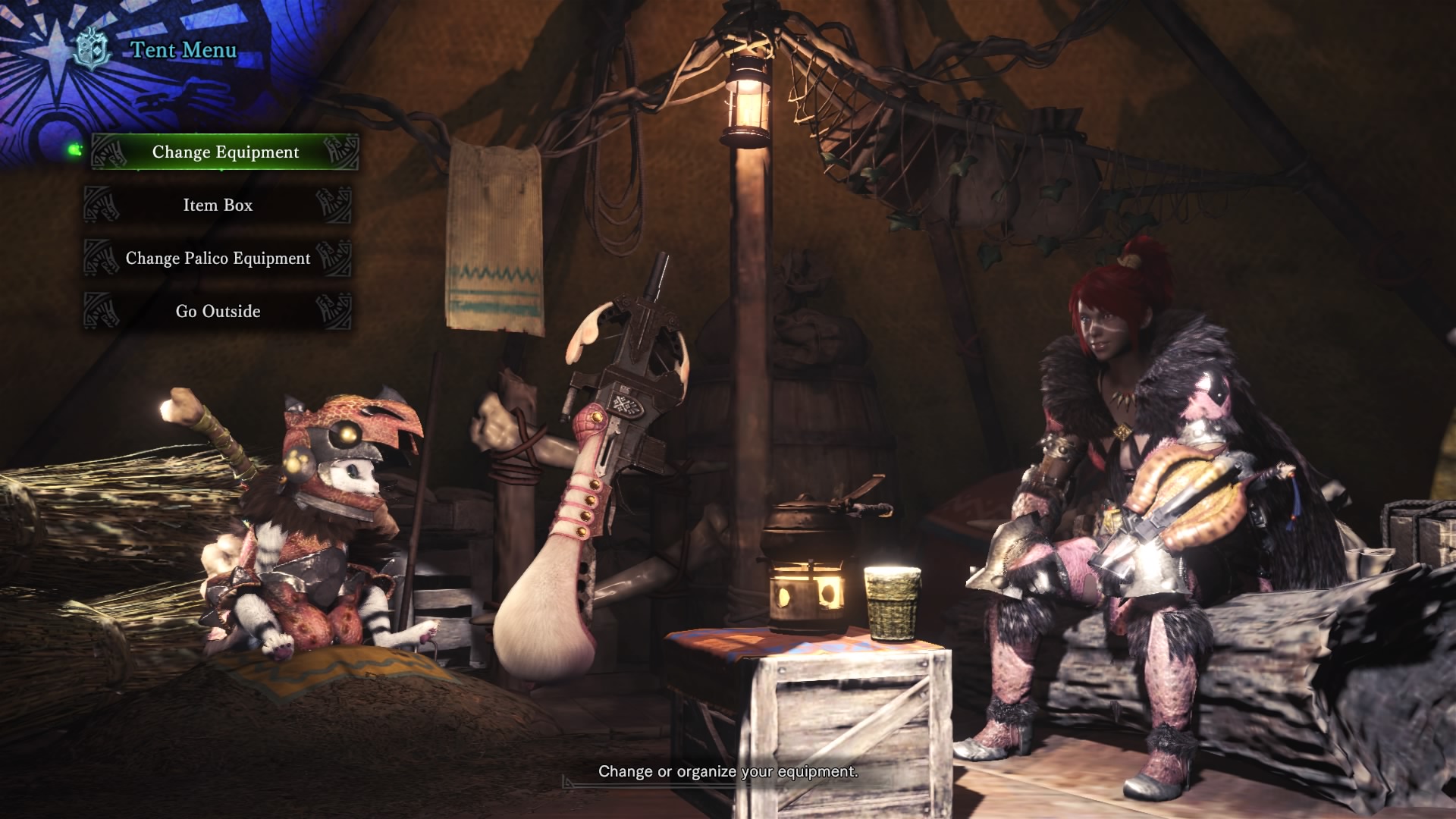 Did you accidentally start a mission with a fire weapon when you were planning to use ice against Diablos? There’s no need to restart the quest, you have everything you need right at the camp. Head into the tent beside the handler and you’ll be able to not only change weapons but also grab additional items, ammo and anything else you might need. Remember you can always fly back to camp at any time you’re not in combat too, so if you’re finding that the weapon you did choose still isn’t strong enough you can go back and swap at a moment’s notice. If you forgot to eat before starting the mission you can also sit down and have the handler cook a meal for you and give that extra little boost to get into the hunting spirit. 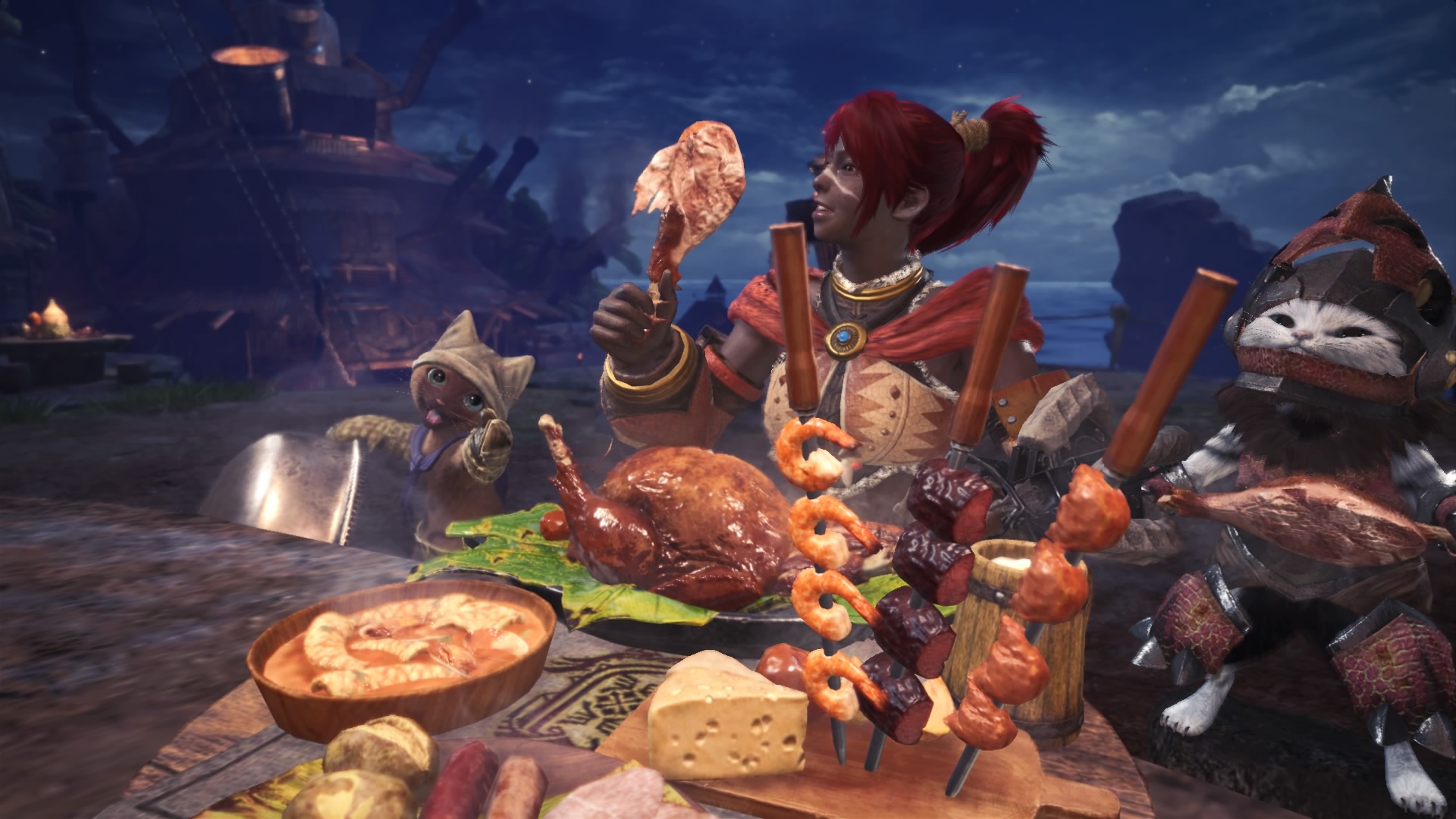 At the beginning of the game you’re tasked with making a Palico to be your companion. This furry fellow will help you out during missions by working as a distraction to the monster, in addition to having some items he’s ready to toss your way in order to help. They start with a useful Vigorwasp Spray which will heal you quite a bit in the beginning. If you help your Palico seek out other wild cats while exploring, they might just supply it with some extra useful items to use. Just remember your Palico only joins along if there are two or less hunters, so don’t depend on it to be there all the time!

Did you Play the PS4 Beta? Grab your Bonuses! 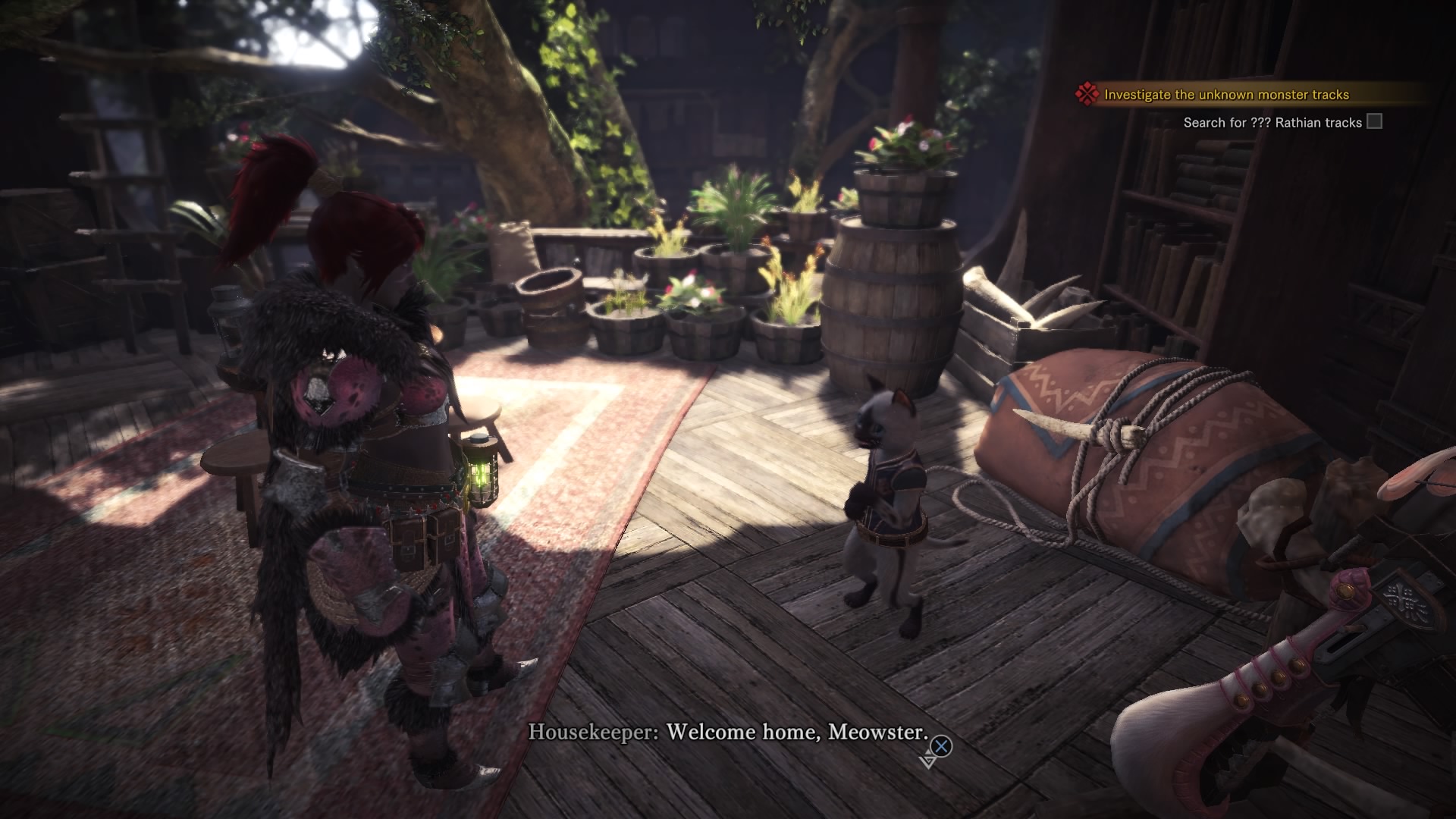 If you played the beta sessions on PS4 before release and completed any of the quests, you’ll have a variety of items waiting for you. In order to claim them, go into the room that’s marked as yours and talk to the housekeeper felyne to collect them. Depending on the missions you completed in the beta you’ll have a few different sets of items, and even monster drops, to start you out. These will be helpful early on before you have the items to make them yourself, so grab a few and head out there!

Hopefully a few of these tips will help you on your journey into the new world. There’s a lot of fierce monsters ready to get in your way and it’s best to prepare as much as possible for the long journey ahead. Whether new to the hunt or an experienced veteran everyone can use a refresher now and then. It’s almost time for the hunt to begin so sharpen your hammer, load up your bowgun and get out there to take down the biggest of them all.