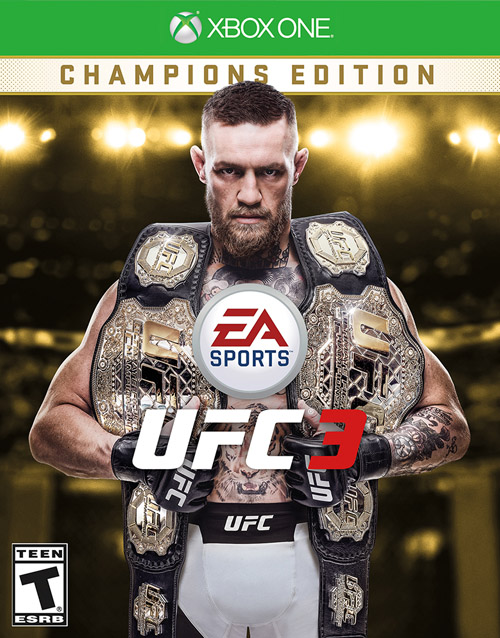 While EA Sports is most known for their annual sports franchises, such as football, hockey and soccer, there’s one license they have elected to go biennial. The fastest growing sport originally was given to THQ back in the day, but when the company went under in 2012, Electronic Arts quickly snagged the license. Ever since then, we have been treated to some rather unintentionally comical releases. There’s nothing like seeing your opponent doing literal flips inside the octagon when you slug him with a hook or a head kick. While the last two entries have been a tad flawed in their execution, mainly due to being buggy and shallow in numerous places, the Vancouver-based studio is looking to take another swing at it, this time introducing a revamped career mode and Ultimate Team – the latter hopefully not falling into the trap of poor microtransaction implementations similar to other EA releases as of late. At least you’re able to pick your favorite fighters in an incredibly diverse roster, exceeding 250 (although that’s somewhat fluffed with characters in multiple weight classes). Ittttttttt’s time to find out if it was worth the extra year wait.

If you’re familiar with the core gameplay aspects of the past couple of games, you’ll feel right at home with UFC 3. There are even more combinations options than ever before, with most of the triggers acting as modifiers when multiple are held down. Because of this, UFC 3 is far more skill oriented than all of it predecessors, with combos being more difficult to pull off and heavier strikes being slower. For the most part, this is better because it resembles that of real matches; it’s mostly thanks to the animation flow being more consistent and realistic, giving an authenticity to gameplay. Outside of that, not a lot has changed from what we got two years ago. Grappling is almost overpowered at times, being easy to transition, but difficult to get out of on the bottom, and the submission game is still less than ideal. Granted, it’s difficult to properly convert chokes and limb-snagging moves to a control scheme, but the current implementation remains rather unintuitive and messy. You are offered an “easy submission” option in specific modes, but that merely comes down to who can tap a face button the fastest. 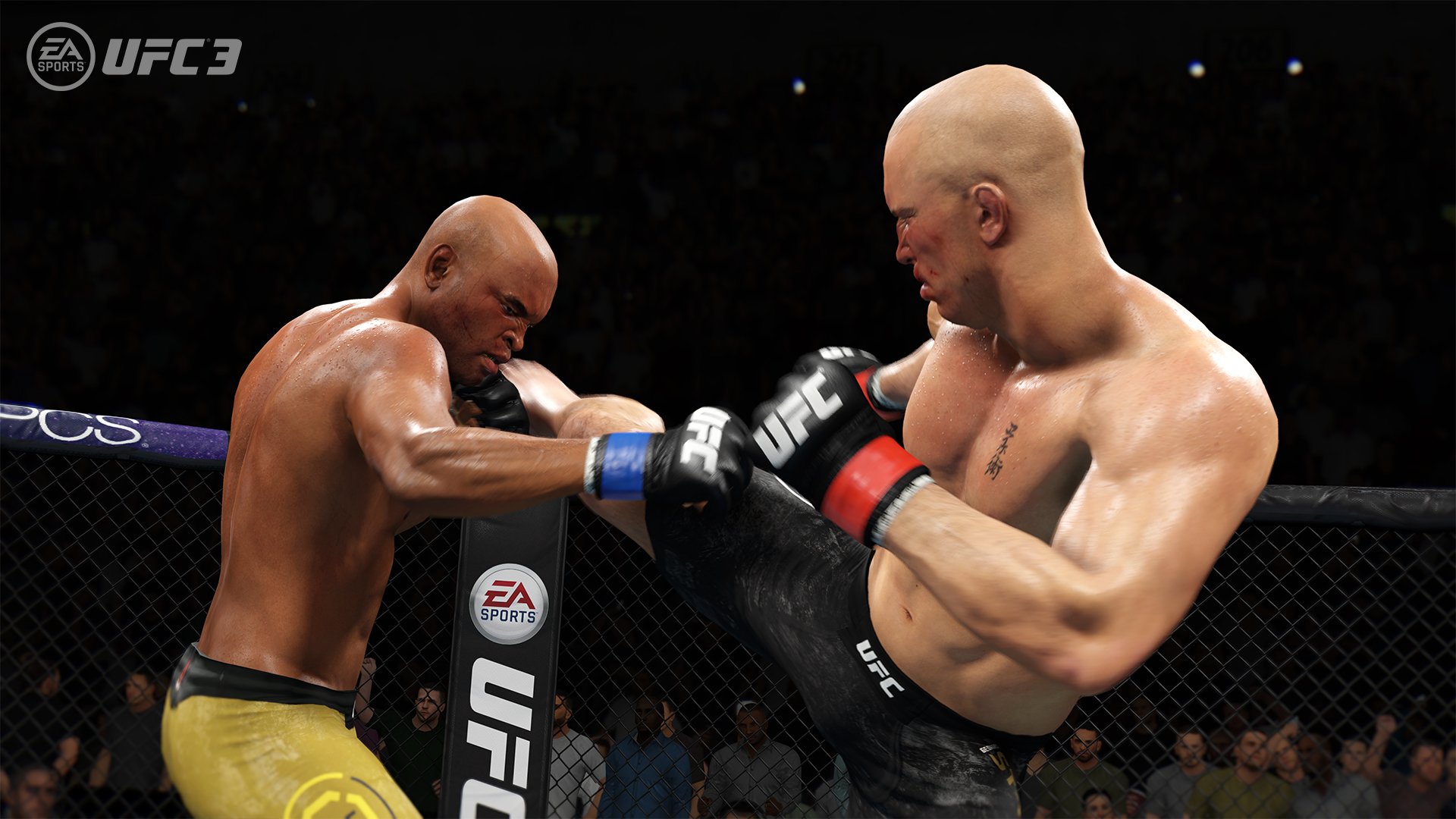 Making a return is the career mode and it’s flashier and more chaotic. Lightweight Champion Conor McGregor’s influence can be felt enormously, with the final objective being capturing two belts in two different weight classes without your consent. More than anything, it’s as if you’re in for the ride rather than crafting your own rags to riches story. You don’t get any choices with the exception of minor opponent options sprinkled throughout. It’s as if your path is set for you from the get-go, whether you like it or not. The social media presence and choices are also inconsequential and almost silly at times, to the point you’ll begin to question what’s the point of everything going on. It also has the problem of fighters retiring later in your career, so you’ll see numerous auto-generated characters with low stats. At this point you’ll have no desire to continue. In the end, the Career mode almost feels like an afterthought; even though it lets you build up a character (custom or from the huge existing roster) from the bush leagues into the UFC, it’s less appealing than what we got a couple of years ago. At the very least you don’t have to play those monotonous and rather discouraging mini-games to build up your stats, which is a monumental improvement.

Obviously the biggest attraction to any EA Sports game is their Ultimate Team leagues. With UFC 3, we get a similar mode with some slight modifications. The main addition is the ability to obtain real fighters and not force you to use created characters (provided the RNG Gods are in your favor). This also ties into one of the aspects a lot of players seem to be divided on: microtransactions. I’m happy to report as of this review that the pricing structure seems reasonable, at least for the in-game currency that can be earned without having to open your wallet. The actual cash purchases are standard, which are about two dollars for a premium card pack (because the basic card pack just isn’t enough). I would not advise this at all because you can earn a premium card pack in no time by simply playing the offline or online features. You’ll go up divisions based on your performance, fight stronger enemies and potentially earn more. At the end of it, it took us roughly seven fights before we could afford a good card pack, most of which can be quickly completed. Ultimate Team is something to keep players hooked, and while it’s the core mode that features microtransactions, it’s more entertaining than your traditional online modes, giving you more compromised (at least stat-wise) fighters. 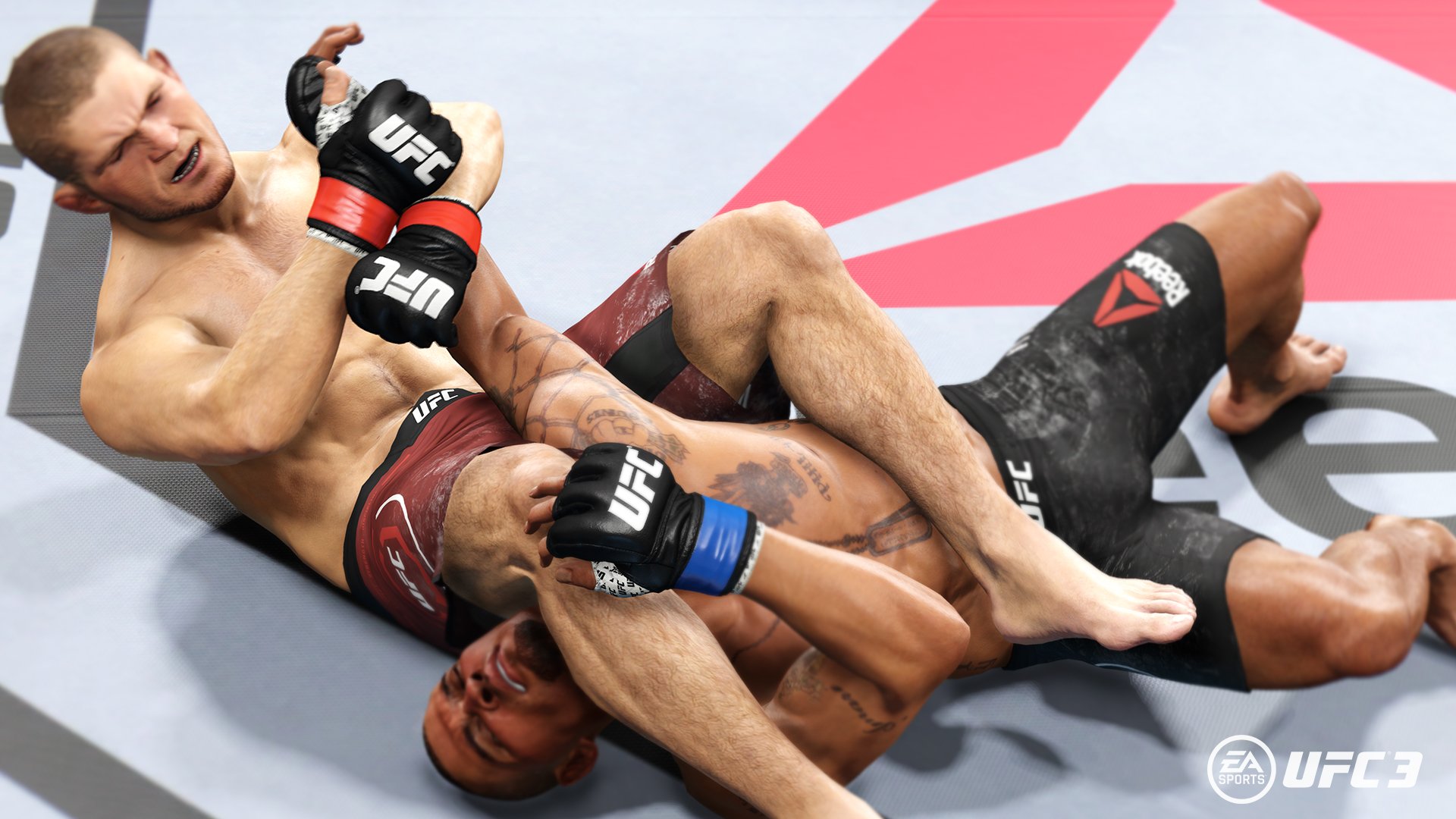 Outside of the career and Ultimate Team, Knockout Mode also makes a return, but in one of the most embarrassing ways possible. This was one of our favorite modes back in 2014 because it ensured a spectacle of a knockout no matter what. While that’s still here in all its glory, Snoop Dog is commentating over it. While that sounds great in theory, the VO from Snoop Dog is one of the most phoned performances you will ever hear and you’ll want to turn off the audio quickly. Outside of the traditional modes, we also have Stand and Bang and Submission Showdown, which essentially equate to a kickboxing match and a Brazilian Jujitsu match. Stand and Bang is a more than welcome addition, especially showing off the more fluid combo system, but the Submission Showdown could use some work, namely adding more time to a match instead of having a single three-minute round. It does go to a tie breaker afterwards, which basically gives the more dominant fighter first chance to submit his opponent, and then swapping if he’s unable to do so, but even then, it’s not a great solution. Ultimately, it’s a good idea in theory that’s not well executed. Finally, there’s an offline Tournament mode which is barebones and does what it sounds like: eight or sixteen fighter brackets where the winner takes the belt.

EA Sports UFC has always looked spectacular, with strong skin deformation and fluid animations. As previously mentioned, the animations in UFC 3 are on a whole other level, while sporting some faults. It’s not as buggy as it once was, but there are some questionable animations found throughout. For example, we saw numerous occasions, be it versus a computer or a person, where someone who is badly staggered and hits the canvas is able to immediately hop up like nothing happened. It just looks so unnatural and sometimes faster than a normal human can get to his feet, regardless if they’ve been stunned. Outside of that, the visuals themselves can look borderline realistic thanks to some strong lighting techniques in certain areas, such as sparring in a gym. Now, UFC 3 isn’t a massive leap in visual quality like the UFC 2 was to its predecessor, but the overall tech has improved with flesh, cuts and blood looking better. One aspect of the game EA Sports just can’t get right, with the exception of real characters, is hair. While the physics are some of the best in the business, eyebrows and facial hair looks off-putting when creating a character. Unfortunately, we also ran into some technical issues, at least on PlayStation 4 (Pro), where there might be a memory leak. On two separate occasions, while running the game for an extended period of time, fights gradually became slower and slower to the point where we were slugging it out in slow motion. In the end, the visuals are more stable than they once were, but there are still a number of issues that need to be ironed out. 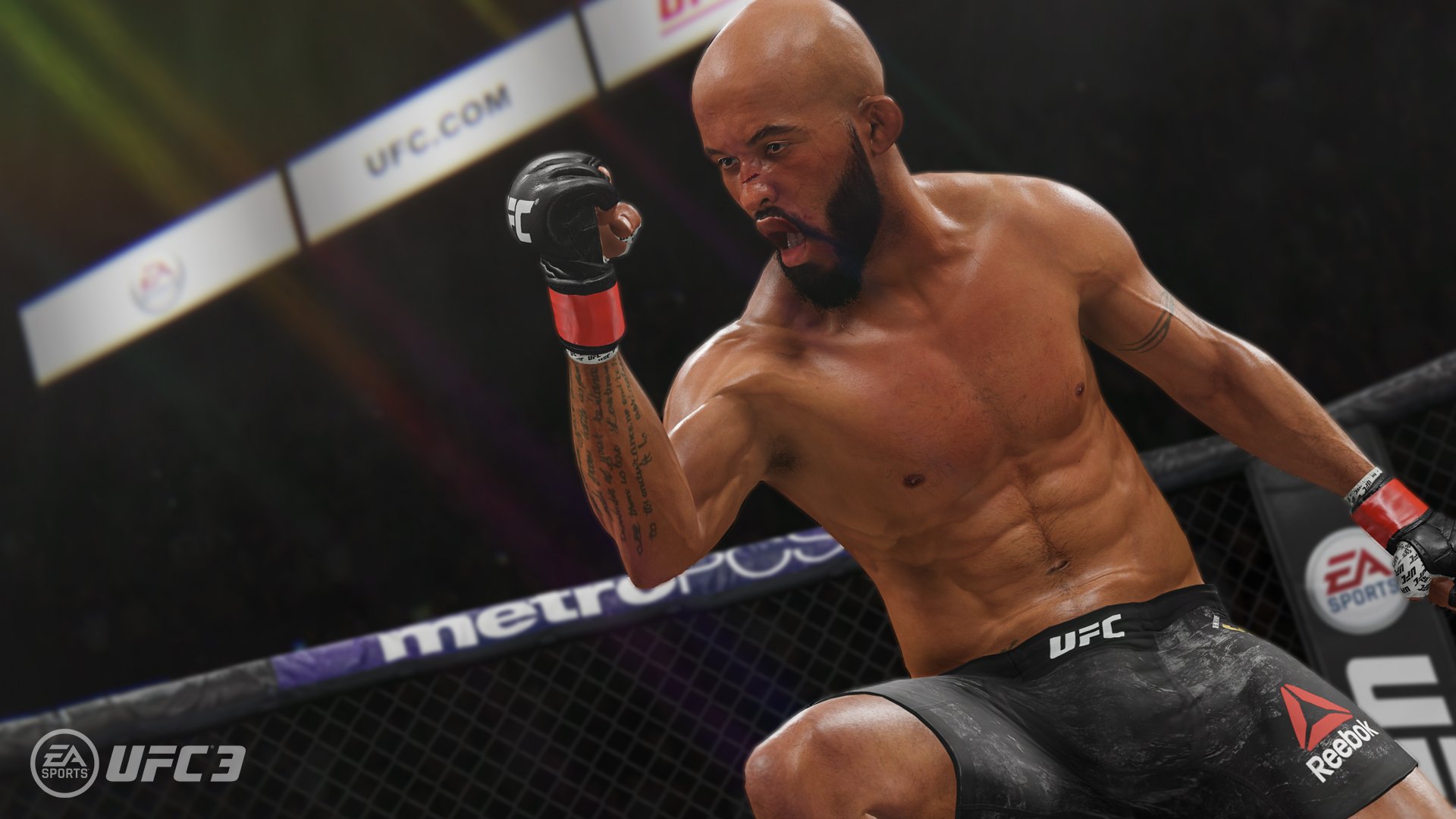 Fans of the sport will get a kick out of EA Sports UFC 3. While the career mode is lacking the expected pizazz, and can be a grind later into your story, the Ultimate Team offers an engaging online component that can be played for hours on end. Sure, it does have a loot box implementation (or card packs in this case), but the amount of in-game currency earned from each fight is properly balanced so you won’t feel cheated, especially considering you can earn them offline. The core fighting mechanics are retained and they’re smoother than ever thanks to an improved animation system that accurately replicates real motions with one exception: grappling and submissions. While it’s difficult to emulate both defending and pulling off a neck cranking or arm breaking submission, the current set-up is less than ideal and just cumbersome. In addition, while Stand and Bang is a solid inclusion, the Submission Showcase and Tournament modes are barebones. Fortunately, this is one of the more stable games in the franchise with only a couple of technical bugs and awkward, robotic animations to be found. In the end, while EA Sports UFC 3 is an incremental upgrade to what came before it, it’s still a more polished and balanced experience.