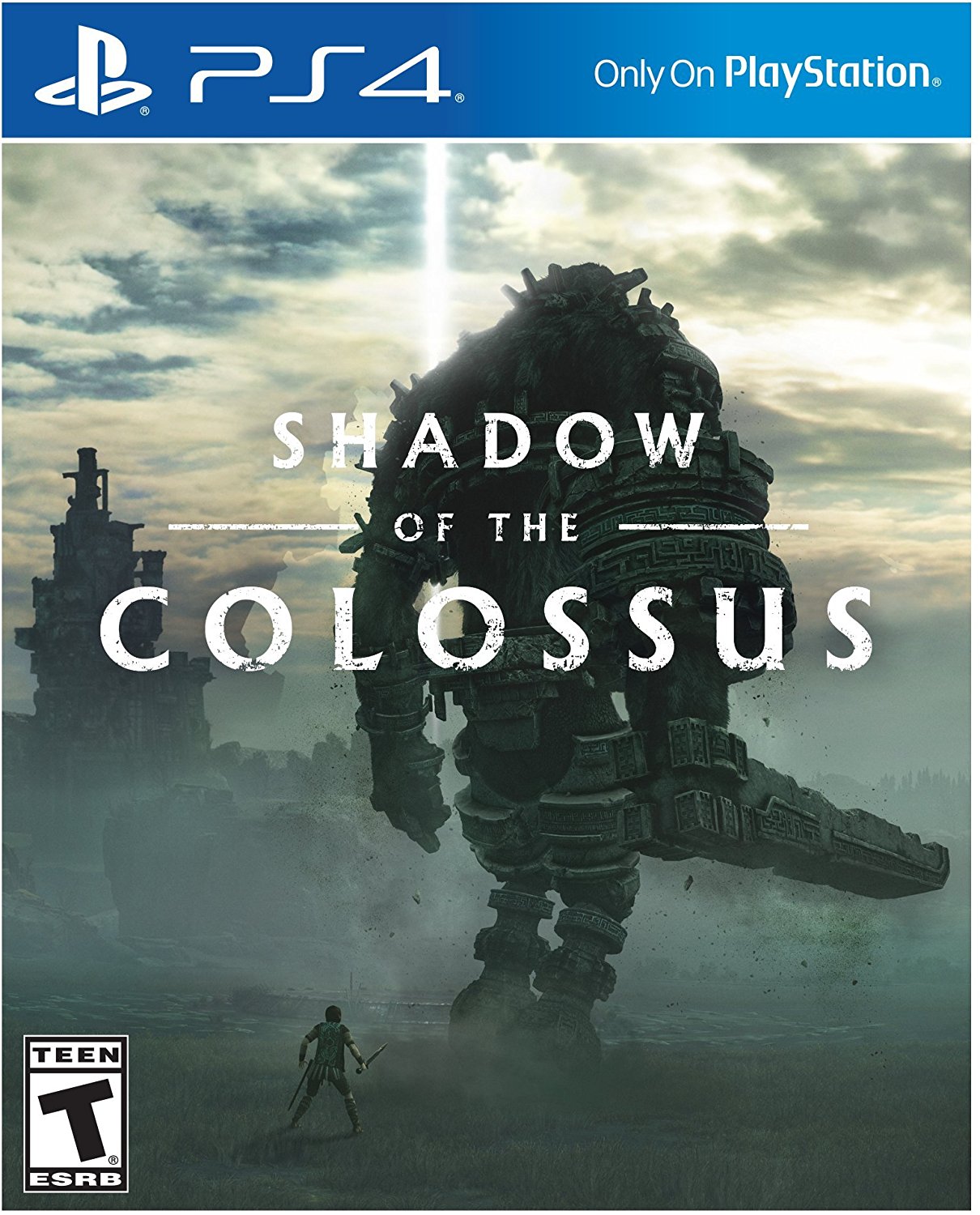 Shadow of the Colossus

Ever since its original release in 2005, Shadow of the Colossus for the PlayStation 2 has become a key piece of evidence in judging video games as an art form. Its grand vistas, cinematic camera angles, melancholic storytelling, sense of epic scale and ingenious game design all bled together to create a moving and altogether unforgettable experience. Shadow of the Colossus, the new remake by Bluepoint Games made from the ground up for the PlayStation 4, retains all those qualities set by the original release, and manages to iron out many of the original’s kinks in the process. The end result is a gorgeous, deeply-affecting game that shouldn’t be missed by old fans or newcomers itching to see what all the praise has been about.

The protagonist, known simply as Wander, enters the “Forbidden Lands” on horseback, carrying the body of Mono, a beautiful young woman who was cursed and killed in her prime. After laying Mono down on a sacred alter, an ominous voice tells Wander that in order to resurrect her, he must slay the sixteen massive beasts known as Colossi that roam the Forbidden Lands. It’s a simple yet mysterious story and one that fans are still parsing over to this day in an attempt to uncover its finer details. This basic tale remains untouched in the remake, though it does come to life with detailed character models and a gorgeously-realized world.

The sixteen titular Colossi are designed as living, breathing puzzles. Figuring out how to climb and take down each one is unique and exhilarating. Some fly ominously in the sky while others charge around recklessly, making it difficult for the player to ascertain the best way to grab on to their fur and begin searching for their glowing weak spots. Wander has a sword and a bow at his disposal, both necessary throughout the game to weaken, distract or get the attention of the Colossi. Wander has a health meter that can be whittled down by nasty falls or particularly aggressive blows, but what’s more of an active concern is his grip gauge – a circle that slowly wanes as bosses attempt to fling Wander off their bodies. If this gauge empties, Wander falls to the ground and has to tackle the boss’ natural puzzle from the beginning. 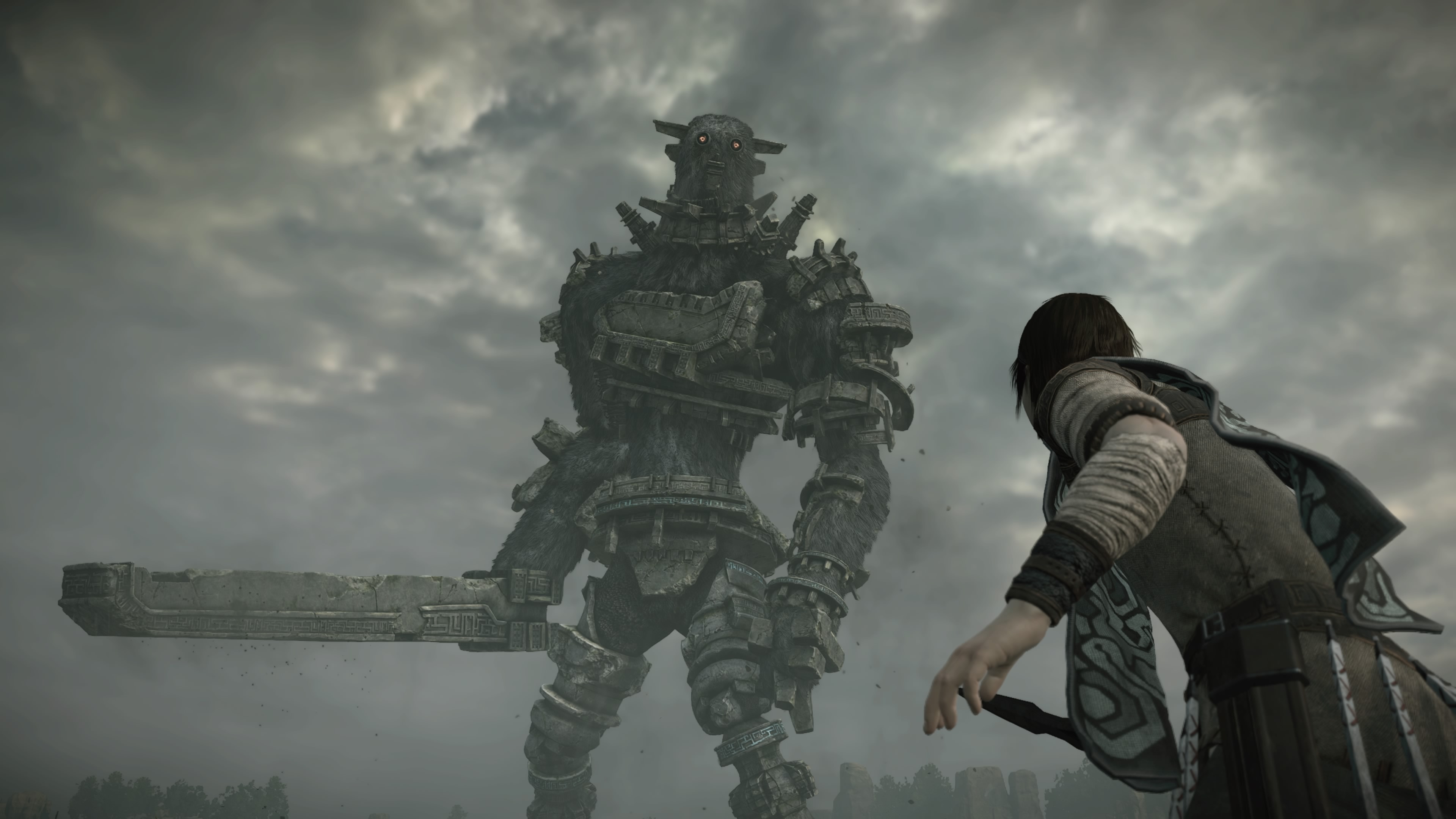 Though the Colossi are the sole enemies of the game, there’s smaller collectables strewn across the Forbidden Lands for Wander to gather. White-tailed lizards can be struck with an arrow and their tails consumed to enlarge Wander’s grip gauge, while fruits can be eaten to extend his health bar. The remake has added mysterious coins that make noises reminiscent of The Last Guardian: the final game that Team Ico ever worked on. At this point, it’s unclear exactly what these coins are used for, though tracking them all down will surely keep returning fans occupied for quite some time.

The core gameplay remains perfectly persevered, but the original game had numerous rough spots. Its controls were obtuse and unwieldy, the camera seemed to have a mind of its own and the PlayStation 2’s framerate often chugged along while attempting to handle the complex Colossus mechanics. Luckily, these issues have been extinguished by Bluepoint Games (the same team that worked on the Ico and Shadow of the Colossus remasters for the PlayStation 3). There are now four controller layouts, including the original mapping and some more sensible refinements. Climbing the Colossi is also significantly less frustrating in general – sure, their major sweeping motions are still liable to keep Wander from making his final blow, but smaller movements don’t faze him nearly as often, and the end result is a much more enjoyable experience. The camera in the original game had a keen eye for cinematics, but didn’t always play nice when tackling the sixteen beasts. Now it follows along at a consistently friendly distance, and manages to make the game even more grand and opulent by finding the perfect angles to showcase its inherent beauty. Over the brief campaign (it’ll take most players between five and eight hours to complete) there wasn’t a single noticeable framerate drop – a considerable feat, considering the obsessive attention to detail put into this remake. 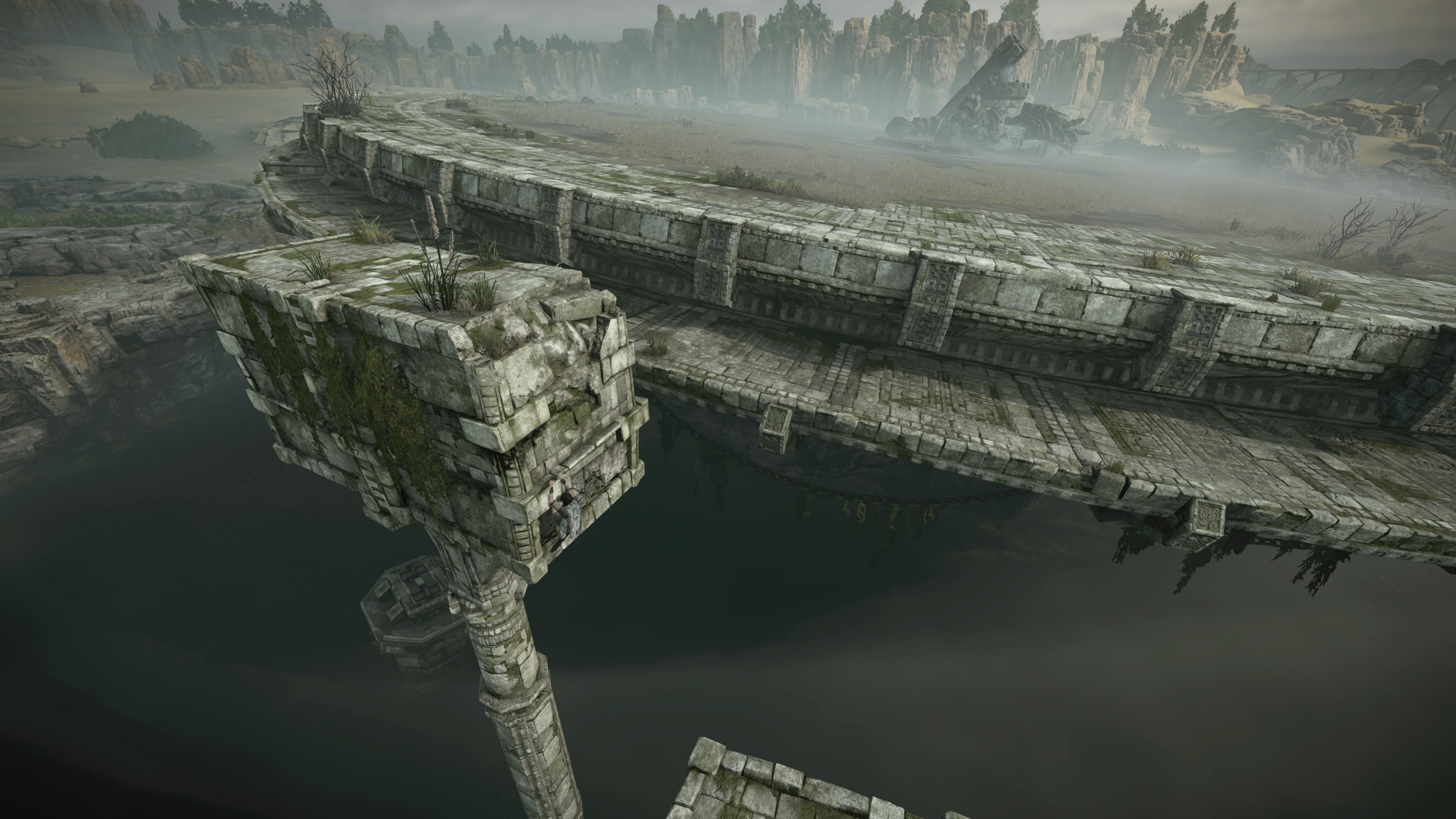 Although the original Shadow of the Colossus was gorgeous in its own right, Bluepoint Games has outdone themselves, creating every graphical asset from the ground up. Colossus fur ripples in the wind, small sand flurries kick up and die off beautifully in the desert, cliff walls off in the distance are intricately detailed and the entire game has a surprisingly handcrafted feel to it. Although much of the Forbidden Lands is open space that’s quickly passed over during each journey to a new Colossus, Bluepoint Games make every inch of the world shine. They employ modern techniques, like dynamic depth of field, volumetric fog, motion blur, dynamically generated fur on each of the Colossi and more to make the proceedings as visually pleasing as possible. The original was breathtaking for its time, but it utilized a relatively murky aesthetic, largely due to technical limitations. These restrictions are gone and so are the muddy visuals and the remake is all the better off for it.

The game runs at 1080p/30fps on a standard PlayStation 4, but PlayStation 4 Pro users can choose between a Cinematic Mode that runs in 4K at 30fps, or a Performance Mode that runs at 1080p/60fps. HDR makes a much bigger impact here, however, as green foliage, yellow sunbaked sand and peaceful blue waters all pop out of the screen vividly, so long as the player has an HDR enabled display. The result, regardless of which mode is being used, consistently makes the player stop to take in its sweeping vistas, quiet forests and imposing mountain ranges. The only common technical shortcoming that appeared in the game were some asset pop-ins while riding Agro across grassy fields — it never detracted from the game, but it was noticeable. Between the way it looks and runs, Shadow of the Colossus almost feels like an entirely new game, though a few new bells and whistles have been added as well. 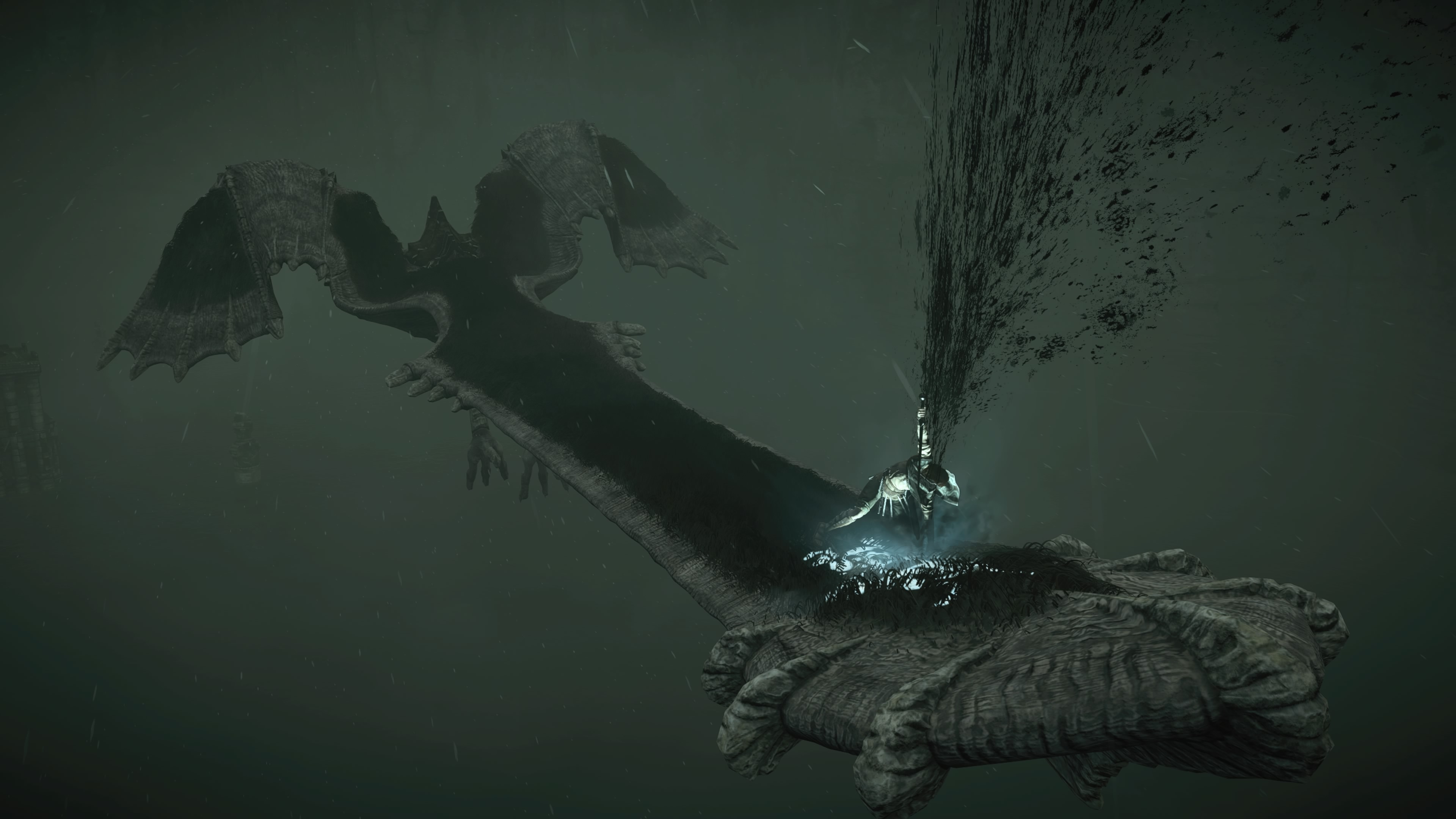 The photo mode is one of its most compelling features. At any point, a button can be pressed to pause the game completely. The camera can be rotated around Wander or his horse Agro, pulled in and out or tilted to the heart’s desire; the lighting, tone, color quality and more can be customized for a highly-controlled, expertly-executed photo. These features are common in most photo modes, but the shots that can be captured during the middle of a Colossus ascent, while riding Agro at breakneck speeds or even while lazily kicking up spring water in a pleasant meadow are liable to make the player stop for a moment and take it all in. Finding a bad angle or spot to take a photo is much harder than finding moments that stun with their epic grandeur.

For better or for worse, visual upgrades, technical improvements and the photo mode are the only major changes made to the core game. Team Ico famously left various Colossus designs on the cutting room floor during the making of the original and many fans were hoping to see some come to life in this remake. Unfortunately, the sixteen original Colossi remain the only beasts in the game. Adding more of them in could have padded out the relatively slight playtime, but like the original, there are various post-game features to keep players going long after the credits roll. There’s a New Game + mode that allows Wander to start the journey from the beginning with all the health and grip improvements he gained from the first go around. Players can replay each Colossus one-by-one in a timed mode – beating each one under a certain time can yield extremely interesting items for Wander to use in subsequent playthroughs. There are also three difficulties present at the outset — easy, normal and hard — and they change the number of weak spots each Colossus has to stab, as well as their overall health and the damage they can deal to Wander. 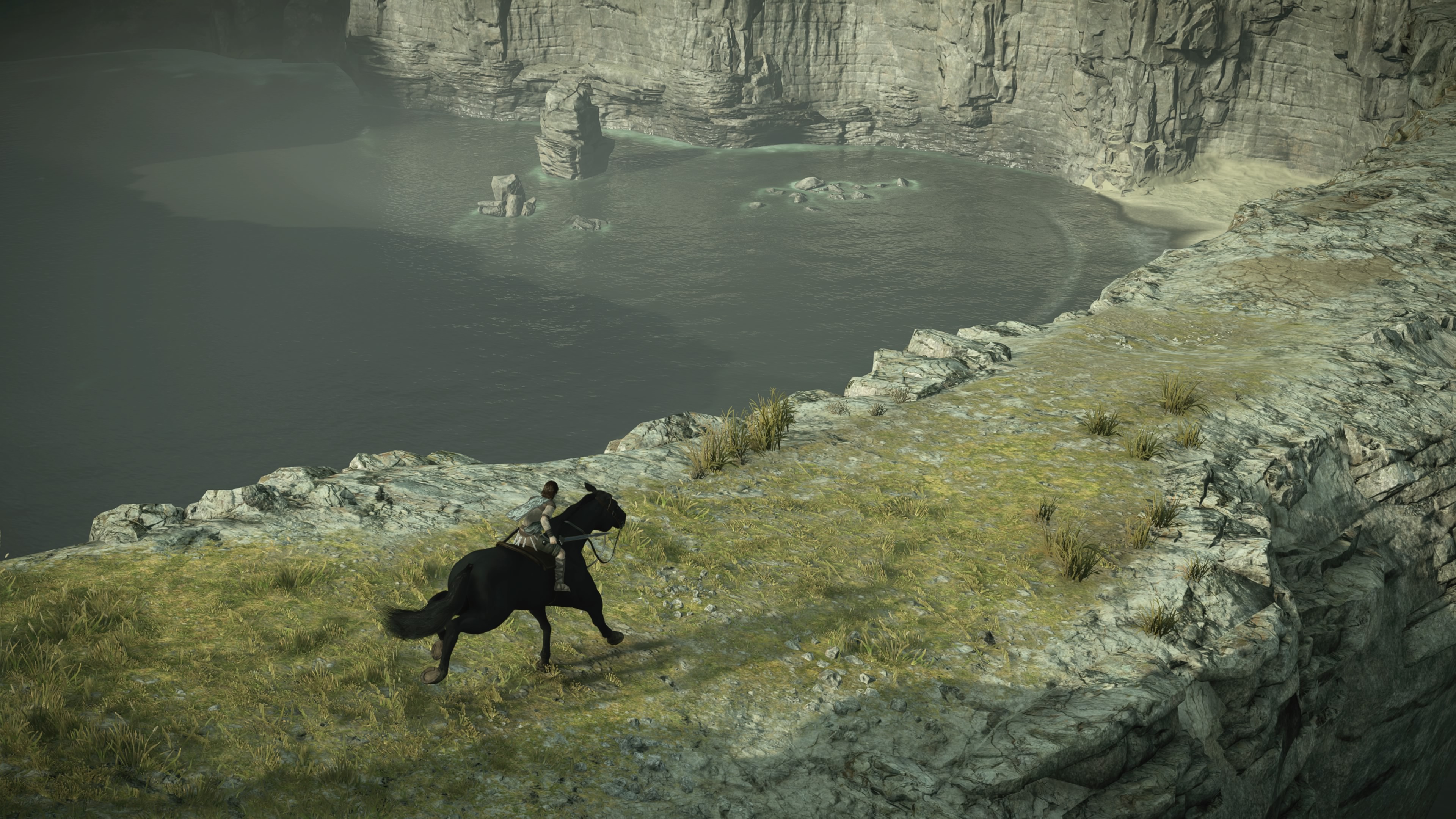 There are various other small changes and new additions present in the remake. Save stones no longer save the game, as it now employs a modern auto-save system (though the option to manually back up game data is present in the start menu as well). Upon completing the game, a mirror mode becomes available which, predictably, flips the environments completely, giving the world a surprisingly fresh feeling. These don’t amount to a completely new experience, but one that feels thoughtful and whole nevertheless.

In the end, Shadow of the Colossus is poetry. It ebbs and flows with its addictive gameplay loop of searching out and besting each Colossus. It’s a beautifully murky tale of love and sacrifice, punctuated by pangs of loss with each giant toppled. What Wander does during this journey isn’t quite good or evil — it’s a drive to conquer the obstacles set in his way. The original held these qualities, and this remake simply makes that same game even better. It genuinely stuns in its beauty, constantly impresses with its stable performance and reminds all of us why this game was so heavily praised to begin with.

When remaking a game, there are two general routes that developers can take. They can either elect to do a faithful recreation of the original game with modern technology or they can enact sweeping changes that turn the remake into an entirely new experience. Shadow of the Colossus is firmly in the former camp, but that’s not necessarily a bad thing. Bluepoint Games have made a gorgeous tribute to the original, all while ironing out many of its negative quirks in the process. The result is a gorgeous experience that shouldn’t be missed by returning fans or new players alike. It’ll be interesting to see what Bluepoint does next, seeing as they’ve almost exclusively worked on remakes and remasters for nearly a decade now; hopefully a brand-new project is on their horizon. Shadow of the Colossus has always been a stunning game, but this remake is unarguably its definitive version.