EA was firing on all of its creative cylinders in the early ’90s. The late ’80s brought them success with the debut of the Madden series, but the decade after saw them branch out and explore other genres. Isometric shooters became a bit of a thing thanks to their Desert Strike series and they tried a lot of experimental games like Haunting Starring Polterguy that defied traditional genres. Blending things together better than most was a well-regarded franchise known as Road Rash, combining racing and brawling in a way that hadn’t been done before and hasn’t been done as well in a long time. Road Rash as a series was a bit violent, but more over the top and silly, and the third entry was something I always had a soft spot for.

Some of that is simply due to the time frame I bought the game in. The summer of ’99 saw me get a Sega Nomad, and then clear out a local Blockbuster that was getting rid of Genesis and SNES games for 50 cents a piece. All of a sudden, I went from not only adding tons of games to my Genesis collection at home, but I could now play them on the go with the Nomad as well. Road Rash 3 was tailor-made for this kind of experience since you can opt to just play a single race or two or go all-out and  run through an entire circuit in a single sitting if you so desire. The core formula of starting in the back of the pack and swinging crowbars and chains to get to the front of the pack remains – but there are some new wrinkles that keep the third entry fresher than the prior ones. 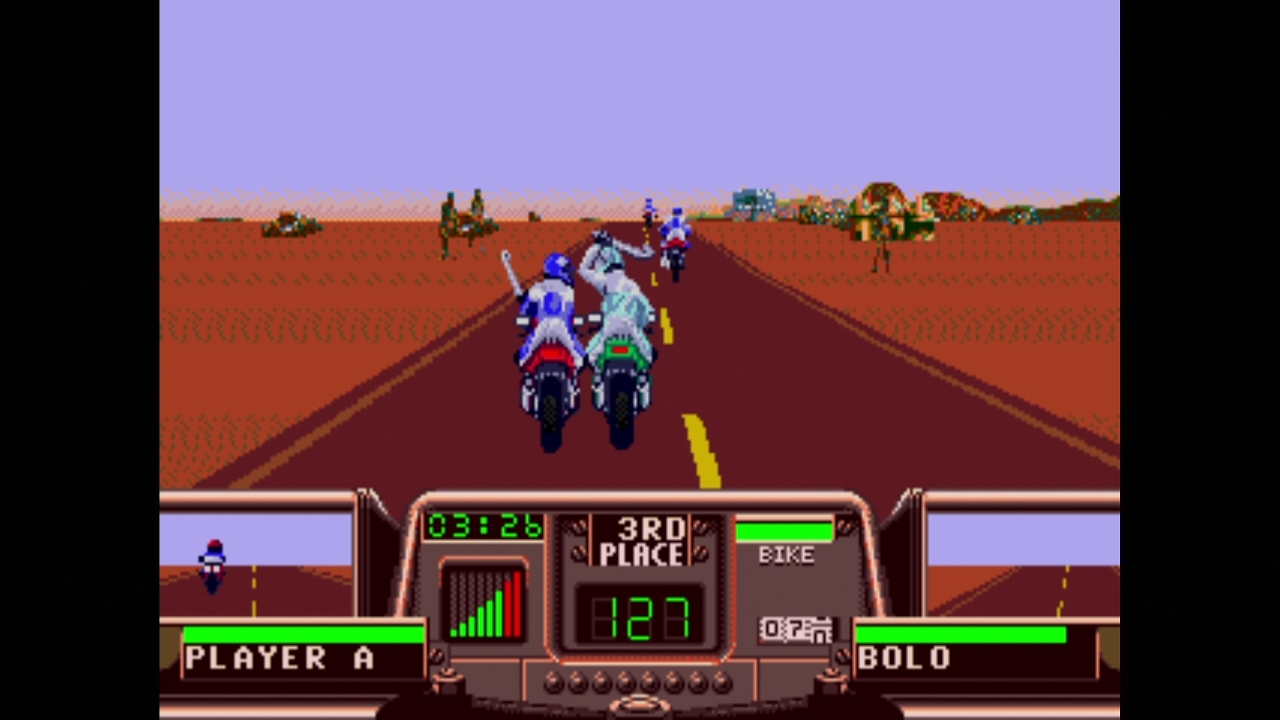 Road Rash 3 gives you a global scale to work with and features more of everything that made the series great. Tracks are larger and more diverse, with the usual mix of daytime greenery in there for familiarity alongside new areas. The international scope of RR 3 brings with it settings like a snowy German area, a bright Australian outback, or somewhat ominous purple night skies in Japan. Local flavor is mixed in with things like animals being placed on the tracks as well, giving you another obstacle to either take you out in the case of larger ones or helpful aids that can send you skyward. And then of course you have things like kangaroos that seemingly exist in the game just to get smashed into. You have to have your head on a swivel in Road Rash 3 and that means paying careful attention to your rear-view mirror.

You’ll see enemies come up from behind you and this gives you a brief window to plan out a strategy. Being able to attack with a kick at all times gives you the chance to move them away, while punches alone do decent damage. To knock someone out, however, you’ll want to have a weapon handy. Grabbing one from a rival is your only way to get one and these will allow you to physically dominate a race as long as your bike is powerful enough to keep up with the action. You may want to just beat people up, but doing that means you will likely not focus on the task at hand — winning. Failing to get in the top three means you will have to redo the courses and that is a tremendously inefficient use of time. It does, however, lead to you getting some of the most funny post-race vignettes with you being the victim of various misfortunes. Road Rash 3 does a great job of making you feel like a loser since you’ll at least be entertained by those quick cutscenes even if you suck. 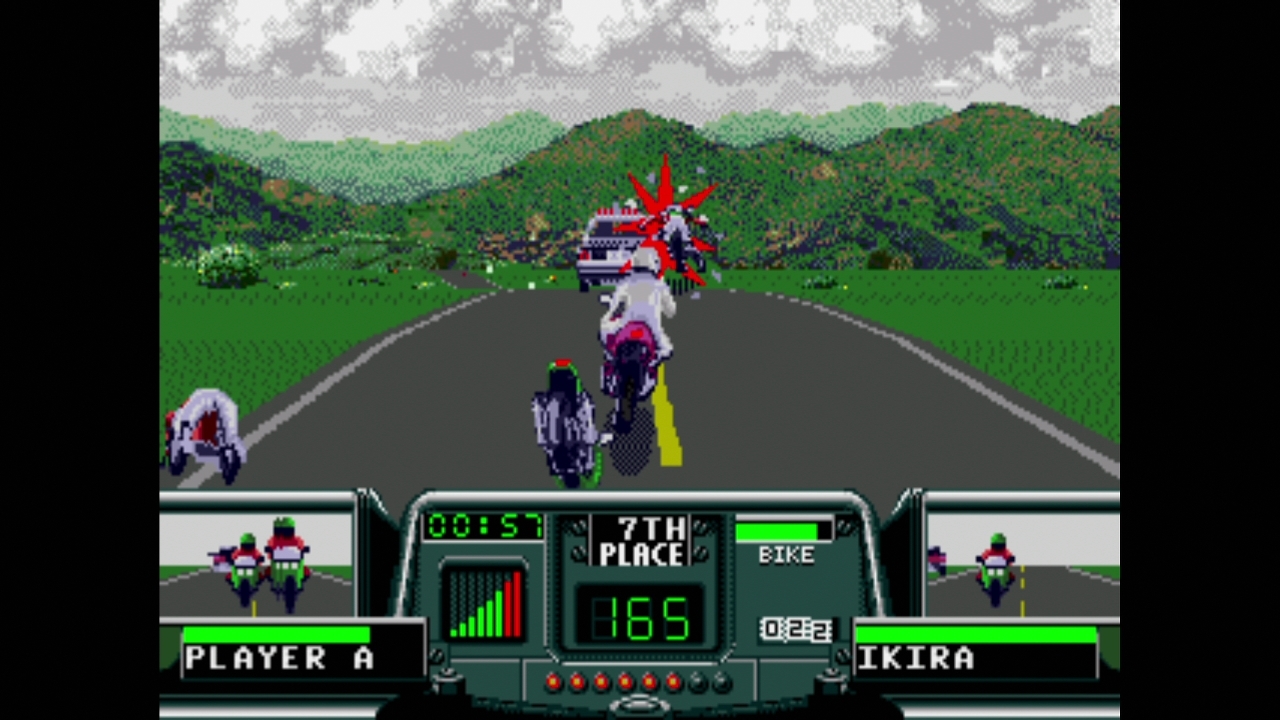 Road Rash 3 makes it easy to progress thanks to its upgrade system that enables you to grind away and improve your bike if you struggle – or if you do well, you can just outright replace your bike with one that is far better. Doing well rewards you with not only saving time, but also an increased sense of power as you hop on a bike that can trounce the competition. The key is to find a bike that is not only powerful, but also somewhat easy to maneuver. Going with just any old fast bike means that you could wind up having something that is super-twitchy and requires careful controls to properly use on the track. Fortunately, you can still win even if the bike needs a feather touch due to the sheer power you’re dealing with. The key is to just race smart and win.

Going for an all-out assault on everyone may be tempting, but won’t win you many races. Combat is something you should engage in to get a better weapon — like a taser that can do a lot of damage and gives you some range to work with. The environment itself is something you need to be aware of too. Beyond animals becoming either roadkill or roadblocks, you need to be concerned with ramps on the side of the road sending you skyward in a hurry and things like traffic. Beyond regular cars, cops love to get in your way with either motorcycle units or a barricade-style unit that blocks one half of the roadway in front of you. Careful evasion allows you to not only avoid them, but usually jump up in the rankings a little bit as it isn’t uncommon for a few riders to fall victim to their tactics and be laid out for a while. 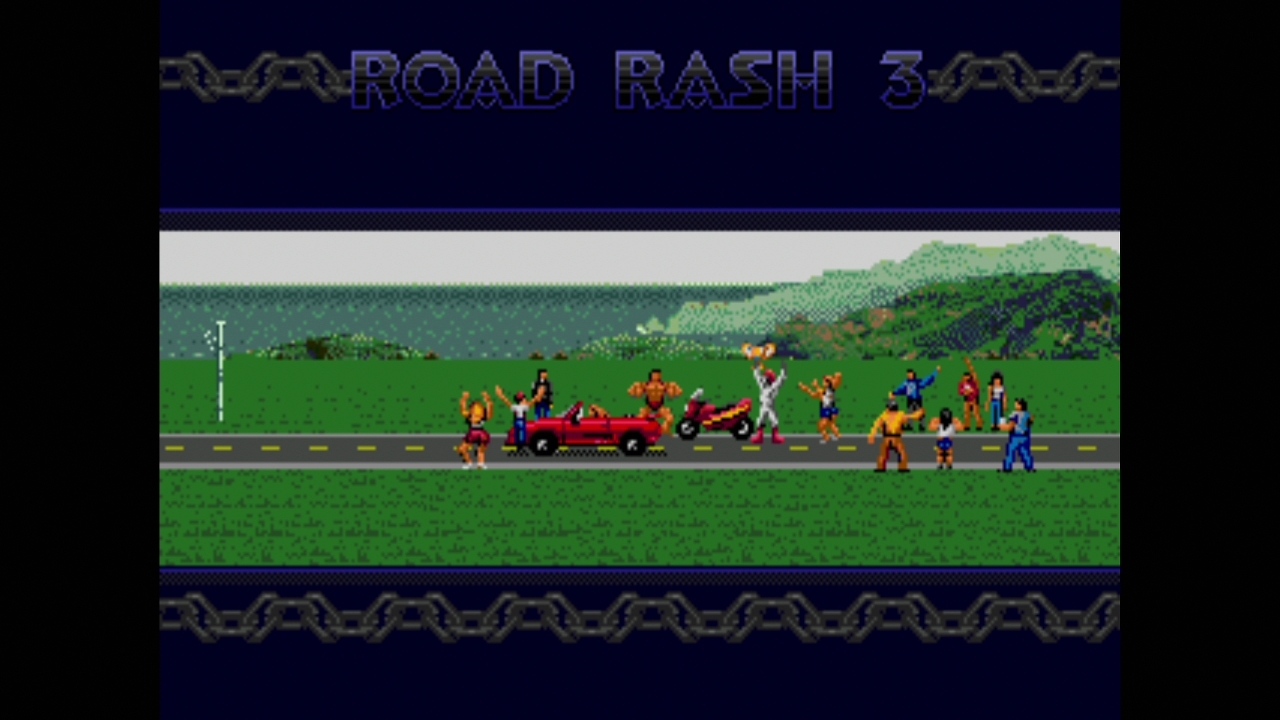 Road Rash 3 is an outstanding experience, but a mixed bag from an AV perspective. The pixel art of the first two games has been done away with in favor of a somewhat digitized look that is a mixed blessing. There is more detail on everything, leading to some incredible-looking title and bootup screens. The core game, however, feels far less smooth than it should, resulting in jerky action. It’s a testament to the strength of the core game design that it can overcome this issue. The sound is similarly annoying too. The music is high-pitched and doesn’t quite fit the fast pace of the game, even if it does usually fit the international setting you’re racing in. The sound effect work varies from fantastic for weapon sound effects to muffled, with things like bike collision sounding a bit like two pieces of sand paper slapping together.

Road Rash 3 remains fun despite its imperfections, but hasn’t seen any re-releases since the Genesis original. Given how many compilations have come out since 1995, it’s a bit surprising. EA, however, hasn’t done much to monetize the franchise beyond put a poorly-emulated version of the original game on a PSP EA Replay collection. Fortunately, you can get the game for around $20 now – or $40 complete. Anyone buying one of the AtGames Sega Genesis Flashback consoles should think about checking this out if you’ve ever wanted to enjoy the series and haven’t had a chance to yet. If you want a more modern-day take on it, try Road Redemption on PC — it offers up the same kind of gameplay, but with more violence and a more modern control setup.