It’s in no way surprising that the mantra of “…but what do I do?” or variations thereupon, has lingered over Sea of Thieves like a pungent-but-irremovable odor. While there was always a strong case that there’d already been a fair amount of intrigue built up for what Rare — proper Rare that is, not Kinect Sports-shackled “Rare” — was cooking-up, prior to and since its reveal back at E3 2015 (which admittedly garnered somewhat of a deflated “eeeeeehhhhhh” reaction from yours truly), details pertaining to its content, its progression, its finer details outside of an odd sample of footage and some rather unfunny plodding through voluntary player commentary, have been somewhat conserved. For what purpose though; after all, you and I both know Microsoft need all the good marketing they can get their hands on if they’re to give Xbox a reasonable chance in 2018.

For someone who was initially miffed about Rare going the way of a massively-multiplayer, online experience — and admittedly heralding a much lower level of excitement as a result — the outcome, after a fair number of days at [virtual] sea in the closed beta, are more upbeat. Albeit, still mixed in a number of ways. Let’s start with the positives and work our way down: Sea of Thieves has a peculiar degree of charm to it. Perhaps not to the same degree of colorful personality of previous titles, but subtly present nonetheless. Anyone who’s followed Rare for a long time will instantly recognize the degree of care and consideration for the details, both grand and minuscule in equal measure. The glare of the sun as you swim your way back to your ship, the ruffle of paper as you scour your chartered map for the desired island to reach; even the way your on-board lanterns flicker and crackle as the waves collide and risk snuffing out the flames. 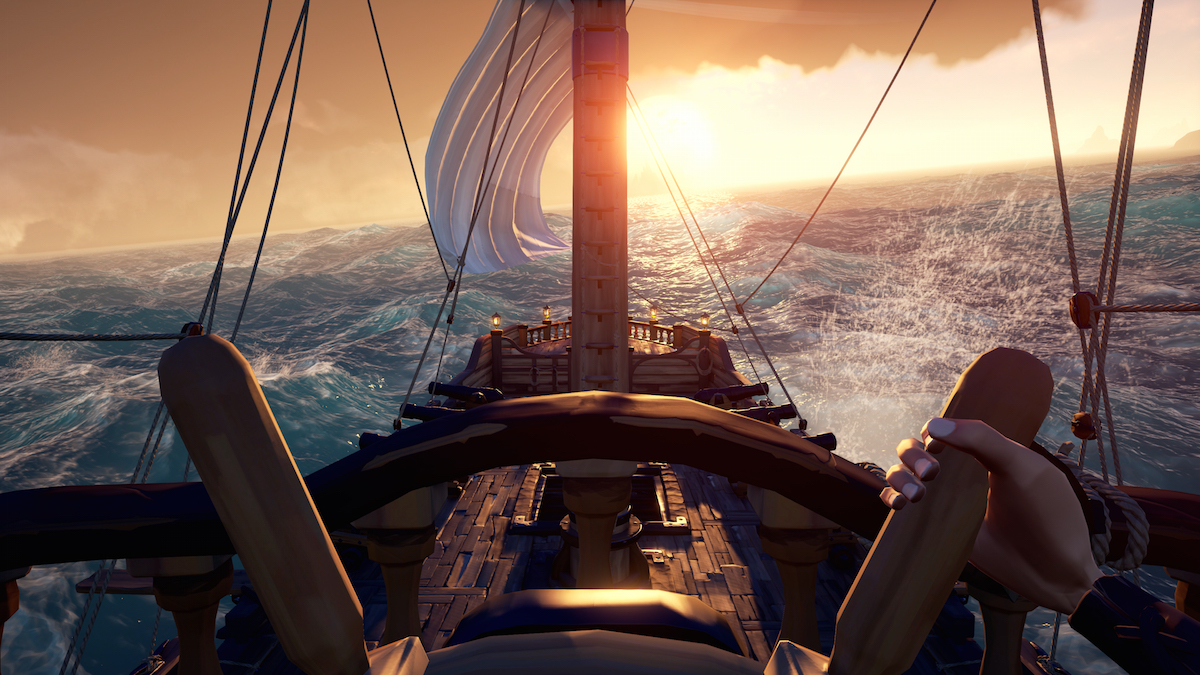 Then there’s the workings and actual programming side of the ocean itself, particularly the many ways in which the waves crash and tumble against your ship. The textures and dynamics, the way they sway to and fro, sending a once calm voyage into potentially risky affairs; I’ve plenty to say on this feature alone, so I’ll leave it at that for the time being. In terms of gameplay, wherein (least in the beta build) you can decide to go it alone, team up with another or join a party of four, Sea of Thieves is a hands-on, labor-focused experience, stripping away all hereditary comforts with the interface such as a mini-map or objective indicators alike in favor of more communicative and team-based, working together.

Perhaps a tutorial or two beforehand, randomly placed as you are amid one of the trading outposts upon booting up a new session. “SEAOFTHIEVESANDHERE’SANISLAND, GO!!” Ummmm…errrr, wait-what? Yes, it’s that sudden and without a map or instructor or any sort of indicator beforehand, the perplexing nature and seemingly deserted simplicity of your surroundings can feel as much like miscommunication as it can misunderstanding. There could very well be some manner of narrative or cinematic oversight with which the beta hasn’t provided, but it goes without saying that Sea of Thieves almost expects too much for its starting players to simply just accept and tolerate. 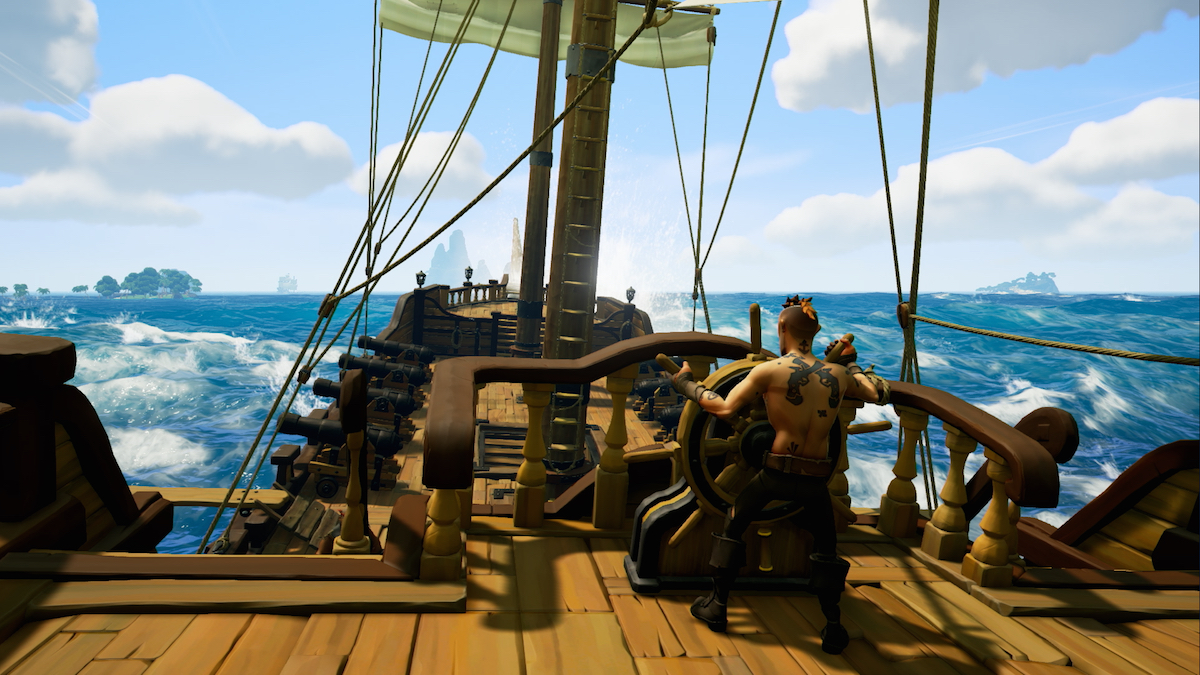 But perhaps it’s this deliberate restriction that lends itself to some interesting interactions between players and novel use of player skills as a means at working better together. While the skill at merely turning a map around to show others sounds ridiculously basic, it’s a clever move in context. A means to build bridges between similarly-plucked team-mates and better incentivises Sea of Thieves’ core, principle lesson in working together. Granted the perk is proven moot when, upon agreeing on a particular voyage, you simply get handed the same maps in your inventory, but the physicality of such interactivity in-game is welcome regardless. When it comes to your ship, though, all hands are most certainly on deck. There are sails to align and angle; potential hazards to flag and shout out to the player steering the ship (whom, if the sails are set at full length can’t see where they’re steering, again a nice nudging toward better relationships)…and if worse comes to worse, leaks to repair should you collide. Or even worse, cries of “FRAME-RATE!” — as I had to do when a teammate is barking compass directions but I have no means to control the stuttering performance — when the game (on PC) decides to nose-dive from relatively stable 60FPS to, at its worst, the high-teens — the most notable drops occurring mostly at sea, relatively afar from shore.

Of course, the abundance of open water does inevitably lend itself to islands to stop by and pillage — hearkening, of course, to the more casual affairs of Wind Waker and the game does indeed share many similarities — obvious or otherwise, good and bad. But if anything, Sea of Thieves reminds me more so of Jalopy — a rather unexciting-yet-ironically-stimulating simulation of driving one’s car down a highway. And just like that game, there’s an uncanny loft of satisfaction to be had in the mundane and the repetitive. Particularly when you’re lucky enough to land yourself with a crew equally as focused as yourself…and not just there to troll or ruin the fun for everyone’s sake, which sadly me and a friend got paired up with on our venturing for treasure. Disappointing as it is for some to play mutiny (albeit unintentionally) and ride your ship away from the island you’re stuck on, perhaps that’s just part of the general risk. After all, this is a game about pirates; just like the Souls games, the anarchy and unruliness of the real world bleed fittingly into the context of the premise. 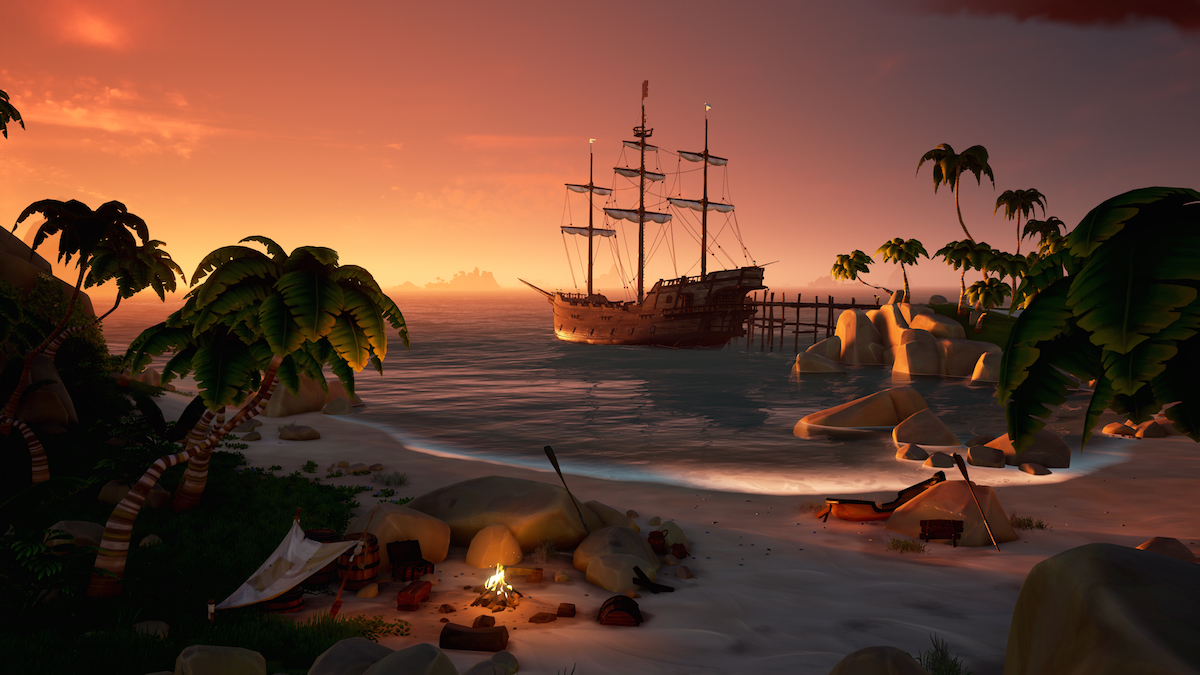 And yet…as pleasing as it was to eventually get to grips with the ship’s functions — jostling between control of the wheel and micro-managing of the sails, during solo sessions — or as enticing the next island on the horizon was to make landfall over, it’s hard not to come away from Sea of Thieves and think: “OK…but what else is there?” Admittedly while the beta did restrict activities to purely hunting down treasure, to say the more “in-between” segments — the mundane segments if you will — proved to be the more entertaining and/or insightful segments brings up a worrying and (potentially) lacking hook that Sea of Thieves’ gameplay sorely needs.

I’m not suggesting there be some kind of grind or loot-based collectathon (Rare certainly know how to do collectathons, but perhaps they best steer away from that concept for the time being) that hooks players into getting better/faster/stronger/more resilient, but more importantly, coming back for more. Whether it’s the bare simplicity of island design, the lack of any real management structure aboard your ship or just the general transparency of its world’s engagement, Sea of Thieves feels just like one of those temporary respites prior to some grander investment in another game. Something you muck about with for an hour and nothing more. And for something as crucial as it’s been for someone like myself who seldom indulges in online multiplayer, while Sea of Thieves gets the teamwork principle down…then what? 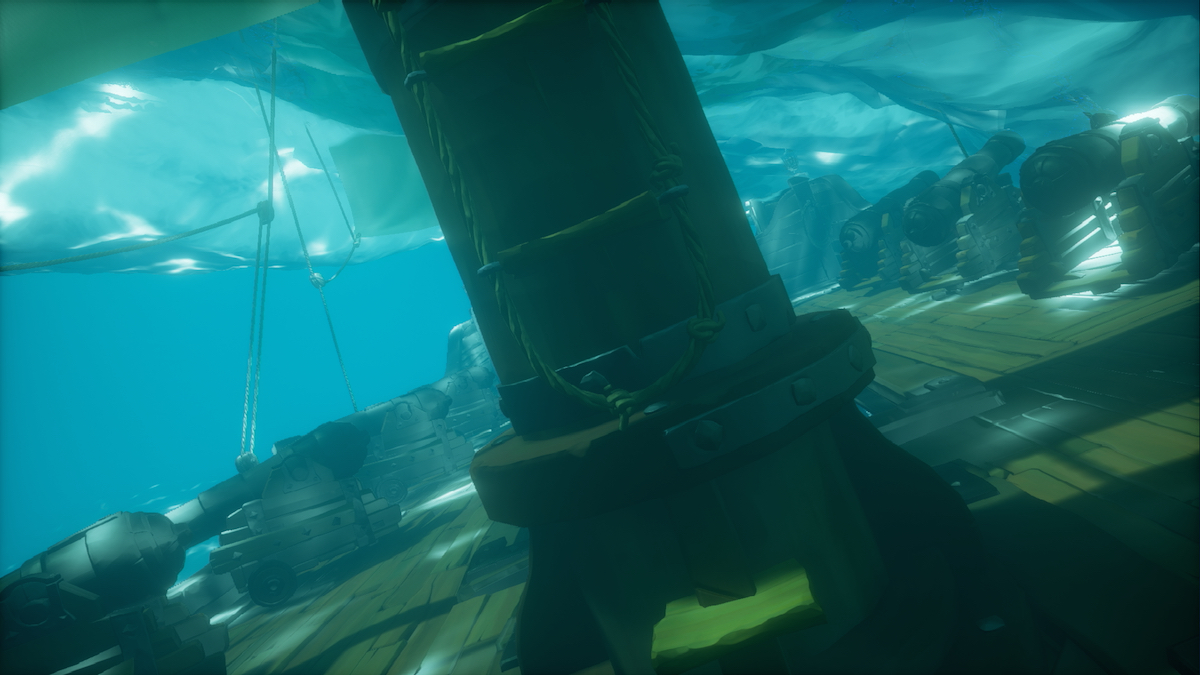 Is this a game of substance or a game of potential — clambering to the hope that players will “just make their own fun?” Yes, there’s a little silliness and due reactionary disbelief as you watch your ship sink beneath the ocean as a swell of string arrangement signal open water once more being the most terrifying concept in existence (especially at night), but these are unintended accidents outside the supposed “bulk” of the game’s content. When you seemingly have more engagement in the surprisingly-detailed ocean physics — rather than the focal content on show — well then that’s a problem. And in Microsoft’s/Xbox’s case, a big problem.

How far will the trading concept go, will the cosmetic and customization sides be pushed, will the jolly and co-operative nature of fulfilling objectives flourish when it comes to buddying up with fellow players? That is, when the match-making is (and hopefully will be) better fortified. Without question, there’s a pull in Sea of Thieves that will win even the most jaded of lone wolves over, but is life at sea (and just the sea) enough of a justification? I commend Sea of Thieves for its attractive proposal, but with such a lacking world and over-reliance on random encounters, let’s just say Rare haven’t quite convinced me wholeheartedly on this concept just yet.