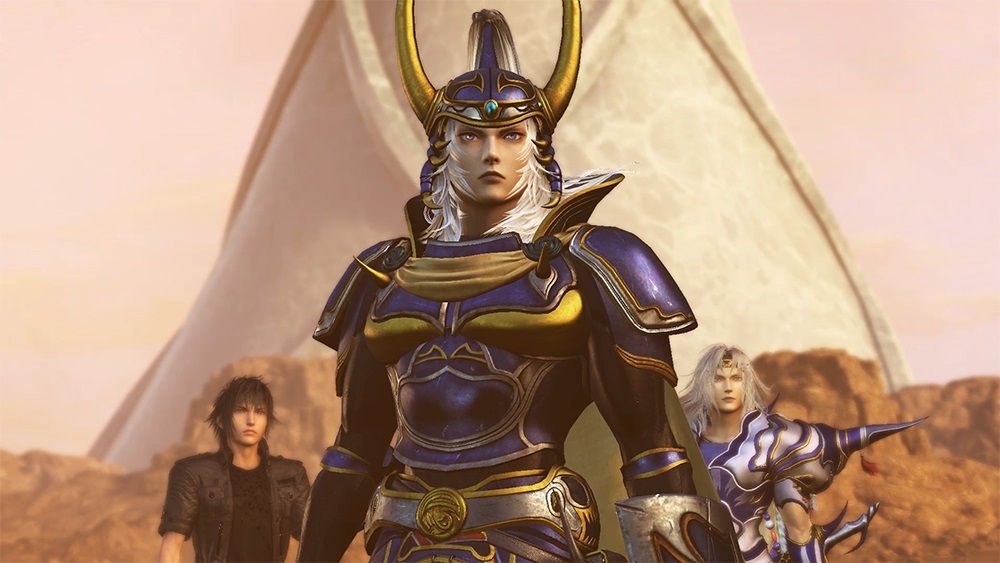 All three Dissidia games feature a story mode and tell a complete story. Dissidia 012 is the first game in the story, detailing the twelfth cycle of conflict between Cosmos and Chaos. Dissidia Final Fantasy picks up in the thirteenth cycle and sees the fall of Cosmos and Chaos. Dissidia Final Fantasy NT is the third part of the story, and deals with a new conflict between new gods. While all Dissidia games tie together, each game has a different method of telling its story.

Dissidia Final Fantasy features ten campaigns, one for each character. Most of the action takes place on a tiled board where players move their character about. On the board, players can participate in battles, open chests and engage in boss fights. Dissidia 012 continued to use this system, but also included an open world map that players could explore. The tiled board would only appear when entering a dungeon.

Dissidia Final Fantasy NT ditches the open world map and tiled board system. Instead, a chart system with nodes is employed. Players spend an in-game currency, Memoria, to unlock these nodes, which consist mainly of cutscenes. A few clusters of nodes contain battles and boss battles against the game’s summons, but for the most part it’s just cutscenes. 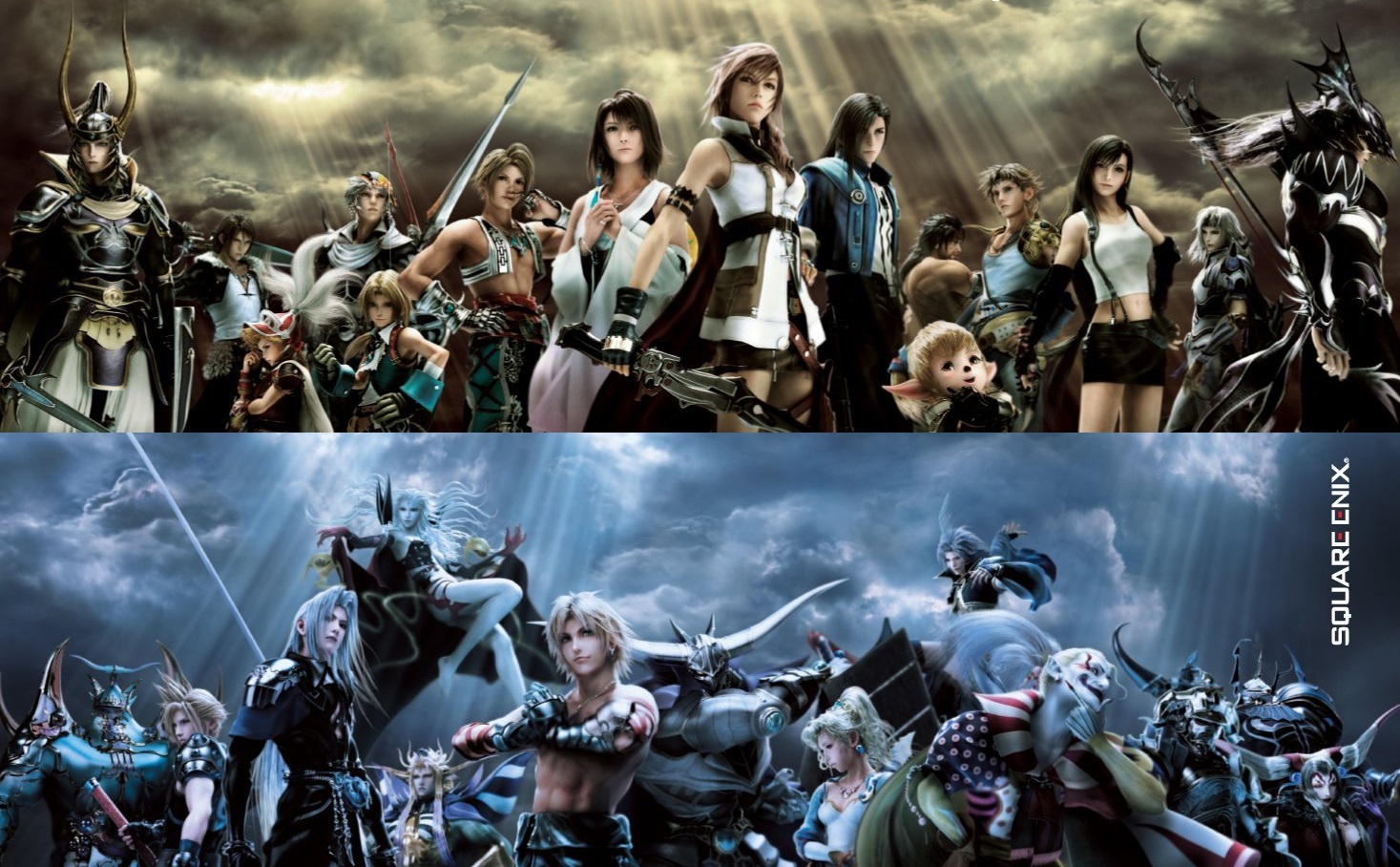 All three Dissidia games have similar rosters starting with the base twenty characters first introduced in Dissidia Final Fantasy. These characters include the main protagonist and antagonist from I-X with the exception of Jecht who was chosen over Seymour due to the latter lacking a personal connection with Tidus. In addition, once all campaigns were beaten, players had the opportunity to unlock Shantatto (XI) and Gabranth (XII). In total, Dissidia Final Fantasy had 22 playable characters.

Dissidia Final Fantasy NT has 21 of the original’s characters plus three for from 012: Lightning, Kain and Vaan. Noctis (XV), Y’shtola (XIV), Ramza (Tactics) and Ace (Type-0) joined the roster for the first time. Unfortunately, Tifa, Yuna, Laguna, Prishe, Gilgamesh, Feral Chaos and Gabranth did not make the cut. Six characters are planned as DLC, including a returning female character from a recent Final Fantasy game (likely Yuna based on the provided description). 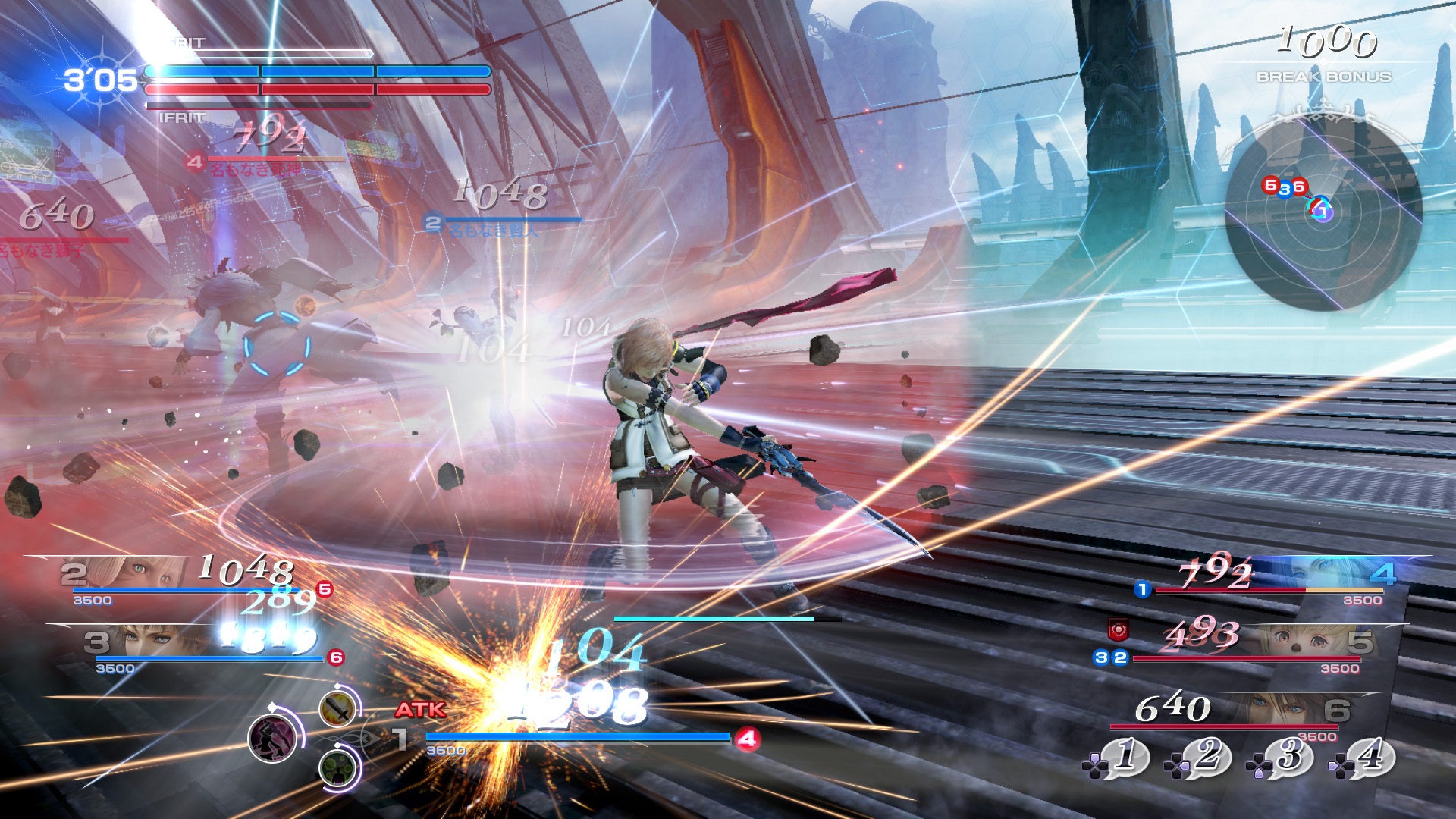 The maps players do battle in have changed greatly between the PSP games and the recent PS4 game. Dissidia Final Fantasy shipped with 12 maps with Dissidia 012 adding an addition 7. Due to the gameplay’s focus, the majority of the maps featured tons of verticality with walls to run up, rails to grind, and platforms to jump on.

Dissidia Final Fantasy NT’s arenas are very different. A total of 14 maps ship with game with Final Fantasies I-XIV receiving representation. Due to the way the gameplay is designed for this entry, arenas no longer feature much verticality. Instead, to best accommodate the 3v3 gameplay, NT’s arenas are wider with more terrain to cover. A few maps are still tall enough to allow for wall running, but the grinding rails and platforms are gone. More arenas are coming as DLC, though it is unknown if they’ll be released as free or paid content. 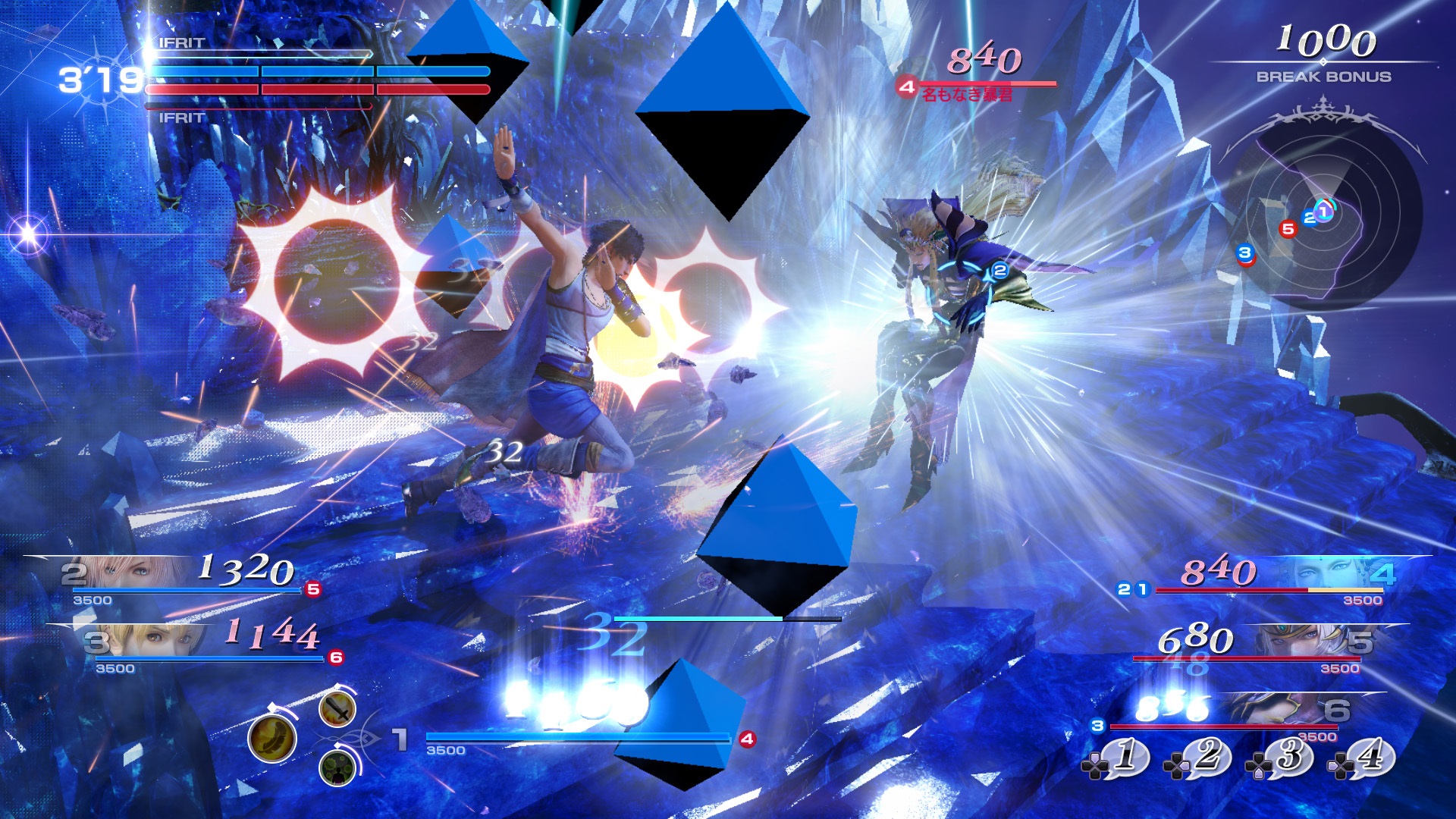 All three Dissidia games use the Combat Bravery system. The goal of the system is to raise your bravery, chip away your opponent’s bravery and then drain their health bar with an HP attack. Each character comes with their own distinct fighting style and various HP moves that can be equipped. Asides from that, the games diverge greatly.

Both Dissidia and 012 focused heavily on integrating RPG elements into the fighting system. Weapons, armor, items and bonuses were earned by playing the game or through purchase at a Moogle store. Each character was customizable and leveled up with use.

Fighting was also different with both PSP games focusing on 1v1 battles. Two characters would square off in heavily vertical arenas for a quick deathmatch. Dissidia 012 did expand on this with Assists, whom could be called in to deliver a bravery or HP attack, but there was never any team cooperation with other players.

Dissidia Final Fantasy NT sheds the RPG elements of its predecessors in favor of pure fighting. Players can still customize a few elements, such as their HP attack and EX Skills, and level up, but NT is mostly a pure fighting game. The game has shifted away from a deathmatch focus to a team deathmatch focus. All fights are now 3v3 affairs with no options to switch the player count. In battle, each team has three bars with a bar disappearing each time a character loses their HP. The objective is to deplete each bar until one team is left standing. A variant on this mode involving destroying the opposing team’s crystal is also included. 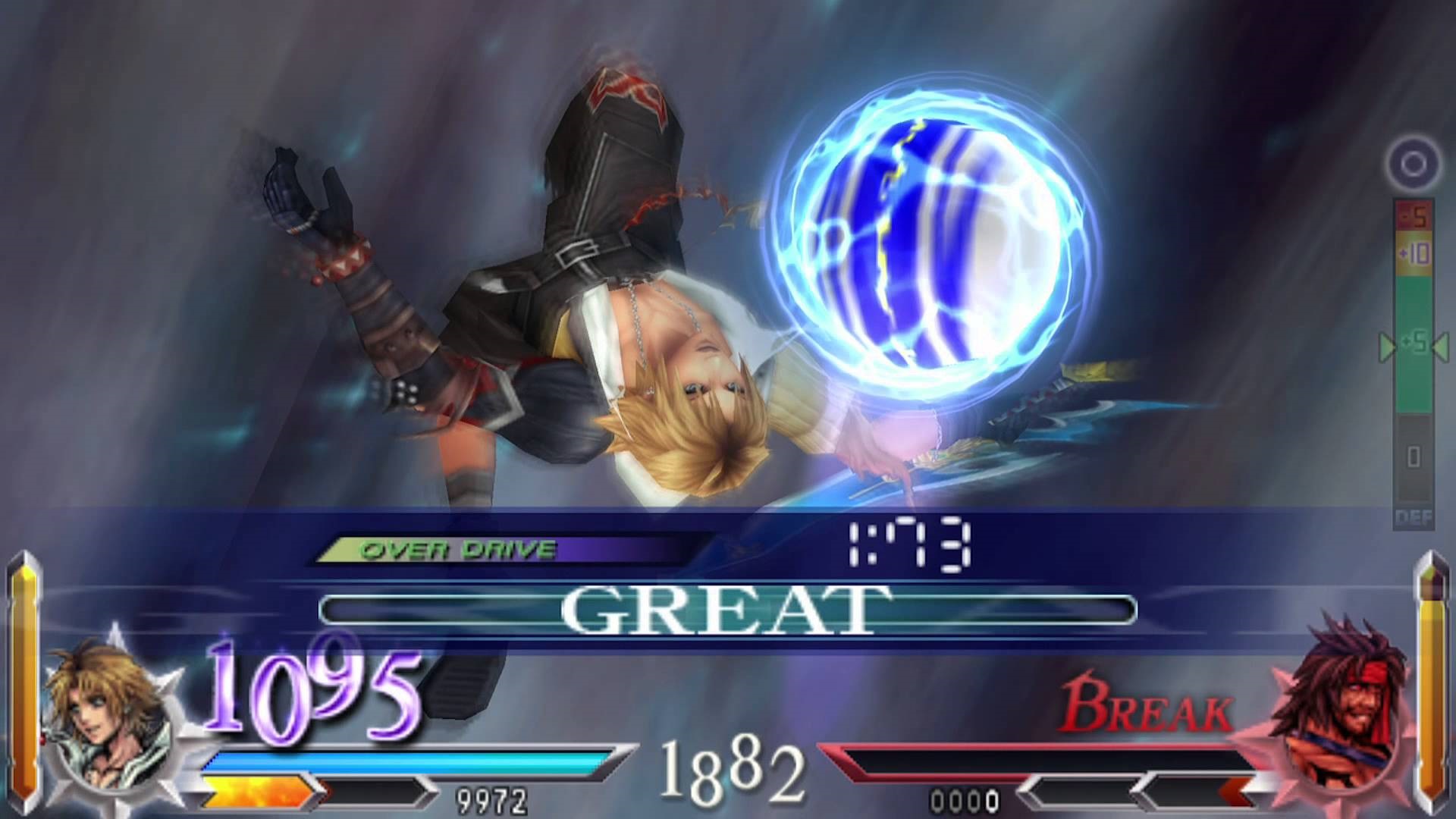 In Dissidia Final Fantasy and 012, players could enter EX Mode by collecting EX Force littered throughout the map. While in EX Mode, characters gain unique bonuses, such as special attacks, increased damage and other enhancements. Some characters, like Warrior of Light and Jecht, would take on an entirely new appearances, while others, like Squall and Tidus, would get advanced weapons.

Most importantly, however, EX Mode would allow characters to unleash their EX Burst. After landing an HP attack in EX Mode, players are given the opportunity unleash a Burst, Dissidia’s take on Limit Breaks. Flashy events, EX Bursts delivered several bravery attacks before culminating in a massive HP attack.

Dissidia Final Fantasy NT replaces EX Mode with EX Skills. These are moves that have to be charged before being unleashed. Each character gets their own unique EX Skill, which can be a bravery dealing attack or a passive ability. Each character can also equip two common EX Skills, such as poison or blindga. 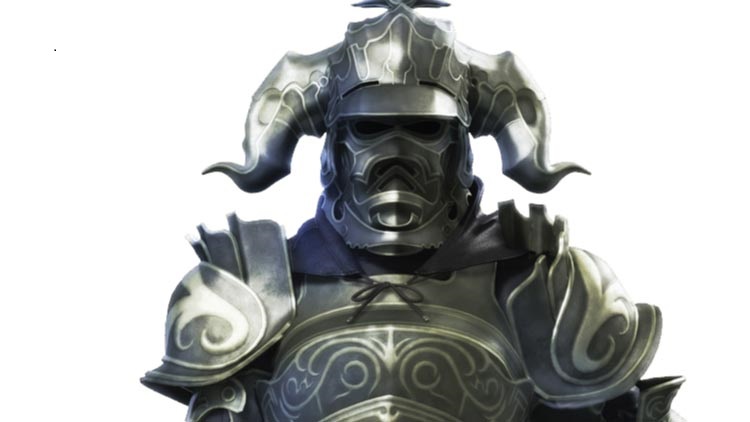 One of the oddest omissions in Dissidia Final Fantasy NT is Gabranth, the villain representing Final Fantasy XII in Dissidia and 012. As mentioned above, Gabranth was one of seven characters not brought back for the game. Considering the lopsided nature of the roster (only ten characters are villains), Gabranth’s absence is even more noticeable.

Well, as explained above, Dissidia Final Fantasy NT does not feature the EX Mode, which is extremely important to Gabranth’s gameplay. In Dissidia and 012, Gabranth is a slow character with no HP attack. While holding down Square, Gabranth quickly charges his EX Gauge. In EX Mode, Gabranth’s speed vastly increases and is able to pummel enemies with powerful bravery combos and deliver HP attacks.

Since there is no EX Mode in Dissidia Final Fantasy NT, Gabranth would have needed to be rebuilt to work with the game. Unfortunately, Team Ninja opted not to do this, and, due to the descriptions of the DLC characters, we know he will not be returning in the near future. 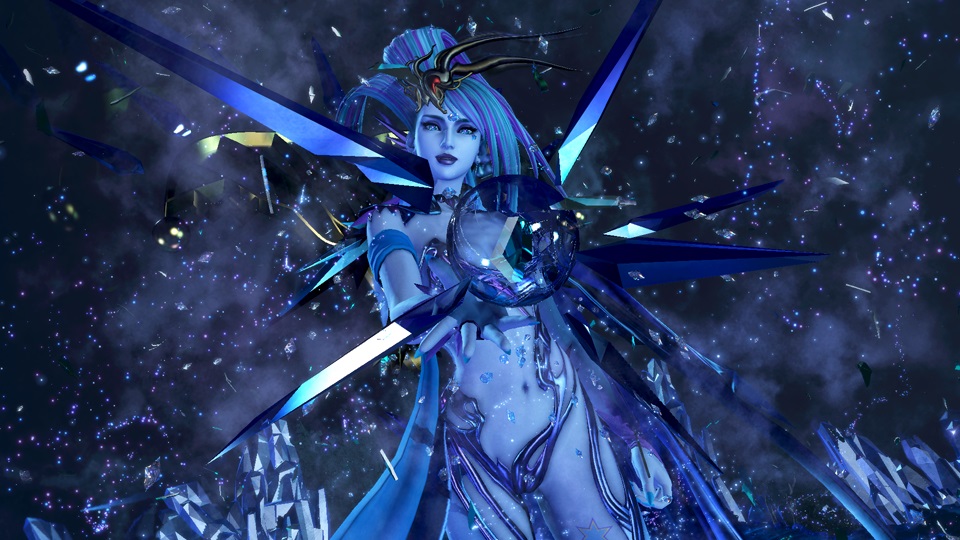 Summons are featured across all three Dissidia games, but function differently across them. In Dissidia Final Fantasy and 012, summons come in two variants: auto and normal. Auto versions activate when certain conditions are met, while normal versions need to be triggered via input. Normal versions are typically more powerful, but their effects don’t last as long.

In the PSP games, summons provide only passive effects to the player and against the enemy. Some may sharply increase a character’s bravery, freeze the current bravery for a few seconds or instantly Break an opponent. They do not, however, join the battle.

In Dissidia Final Fantasy NT, summons are earned by destroying summoning cores to build the summon meter. When summoned, these powerful creatures not only provide valuable buffs, but will also join the battle and attack all opponents. Great at draining enemy bravery bars, summons can swiftly change the course of a battle. Each team’s summon can only be used once per match, though.

Dissidia Final Fantasy NT is available now on PS4. Be sure to check out our review of the game.