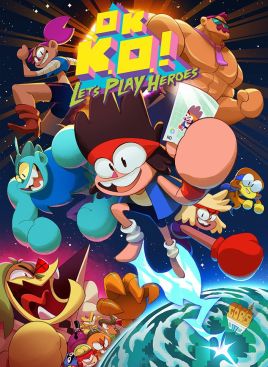 There’s something a bit ironic about the fact that despite a majority of this decade’s most popular cartoons drawing heavy inspiration from old-school video games and paying homage to them in several ways (see Adventure Time, Regular Show, The Amazing World of Gumball and many more), none of them have been able to spawn any truly excellent video game tie-ins of their own (well, with the exception of the mobile RPG Steven Universe: Attack the Light). But now we’re here with possibly the most ambitious cartoon-to-game translation in recent years, OK K.O.! Let’s Play Heroes. Aside from the animated series OK K.O.! Let’s Be Heroes using heavy amounts of video game tropes and shout outs to several titles, the game was developed by the acclaimed indie studio Capybara Games, who were actually working with the show’s creators on the project even before the show first aired, making sure everything tied in perfectly. Clearly, this was the recipe for success, right?

For those of you who haven’t seen the show yet but are puzzlingly reading a review about a game based on it, the focus is on the titular K.O., a young kid who works part-time at Gar’s Bodega in Lakewood Plaza Turbo, a shopping center for various heroes straight out of video games, manga, and the like. Working alongside teenage co-workers Enid and Rad, as well as his mom Carol and manager Mr. Gar, K.O. has to attend to various odd chores in this world while thwarting attempts by the villainous Lord Boxmore and his similarly-titled store to destroy the plaza (typically involving his robot “children”).

For OK K.O.! Let’s Play Heroes, we see K.O. and company hyped over the debut of holofoil Pow Cards, a new version of the trading cards that track the levels of all heroes, RPG-style. However, Boxmore buys his way into the company behind the cards, and resets everyone’s Pow level to zero, in an attempt to demoralize them and make for an easier conquest. Thanks to a hack by his friend Dendy, however, K.O. gains the ability to gradually build up everyone’s levels again by helping them out in various ways. And so begins K.O.’s quest to assist as many people in the plaza as possible, hopefully building himself up to his first Level 1 Pow Card in the process. Simple stuff that leads to a host of other small plots, but it works for a while. 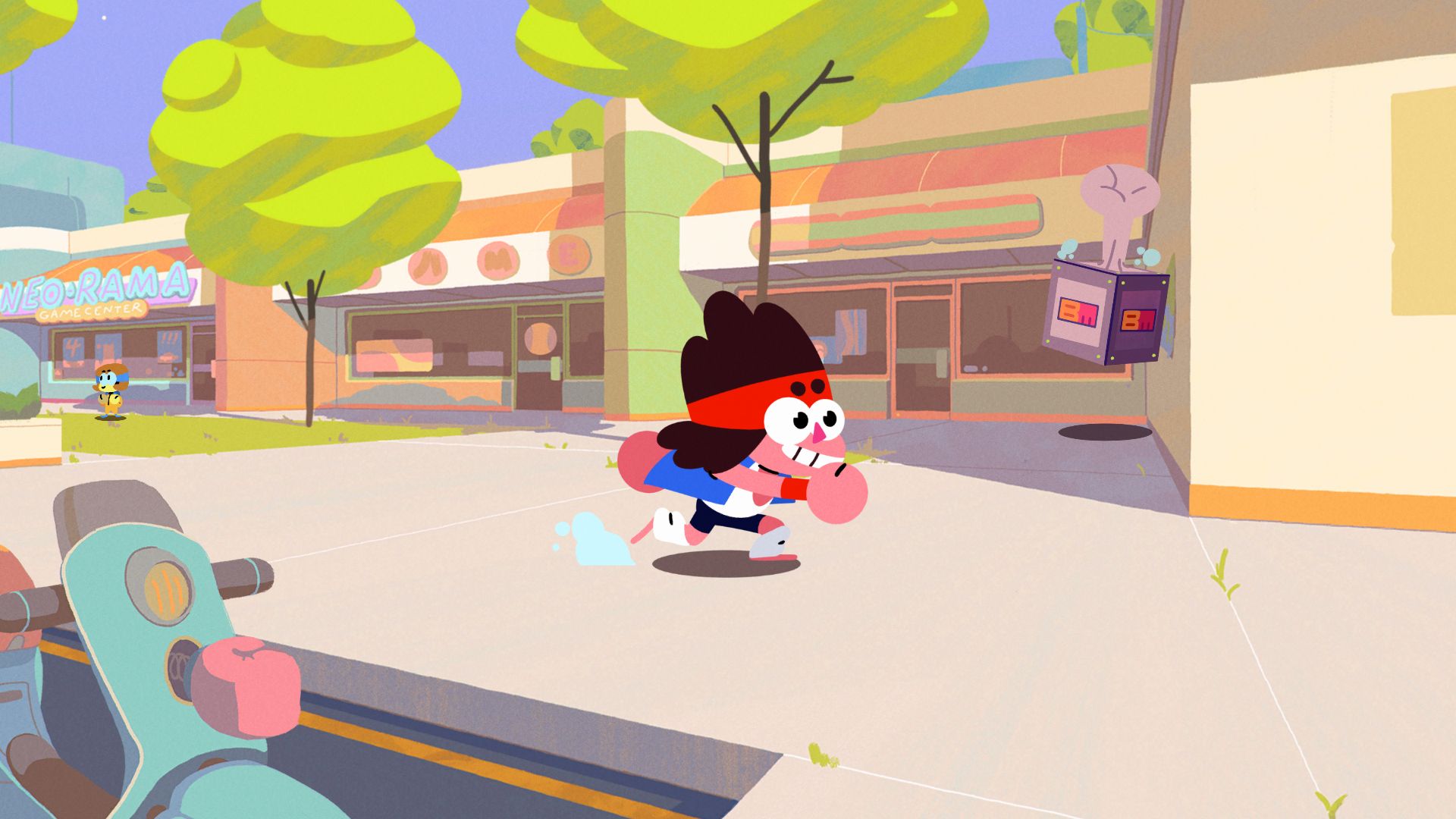 The meat of the gameplay in OK K.O.! Let’s Play Heroes is located in the 2D beat-‘up combat, where K.O. has to dispose of the various robots that Boxmore sends to attack, and where the game gets into some slightly Vanillaware-style combat (one 2D plane as opposed to traditional arcade beat-’em-ups). And while the combat isn’t anything particularly deep, with your standard set of punches, low kicks, dodge rolls, double jumps, charge attacks, et cetera, it is still incredibly fluid and fun, tackling up to three of the show’s memorable villains at a time. Said foes develop a decent variety of attacks, and the challenge level always remains tricky but fair, in the good way.

The only flaw in the combat is the mechanic that allows you to collect microchips. How it works is that whenever an enemy taunts you, you can hit them and wind up stunning them for a few seconds, allowing you to wail on them for microchips that you can sell to Dendy for cash that can be used in purchasing more packs of Pow Cards or various items such as one-time buffs. It sounds simple, but the problem here is that enemies only taunt once they’ve hit you in a specific manner, so collecting them means having to take damage, in a rather counter-intuitive way. Most times, this also means having to recover from the attack during their brief taunts, and also having to deal with multiple enemies at times to even get back to them and land a hit in time. Definitely some frustrating stuff.

The notable addition here in OK K.O.! Let’s Play Heroes, though, is the “Powie Zowie” that the holofoil Pow Cards K.O. can collect have. Once a card’s level is fully restored, the Powie Zowie is unlocked, allowing you to equip the cards for use in battle in order to summon various characters to deliver attacks, similar to strikers in the likes of the Marvel vs. Capcom games. Once you land enough hits or spend enough time, all it takes is one button push to send the likes of exploding skeleton bits or rampaging burrito trucks into battle, providing a good spread of cute and funny attacks that nicely capture each character’s personality. 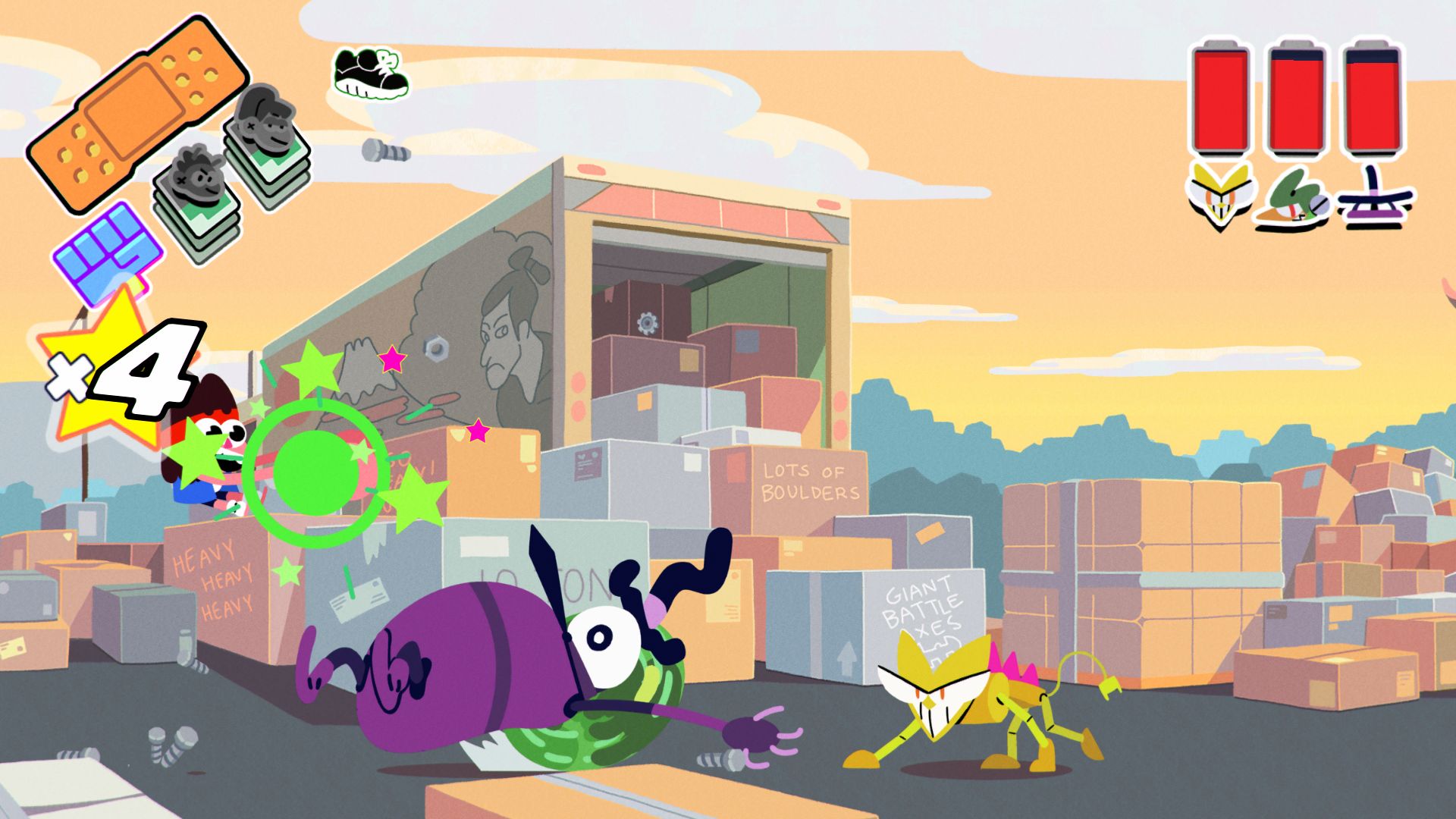 Indeed, as a fan of the show, I can confirm that capturing the essence of the cartoon is one of OK K.O.! Let’s Play Heroes‘ greatest strengths. All possible voice actors return to reprise their roles and do a damn good job keeping the characters enjoyable, and for the most part, the humor tends to be on point. And all of this is while Capybara utilizes a unique, lineless art style that shakes things up a bit and makes for some amazing visuals, but that still leaves everything nice and recognizable. The music also matches the show’s tone perfectly, typically bring bright and peppy, and there are more than a few cute details in the game, especially with K.O.’s binder that acts as the game’s menu.

So, with great aesthetics that capture the show’s flavor and terrific combat that’s nice and smooth, this should have made for beat-’em-up game that was a slam dunk. But unfortunately, someone wanted this to be a bit of a beat-’em-up/RPG hybrid of sorts, and that is sadly where OK K.O.! Let’s Play Heroes ends up stumbling.

Yes, the RPG elements really tend to feel unnecessary and even crowbarred in, bringing things down a bit. For starters, you can gain experience points after each match in three different areas (strength, agility, and coolness), but all it ends up doing is boosting one of K.O.’s special attacks slightly with each level. You can use the previously mentioned buffs that you purchase to gain more experience after a match, but honestly, it never feels like the damage increases by any notable amount with each level, and K.O.’s standard set of moves tends to work fine as is. And while I applaud the use of Lakewood Plaza Turbo as an overworld/hub world, it turns out all you can mostly do in it is perform fetch quests, which is what the errands K.O. performs for everyone quickly turn into. The main plot at least has battles, but with a few exceptions, the side quests tend to consist of little more than finding an object in the game’s world, or just flat-out purchasing something from a store. 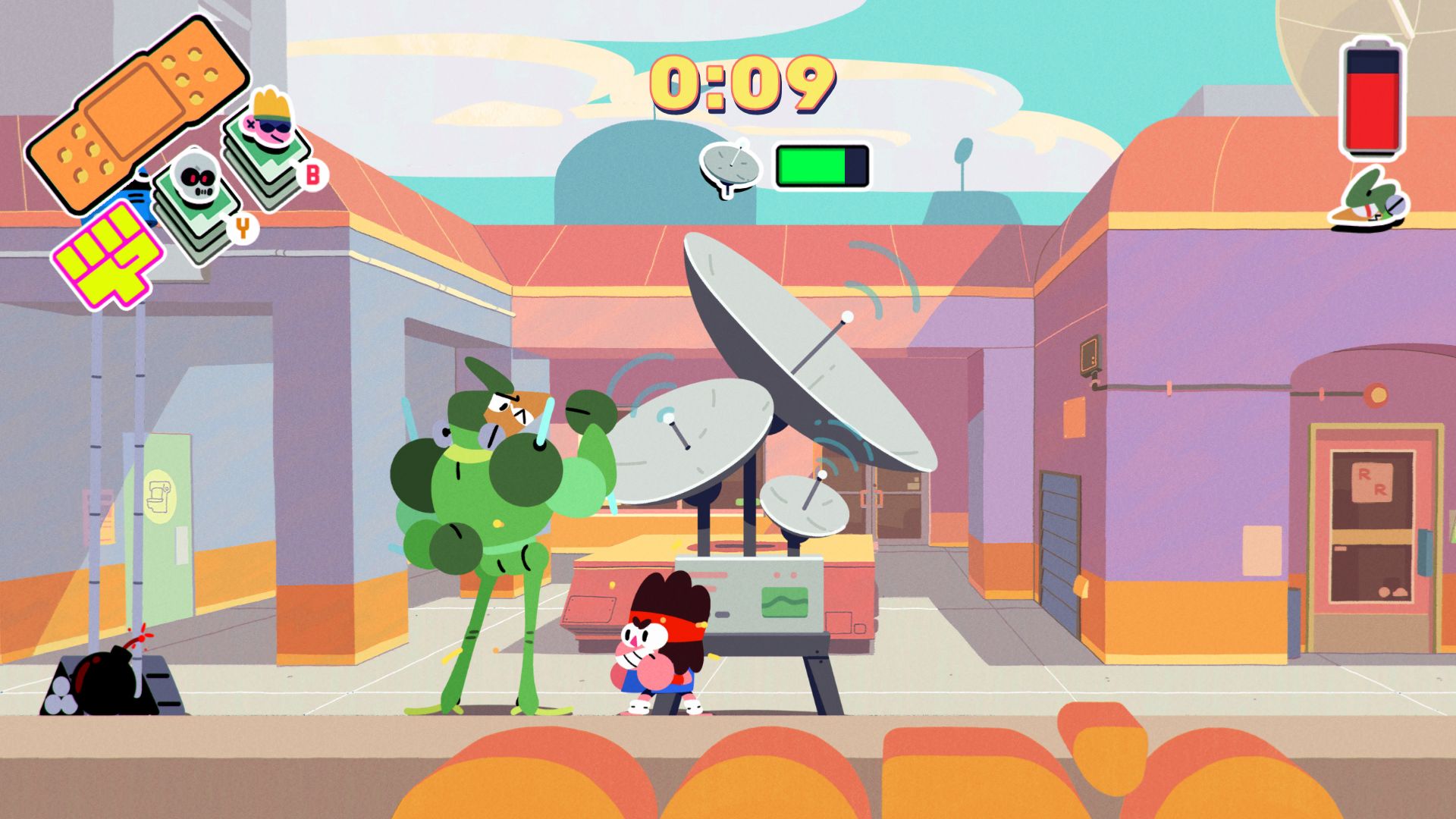 And with these RPG elements comes the biggest flaw of the game, that in the fact that the game’s length seems to have been stretched out to that of a six-to-eight-hour small RPG. As a two-to-four-hour brawler, there was easily enough content to create a good burst of entertainment, but in trying to amplify things bigger, flaws either get amplified or created. The enemy variety runs out after a while, making the fighting monotonous and littering the world with crates of Boxmore enemy encounters you’ll end up skipping, the fetch quests become actual chores that begin to grate, the excuse plots for quests become tedious and have you beginning to wish for something deeper in the story, and the whole experience tends to drag on and on, right down to the final boss with an unnecessary three stages (only the first of which is a challenge). The end result is that you’ll have basically seen everything the game has to offer by the halfway point, so why keep going after that?

Before we end things, though, I want to bring up one unique aspect of OK K.O.! Let’s Play Heroes that deserves special mention: The secret codes. As mentioned earlier, the show and the game were basically developed in tandem, and one of the extra benefits of this is that the team behind the cartoon used this opportunity to hide several three-symbol codes into virtually every episode for eagle-eyed viewers to spot (somewhat similar to the cipher keys and cryptograms in Gravity Falls). These codes can be punched in on the Pow Card machine in-game, unlocking pieces for new Pow Cards and boosters for other cards that make their Powie Zowie attacks more powerful.

It sounds like a clever idea on paper, but in the game proper, the unlockable cards never feel necessary. At least one major side character in the game (Brandon) has his card locked behind these codes for seemingly no reason, no mention of the code mechanics or hints concerning them are ever given in-game, and while these are secret codes, sure, the secret may have worked a little too well because of this. See, the achievement for collecting all of the game’s Pow Cards includes the ones earned by inputting the codes, and – I kid you not – as of the time of writing this, ZERO PERCENT of the game’s Xbox One players have earned the achievement. And only one percent of players have unlocked it on Steam, though whether that’s through hacking, brute force, or actually discovering the codes needed but wickedly not telling anyone else about them, we may never know. 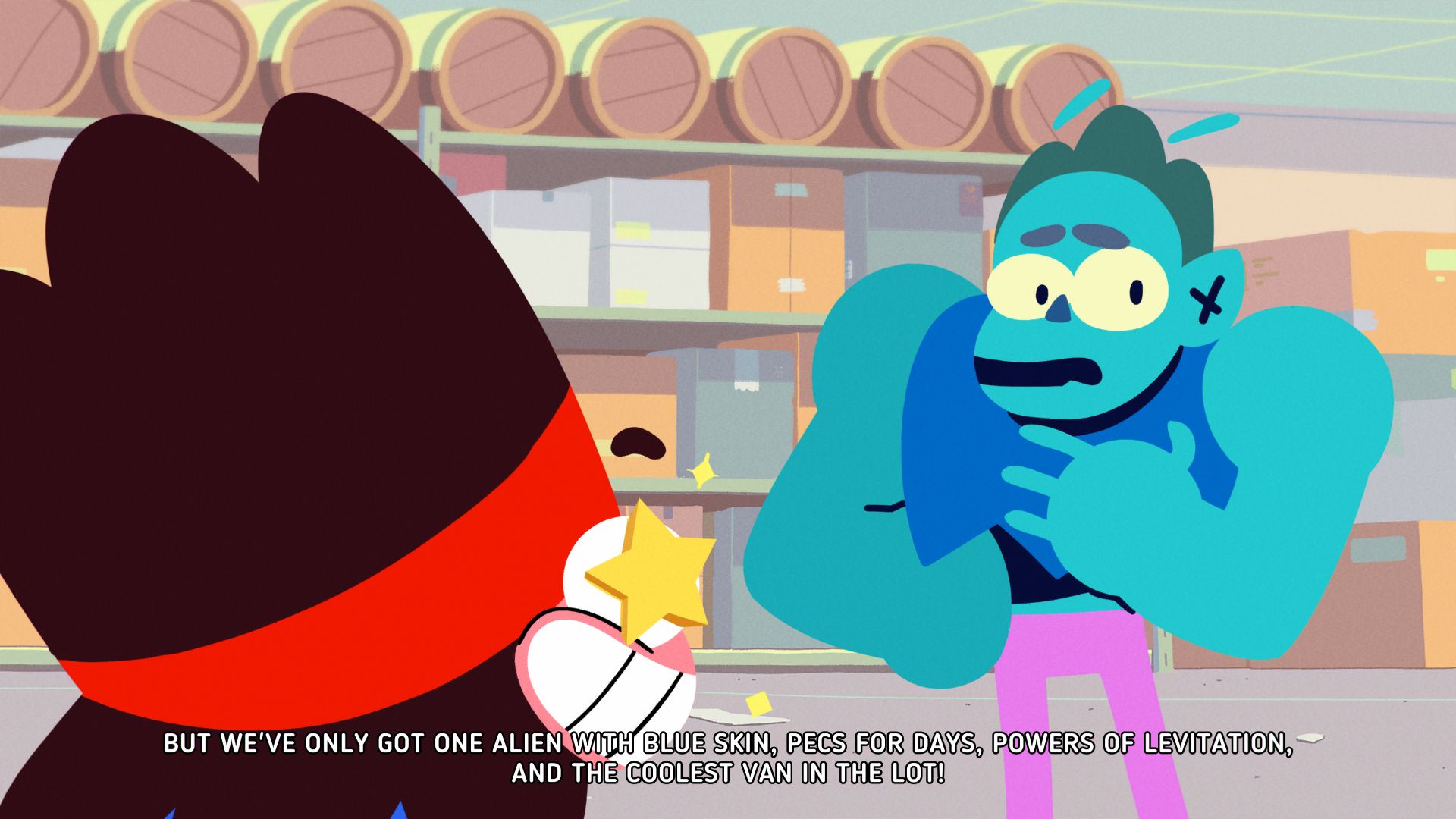 OK K.O.! Let’s Play Heroes has all of the makings of an astounding beat-’em up thanks to its fun and action-packed combat, as well as a style and flavor in all areas that perfectly matches the show and is guaranteed to please fans. Sadly, it does not have the makings of an astounding RPG, though, and the bare-bones quests and overall story that goes on for too long renders the whole deal overly repetitive. Fans of the animated series may still get a kick out of it for a while, but in the end, it may just be better to marathon several episodes in its place.