With the announcement of SNK Heroines Tag Team Frenzy, fighting game fans — specifically SNK and King of Fighters fans — may have noticed this new Heroine-centric tag-team fighter is way different from what they’ve come to expect in recent additions to SNK’s long-running history of producing deep, competitive fighting games. That’s not to say SNK Heroines is a step in the wrong direction. So far, it’s shown itself to have a deceptively high level of depth despite how it looks. Sure, the entire concept of featuring just the female characters in a series of fighting games isn’t new, neither is putting them in even less clothing than usual and having them do battle with each other. This rosy, bright-colored aspect to SNK Heroines does add into how the game actually is, mechanically. It’s simple to behold, there isn’t a ton to it at first, and as with most modern fighting games, it provides a historically low beginner’s skill floor. It’s safe to say after some hands-on time with the game that past the dress-up, characters who are visibly confused and embarrassed to be in the game, and the situational comedy, there’s a discrete fighting game here.

So far, the game is easily more approachable than something like King of Fighters XIV. Many commands are simplified to single buttons here. To get an idea of the gamepad experience, grabbing, blocking and super attacks (called Dream Finishers here) are all single button presses. This, of course, includes the basic light, medium and heavy normal attacks — with heavy attacks doubling as character-specific special moves. There is no crouching and every heavy attack uses meter. Furthermore, specials, combos, different normal attacks and even Dream Finishers only seem to require a single directional command, if at all. At least for the characters revealed so far, there does not seem to be any quarter-circles, shoryuken-movements or double-taps. Input-wise, Heroines isn’t looking to be confusing, instead maintaining a separate but familiar layer of depth — comboing. Combos are very present here, especially the variety that spends equal time interchanging from ground and air juggling, only to end with a colorful Dream Finisher. This allows complete newcomers, fighting game fans or not, to press buttons and see things happen without hitting hard animation blocks or stops. There are enough tools for button-mashers to get an idea of how the game is meant to work at higher skill levels, which is also something we’ve seen in recent fighting games expecting newcomers like Dragon Ball FighterZ. That said, the moment after the initial familiarization of what button does what leads to the inevitable initial deep-end of learning a fighting game: what combos off of what? 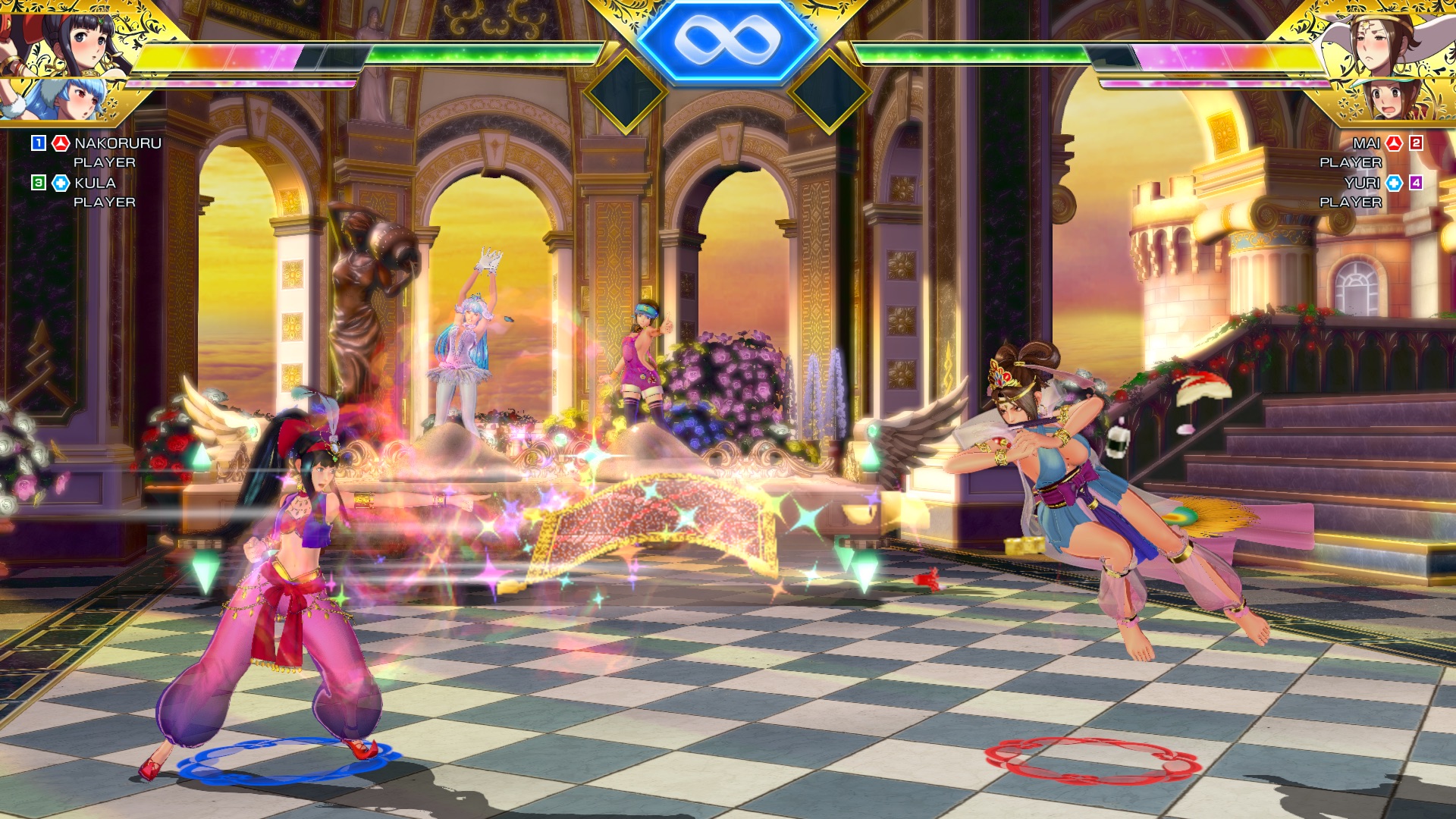 SNK Heroines keeps how combos work from plenty of other 2D fighting game contemporaries. Only certain moves link with other ones and the timing is reasonably tight. This is good news overall, since familiarizing with a character is expedited with the simpler inputs and more advanced maneuvers, like rolling by pressing a direction while blocking, translate across different characters. Learning combos is still the same as any fighter as it is here; getting good to the point of diminishing the opponents HP in one combo will still take its fair share of practice. As with the inputs, the game is actually still a bit easier to pick up even on the combo-end. Sure, long combos will take learning, but there isn’t a need for a mix-up game in the sense one might see in other fighting games. That is to say, there is no crouching so there’s no low-block and likewise, no low hits. Blocking itself doesn’t have any sort of endurance gauge, so the guard breaking present in King of Fighters XIV doesn’t seem to exist here either.

Grabs are the de facto answer to a blocking opponent, along with the occasional cross-up (a hit from behind) and so combos themselves don’t get as complicated as they would in a game where players need to hit low and then high interchangeably to keep a long combo chain going. Likewise, pressuring a blocking opponent into the corner is simpler here too with a more distinct rock-paper-scissors situation of block-beats-hits-beats-grabs-beats-block. This does not mean SNK Heroines has easy combos either, as experienced players will keep the damage coming by taking the combo to the sky, back down to the ground and into the corner. This, however, is more or less where SNK Heroines stops being relatively the same as its 2D fighter contemporaries. 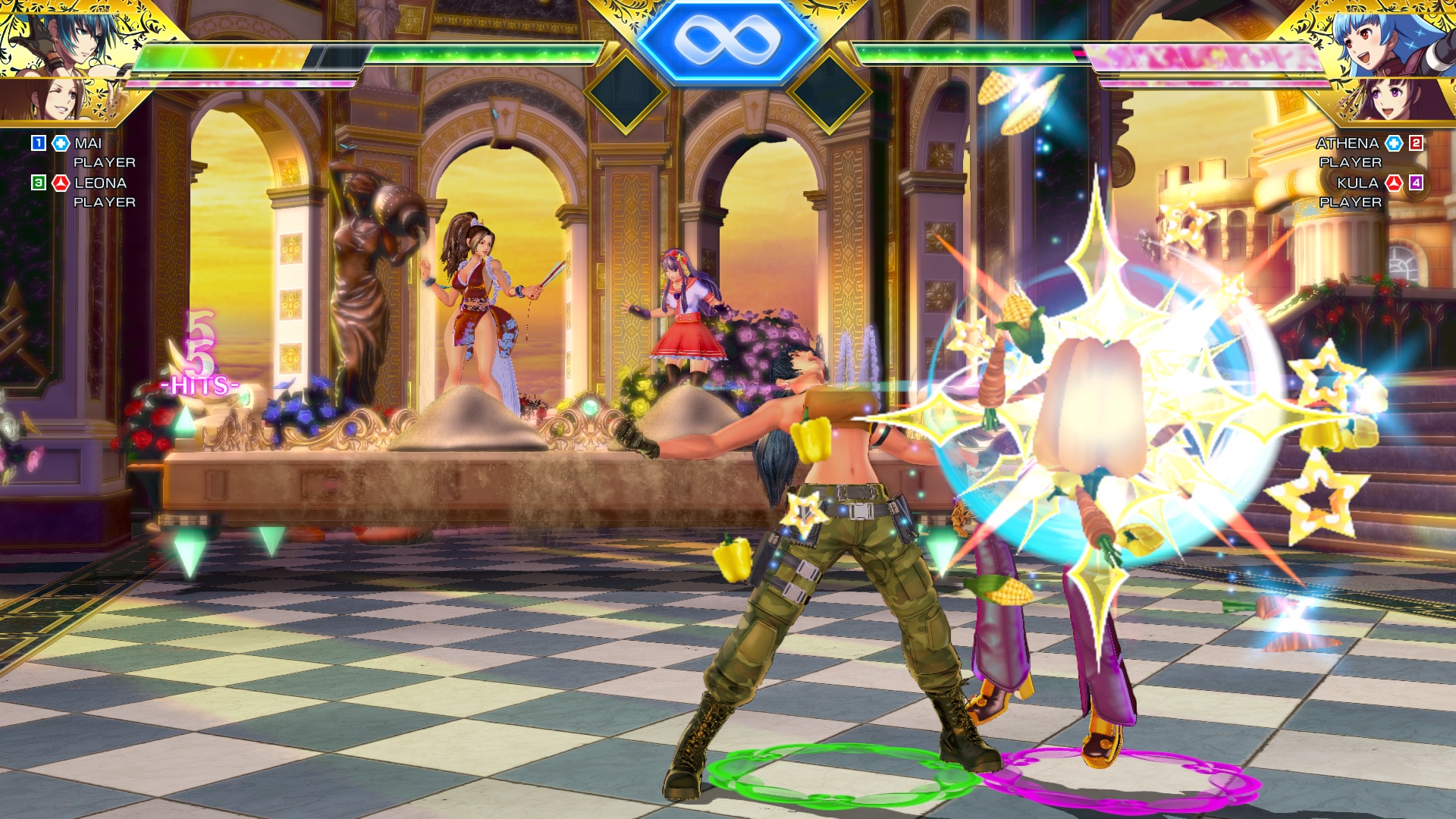 There are items in this game. Players can grab them in the stage by hitting them and they’ll get a random usable item Mario Kart-style. These items range from buffs, to large stunning moves (which do friendly fire) to straight-up banana peels. Interestingly, there are also small character-height structures that serve as temporary walls. To put it simply, these items can turn a match around. For example, a player can get an item that gives them EX mode — essentially a buff in every sense of the word, they could get an item that heals or they can work their opponent far enough to a corner and use an item that walls them off from the rest of the stage. In 2D fighting games, corners are the worst place to be on the defense. You have nowhere to fall backwards, so an opponent that hits you has an easier time hitting you again, without needing to worry about how far away the hit pushed you. Now imagine there was a wall blocking you from leaving the corner. Items allow for far better pressure opportunities than fighting games usually have. They can serve as comeback chances and momentum-amplifiers. As it is now, these items seem nice to have. This is compounded by the fact that, as a tag-team game, SNK Heroines does not have characters with their own HP.

Instead, the two characters players can control in battle share the same HP, making the character switching even more a matter of swapping tool-sets than it usually is. What’s more is players can only be finished with a Dream Finisher, which requires a considerable amount of special meter, something both characters actually do not share in battle. HP also shares the same space as the special meter, meaning as HP goes down, the special meter gets longer. This is, of course, for comebacks. Players gain better access to high damage attacks the closer they are to KO. But interestingly, the match actually starts with every character having full special meter. They’ll need it too, because when they’re at risk of being KO’d, their HP actually turns red — an indicator for the opponent as well. On one hand, having red HP means it’s clear the opponent is going to go for a Dream Finisher, if anything making them particularly more predictable since only special attacks (heavies) can combo into Dream Finishers. On the other hand, since meter only becomes sparkly when there is enough to perform a Dream Finisher, both players can also see when the other is literally incapable of performing a KO. 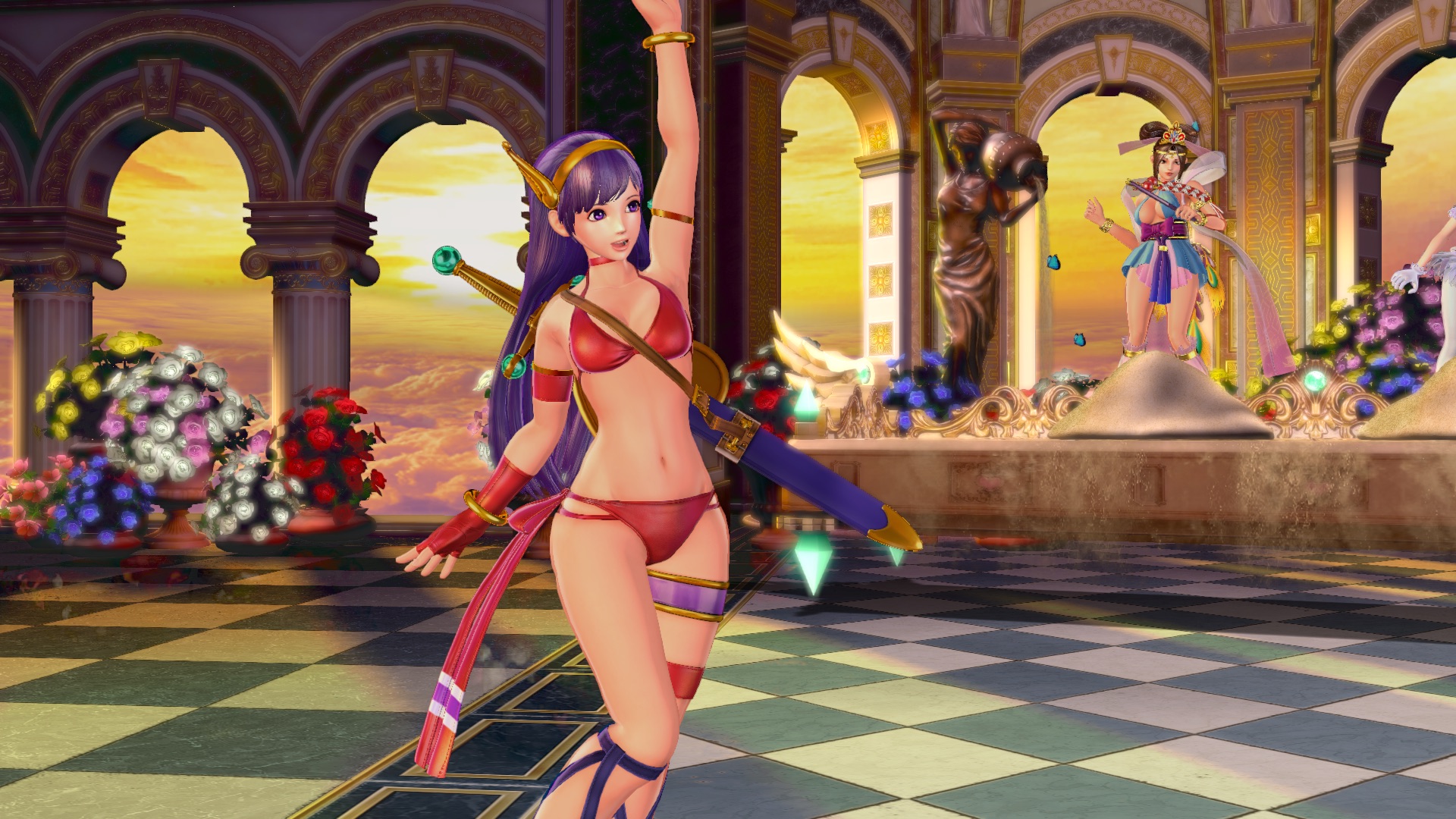 It all seems to work relatively well. There is abundantly more information present to tell a new player what do to than in a Street Fighter of even a King of Fighters game, and the opportunities to comeback or maintain pressure open things up quickly for new players to explore ways to improve. Items are a double-edged sword here, as they always tend to be. Sure, there seems to be something here that keeps items from being too convenient all the time, or vice versa, but it’s a scary line to toe when random items are in play during a competitive game. That said, they have yet to distinctly demonstrate an unwelcome presence, since an opponents item is never a secret. Some odd options are also present in the game so far. Players can use a team of two of the same character, which due to their shared HP bar, only seems to be a means of gaining access to more special meter to use heavy attacks and Dream Finishers sooner. The special meter actually only seems to recharge on its own, which can actually diminish a single character’s ability to maintain an offensive over time. This can lead to switching characters as a means of finishing the match, rather than as a tactical move to regain or maintain the upper hand. Of course, fighting gamers like their options and SNK Heroines has them in spades.

SNK Heroines Tag Team Frenzy takes many risks, and frankly, may have trouble finding its audience. It’s fun enough so far, but its specific mixture of different new mechanics, format and presentation may not connect with many of the fighting game crowd. It has a good foot in the door for more casual crowds while also containing enough depth for veterans to dig into. Whether it’ll be a successful gamble is anyone’s guess, but SNK Heroines Tag Team Frenzy may have as much working for it as it does against it. Either way, things will become more clear when the game comes out this Summer for PlayStation 4 and Nintendo Switch.